Accessibility links
Loathed By Farmers, Loved By Ancients: The Strange History Of Tiger Nuts : The Salt One of the worst weeds in the world had its start as an ancient and valuable tuber used for food and medicine. Now tiger nuts are making a comeback in the health food aisle.

Loathed By Farmers, Loved By Ancients: The Strange History Of Tiger Nuts

Loathed By Farmers, Loved By Ancients: The Strange History Of Tiger Nuts 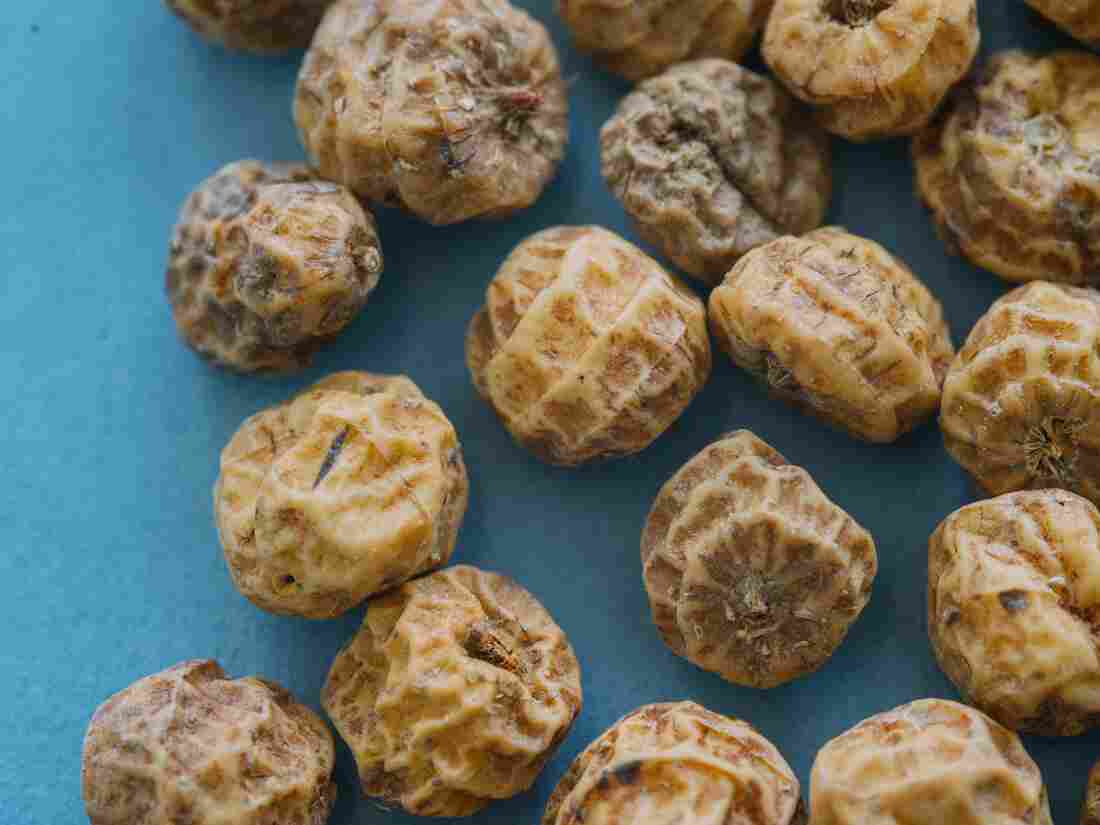 The earliest records of tiger nuts date back to ancient Egypt, where they were valuable and loved enough to be entombed and discovered with buried Egyptians as far back as the 4th millennium B.C. Now, tiger nuts are making a comeback in the health food aisle. Nutritionally, they do OK. Matailong Du/NPR hide caption 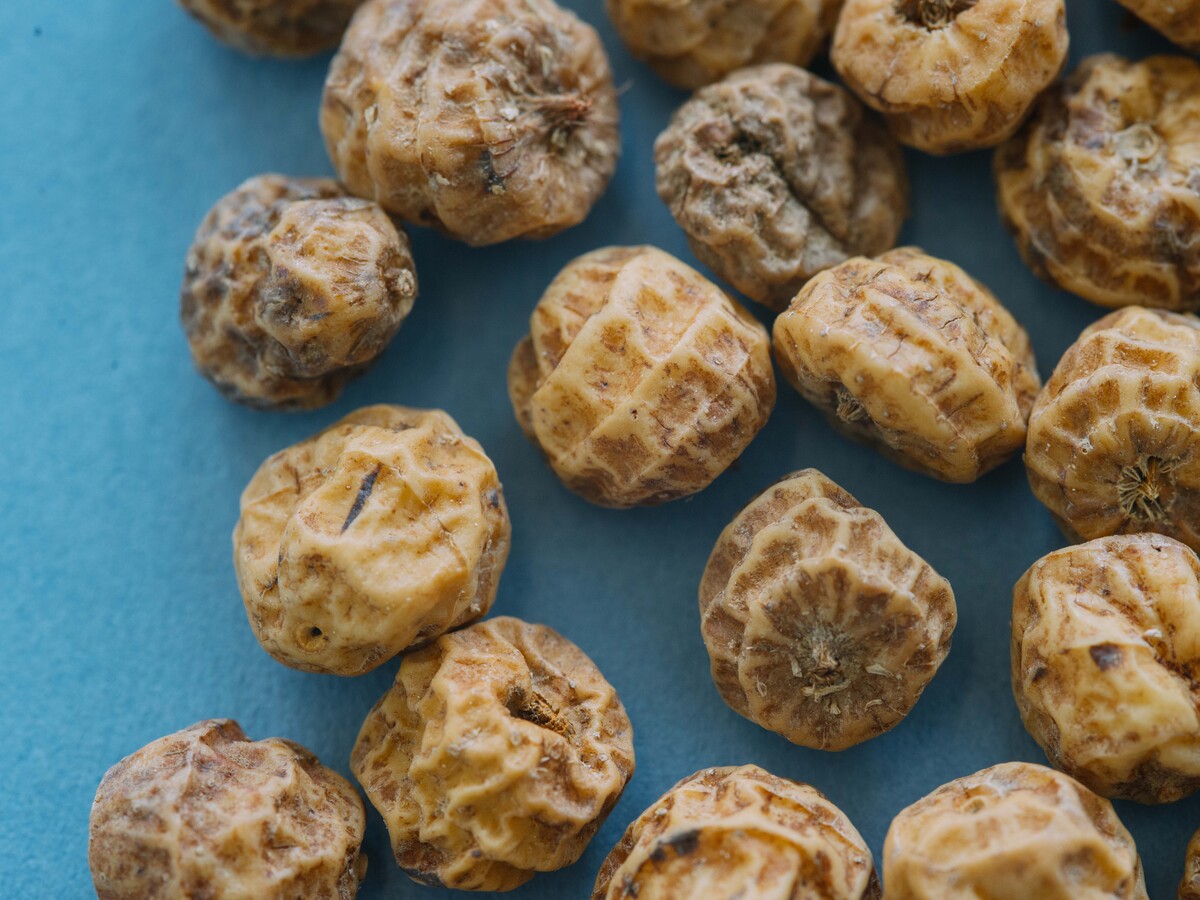 The earliest records of tiger nuts date back to ancient Egypt, where they were valuable and loved enough to be entombed and discovered with buried Egyptians as far back as the 4th millennium B.C. Now, tiger nuts are making a comeback in the health food aisle. Nutritionally, they do OK.

Take a look at some lawns this spring. You might see something that looks like a crown of thin leaves and spikey, yellow flowers shooting over the grass, particularly if you live in the South. If the stems are triangular, you've just found a sedge. Dig it up. If it's the right kind of sedge, clinging to the roots will be a few chewy, brown, marble-sized tubers called tiger nuts.

The plant is called yellow nutsedge or Cyperus esculentus, and it's one of the absolute worst weeds in the world. It wreaks havoc on gardens and crops and causes millions of dollars of agricultural damage every year. But it's also been cultivated for millennia, and yellow nutsedge as a crop, medicinal plant and weed has a very long, strange history with humans.

Today, tiger nuts have been getting a fair amount of attention in health food aisles. The tubers are becoming popular among paleo dieters and lauded as a "superfood." An organic foods press representative named Ludovica Vigliardi Paravia emailed me to say, "what's nuts is that TigerNuts are finally making a comeback, emerging as the #1 HEALTHY REAL HUMAN FOOD! [sic]"

Real human food? I was intrigued. The company sent some here to NPR, where they arrived in desiccated form.

Dried, the tubers resemble shriveled, mummified knuckles. That's somewhat fitting, because the earliest records of tiger nuts date back to ancient Egypt, where they were valuable and loved enough to be entombed and discovered with buried Egyptians from the 4th millennium B.C. to the 5th century A.D. In the tomb of Vizier Rekh-Mi-Re', a high-ranking ancient Egyptian official buried in the 15th century B.C., a wall painting shows workers shoveling heaps of the stuff while a scribe counts the amount.

On this wall painting in the tomb of Vizier Rekhmire, a high-ranking ancient Egyptian official from the 15th century B.C., the first two rows show peasants measuring and preparing tiger nuts. Courtesy of www.osirisnet.net hide caption

What records remain from antiquity suggest that tiger nuts were used medicinally and eaten as treats. The roasted, crushed tubers were eaten with honey, according to work by Moshe Negbi, a former botanist at the Hebrew University of Jerusalem. Theophrastus, an ancient Greek botanist, wrote about boiled, sweet tiger nuts in Historia Plantarum. By the 13th century, records from present-day Valencia, Spain, show that tubers were being used to create a drink called horchata de chufa, "an ancestor of the horchata drunk nowadays," according to researchers at the Polytechnic University of Valencia.

But yellow nutsedge's reputation as a valued crop began turning in the 19th century. In the Manual of the Botany of Northern United States 6th ed., author Asa Gray wrote in 1889 that the plant was "becoming a pest in cultivated ground."

There doesn't seem to be any record that ancient people saw yellow nutsedge as a weed, but it's certainly far better at destroying crops than being one, according to Michael Defelice, a retired weed scientist who's written about the plant. In agricultural fields, yellow nutsedge can grow quickly and shade over other crops.

"The plant just chokes up everything around it. It's really hard to kill," Defelice says. It's considered a noxious weed or pest almost everywhere it's found in the world, including its native range in Africa.

And tiger nut has never really enjoyed widespread popularity or fame in the same way other ancient Egyptian crops, like barley or emmer wheat, have. Defelice says that's because it's just not economical.

"It's not a great volume producer. You wouldn't get a lot of food per acre. That's why it remained a niche product," he says. "In Egypt, there weren't lots of options in those ancient times. So they worked with what they had. I think a really telling feature is that they coated them in honey."

People enjoy the taste, though. Presumably, people continued cultivating and eating tiger nuts all these thousands of years. They're still eaten in parts of Africa, and horchata de chufa is still a refreshing treat in Valencia. Granola, smoothies and flours can all be made with tiger nuts as well. These are all being sold as part of an attempted tiger nut renaissance in the health food industry.

It doesn't taste terrible. When we tried them at NPR, the greatest endorsement a staff member had for the dried, raw tiger nuts was a thoughtful, chewed over "alright." The tuber has a light almond taste and smell, with a surprising crunch after being rehydrated. After a few seconds of hard chewing, the tiger nut falls apart into what feels like the frayed end of a rope in your mouth. It is extremely fibrous.

Why or how health food companies seized on tiger nuts is somewhat unclear. Some scientists believe that certain pre-human hominids ate them as a part of their diet 2 million years ago, particularly because modern baboons seem to enjoy them. That may have spurred popularity among paleo dieters. It's not really a "superfood." But if you like the taste of faintly sweet, nutty things and making your jaws work for a snack, this might be the thing for you.