Accessibility links
Keeping Bees Safe: It's A Ruff Job, But This Doggy Detective Gets It Done : The Salt Mack is the newest addition to the Maryland Department of Agriculture's apiary inspection team. He uses his superior sniffer to find hives infected with a contagious disease that kills bee colonies. 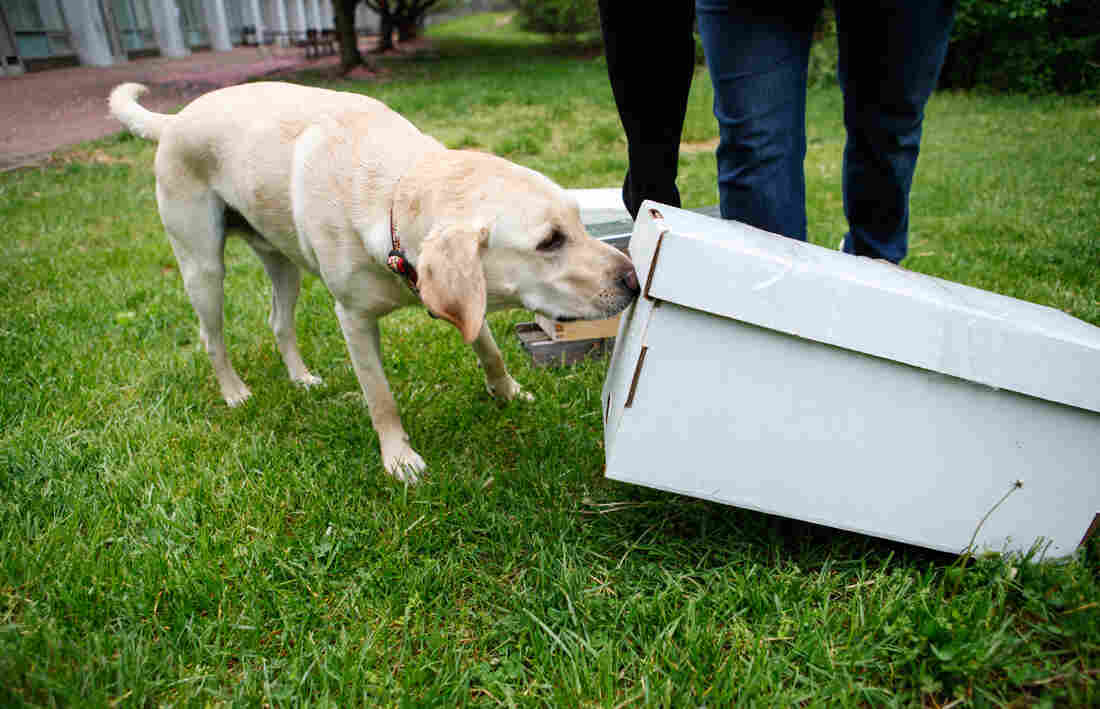 Cybil Preston, chief apiary inspector for the Maryland Department of Agriculture, does a training run with Mack: She sets up fake beehives and commands him to "find." He sniffs each of them to check for American foulbrood. He has been trained to sit to notify Preston if he detects the disease. Morgan McCloy/NPR hide caption 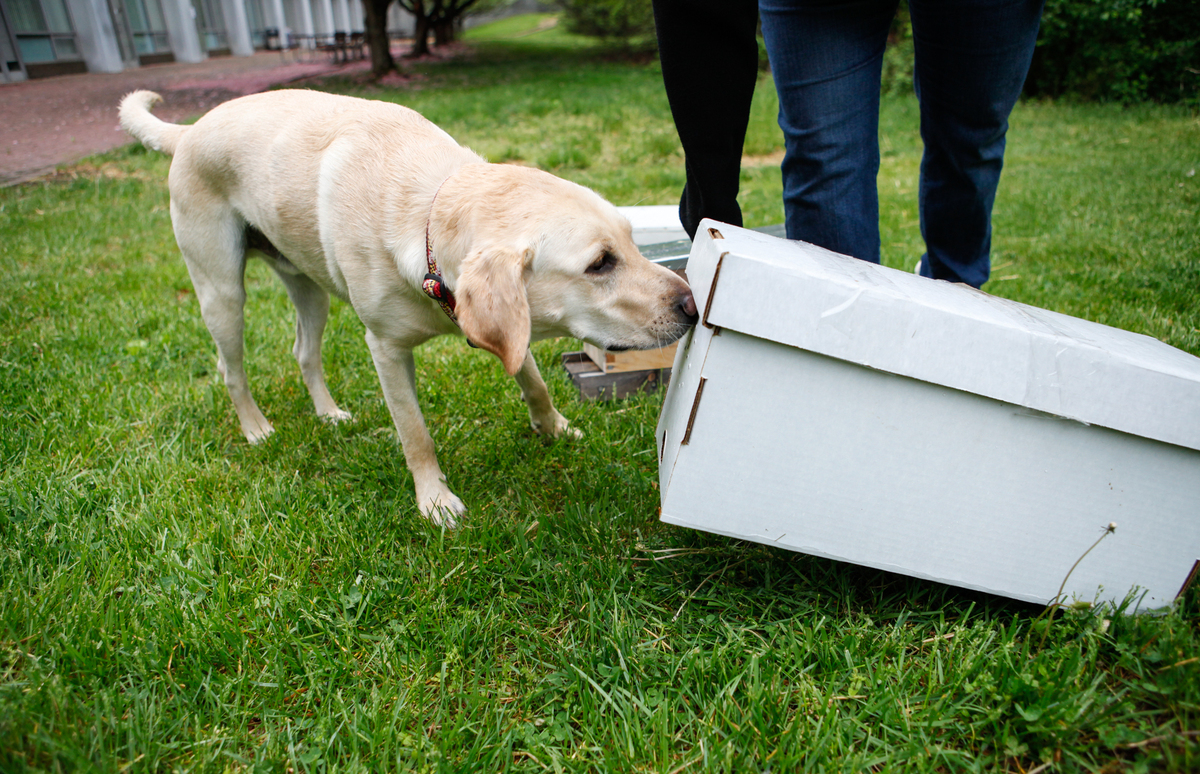 Cybil Preston, chief apiary inspector for the Maryland Department of Agriculture, does a training run with Mack: She sets up fake beehives and commands him to "find." He sniffs each of them to check for American foulbrood. He has been trained to sit to notify Preston if he detects the disease.

The newest apiary inspector at the Maryland Department of Agriculture has four legs, golden fur and a powerful sniffer.

"Maryland has a thriving beekeeping industry, and most of our beekeepers have thousands of hives that travel from state to state for pollination," explains Preston. "It's our job to make sure that infected hives don't cross state lines."

The Maryland Department of Agriculture has had a "bee dog" on staff since 1982 and is believed to be the only state agency in the nation using a dog to detect AFB.

In Australia, a black Labrador named Bazz has taken on the role of apiary inspector and reports to work wearing a custom bee suit to protect him from getting stung.

Alice Whitelaw, co-founder of Working Dogs for Conservation, a nonprofit organization in Montana that trains dogs to sniff out invasive species, isn't surprised that a dog is helping prevent the spread of a deadly bee disease.

"Combined with all of the other tools we have, dogs are a really good application for a lot of conservation issues," she says.

Mack is the fifth dog to hold the position. His predecessor, a black Lab named Klinker, retired last year.

"The program is a unique asset to our department and we didn't want to let it go," Preston says.

To keep a dog on staff, Preston set out to find and train a new canine apiary inspector. A member of her local beekeeping group told her about Mack. The dog was living in a garage and needed a new home — along with some manners.

"He was quite rude," Preston recalls.

But Mack proved to be a quick learner. 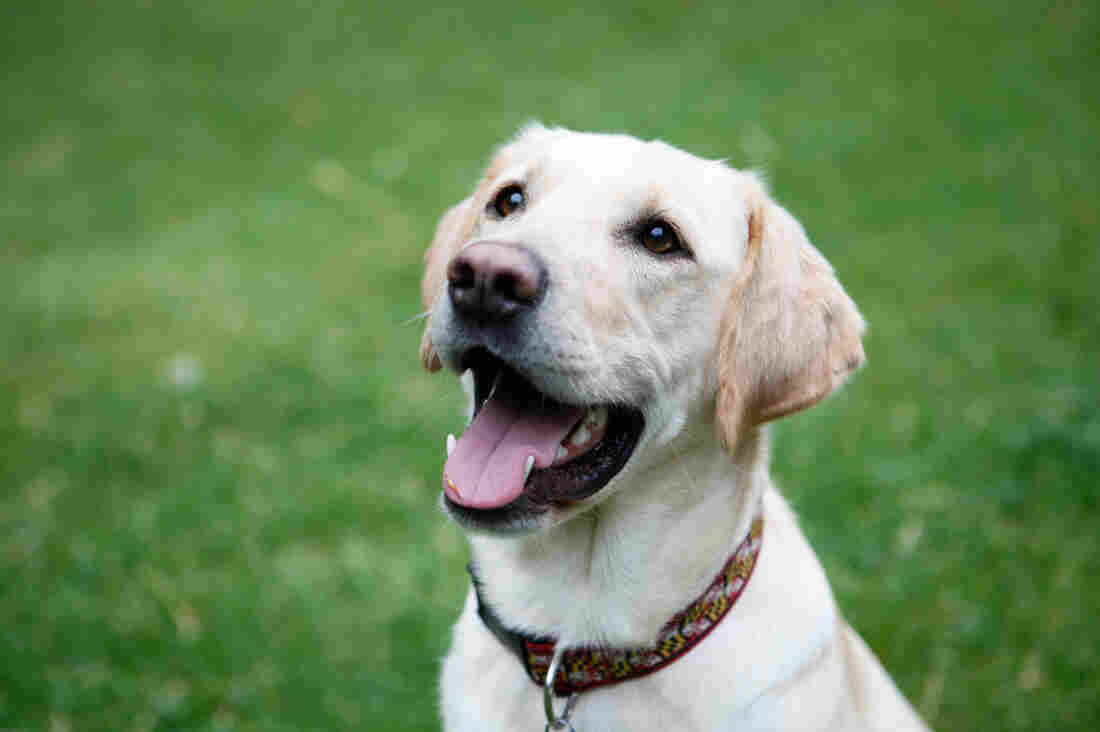 Mack works for the Maryland Department of Agriculture to sniff out American foulbrood in bee colonies. He underwent a 14-week training program to get certified as an American foulbrood detection dog. Morgan McCloy/NPR hide caption

Preston taught the dog basic commands and then partnered with the team at the Maryland Department of Public Safety and Correctional Services to complete a 14-week training program to have Mack certified as a detection dog.

In the field, Mack works from November to April. When temperatures are cooler, the bees are less active, making Mack less apt to get stung. He moves from beehive to beehive, sniffing each one for the distinct odor of AFB infestation. If he smells AFB in a hive, he sits to alert Preston that a manual inspection is needed.

Using his nose, Mack can inspect 100 hives in 45 minutes. Preston must open each hive to perform a visual inspection, slowing her down; she can inspect 10 hives in the same amount of time.

"If we want to be efficient, we need a dog," she says.

"Every hive Klinker alerted on was 100 percent correct and certified by the USDA as confirmed AFB," she says. "It would be a lot more prevalent if we weren't doing dog inspections."

Hives were dormant when Mack started doing inspections last fall, so his success rate isn't clear yet. In field trials, he was 100 percent successful in identifying AFB.

Hive inspections are the first line of defense in preventing the spread of AFB.

When the disease is confirmed, the antibiotic Terramycin can be used to control the symptoms, but it doesn't destroy the spores; hives infected with AFB are frequently destroyed.

In Maryland, having a canine apiary inspector is an economical option for performing greater numbers of inspections and improving detection, says Preston, who owns Mack and pays for most of his care. (After Mack earned his AFB certification, the state agreed to pay for his vet bills.)

The bonus to having a dog on the team: it brings important attention to control the spread of the deadly disease.

"A lot of beekeepers ... hear about the dog and call us out to inspect their hives," she explains. "These kinds of relationships are essential for keeping instances of AFB down."