Accessibility links
Why Chobani Gave Employees A Financial Stake In Company's Future : The Salt Workers at the yogurt-maker got a potential windfall when the company said it would give them shares that could be worth up to 10 percent of the firm. It reflects a rising trend in employee ownership. 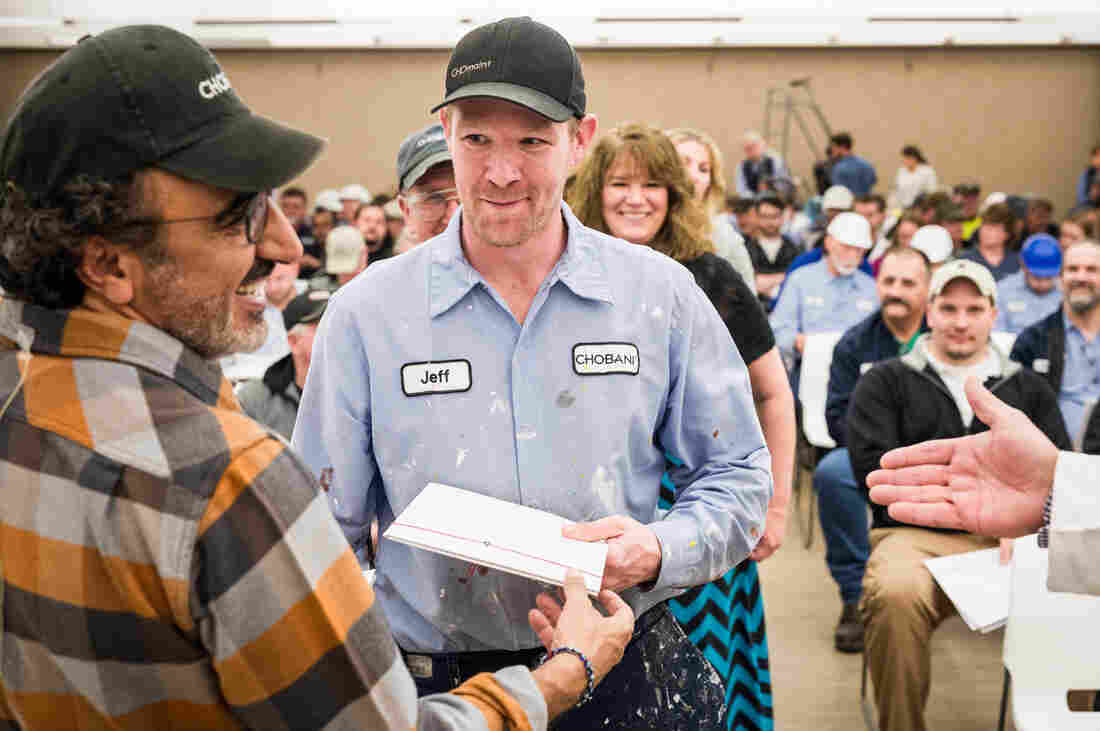 Chobani CEO Hamdi Ulukaya (left) presents an employee with shares of the company on Tuesday at the Chobani plant in New Berlin, in upstate New York. Johannes Arlt hide caption 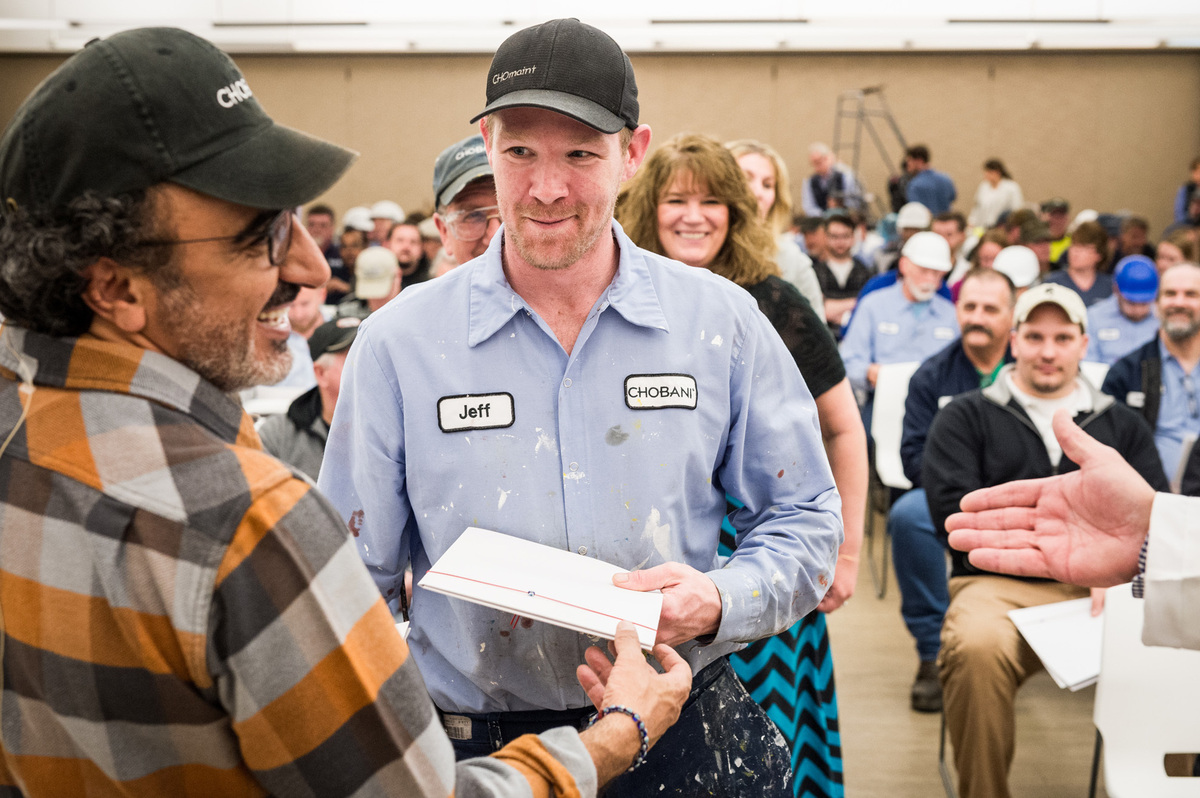 Chobani CEO Hamdi Ulukaya (left) presents an employee with shares of the company on Tuesday at the Chobani plant in New Berlin, in upstate New York.

It's been a good week for employees of Chobani. They learned that they could eventually own about 10 percent of the rapidly expanding Greek yogurt company. That could potentially make millionaires of some workers, if the privately held company is sold or goes public.

It's a grand gesture, and reflects a rising trend in employee ownership.

Chobani's meteoric rise began in a defunct old Kraft yogurt manufacturing plant in upstate New York. Founder Hamdi Ulukaya's only experience in the dairy business was that his mother made delicious strained yogurt in his hometown in Turkey.

Now, a decade later, the company has reached $1 billion in annual sales. It has two factories, 2,000 employees and is worth an estimated $3 billion.

Ulukaya — still Chobani's majority owner — told employees on Tuesday to think of the grants as a pledge to expand the company even more.

"We used to work together; now we are partners," he told workers at the company's facility in New Berlin, N.Y. 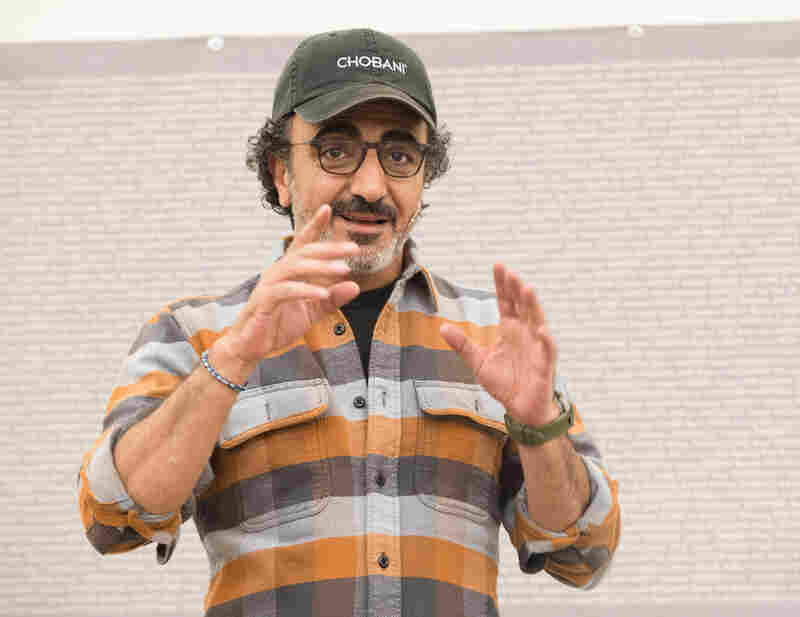 Ulukaya, who also founded Chobani, personally determined the shares each employee received, based on each one's role and tenure at the company. Johannes Arlt hide caption

Ulukaya is outspoken about corporate civic duty. Ten percent of Chobani profits go to charity. One-third of its workforce is made up of refugees. And an employee ownership grant was always part of Ulukaya's dream plan.

Still, his announcement came as a surprise to almost all employees.

"We built something; now we're sharing it," Ulukaya said.

Employee stock ownership is not all that unusual, especially among technology firms. Food companies like Starbucks and Whole Foods offer stock grants.

Corey Rosen, of the National Center for Employee Ownership, says employee ownership takes many different forms, and in a growing number of companies, workers own the firms outright.

Dairy company Schreiber Foods, for example, is larger than Chobani and is 100 percent employee-owned through an employee stock ownership plan, or ESOP.

Rosen says such plans allow employees to own, control and share in the profits of a company through a trust. Their popularity is increasing, he says, in part because they enjoy large tax benefits and because retiring baby boomers who own companies see it as a good way to transfer ownership. He estimates nearly one-tenth of American workers are part of an ESOP.

"This has kind of been an under-the-radar change in the American economy that's really very significant," Rosen says.

As of August 2015, these were the top 10 largest majority employee-owned companies in the U.S. Click here to see a list of the top 100.

Note: Companies marked with an asterisk are 100 percent employee-owned.

He says when employee ownership is distributed throughout the rank and file, whether through an ESOP or a stock grant program, it has powerful impact on worker culture. Rosen claims company performance improves after they start employee ownership programs, and workers build wealth much, much faster.

"We hear all this discussion these days about economic inequality, and the wage system is really not going to solve that problem very well," Rosen says. "Even if you raise the minimum wage, it's only going to affect a small minority of the workforce."

Michael Gonda, a Chobani spokesman and longtime employee, says granting everyone a piece of Chobani was important to Ulukaya.

"One of the hardest things to do for a program like this, is when you have 2,000 employees that you want to participate in it, is figuring out that allocation," Gonda says. "Obviously, time and role at the company have a huge part to play, but this is a very personal part of the process for Hamdi, and he spent a lot of time going through that."

The company didn't disclose details about the allocations, but the longest-serving employees received the largest shares.

Gonda says there was a lot of hugging and crying at the announcement ceremony.

"There's a very emotional bond and an emotional connection that you don't typically associate with a manufacturing facility, or a yogurt plant," he says.

Now that bond includes a joint financial stake in the future performance of the company.