Accessibility links
At Food World 'Oscars,' Category Sneakily Redefines All-American Cuisine : The Salt Most James Beard awards go to haute cuisine, but one prize recognizes classic neighborhood joints. And increasingly, the winners are immigrants whose cultures haven't yet dissolved in the melting pot. 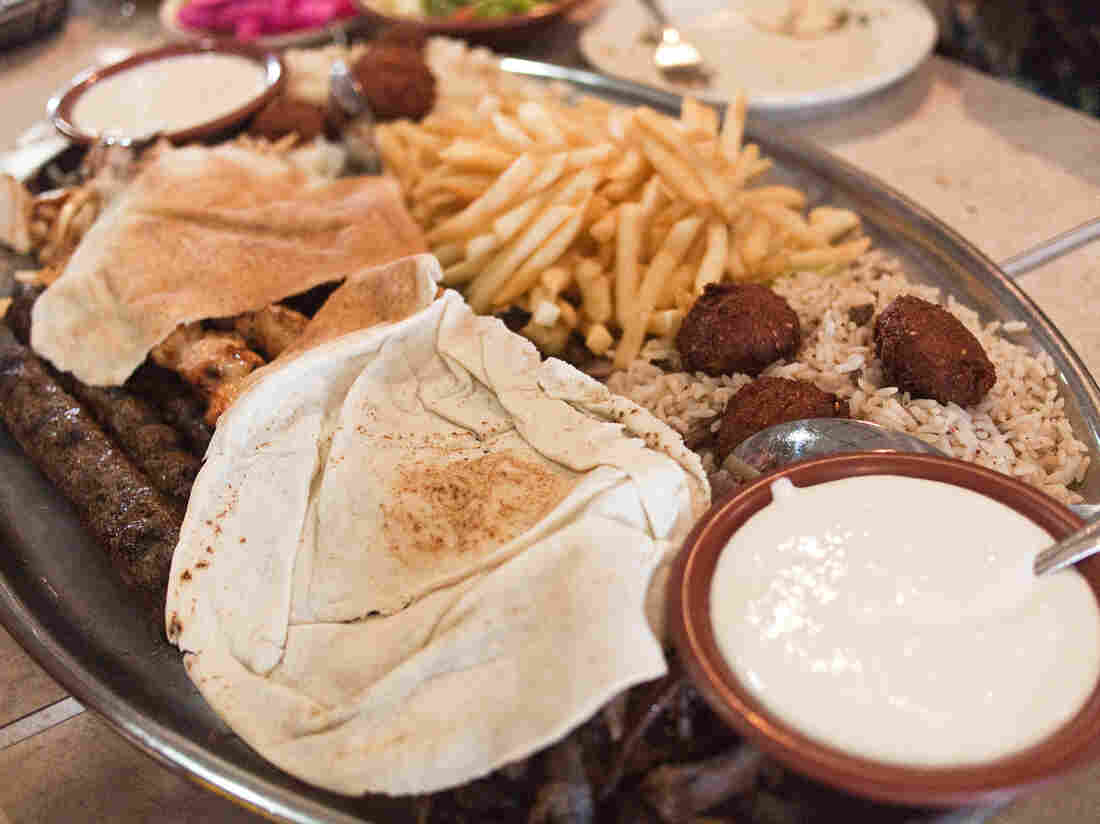 A platter of falafel, kafta, french fries and other fare at Al Ameer Restaurant in Dearborn, Mich. The Mediterranean eatery will be recognized by the James Beard Awards this year in the "American Classics" category. Edsel Little/Flickr hide caption 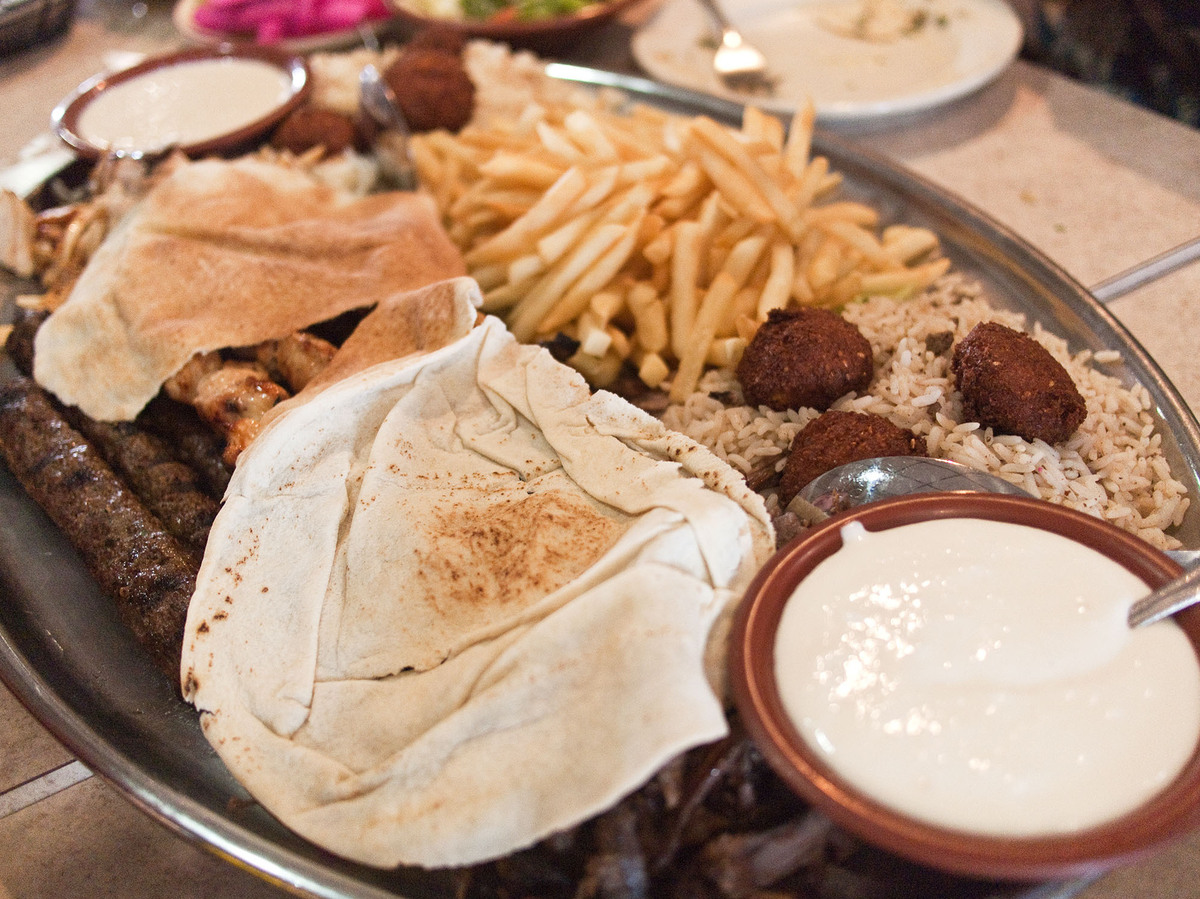 A platter of falafel, kafta, french fries and other fare at Al Ameer Restaurant in Dearborn, Mich. The Mediterranean eatery will be recognized by the James Beard Awards this year in the "American Classics" category.

The food glitterati will gather in Chicago Monday night for the black-tie James Beard Chef and Restaurant Awards, known as the "Oscars of the food world." Most of the categories sound like industry fare: Outstanding Restaurant Design. Best Chef: Great Lakes. Best New Restaurant. Rising Star Chef of the Year. There's not much of interest for anyone outside the foodies and food world orbit. Except, that is, for a sneakily subversive category: America's Classics.

Each year, the JBF restaurant committee selects a handful of eateries from around the country for a range of criteria that have little to do with haute cuisine. When the category began in 1998, the eateries honored were usually humble and predictably American fare: Stroud's, a fried chicken eatery in Kansas City; the Second Avenue Deli in New York City; Durgin Park, a seafood-and-sandwich eatery in Boston's Faneuil Hall; and Joe T. Garcia's, a Tex-Mex place in Fort Worth, were among the first year's honorees.

To be considered for the award, restaurants must have been in business for a decade, be locally owned, show "timeless appeal," and serve "quality food that reflects the character of the community," says John T. Edge, who helps oversee the category for the James Beard Foundation Awards Restaurant Committee.

And while early awards set a price limit for awardees, in an effort to screen out high-end eateries, that has since been lifted. Undergirding it all, says Edge, is the idea that truly "classic" restaurants offer for communities what a shared nightly meal offers families: a way to connect.

When the award began, "it was, in large part, a way to honor a kind of Americana that was grounded in 20th century ideas about what American food culture is," says Edge. Witness the list above: the intersection of Germanic and Southern at Stroud's, a Jewish delicatessen, Northeastern seafood, and an American variant of Mexican food. Although the foods served at each were considered foreign when they were first introduced to Americans, they've long since been considered core parts of an American cuisine.

But in more recent years, since the late 2000s, the category has slowly begun to expand its "Classics" label to include less-traditionally American cuisines, incorporating the food of immigrants whose culture hasn't exactly been dissolved in the melting pot.

In the category's 18-year history, during which 102 restaurants have been deemed "American Classics," only seven have served food that was not European or regional American in origin, and most of those were added in the last years.

The first outlier to be added was Yuca's, a Los Angeles taco shack recognized in 2005. Japanese food acquired the classic designation in 2008, via Maneki's in Seattle, and Chinese entered the list in 2009, with Yank Sing in San Francisco. In 2012, Phoenix, Arizona's Fry Bread House added Native American food to the list, and 2013 saw Frank Fat's, a Chinese place in Sacramento. Last year's list added the Oaxacan restaurant Gualaguetza; and this year's is adding Al Ameer, a Lebanese eatery in Dearborn, Mich.

And that has everything to do with the changing face of America. The category "[is] the tip of the iceberg of what is getting normalized as 'American,' " says Krishnendu Ray, whose recent The Ethnic Restaurateur has helped spur a debate over culinary appropriation. "There is a sense that you cannot make a list anymore of this kind that is only referencing Germanic, Southern and seafood-steak places."

And, says Ray, the nature of a list like this is to be conservative. In reality, Americans across the country have been eating outside of traditionally American cuisines for a long time.

"The awards have a burden to be fair, so that they reflect America as it is now," says Edge. "If you want to define classic American restaurants, that is not some measure defined in some gauzy past, but in this present."

In the high-glitz world of food awards, the category still has its struggles, of course. After years of being given the same opportunity to make a short speech about their award, as do all winners, this year's "Classics" will stay silent in their seats. Instead — as in previous years — a short, JBF-produced video about them will be shown.

While the committee chair couldn't be reached for comment, removing acceptance speeches seems, to some, to be at odds with the award's nobler goals of putting humble restaurants on par with high-end ones. After all, when Willie Mae Seaton, the iconic chef of New Orleans' Scotch House, died last year at 99, it was her 2005 acceptance speech for an America's Classics award that made it into her obituary.

Tracie McMillan is the author of The American Way of Eating, a New York Timesbest-seller, and a senior fellow at the Schuster Institute for Investigative Journalism at Brandeis University. You can follow her on Twitter @tmmcmillan.