Accessibility links
How Mexican Cuisine Was Doing Fusion 500 Years Ago : The Salt In her new cookbook, Mexican chef Pati Jinich explores the many cultures — from Africans to Chinese to French to Lebanese and more — who left their culinary imprint on her native country's cuisine.

How Mexican Cuisine Was Doing Fusion 500 Years Ago

How Mexican Cuisine Was Doing Fusion 500 Years Ago 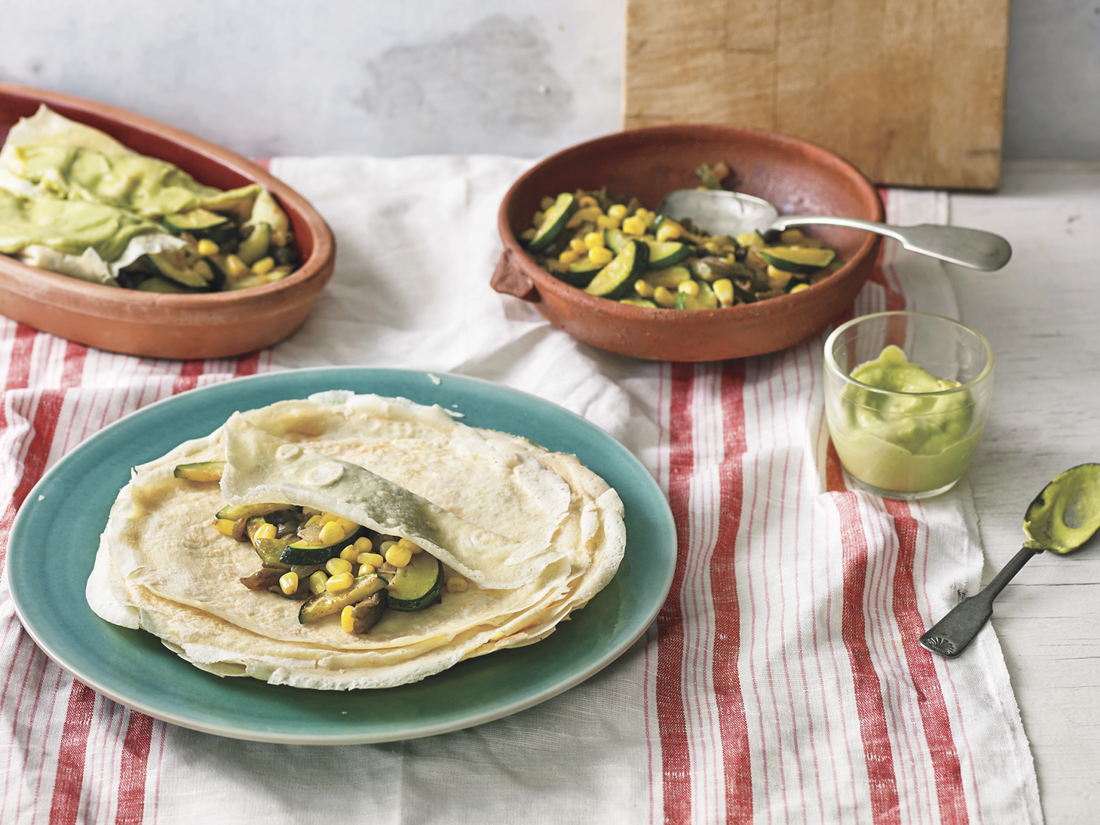 Crepes are a cousin of the enchilada, says Mexican chef Pati Jinich. A vestige of French intervention in Mexico, crepes are now considered classics of Mexican gastronomy. (Above) Jinich's crepe enchiladas with corn, poblano chiles and squash in an avocado-tomatillo sauce. Courtesy of Houghton Mifflin Harcourt hide caption 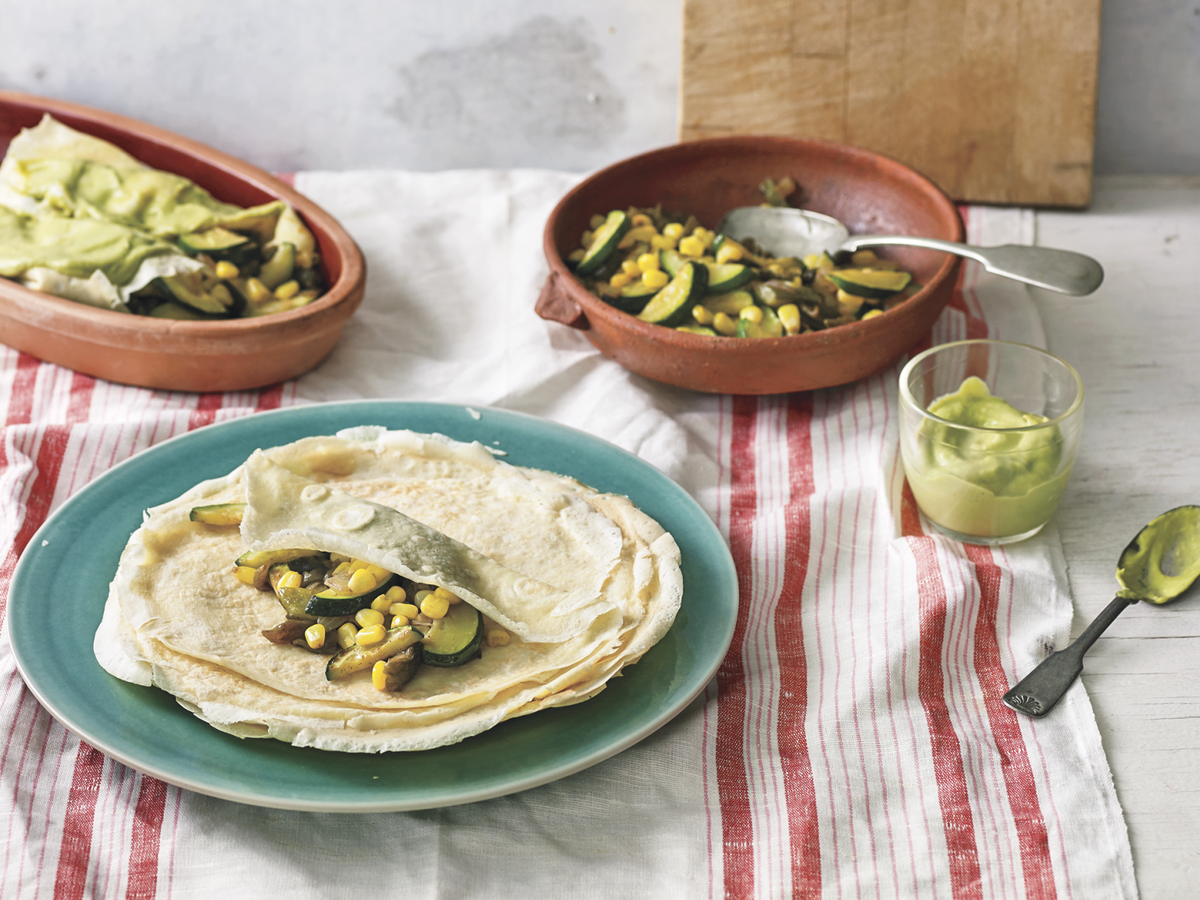 Crepes are a cousin of the enchilada, says Mexican chef Pati Jinich. A vestige of French intervention in Mexico, crepes are now considered classics of Mexican gastronomy. (Above) Jinich's crepe enchiladas with corn, poblano chiles and squash in an avocado-tomatillo sauce.

For an "authentic" Mexican meal, why not cook up crepes?

Crepes are a hallmark of French cuisine. And in the 1860s, French forces invaded Mexico. They came, they conquered, they cooked — then they got kicked out. Cinco de Mayo — a holiday far more popular in the U.S. than in Mexico — commemorates the day in 1862 when a badly outnumbered Mexican army pulled off a minor but symbolically important victory over French forces in the Battle of Puebla. However, it would take another five years before the French left Mexico for good. And during their stay, the French left their mark on the country's cuisine, including beloved crepas, which Mexican chef Pati Jinich likens to a cousin of the enchilada.

Crepes in more savory incarnations (think crepe enchiladas with Swiss chard and potatoes) are among the recipes featured in Jinich's new cookbook. Mexican Today explores not just traditional fare, but the country's evolving cuisine and the many cultures that have influenced it. 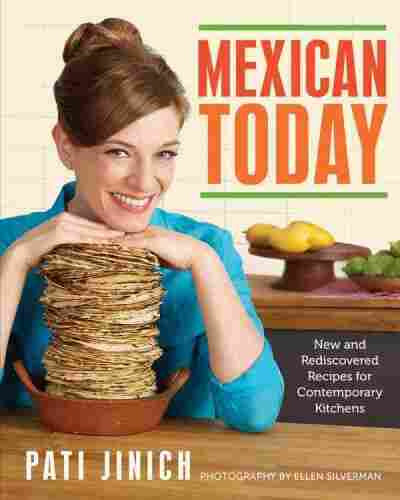 by Pati Jinich and Ellen Silverman

"In Mexico, one of the most traditional desserts is crepas con cajeta," notes Jinich, who was born and raised in Mexico and now hosts the popular cooking show Pati's Mexican Table on PBS. Served with a sweetened, almost nutty caramelized goat's milk sauce and topped with nuts, these crepes have become firmly embedded in the Mexican repertoire. "That's what I used to have for every birthday in Mexican restaurants," Jinich says. "And crepes are like a thousand times French."

Less well-known is the culinary imprint left by large waves of Africans brought to Mexico as slaves during the Spanish colonial era; by Japanese, Filipino and Chinese immigrants (the latter of whom created a Chinese-Mexican fusion food just south of the U.S. border); and by the many Lebanese who arrived after World War I — bringing with them the technique of roasting meat on a turning spit for shawarma. That became a gastronomic ancestor to tacos al pastor, now a signature street food of Mexico City.

Jinich says with her first book, Pati's Mexican Table, she felt much less free to experiment with her recipes.

"I felt as a Mexican in the U.S., I had a duty to the people in my country to do things the traditional way, to showcase things as they really happen in Mexico and to really open a window into the real Mexico," Jinich says. "I didn't give myself much permission to play with new flavors or new combinations or new spins.

"I love that cookbook," she says. But "I felt like I was walking a very fine line because I didn't want to betray Mexicans. I felt like I'd be criticized if I didn't do things a certain way. And at the same time I didn't want to scare away Americans or most people here by doing things that would seem cumbersome or difficult or had exotic or hard-to-find ingredients."

As we've discussed on The Salt, authenticity is a loaded word when it comes to food. Diners often expect a dish to fit a traditional mold. Yet cuisines, like languages, must evolve and adapt or die.

"When you think about it,' says Jinich, "if the word fusion had existed in the 15th or 16th century, all of Mexican cuisine [as we know it today] would be fusion. Because there's no pork, no rice, no milk, no cheese, no onion, no garlic, no oregano, no hibiscus flower, no mango — nothing before the Spanish arrived and the trade with Asia started."

Dishes now considered to be Mexican classics — like crepas a la huitlacoche (a prized corn smut with a deep mushroom flavor) or cajeta crepes — "are a severe intermarriage between New World and Old World," Jinich says.

And culinary "authenticity" is also deeply personal. For many, it comes tangled up in memories of home and identity.

"It's such a relative thing," Jinich says. "For instance, I get very picky with guacamole. If someone gives me guacamole and it's loaded with cumin, I will say that is the least authentic [thing], that is so bad. That's not real guacamole. But who knows? Maybe for someone in San Antonio, that's the guacamole they grew up with that they love."

My Colombian mother, I note at this point in the conversation, is decidedly in Camp Cumin.

"Yeah, I know!" Jinich says, her voice sympathetic over the phone. "A lot of people put it in." (Later, when I fact-check this with my sister, she informs me that Mom, in fact, does not add cumin to her guac. "I always add it in behind her back," my sister confesses.)

For Jinich, what matters is respecting the ingredients — using them to their best advantage — and respecting the wisdom of those who've come before you, even as you engage in the experimentation necessary to keep cuisines alive.

"I'm very traditional when it comes to technique," Jinich says. "For instance, the enchilada. I will start a revolution if I go to a restaurant and somebody serves me an enchilada with a flour tortilla. I will call the chef and ask him what he's thinking. It's like a disgrace! It loses all its dignity!"

As Jinich enthusiastically explains, there's good reason why enchiladas traditionally call for corn tortillas. Heated in a comal or in hot oil so that they're slightly toasted, corn tortillas become resistant to cracking when adorned with sauce.

"Who knows? Maybe someday someone will come and give me a plate of enchiladas with flour tortillas and I will have to eat my words. I doubt it! But you never know."

The use of crepes in Mexican cooking is one of the remnants of the Maximilian Era (1864–1867), when Maximilian I and Carlota were sent by Napoleon III to establish a French monarchy in Mexico. The ruling class became obsessed with anything French, an obsession that continued through the dictatorship of Porfirio Díaz (1876–1911; Díaz dressed like a Frenchman, mustache and all) and right up to the Mexican Revolution. French-style food made with Mexican ingredients was considered civilized and elegant, the fare of fancy restaurants and state dinners. After the revolution, crepes and French bread (baguettes and the rolls called teleras and bolillos in Mexico) became popular foods that were no longer limited to the upper classes.

Crepas come in many forms, from savory to sweet (the most famous sweet ones being crepas con cajeta). When they are wrapped around a savory filling and generously sauced (as they always are), they resemble enchiladas, with the crepes standing in for the tortillas.

Crepes are very easy to make, though I've found that many people find the idea daunting. But any fears you may have will fall by the wayside if you follow these detailed directions. They come from my sister Alisa, a fabulous pastry chef who always shares her best culinary tricks with me. Alisa made sure I understood how important it is to allow the batter to rest, crucial for soft, fluffy crepes.

Note: This recipe is for savory crepes, but it will also work for sweet ones. Just add 1 extra tablespoon sugar to the batter.

1. Place the flour, eggs, egg yolk, milk, sugar, salt, and melted butter in a blender or food processor and blend until completely smooth. With the machine running, add the water and blend again until smooth. (Alternatively, you can mix the ingredients by hand.) Pour the batter into a container, cover, and refrigerate for at least 30 minutes. When ready to make the crepes, whisk the batter until smooth.

2. Heat an 8-inch crepe pan or a 10-inch nonstick skillet over medium heat. Once it is hot, add a very thin slice of butter and tilt or brush the pan to coat the surface. The butter should quickly bubble and sizzle; if it does not, let the pan heat for a little longer. Tilt the pan, ladle a scant ¼ cup batter onto the lower side, and very quickly tilt and turn the pan to spread the batter over the entire surface. Cook until the edges of the crepe are beginning to dry and brown and the bottom is lightly browned, 30 to 40 seconds. With a spatula or your fingers, swiftly lift up one edge of the crepe and quickly turn it over. Cook the second side until lightly browned, which should take only 20 to 30 seconds. Remove the crepe from the pan and place on a plate. Repeat with the rest of the batter, stacking the crepes one on top of another. After making 2 or 3 crepes, you may need to butter the pan again.