Accessibility links
Bourbon To Bubbly: Shake Up Your Derby Mint Julep : The Salt On Derby Day, the mint-infused cocktail reigns supreme. The mint is a must, but these days, everything from brandy to gin and champagne can sub in for the whiskey. 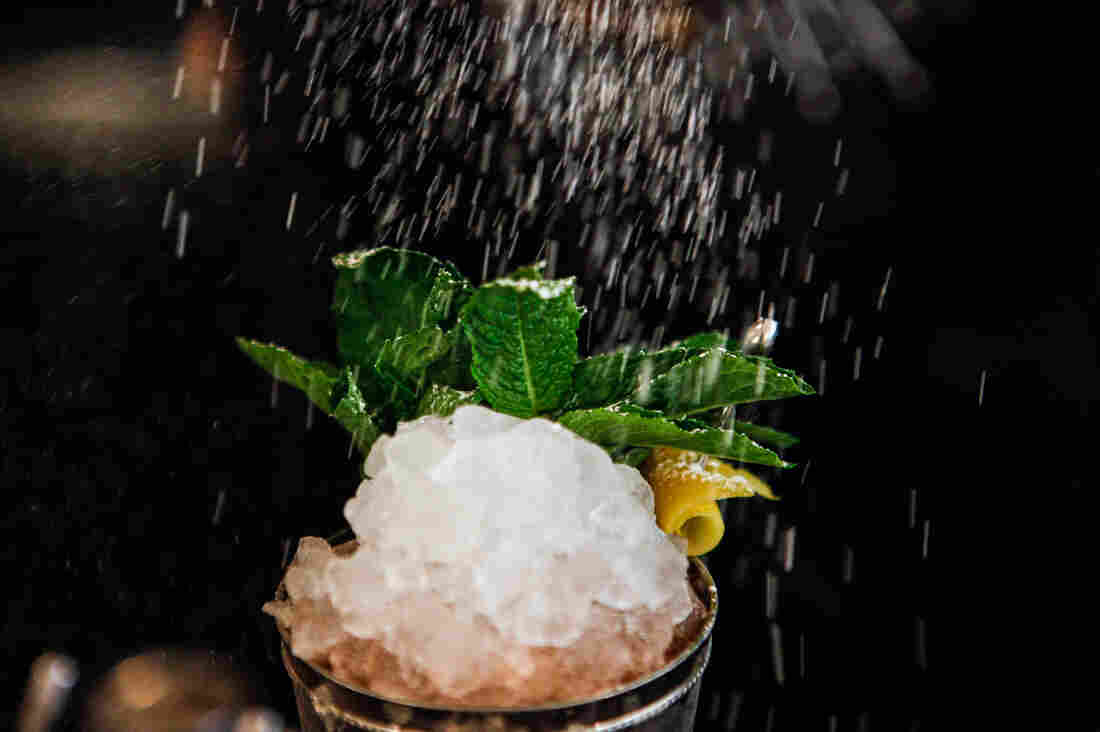 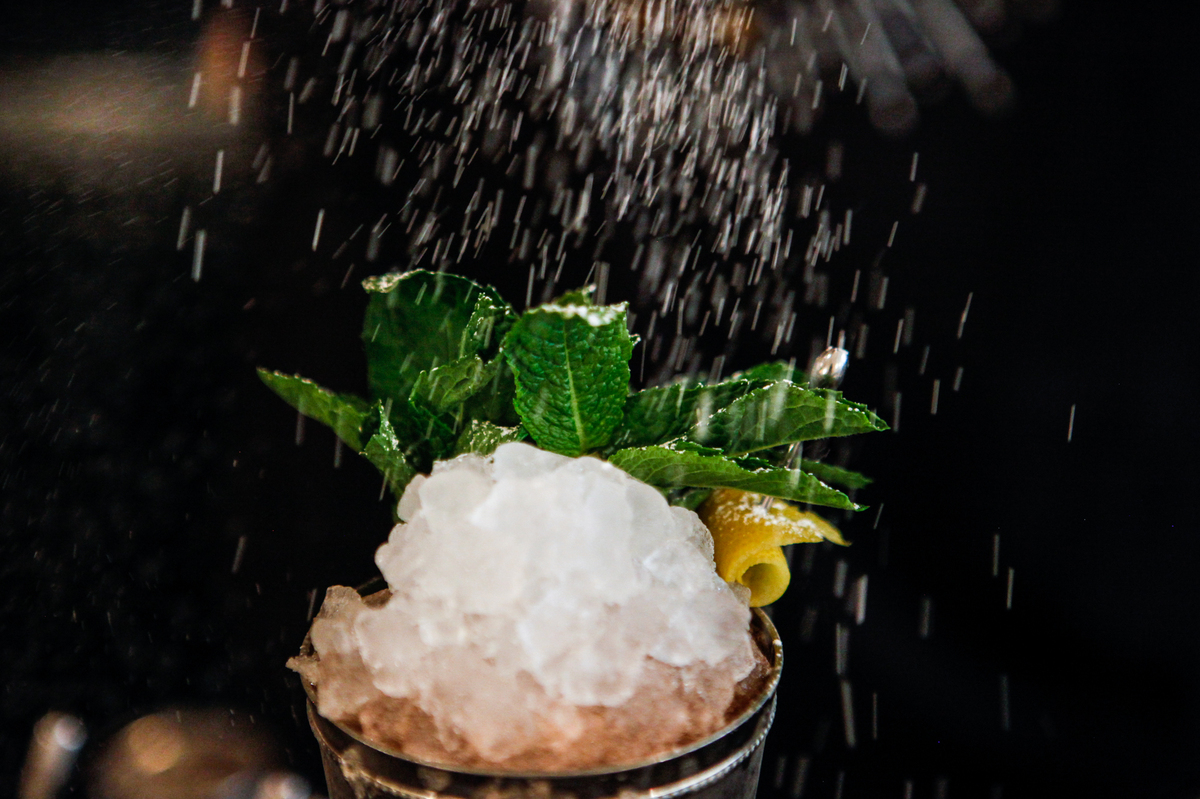 This drink is a twist on the traditional mint julep. Think bubbly champagne in lieu of whiskey. Recipes below.

If I say Kentucky Derby, you say ... mint julep?

Well, if you're a Kentucky dame like me you do. As my fellow Louisville native Jesse Baker once pointed out: "It ain't Derby without a mint julep."

Race fans have been drinking mint juleps at Churchill Downs in Louisville since the racetrack's inception in 1875, according to bourbon historian Fred Minnick.

Last year the crowd sipped 127,341 juleps on Derby Day. And according to Churchill Down's Derby site, this feat requires thousands of bottles of Old Forester Kentucky Bourbon and 60,000 pounds of ice.

My hometown heart swoons for a julep made just the way they serve them up at Churchill Downs. The taste is very minty. A handful of fresh sprigs are heaped into the glass.

You can smell the mint in the stands. Roving vendors who carry trays of juleps move through the boxes and stands hollering out: Mint julep! Get your ice-cold mint julep! "It's like a Cracker Jack salesman at a baseball game," says Minnick.

The shaved ice assures the drink is wicked cold when it's handed to you.

What's Inside A 'Derby Pie'? Maybe A Lawsuit Waiting To Happen

From experience, I'd says it's best to sip — savoring slowly, that is — especially under the May sun. Otherwise you may doze off in the bluegrass before the horses even leave the paddock!

So, if you want to whip up a little Derby spirit at home, how do you make a julep?

Early recipes keep it simple. "Take a silver cup. ... Fill it with ice pulverized to the fineness of snow. Bruise one tender little leaf of mint and stick it in the ice," reads a 1908 Chicago Tribune article quoting a Kentucky gentleman. "Then dissolve a spoonful of sugar" in some good whiskey. (You can also listen to Carl Kassel read a 1937 recipe.)

The traditional julep is always on offer in the bluegrass state, but today bartenders are mixing it up.

"It's not uncommon for Kentucky bartenders to have mint simple syrups or infusions, and you'll see many takes on mint juleps around town," says Minnick. 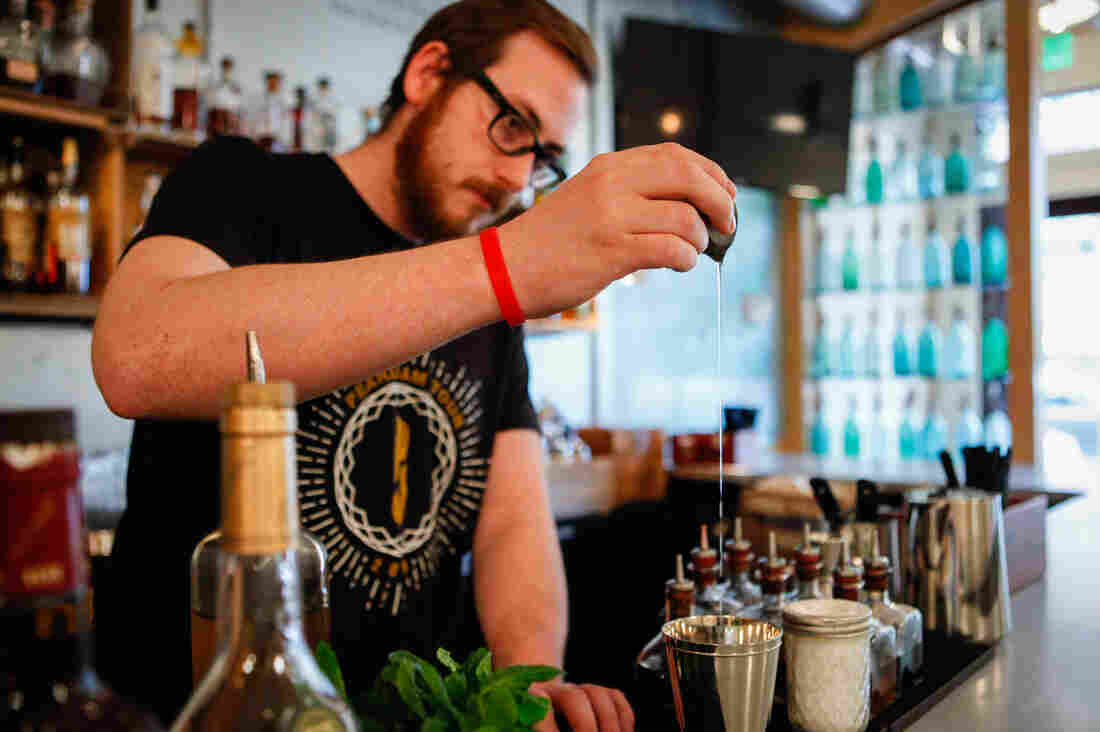 What gives the drink its signature is the aromatics of the mint. "The aroma that comes out is beautiful," says mixologist extraordinaire Derek Brown, who owns several bars in Washington, D.C., and is a big julep fan.

But here's the thing: A julep doesn't necessarily need to be made with bourbon or whiskey.

"You can change the spirit around," says Brown. "That's the fun part of it."

Brown points to the Georgia Peach julep, made with peach brandy. "That's awesome," he says.

I like the idea of the mash-up. But for the first Saturday of May, Derby Day, I'm sticking with the old-fashioned, Churchill Downs-inspired whiskey mint julep.

I'll definitely have one in my hand as the race begins.