Accessibility links
Care Packages: How The U.S. Won Hearts Through Stomachs After WWII : The Salt Before they were boxes of comforting essentials sent to college students, soldiers and others far from home, care packages were a vital lifeline for thousands of displaced families in postwar Europe.

Care Packages: How The U.S. Won Hearts Through Stomachs After WWII

Care Packages: How The U.S. Won Hearts Through Stomachs After WWII 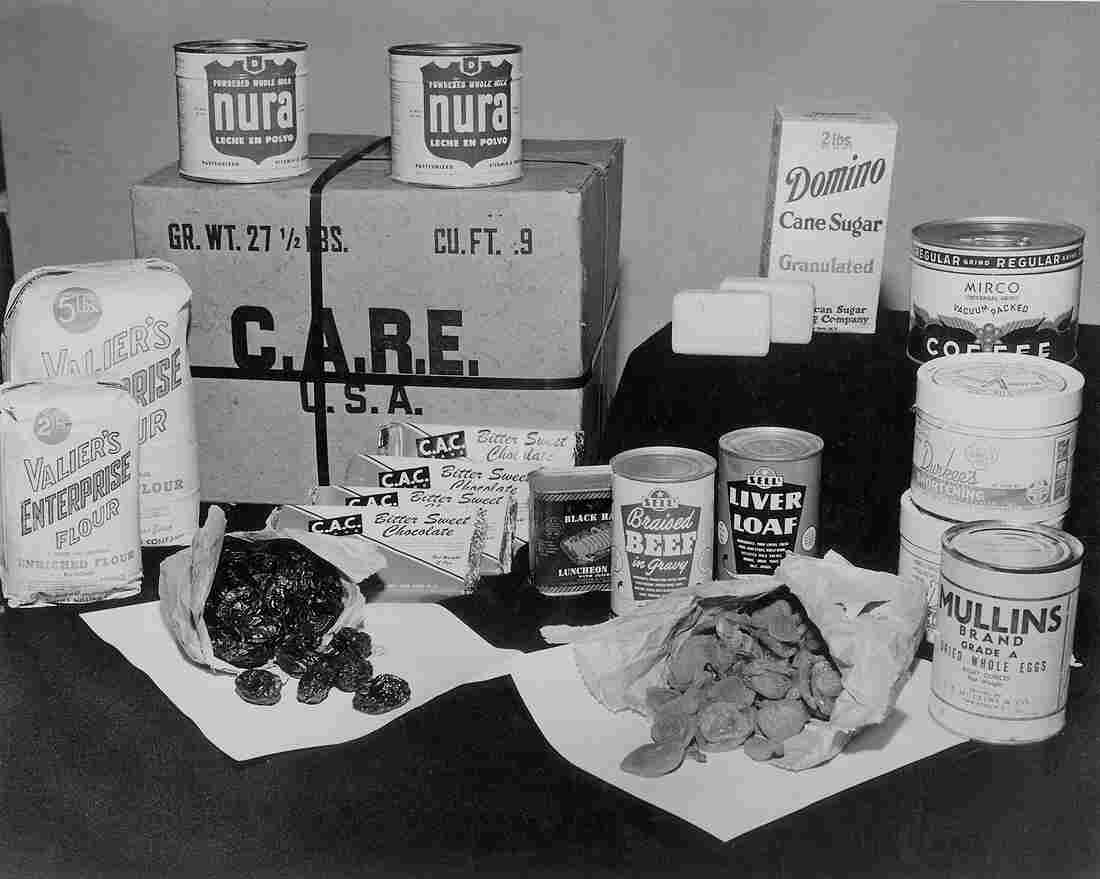 A typical CARE package. "My mother, I am so thankful, had a fantastic imagination for how to make things with limited ingredients," recalls Renate Senter, 77. Her family first received one of the parcels in 1946 while living in West Germany, after fleeing Poland. Courtesy of CARE hide caption 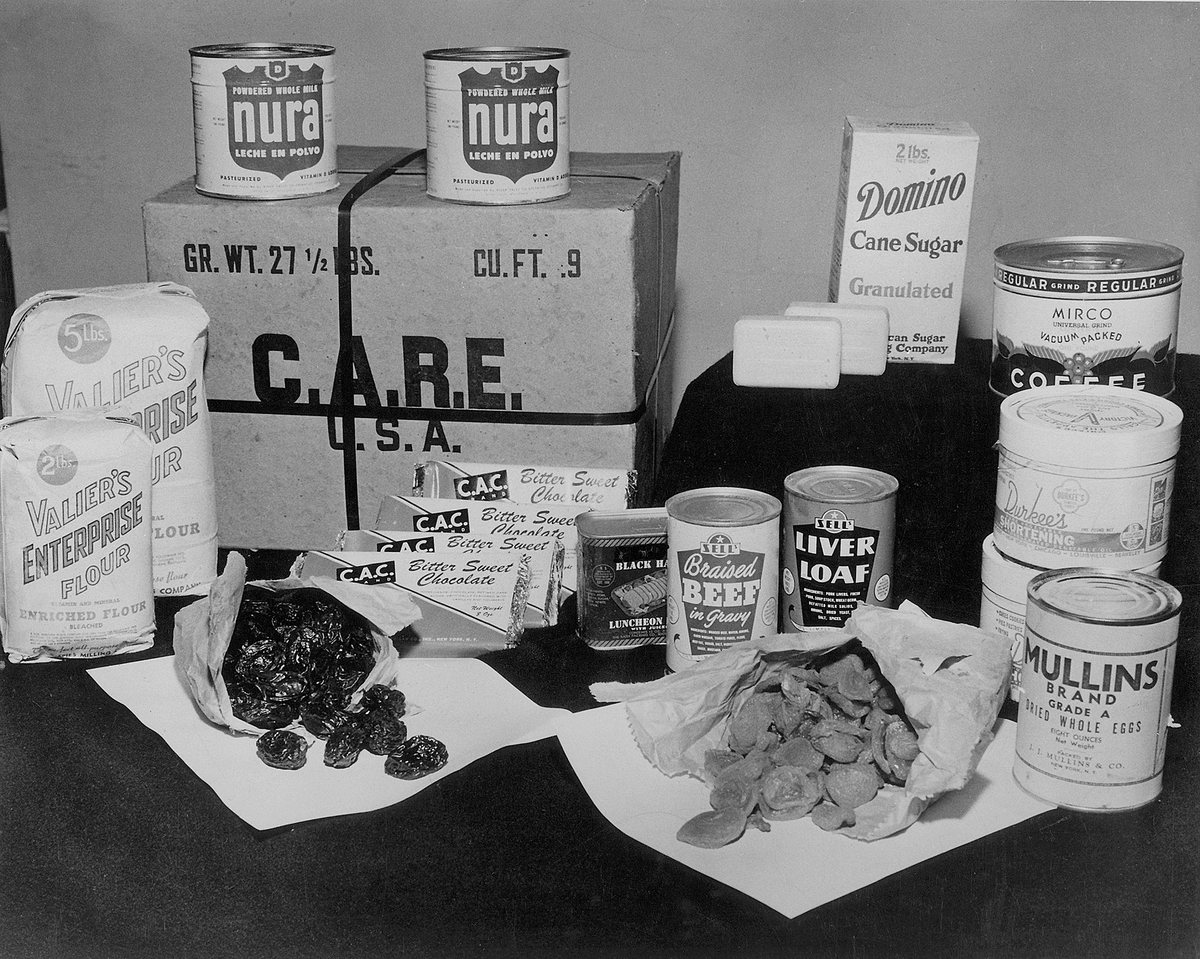 A typical CARE package. "My mother, I am so thankful, had a fantastic imagination for how to make things with limited ingredients," recalls Renate Senter, 77. Her family first received one of the parcels in 1946 while living in West Germany, after fleeing Poland.

Renate Senter clearly remembers the first care package she received, in 1946. She, her mother and her sister had fled Poland. In the aftermath of World War II, they'd ended up in a small town, in the British-controlled section of West Germany. "It was my first day of school and all the children got one," she says. "And I remember it was a small package — burgundy. And in white letters, it said 'CARE' on it."

Inside, there were a candy bar, a tube of Colgate and a little doll. "But I tell you, the first thing that hit me: Included in this box was a tremendous amount of white — really white — paper," she says. And there were pencils! "I don't even remember the candy bar, I was so excited about the paper. You know, because at that time we didn't have paper for our school assignments," she recalls.

Before "care packages" meant a box of comforting essentials sent to college students, soldiers and others far from home, they were a vital lifeline for thousands of displaced families like Senter's in post-World War II Europe. May 11 marks the 70th anniversary of the first delivery.

The packages were shipped by CARE, a humanitarian group formed by 22 American aid and religious organizations. Back then, "CARE" was an acronym for Cooperative for American Remittances to Europe.

After that first school delivery, subsequent packages were sent directly to Senter's residence — her family had been placed with a German family that had a spare bedroom. "Back then we had nothing to eat — absolutely nothing," Senter says. "Luckily, the British fed us in school. Otherwise we had maybe one loaf of bread to share for a week."

So her family relied on the big packages from CARE — filled with lard, flour, sugar and coffee — that arrived every four months. "My mother, I am so thankful, had a fantastic imagination for how to make things with limited ingredients," Senter says. "I remember she would send me to the railroad tracks to collect coal that had accidentally fallen out. And we would use that to heat the stove." 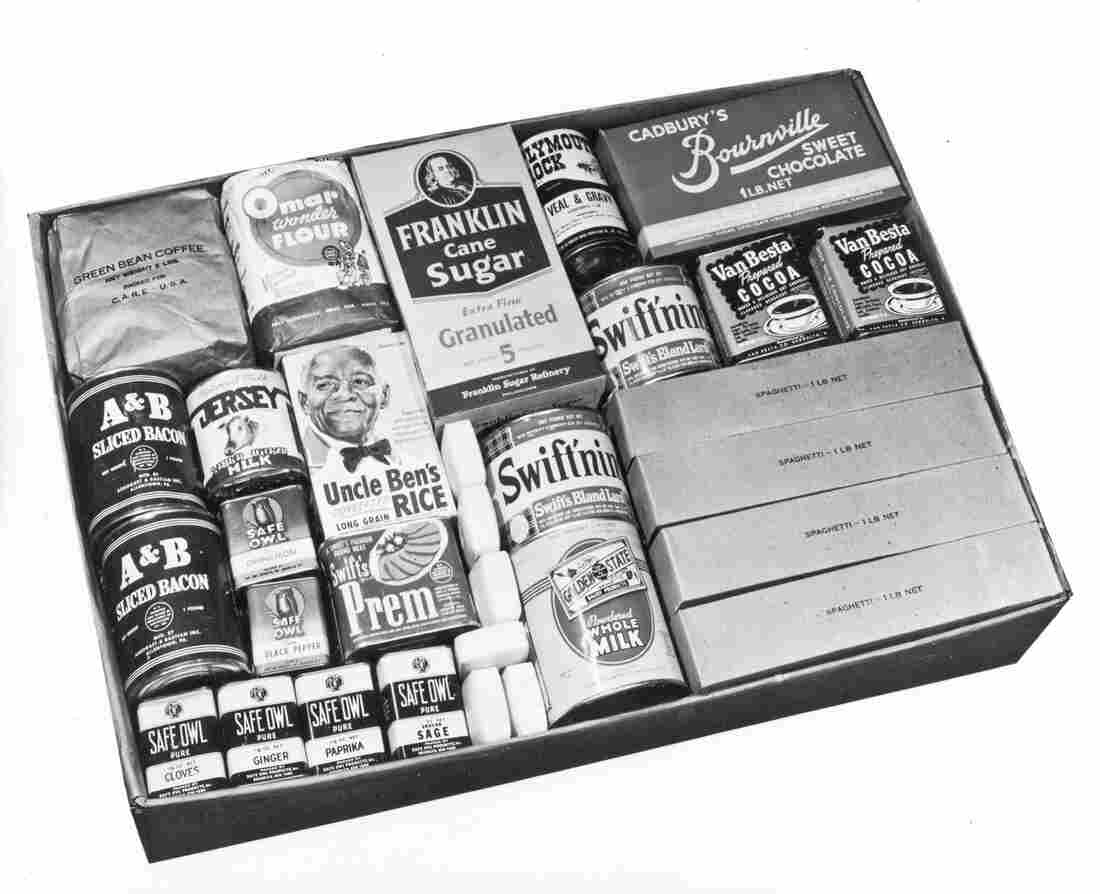 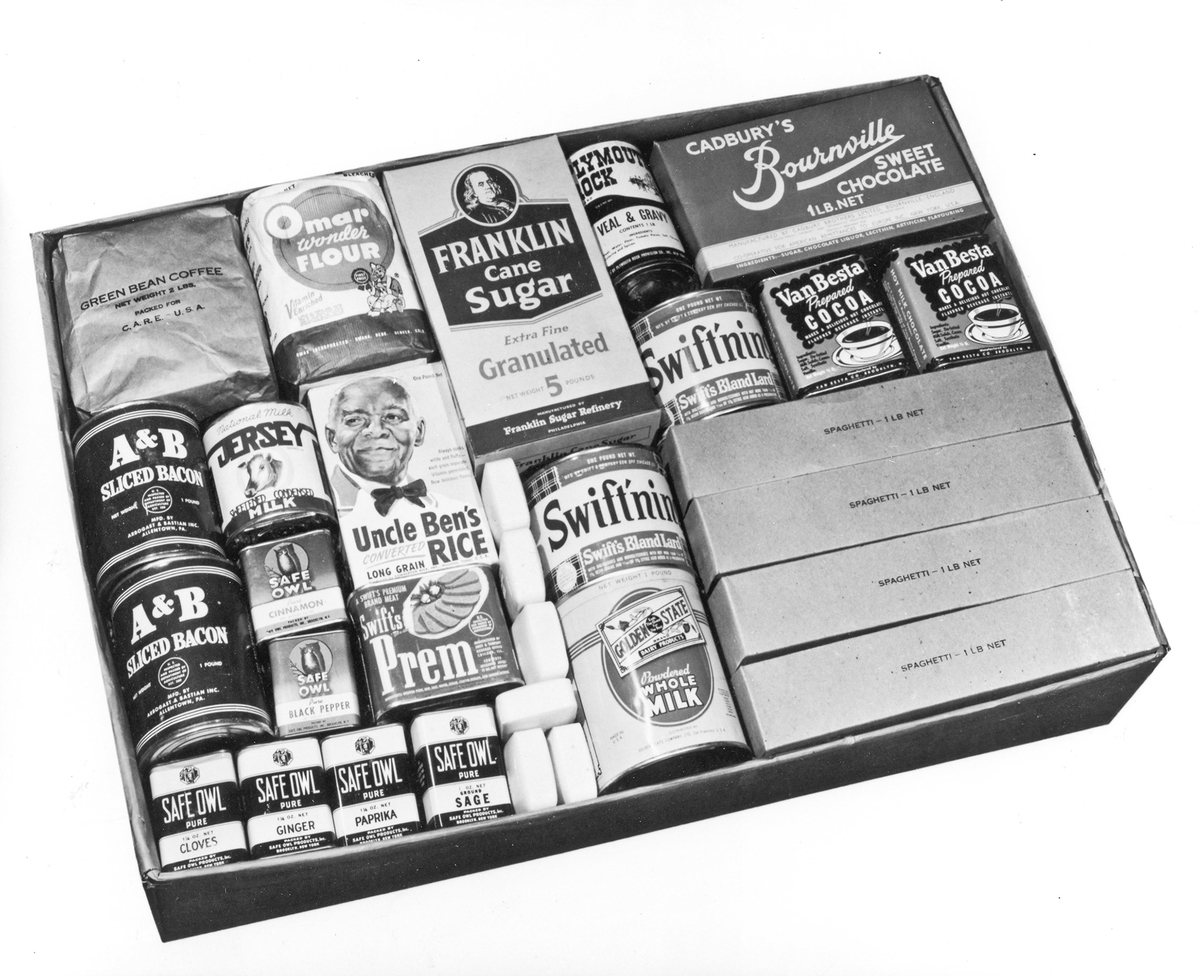 With the flour, sugar and lard, Senter says, "my mother was able to make a cake." It paired well with wild blueberries, which Senter sought out in the nearby woods.

Now Senter is 77 ("though I feel like I'm 30," she insists) and she's a U.S. citizen, married to an American man. CARE packages were what first piqued her curiosity about the States, she says, and eventually inspired her, at age 19, to move to Los Angeles to work as an au pair.

"I remember clearly, showing that first package to my mother I was given at school," she says. "At that point, my mother didn't have very much good to say about the Americans — both her parents had died in the last air raid. But I said to her, 'When I grow up, I want to go to America.' "

When it first launched, the aid scheme became a symbol of American generosity. Aid in general was a big part of U.S. diplomacy postwar, helping to rebuild the relationship with Europe. In an interview with Smithsonian published in 2001, one of those early CARE package recipients, Klaus Pütter, a German POW held in a French hospital, recalled that at first, he was suspicious of American motives behind the package.

Despite his "hunger and desperation," Pütter, a German army chaplain, recalled that he debated for three days before deciding to tuck into the parcel, which contained corned beef, bacon, liver loaf, flour and other much needed comestibles. Eventually, Pütter told Smithsonian, he concluded that "Americans are different. They help people in need, regardless of who and where they are." 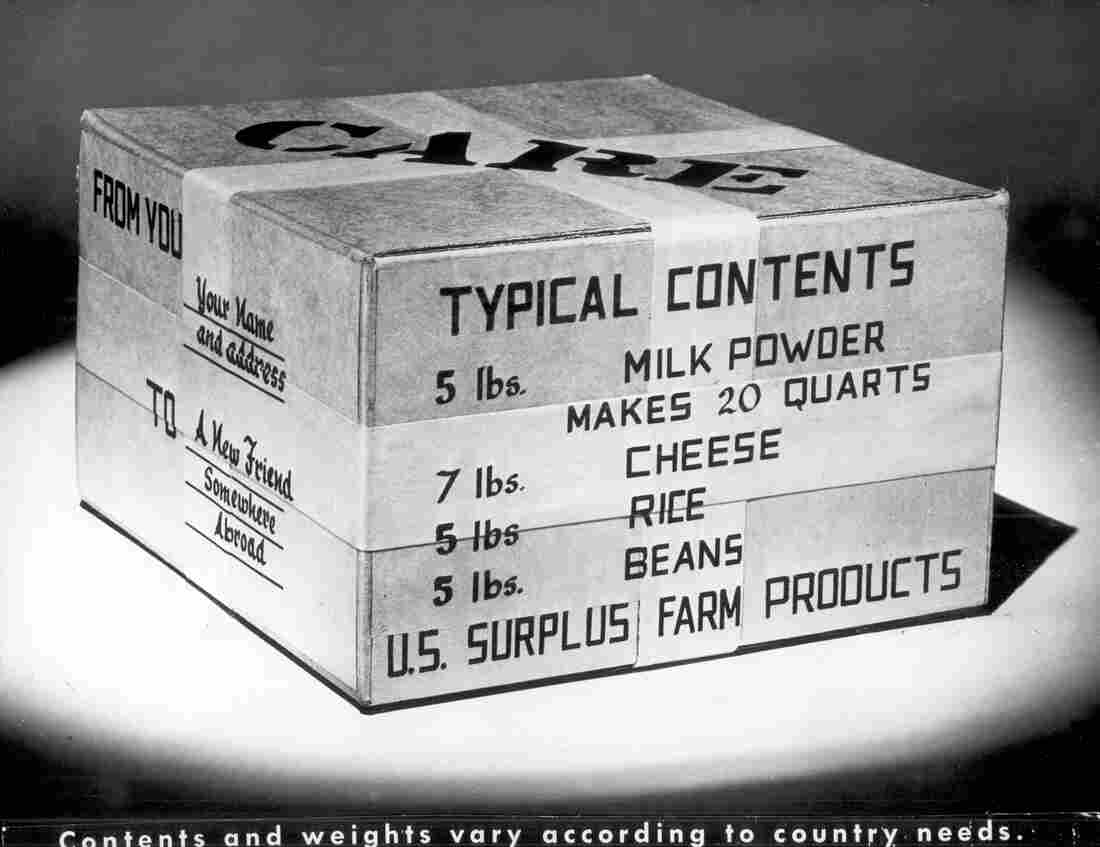 This CARE package included 5 pounds of milk powder, 7 pounds of cheese, 5 pounds of rice and 5 pounds of beans. In 2001, Klaus Pütter, a German POW held in a French hospital, recalled that at first, he was suspicious of American motives behind the package. Eventually, he concluded that "Americans are different. They help people in need, regardless of who and where they are." Courtesy of CARE hide caption

And postwar, for the first time, Americans had the infrastructure and technological capacity to send packages halfway across the world, says CARE's president, Michelle Nunn. "The idea that you could send support to strangers on the other side of the world — that was a novel idea."

Citizens approached the group and had them send CARE packages to friends and family left behind in Europe. "And then we worked with local [European] governments to identify families and people in need," says Nunn.

When the Soviets blockaded Berlin in 1948, the U.S. and U.K. responded with the Berlin Airlift: American and British air force pilots flew in food and fuel. Sixty percent of relief sent to the city came from CARE, according to Nunn. All told, Americans dropped 250,000 packages.

The first packages sent to Europe were surplus military rations left over from the war. When those ran out, CARE started putting together its own packages. At first, the boxes came furnished with just the basics — rice, beans, powdered eggs and milk.

Soon, CARE started customizing packages to suit regional tastes. There were parcels tailored for Asian palates (with beans, miso and soybean oil), a kosher CARE package delivered to Jewish refugees and an Italian package (which came with spaghetti and assorted spices).

A few years later, as CARE began to expand into Northern Europe, Asia and Africa, it also had to adapt its delivery methods for each region. In Sri Lanka, the organization deployed elephants to help with deliveries. "We used camels in Pakistan," Nunn says. "And reindeer in Finland."

The acronym now stands for "Cooperative for Assistance and Relief Everywhere."

There are no more chocolate bars in burgundy boxes these days. CARE delivered its last physical package in 1968. It now uses electronic banking systems to funnel donations to those in need.

"We're providing support and relief for Syrian refugees — most of whom have ended up in neighboring countries like Turkey and Lebanon," Nunn says. "And what we do now is we provide each family with a debit card, which they can use to buy exactly what they need." This new system cuts down transportation costs, and, Nunn adds, is designed to benefit local farmers and businesses.