Accessibility links
Fisheries Scientist Under Fire For Undisclosed Seafood Industry Funding : The Salt Ray Hilborn has a reputation for challenging studies showing declines in fish populations. But Greenpeace says its public records request has revealed a failure to disclose industry funding on papers. 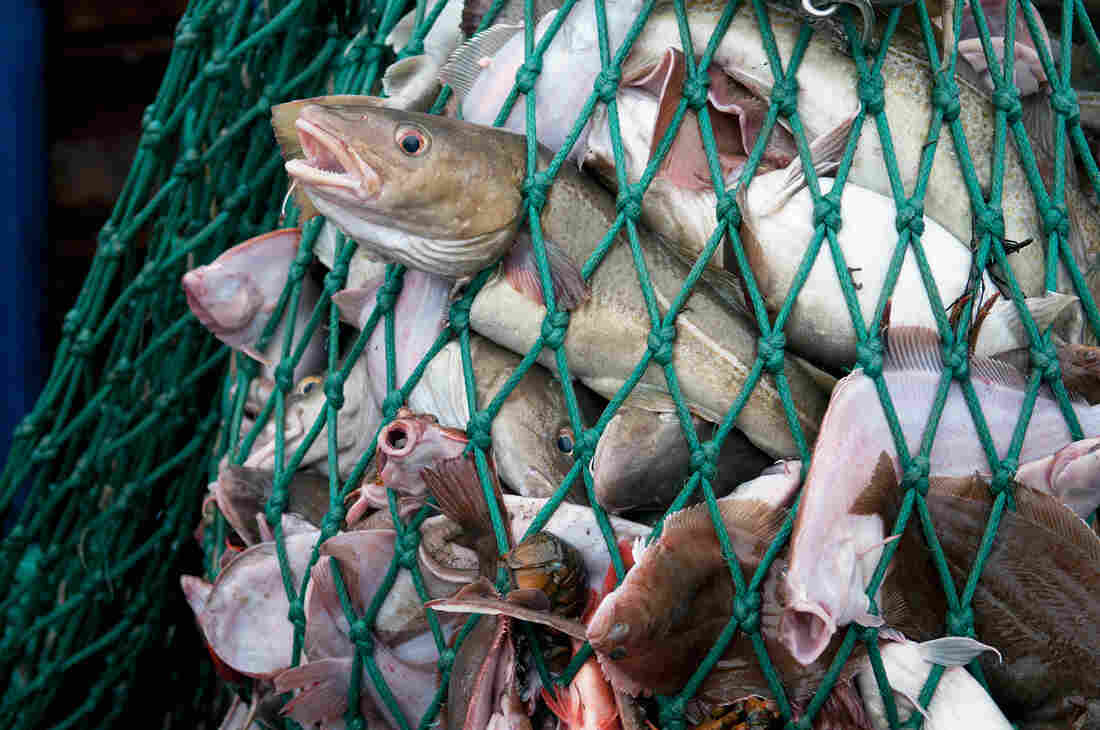 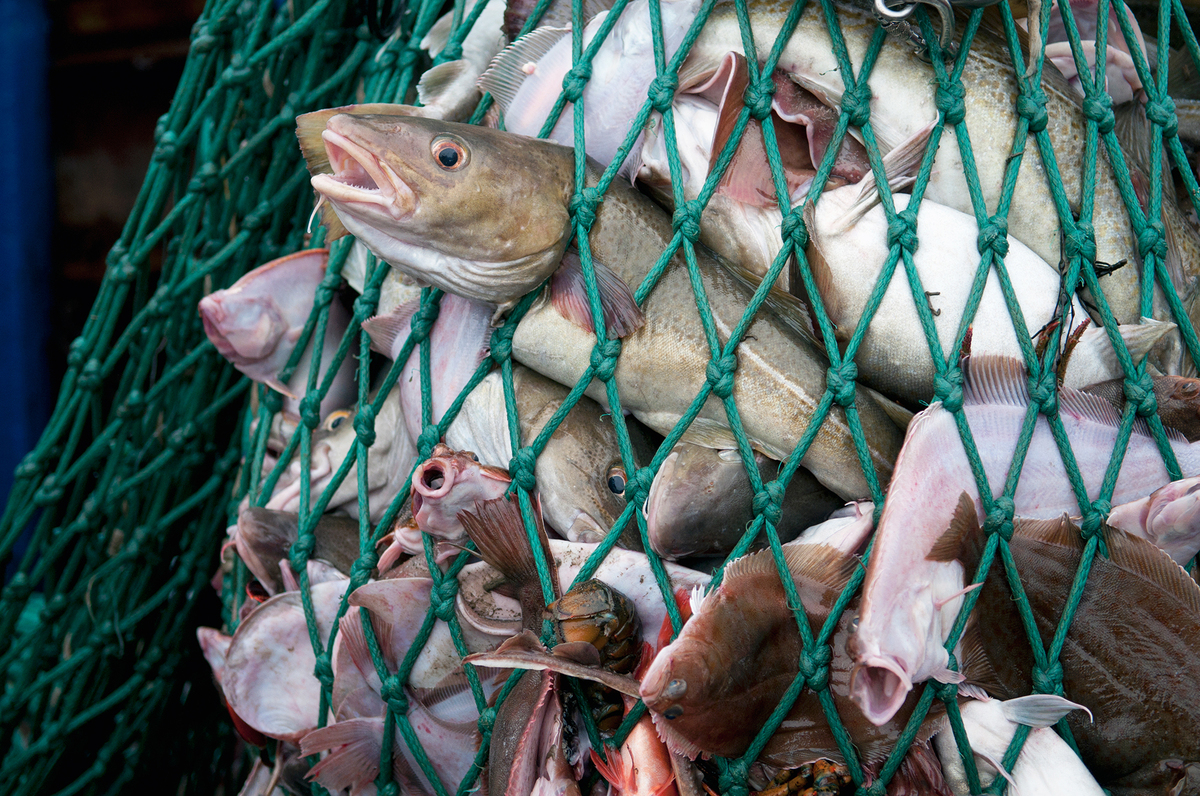 A fishing dragger hauls in a net full of Atlantic cod, yellowtail flounder and American lobster off the coast of New England. Greenpeace says Ray Hilborn, a prominent fisheries scientist known for challenging studies that show declines in fish populations, failed to fully disclose industry funding on some of his scientific papers.

A prominent and outspoken fisheries scientist at the University of Washington is under attack from Greenpeace for not disclosing industry funding in several scientific papers stretching back to 2006.

Greenpeace calls Ray Hilborn, a professor at the School of Aquatic and Fishery Sciences, a "denier of overfishing," and says he has received at least $3.56 million in funding from dozens of fishing and seafood industry groups over a 12-year period. Greenpeace claims that on several occasions, Hilborn failed to disclose those affiliations in published scientific papers.

"This is about a person who is the most vocal critic of marine conservation efforts. And it turns out that he has received millions of dollars from industry and failed to consistently disclose those conflicts of interest appropriately," says John Hocevar, Greenpeace campaign director.

Hilborn defends his work in a response he made public Wednesday night. He says he's been in conversations with officials at the University of Washington, where he works, and has alerted an editor at the Proceedings of the National Academy of Sciences, where he has published several papers, that he is being scrutinized by the environmental group.

Greenpeace obtained information about Hilborn's research-funding sources through a Washington state public records request to the university. It's the latest example of food activists using FOIA and other records requests to obtain information that will embarrass scientists seen as friendly to industry. 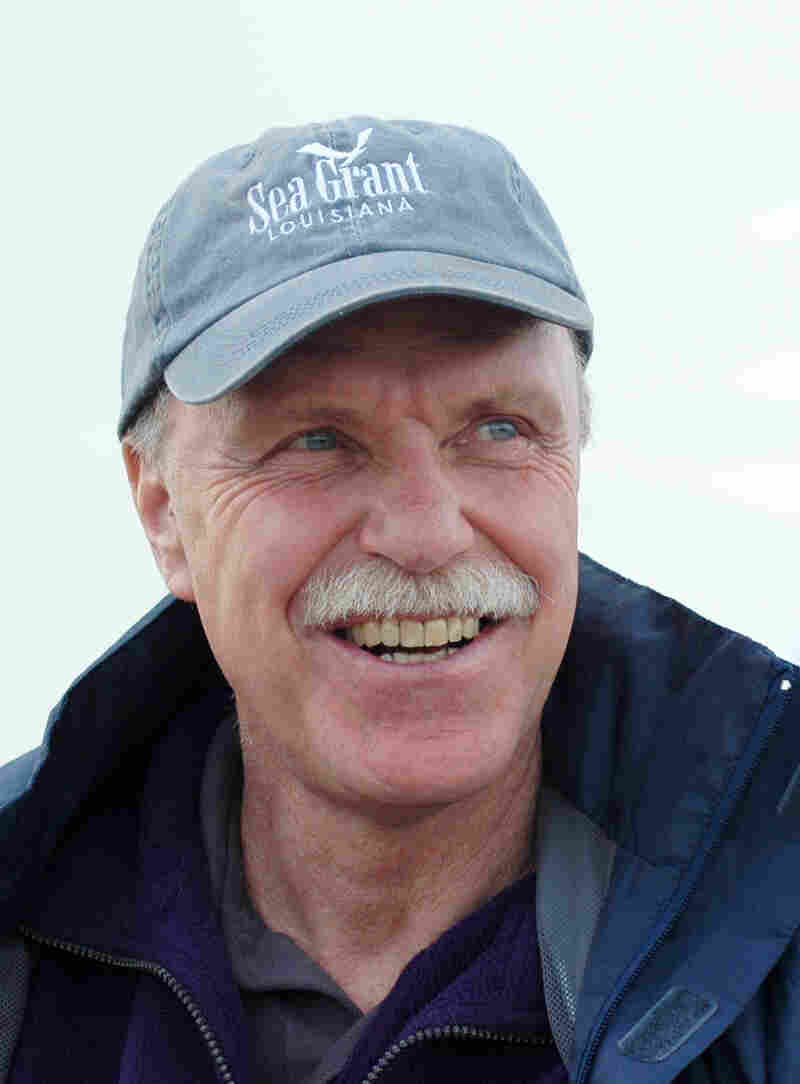 In an eight-page letter sent to UW President Ana Mari Cauce on Wednesday, Greenpeace said that Hilborn's funding and consulting work from industry groups were not properly disclosed. Those industry groups include Bristol Bay Science and Research Institute, Bering Sea Fishermen's Association, Trident Seafoods, Peter Pan Seafoods, the National Fisheries Institute and more. They say Hilborn acknowledges only 21 groups by name in his work, but say he's received funding from a total of 69 different industry groups.

"I don't know where that number comes from," Hilborn tells NPR. "I never had any significant industry funding until I published a paper in 2009 on rebuilding global fisheries, and at that point, I discovered the fishing industry was willing to give me the money to do that work. I've made no secret about it. My website lists major funding sources.

"If you look at whose interest is in rebuilding fisheries, it's not the NGOs, it's the fishing industry. They and the public benefit from successful fishing."

Greenpeace, for example, alleges Hilborn did not disclose $58,000 in funding from the New Zealand Seafood Industry Council in a 2006 paper for the Canadian Journal of Fisheries and Aquatic Sciences on orange roughy. They also say he neglected to mention employment from the California Fisheries Coalition, which includes 27 recreational and commercial fishing associations, while questioning the environmental benefit of establishing marine protected areas off the coast of California.

Hilborn is not one to shy away from controversy. He has a reputation for challenging studies that show declines in fish populations. He's been embroiled in public disagreements with other prominent fisheries scientists, and is the lead voice behind the CFOOD project, which harshly calls out reporters (including this one) on coverage they deem erroneous, and openly critiques emerging fishery science studies, sometimes frustrating fellow researchers. Renowned ocean scientist Sylvia Earle is frequently a favorite target of the group's blog and Twitter account.

Greenpeace says the CFOOD project, which was launched last year, has received $30,000 from Arctic Storm (a fish processing company); $30,000 from Glacier Fish Co.; $10,000 from the International Coalition for Fisheries Association; and $210,000 from the seafood industry group, the National Fisheries Institute (NFI). As of publication time, no funding sources were disclosed on the CFOOD site — though a tweet Thursday afternoon said they are trying to update this "asap."

Hilborn says CFOOD is an umbrella term for a broader project.

"The website is a trivial part of that. There are three students working part-time to run it. They're all paid from the industry donation account," he says. "The 'C' is for collaborative. We're developing a network of people around the world knowledgeable in sustainable fishing."

Gavin Gibbons, a spokesperson for NFI, says the group is pleased to have sponsored some of Hilborn's work, adding: "We do not encourage [our] members to rebut sound science. That said, correcting the record on misreporting on fisheries science could be a full-time job."

The money Greenpeace has called into question is only a small portion of the $16.1 million in research funding Hilborn has brought in since 2003. And industry groups are not the only ones interested in collaborating with him. Funding has also come from foundations, environmental and government groups, including the Gordon and Betty Moore Foundation ($6.6 million); the National Science Foundation ($1.9 million); the David and Lucile Packard Foundation ($307,500); NOAA ($582,000) and more.

And Hilborn has plenty of defenders among his fellow scientists. Douglas Rader, chief oceans scientist with the nonprofit Environmental Defense Fund, calls Hilborn an "accomplished, world-renowned scientist who has made important contributions to the field of fisheries science and conservation."

"While we cannot speak to Dr. Hilborn's individual compliance with disclosure requirements across all of his publications, his partnerships with industry have always been well-known," Rader writes in an email.

Hocevar acknowledges that Greenpeace is borrowing a page from the playbook of non-GMO activists. Over the past year, opponents of genetically modified foods have used freedom of information requests to target researchers at public universities, including Bruce Chassy, a professor at the University of Illinois, and Kevin Folta, a food and agriculture science professor at the University of Florida. In both cases, the emails revealed previously undisclosed ties to the biotech industry. In this case, however, Greenpeace did not seek access to Hilborn's emails, only funding disclosures.

And they're not done. On Friday, Greenpeace submitted a records request for Trevor Branch, a colleague of Hilborn and a professor at UW's School of Aquatic and Fishery Sciences. The request seeks funding documents stretching back to 1987. "I was 12 [years old] at the time," says Branch. "I don't have any money from the fishing industry, so I'm not worried about their request. It's a fishing expedition looking for anything they can find to discredit you."

Branch says acknowledging funders is a standard part of science disclosures, but he says there's a limit to how long scientists need to disclose the information. He says the tactic used by Greenpeace will make researchers more wary of the funding they accept in the future.

"Ray [Hilborn] has received funding from 50-100 sources. If he had to list all of them every time, it would be longer than the paper. That's not what we do in science. There are no papers that require a list of funding from every source you've ever gotten money from," Branch says.

Hilborn has a simpler explanation for being in the line of fire. "Greenpeace can't attack the science because they don't do science. Instead they attack the messenger."

UPDATE 6/16/2016: Since our story ran, the University of Washington, The Proceedings of the National Academy of Sciences, and Science magazine have reviewed the charges Greenpeace made against Ray Hilborn for non-disclosure of funding sources and found he was not in violation of university or journal procedures. Additionally, the CFOOD website has since been updated to disclose funding sources to readers.