Accessibility links
An All-Volunteer Squad Of Farmers Is Turning Florida Lawns Into Food : The Salt Perfectly manicured lawns are a bit of an obsession in Florida. But one Florida man is working on a project that's turning his neighbors' lawns into working farms. 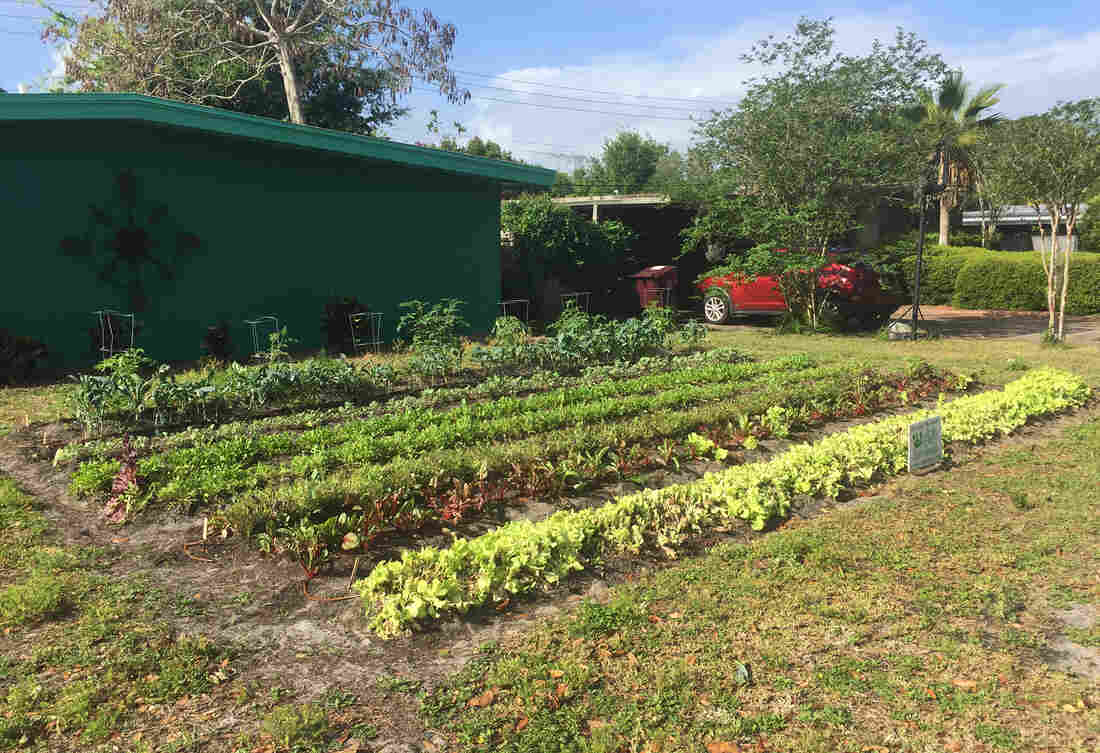 Rows of greens grow on the front yard of Gary Henderson's house. He's one of a handful of homeowners in Orlando, Fla., who've given up their lawn to Fleet Farming. Once "you realize that you can eat your lawn, I think it makes a whole lot of sense," Henderson says. Catherine Welch/WMFE hide caption 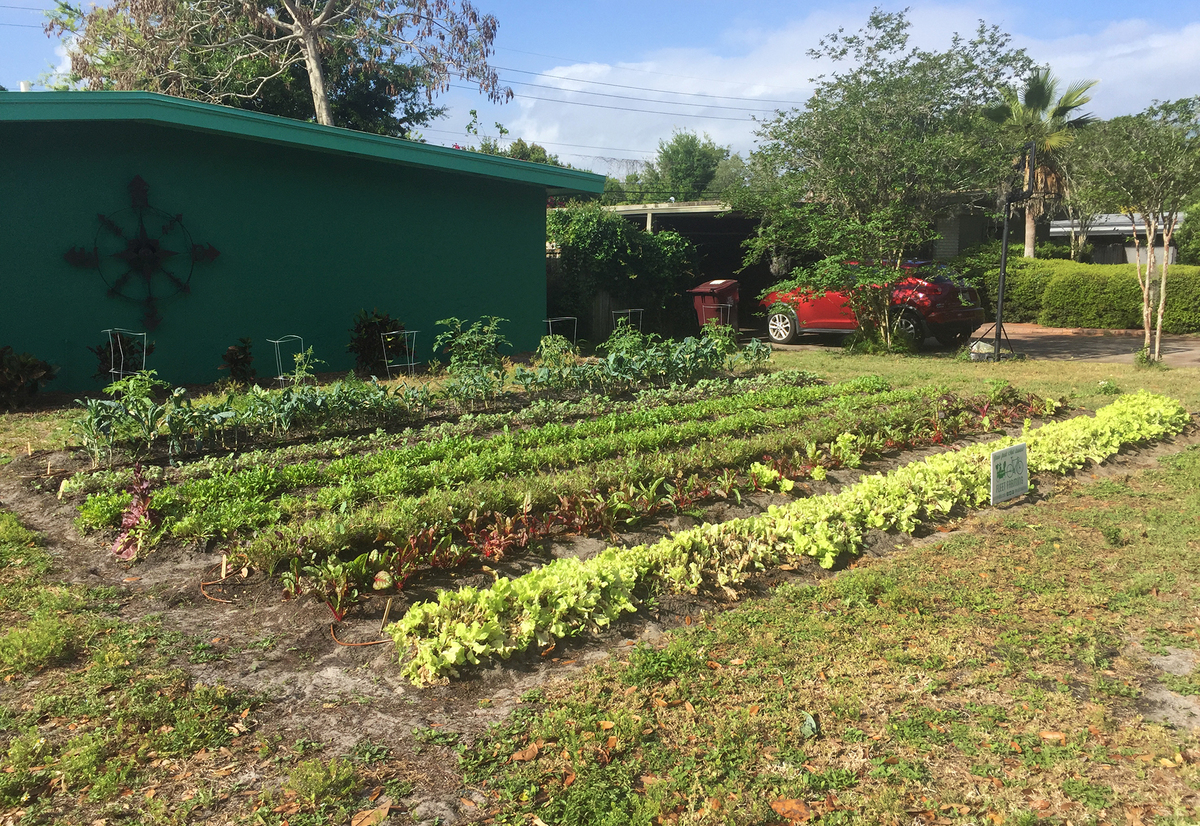 Rows of greens grow on the front yard of Gary Henderson's house. He's one of a handful of homeowners in Orlando, Fla., who've given up their lawn to Fleet Farming. Once "you realize that you can eat your lawn, I think it makes a whole lot of sense," Henderson says.

In Florida, homeowners have a propensity for landscaping. They take great pride in the green carpet of grass in front of their homes. But one Florida man is working on a project that's turning his neighbors' lawns into working farms.

Chris Castro has an obsession — turning the perfectly manicured lawns in his Orlando neighborhood into mini-farms.

"The amount of interest in Orlando is incredibly surprising," Castro says.

Surprising because he's asking Floridians to hand over a good chunk of their precious yards to volunteers who plant gardens full of produce. His program is called Fleet Farming, and it's starting off small, with 10 of these yard farms. Most of them sit smack in the middle of the front yard.

Lawns are a thing here. Urban farms? Not so much. But so far, no neighbors have complained. 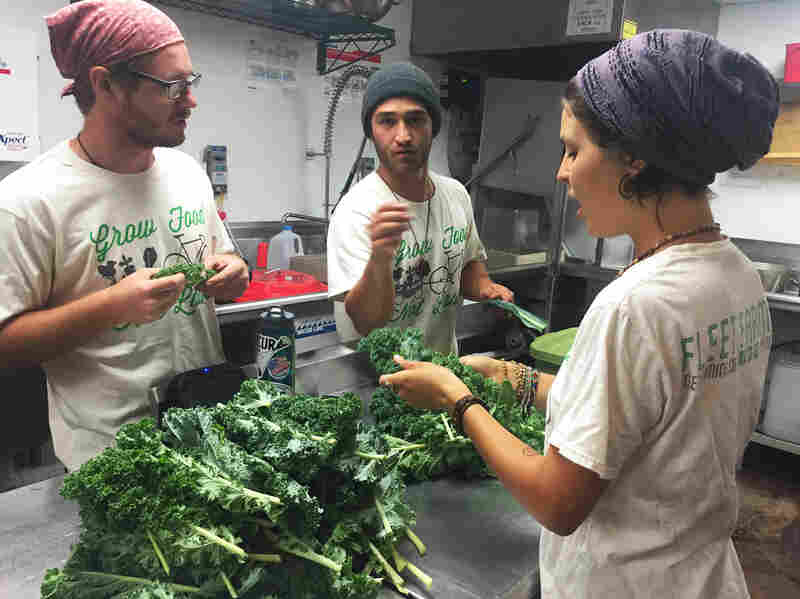 Castro squeezes this project around his day job: He works on sustainability in the mayor's office. Castro's parents are palm tree farmers in south Florida, and he has a degree in environmental science — a background that's a perfect combination of his day job and side project. Thanks to his work in City Hall, he knows Orlando allows residents to farm on up to 60 percent of their yard.

Castro makes sure every garden is meticulously maintained — including homeowner Gary Henderson's.

"I just think that the whole idea of lawns, especially in a place like Florida, is absurd," says Henderson, standing amid rows of tomatoes, sweet lettuce, carrots and arugula growing smack in the middle of his front yard. Henderson donated the use of his yard about a year ago, after noticing other Fleet Farming gardens on his block.

"If you look across the street there, there's a garden," Henderson says as we stand outside in his yard. "That's my partner's daughter's house. I looked the other way, and there's one at the church, and [I] said, this might be something good to get involved with."

All of Fleet Farming's volunteers only ride bikes, going from garden to garden to harvest the produce. They were just at Henderson's garden.

"The Fleet people came in a swarm of bicycles," Castro says. "There were probably 15 people here, and they harvested lettuce and kale and arugula and, gosh, not even sure what else they had, Swiss chard."

Because the program is bike-powered, Castro keeps the yard gardens within a mile of the local farmers market, where Fleet Farming sells most of the produce. 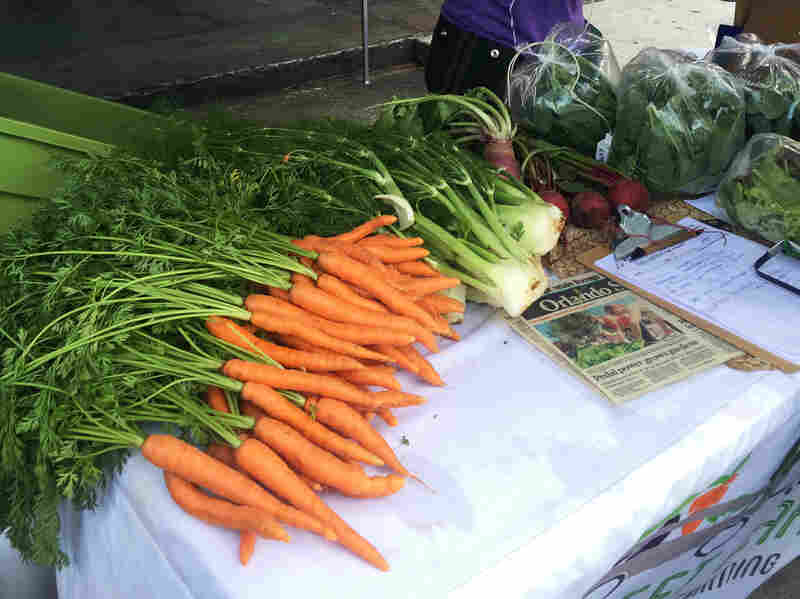 When I visit the farmers market, Michele Bimbier is working the booth at the market, selling produce she and a few volunteers picked and washed just that morning. Lisa Delmonte saw Bimbier riding her bike to the market, and stopped by for some veggies. She's a fan for two reasons — the produce is local, and she says it tastes better than produce that's bumped around in the back of a delivery truck.

Along with sales at the farmers market, Castro sells kits to start Fleet Farming in other communities. There's a Fleet Farming program in Oakland, Calif., selling produce to local restaurants.

Among Fleet Farming's fans is Curtis Stone, a Canadian author and farmer who tours the U.S. spreading the gospel of urban farming. (He's got a farm in his yard.) He says Fleet Farming's patchwork of donated yards delivers more than local access to fresh produce.

"Land is often out of reach for many young people who want to get into agriculture," Stone says. "But if you eliminate that idea altogether, there really isn't a barrier to entry."

As he looks out over the rows of veggies growing in his front yard, homeowner Gary Henderson offers this advice to anyone thinking about replacing their lawn with a garden.

"You know, I would say give it a try," Henderson says. "And once you get to the point where you realize that you can eat your lawn, I think it makes a whole lot of sense."

And so do 300 other residents of central Florida. That's how many people are on Fleet Farming's waiting list, ready to eat their lawns instead of having to mow them.