Accessibility links
Urban Foraging: Pascal Baudar Unearths The Wildcrafted Flavors Of LA : The Salt For Pascal Baudar, LA is a treasure trove of edible plants and insects that he uses in unusual culinary creations. He helps some of the city's top chefs put wild foods on menus and has a new cookbook. 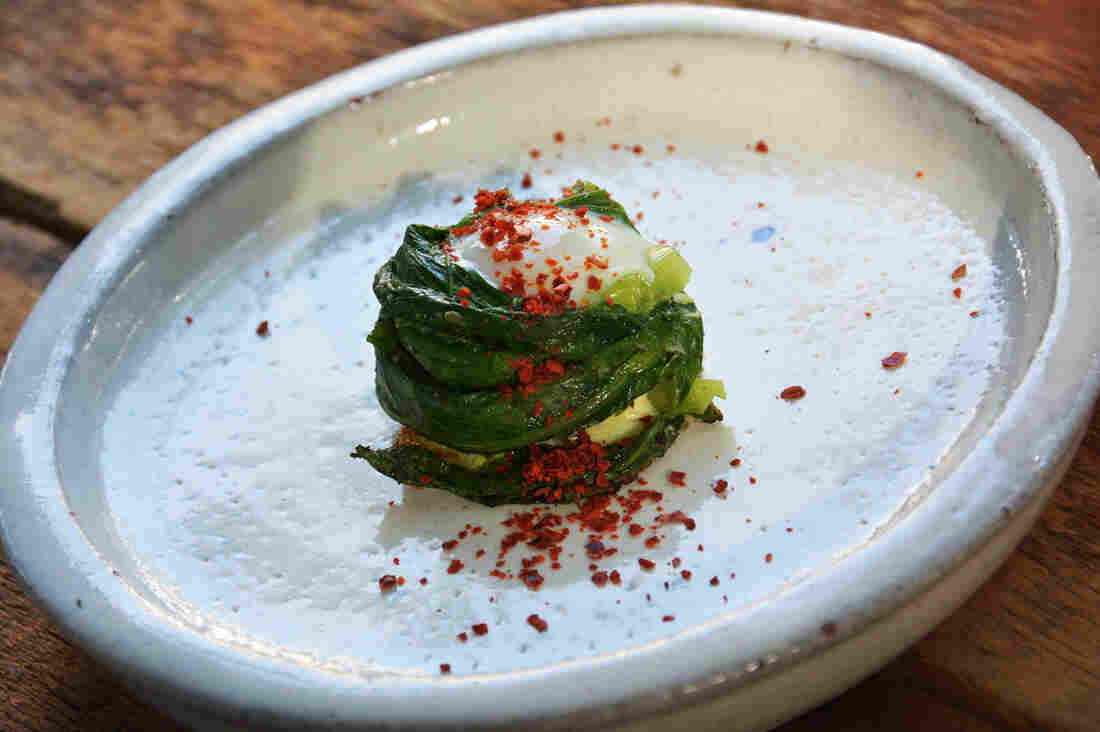 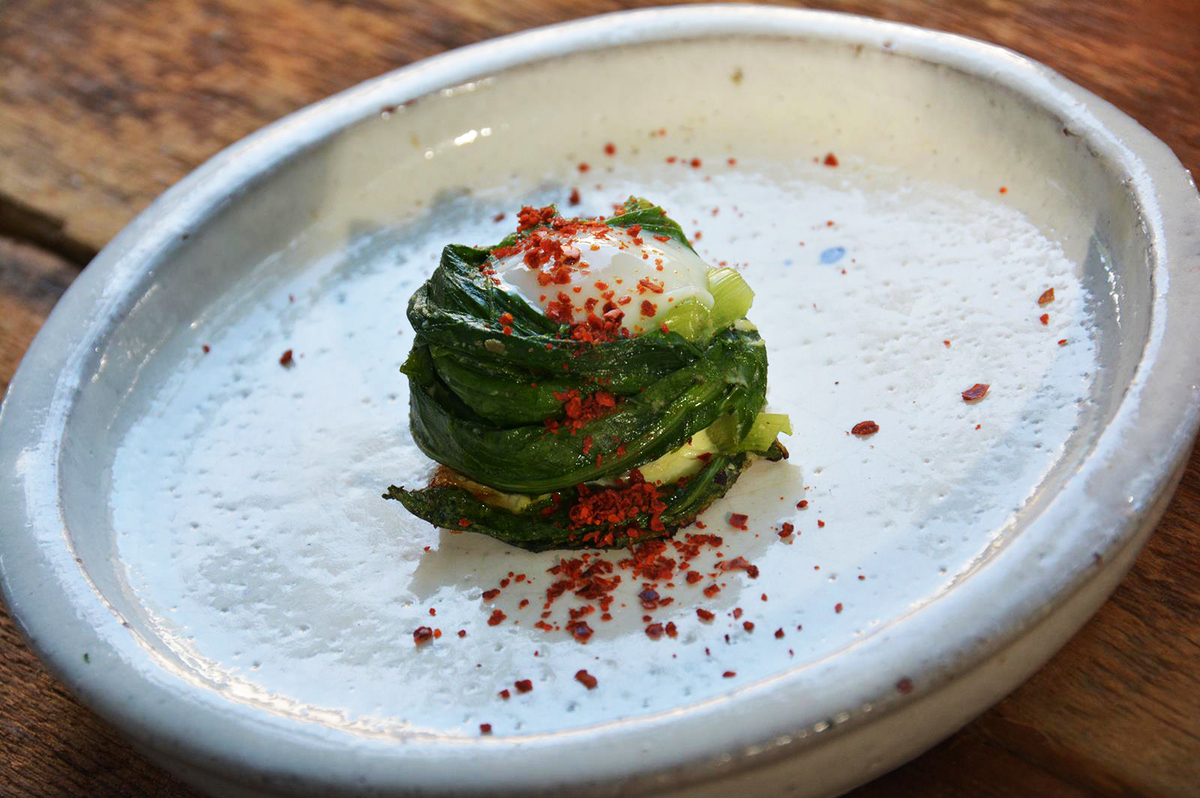 Quail in dandelion's nest — one of Pascal Baudar's wild-crafted culinary creations. "So many wild plants, so little time," says Baudar. He leads foraging expeditions in the forests of Los Angeles and works with chefs to create meals based on wild foods.

Known for freeways more than forests, Los Angeles isn't the first place one thinks of when it comes to foraging for food in the wilderness. But for Pascal Baudar, the city is a treasure trove of hundreds of varieties of wild plants and insects that he uses in unusual culinary creations.

Thirty years ago, Baudar moved to Los Angeles from a small town in Belgium where, as a child, he spent much of his time in the forest. "You pick up plants, you munch on [them], walnuts, hazelnuts. ... And sometimes you ask the old people ...'Can I eat that? What can you do with it?' So you learn," he says.

These days, he's passing on that knowledge to the public. Baudar holds classes every weekend that usually end with a tasting of his wild-sourced cuisine.

A couple of months ago, I joined a group of about 20 students who followed Baudar on a foraging expedition in a pocket of private land in the Angeles National Forest.

Hunting and gathering for your supper is an age-old idea, of course. But the rise of restaurants like the world-acclaimed Noma, in Copenhagen — renowned for its menu scavenged from the Nordic Coast — has made foraging fashionable in haute cuisine.

Baudar has been working with Michelin-starred restaurants in the Los Angeles area, like Niki Nakayama's n/naka. While many foragers provide wild foods to restaurants, Baudar also contributes his culinary expertise on the wild plants he forages. 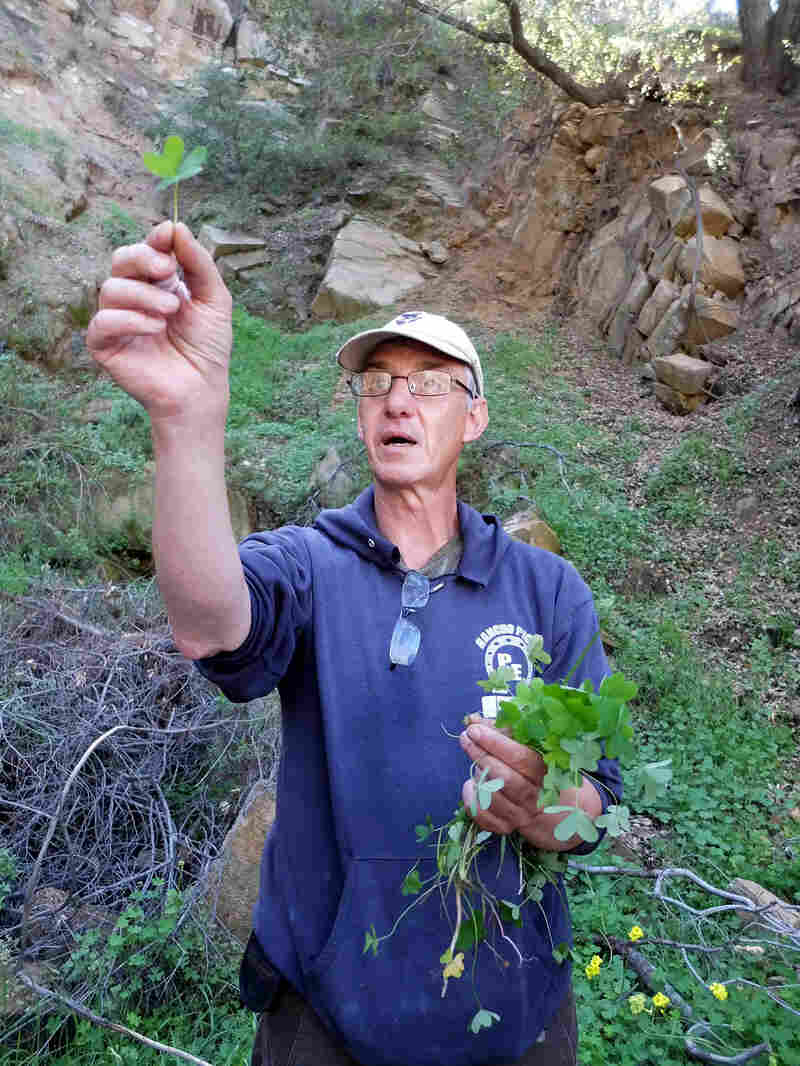 Pascal Baudar, seen on a foraging hike, is the author of The New Wildcrafted Cuisine. Jonaki Mehta for NPR hide caption

"I'm not interested in providing wild food to restaurants. It's not fun. My passion is to work with the chef," figuring out which techniques and flavors fit best with the menu, Baudar explains.

Baudar experiments with a wide range of culinary processes, inspired by everything from medieval cookbooks to Native American preservation techniques. He says his passion is to rediscover the lost flavors of Southern California.

"If you ask what California cuisine is, practically every chef will give you a different definition," says Baudar.

For instance, acorn is an abundant nut that was a staple food for California's Native Americans for thousands of years. He uses ground acorn to add a nutty flavor to meat.

On our trip into the forest, he cooks up a sweet treat for us — a dish called "pears cooked in forest floor." The fruit is cooked in a solar oven on a bed of wild grasses and herbs. We also sample what Baudar calls "trout pickled in its own environment," which involves brining trout in vinegar and plants local to the area in which the fish lived. Later, he tells me he is experimenting with cooking in sea water and candying leaves.

Baudar bridges the gap between plant identification and cooking in his recently released book The New Wildcrafted Cuisine, which deals with "what you can actually do with wild plants."

Still, Baudar wishes foraging was quite a bit less popular than it's become. 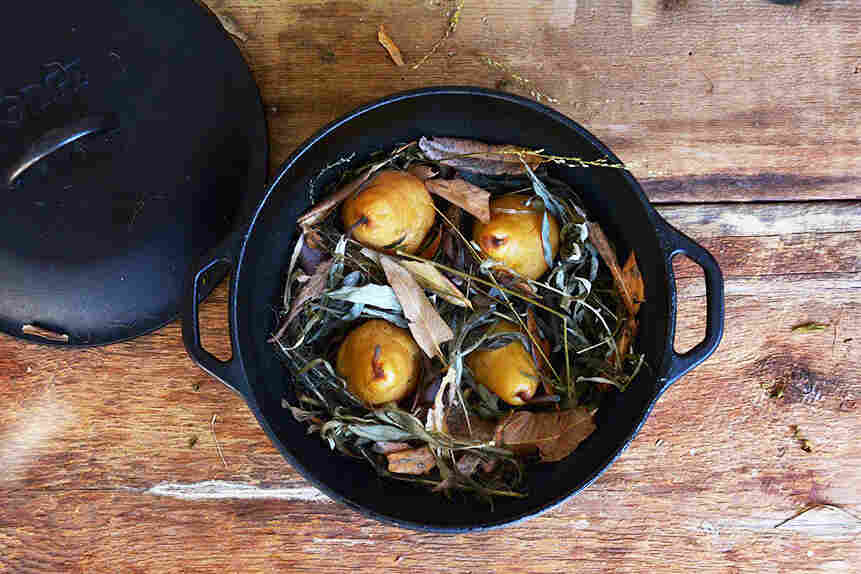 Pears cooked in forest floor: The fruit is cooked in a solar oven on a bed of wild grasses and herbs. Courtesy of Pascal Baudar hide caption 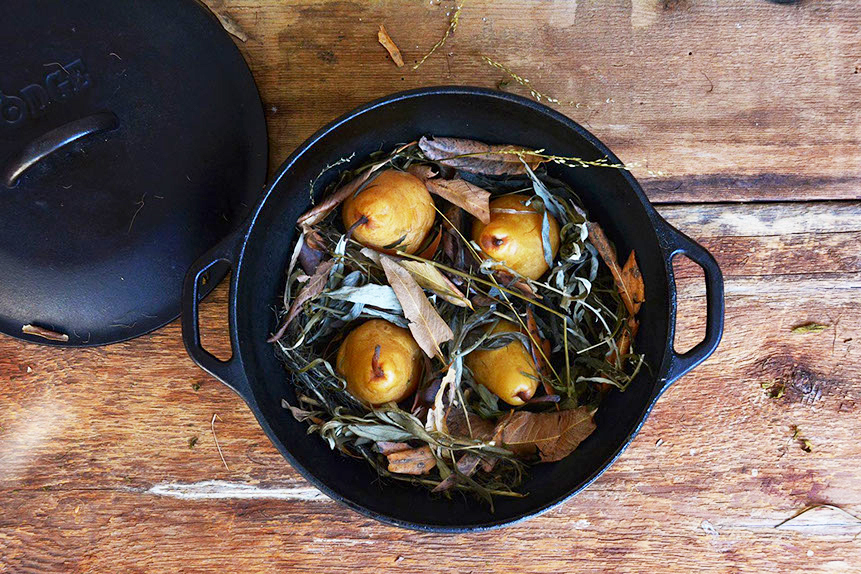 Pears cooked in forest floor: The fruit is cooked in a solar oven on a bed of wild grasses and herbs.

In parts of the world, the country, and even nearby in Northern California, foraging is turning from the hippest way to spend the weekend, to an inconsiderate trampling of local plants. Baudar shakes his head, "That's not cool." 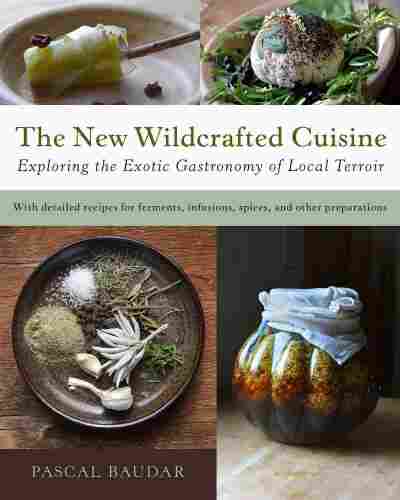 The foremost rule of foraging, he says, is that "you don't take more than 10 to 20 percent of what you find." And more importantly, mindful foragers must also be well educated about the habitats in which they forage. Knowing the habitat's ecological history, which plants are native vs. non-native (and invasive), and what the local animals rely on are all essential considerations when foraging.

Baudar says he is well-versed in identifying plants not only from research in books and on the Internet, but through developing his own senses.

"You see it, you smell it, you taste it." But, he warns, "you have to know what you're doing before you taste it." He laughs, "Poison oak, for example."

When I asked Baudar about the threat of over-foraging in Southern California, he says there are few plants that are susceptible to this. He has seen local sellers over-forage white-sage, however. But he is quick to report such people.

Baudar tells me, "A true trained forager is someone who will take care of the trees. I'm going to prune them, go to the waterways and remove blockages. ... You kind of become a steward of the forest."

I leave Angeles National Forest feeling worlds away from the fancy restaurants and buzzing streets of Los Angeles, with the taste of those wild-cooked pears still lingering in my mouth. Baudar assures me that there are many more flavors to explore.

"In Southern California very, very few people are using wild plants in cuisine," he says, adding, "There is so much more to experiment with!" Like white sage, mallow — an herb with an okra-like flavor — and even an insect secretion called lerp that he uses as a sugar.

As Baudar says, "So many wild plants! So little time!"