Accessibility links
GMOs Are Safe, But Don't Always Deliver On Promises, Top Scientists Say : The Salt A new report from the National Academy of Sciences knocked down some pro-GMO claims, such as that they've boosted crop yields, and urged federal agencies to change the way these foods are regulated. 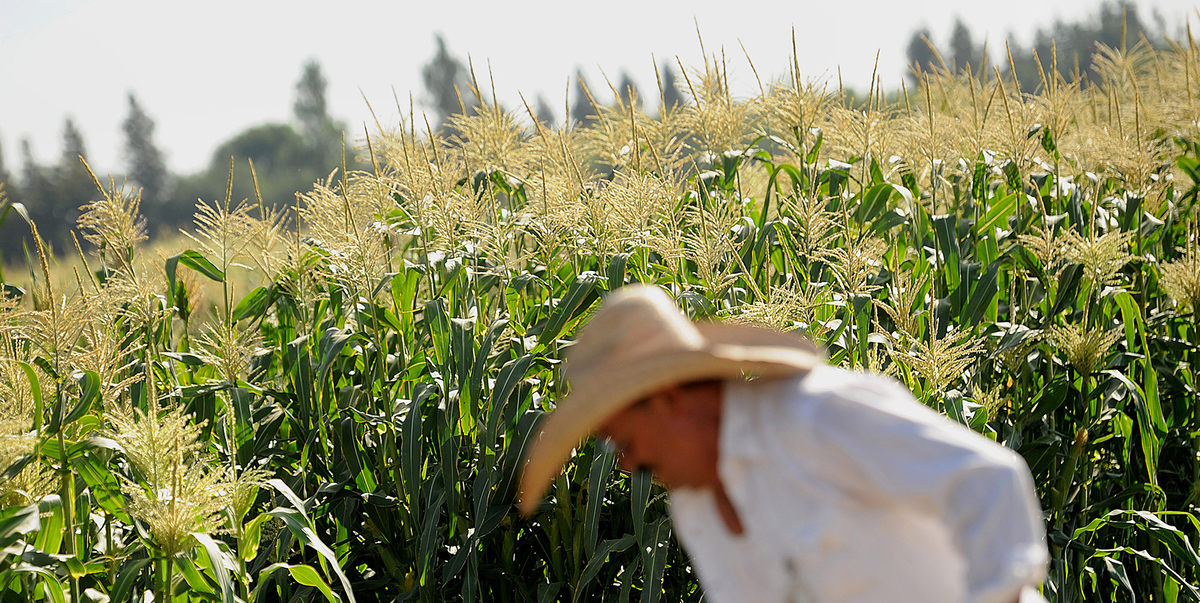 Worker Javier Alcantar tends to crops at the Monsanto Co. test field in Woodland, Calif., in 2012.

The National Academy of Sciences — probably the country's most prestigious scientific group — has reaffirmed its judgment that GMOs are safe to eat. But the group's new report struck a different tone from previous ones, with much more space devoted to concerns about genetically modified foods, including social and economic ones.

The report marks an anniversary. Twenty years ago, farmers started growing soybeans that had been genetically modified to tolerate the popular weedkiller known as Roundup and corn that contains a protein, extracted from bacteria, that kills some insect pests.

In the years since, arguments about these crops have grown so contentious that the National Academy can't be sure that people will believe whatever it has to say on the topic.

Even before this report came out, an anti-GMO group called Food & Water Watch attacked it. The group accused some members of the committee that prepared the report of receiving research funding from biotech companies, or having other ties to the industry.

"The makeup of the panel is pretty clear. People are coming in with a perspective that is pro-genetically engineered crop," says Patty Lovera, assistant director of Food & Water Watch.

The preemptive attack frustrates Fred Gould, the North Carolina State University scientist who chaired the committee. Gould has been known in the past as a GMO critic. He has pushed for restrictions on the planting of some GMO crops. "I have not been a darling of the industry. As a matter of fact, they denied me seeds and plants to do my experiments," he says.

Gould says that over the two years that he and the other members of this committee worked on this report, they had one important rule: "If you had an opinion, you had to back it up with data. If you didn't have the data, it didn't go into the report."

The report tries to answer a long list of questions about GMOs, involving nutrition, environmental effects, effects on the farm economy and monopoly control over seeds.

The most basic conclusion: There's no evidence that GMOs are risky to eat.

The committee also found that GMOs, as promised, have allowed farmers of some crops to spray less insecticide to protect their crops — although there's a risk that the GMO crops may not work as well in the future, because insects could develop resistance to them. Also, there's no evidence that GMOs have reduced the amount of wild plant and insect life on farms.

And the report found that some claims about the benefits of GMOs have been exaggerated.

For instance, the productivity of crops has been increasing for a century, and that didn't change when GMOs came along. "The expectation from some of the [GMO] proponents was that we need genetic engineering to feed the world, and we're going to use genetic engineering to make that increase in yield go up faster. We saw no evidence of that," Gould says.

The report urges federal agencies to change the way they regulate GMOs. Up to now, companies have introduced just a small number of different kinds of genetically modified crops. That could change very soon, because there's new technology, called gene editing, that isn't exactly genetic engineering, but it's not traditional plant breeding, either.

The report urges regulators to look at all new crops, no matter how they're created, if they "have novelty and the possibility of some kind of risk associated with them," Gould says.

Many scientists who got their first look at the report Tuesday praised it. Some called it the most comprehensive review of GMOs that anyone, so far, has carried out.

But longtime critics of GMOs were less impressed.

Patty Lovera, from Food & Water Watch, the group that attacked the National Academy's committee for being too closely linked to industry, took a quick look at the report and didn't see much that seemed new. "It's not the final word" on GMOs, she says.

The National Academy of Sciences is trying to make this report more easily accessible to the public. It has set up a website where people can read the report and also look up the sections that address specific comments that were submitted by the public.