Accessibility links
Can A Tiny Wasp Save The Citrus Industry From Citrus Greening? : The Salt Citrus greening, spread by a ravenous pest, has destroyed millions of acres of fruit and cost billions in damage. Fortunately, these pernicious peewees are prime prey for another parasitic predator.

Can A Tiny Wasp Help Save The Citrus Industry?

Can A Tiny Wasp Help Save The Citrus Industry? 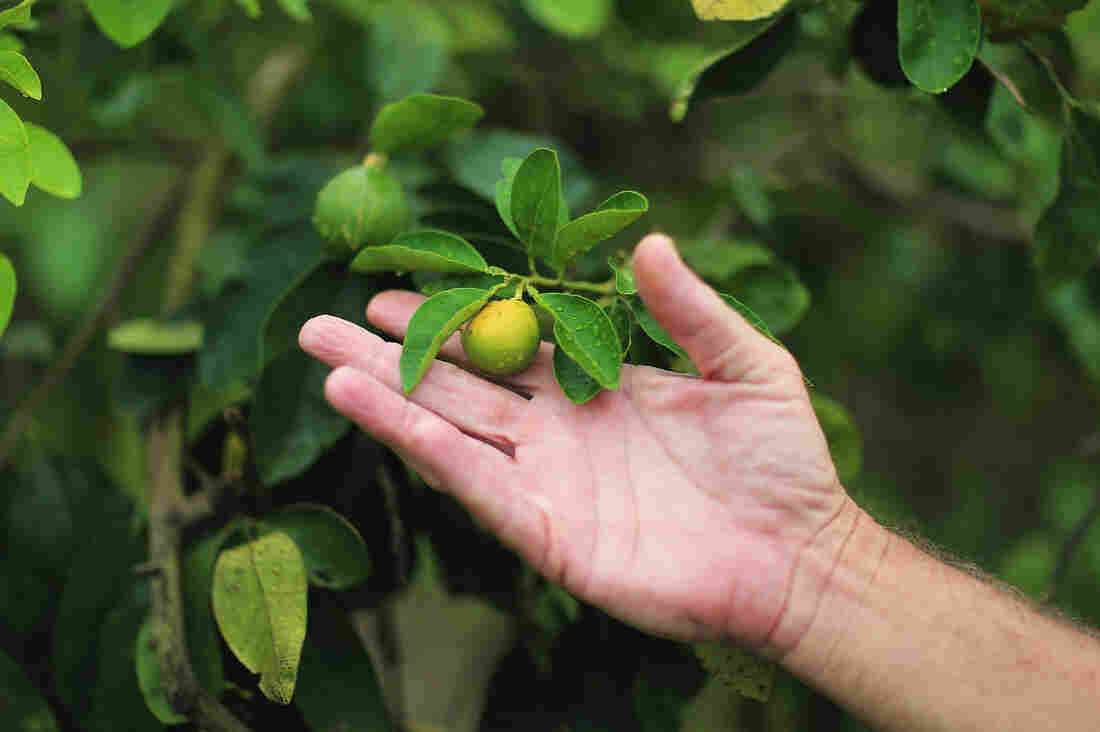 Guy Davies, an inspector of the Florida Division of Plant Industry, shows an orange that is showing signs of "citrus greening." The disease is caused by a bacterium carried by the Asian citrus psyllid. Joe Raedle/Getty Images hide caption 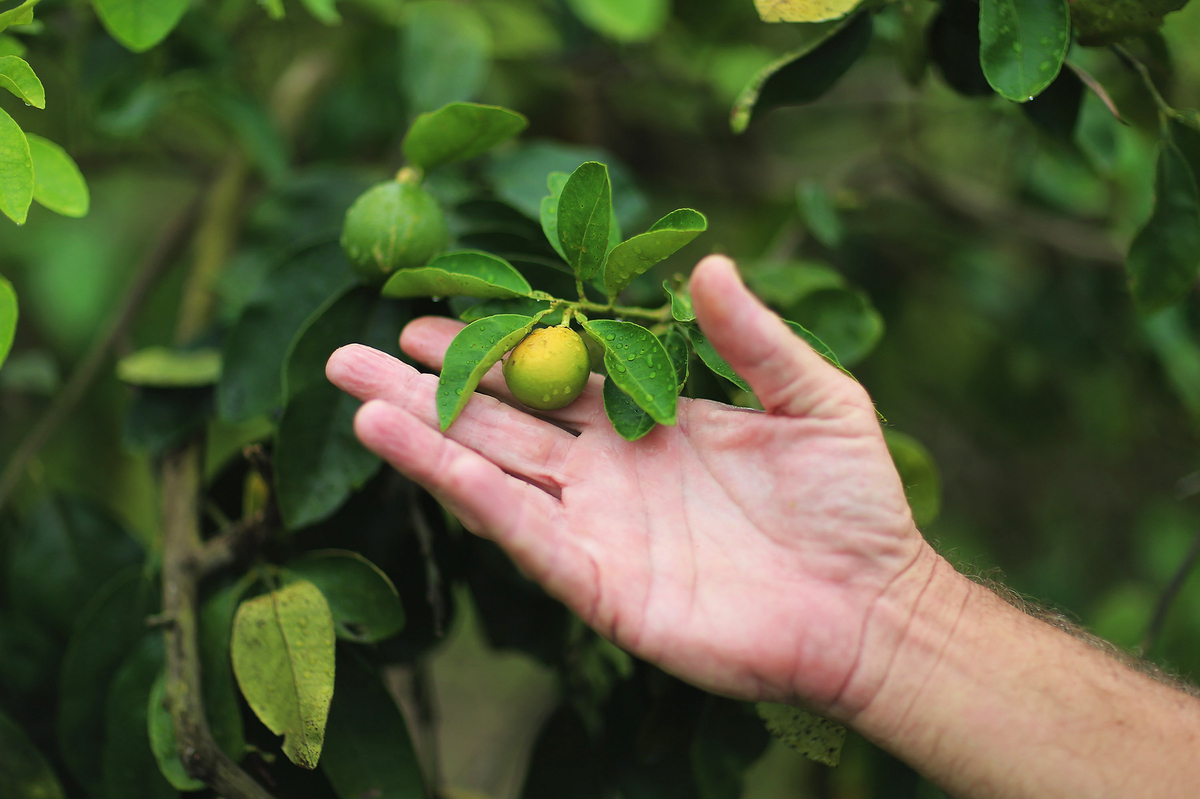 Guy Davies, an inspector of the Florida Division of Plant Industry, shows an orange that is showing signs of "citrus greening." The disease is caused by a bacterium carried by the Asian citrus psyllid.

Researchers in Arizona are fighting fire with fire. They're collecting new data on a wasp that may help slow the spread of citrus greening, a plant disease that has devastated millions of acres of citrus crops, particularly in Florida.

The disease is spread by the Asian citrus psyllid, an insect which is no bigger than the head of a pin. The psyllid feeds on citrus trees and carries in its gut the bacteria that cause greening. Leaves become twisted and fruit becomes withered and unusable. Once a tree is infected, there is no cure. Eventually, it dies.

The parasitic wasp, Tamarixia Radiata, is a predator of the Asian citrus psyllid. The wasps are so tiny that scientists can ship 200 of them in a vial about the size of a photo film canister. 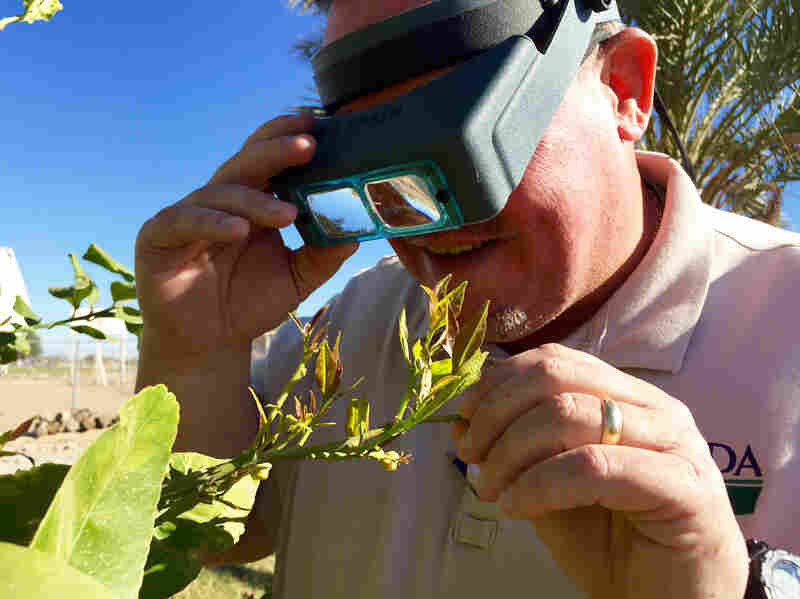 Bobby Baker, a technician with the U.S. Department of Agriculture, looks for the Asian citrus psyllid on a lemon tree in Yuma County, Ariz. Amanda Solliday/KAWC hide caption

Bobby Baker, a technician with the U.S. Department of Agriculture (USDA), has been receiving weekly shipments of the vials.

"They arrive in a cooler, and they're chilled ... so it keeps them dormant," Baker says.

The insects come from Pakistan. They are reared in a University of California-Riverside laboratory and sent to Baker. He and an Arizona Department of Agriculture inspector release the wasps at sites in Yuma and Mohave counties.

"We're lucky because here in Yuma County ... we have not found the disease yet," Baker said.

The Asian citrus psyllid resides in parts of Arizona, but not the disease. Citrus quarantines are in place in seven of the state's counties to prevent the spread of the insect.

But greening has been discovered just next door in residential trees in California.

The disease has already wreaked havoc upon the $10 billion citrus industry in Florida, where scientists are trying to produce greening-resistant trees through conventional breeding. The problem is that these trees will require years of testing. So researchers are looking in several directions for solutions, and each piece may help the larger effort to find a remedy for the disease.

Greg Simmons, a USDA entomologist, is the project leader tasked to find biological control agents for the Asian citrus psyllid in Arizona.

"It's a field ... we call classical biocontrol, where we try to establish a new agent in the environment and sort of reunite a natural enemy with its pest species that it has evolved to attack," Simmons said.

Tamarixia only attacks the Asian citrus psyllid, something known as host-specificity.

A parasitic wasp finds a host and lays eggs inside its body. When the eggs hatch, new wasps emerge and kill the host as they exit.

The goal is for the wasps to remain in the environment as long as the Asian citrus psyllid is around. The Arizona Department of Agriculture and USDA are monitoring the entire state to find psyllids and respond to any new infestations.

"We think hot summers in the Yuma area probably limit the psyllid population a little bit," Simmons says, but he adds that the pest can reproduce well in spring and fall, and in cooler microclimates. This means the insect still poses a risk to the citrus industry and backyard citrus in Arizona.

The experimental trees for the trials in Yuma County are all located in residential areas — with permission from homeowners. And the wasps have already established populations at other Arizona sites.

It's spring, and new tree growth attracts the psyllid.

"This would be an ideal place for them, right here," Baker said. "This new growth is like perfect territory for them."

So far, there is feeding damage but no psyllids. Baker said the tiny wasps can spot their prey better than we can. 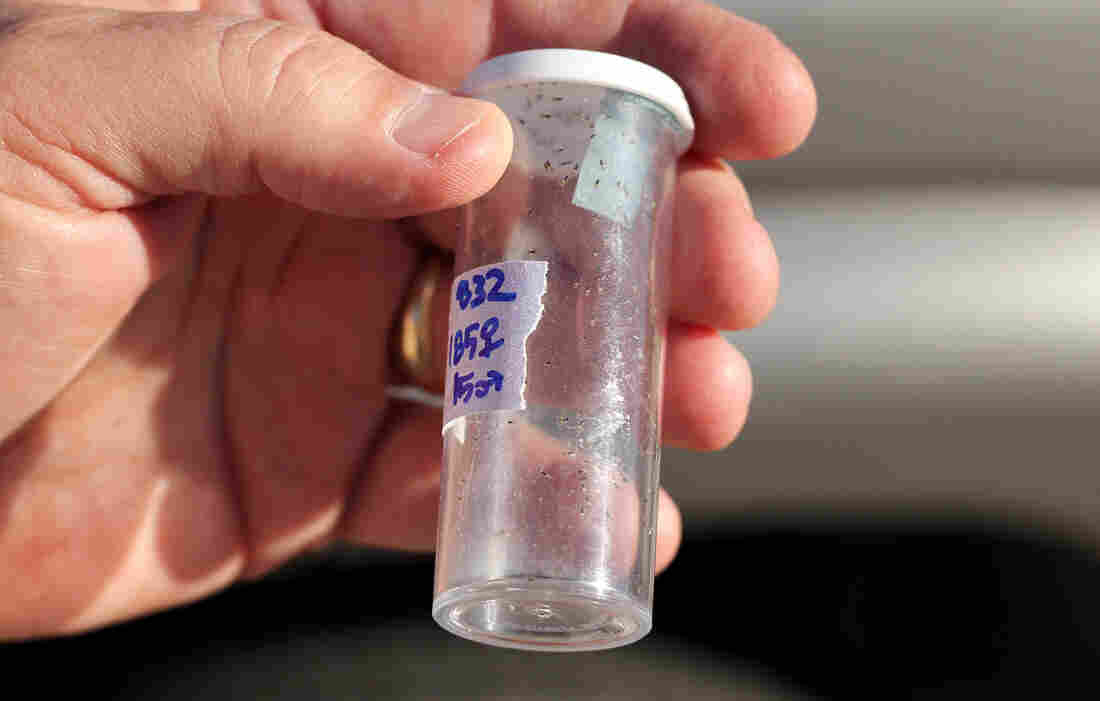 This story comes to us via NPR's Here & Now. A version first aired on member station KAWC.