Accessibility links
On The Trail Of The Wily Wild Hog : The Salt These descendants of wild boars were brought over from Europe decades ago. They're highly invasive and hugely destructive — threatening native bears and deer in Great Smoky Mountains National Park. 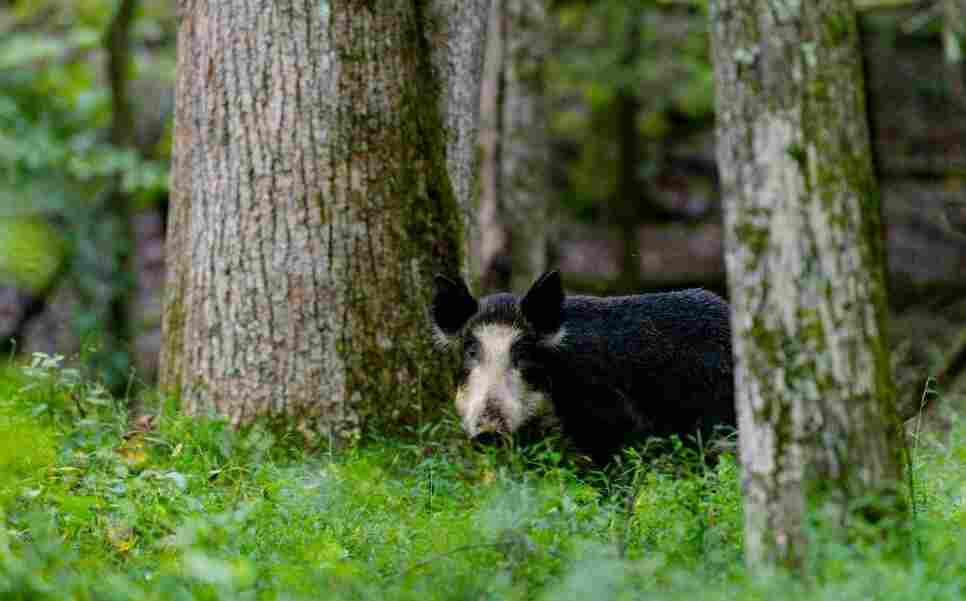 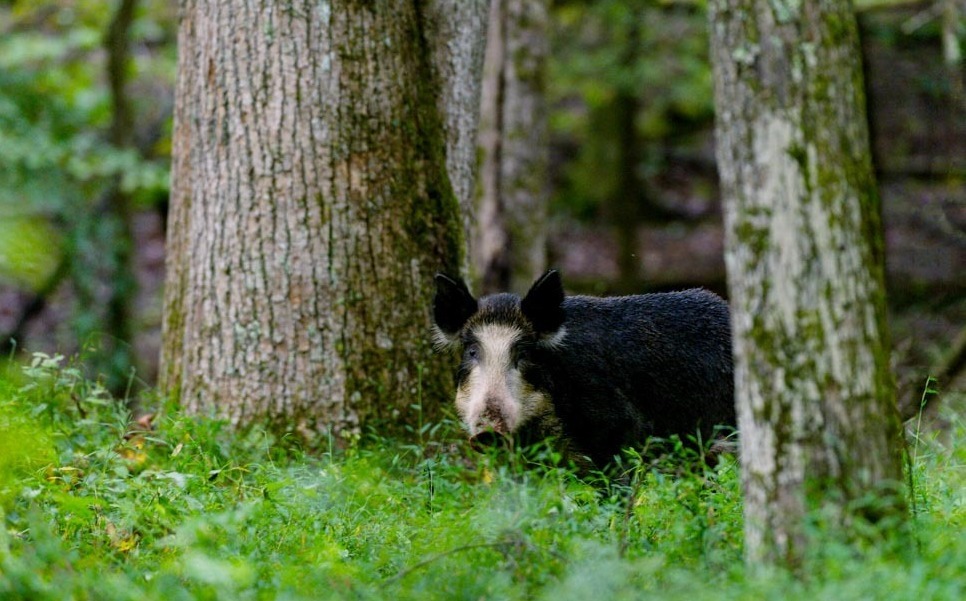 Under almost every circumstance, hunting is strictly prohibited in our national parks. But there's an exception at the park we're about to visit. Great Smoky Mountains National Park runs an aggressive hunting program for an invasive and hugely destructive species, wild hogs. NPR'S Nathan Rott went out with one of the park's hog hunters for a day and brings us this story.

NATHAN ROTT, BYLINE: It's a short boat ride from North Carolina to the south end of Great Smoky Mountains National Park. You can find wild hogs just about anywhere in the park. That's part of the problem. But this time of year, a good place to catch them is down in the cool, narrow valleys, or draws, that rise up from the lake.

ANDREW HERRINGTON: It's about a half-mile we're going to walk up through there to these traps.

ROTT: This is Andrew Herrington, hog hunter and wild life tech at the Great Smokies. He's got an orange-red beard with a shock of gray on the chin and a faded green baseball cap lined with salt stains. We'll be with him all day. He's gearing up and explaining that we're going to check some baited traps he set first.

HERRINGTON: The good thing about traps is they work for you 24/7, so...

ROTT: Herrington puts on a backpack, stashes the butt of his rifle under the nook of his arm, and we're off. 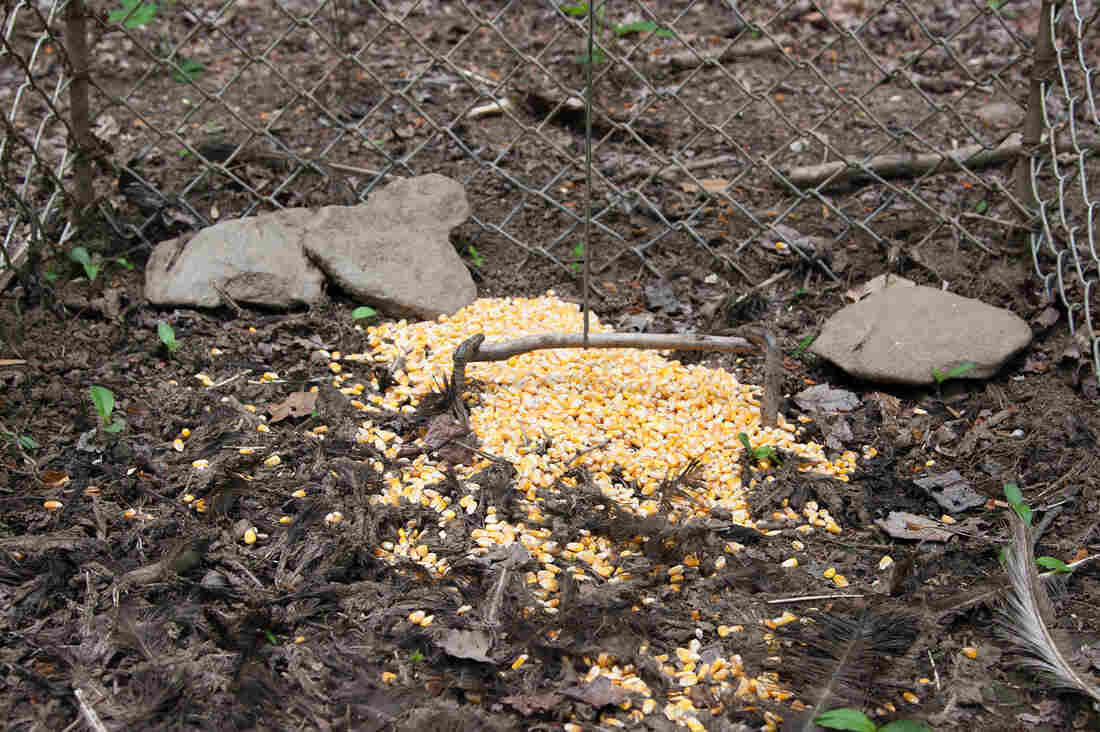 A hog trap with corn on the inside. Nathan Rott/NPR hide caption

Now, the first thing you should know is that the hogs we're after are not your Farmer John variety oinkers. They weigh more than 100 pounds on average. They're covered in fur. And they're not native to this region - or even this country. They are descendants of wild boars brought over from Europe decades ago by people who wanted to hunt them. Feral hogs breed fast, and they're adaptable. So it didn't take long for their population to explode in these forests. The problem with that is...

HERRINGTON: If you've got the native species - bears, turkeys, deer - competing for the same food, you know, they just get outcompeted.

ROTT: It's a war of attrition that native species cannot win. So Herrington puts it this way to people who question what he does, a list that includes his wife, a vegetarian and wildlife lover.

HERRINGTON: Do you like baby bears, or do you like pigs? Because every time I pull the trigger, a baby bear gets to live.

ROTT: So she doesn't mind it that much? 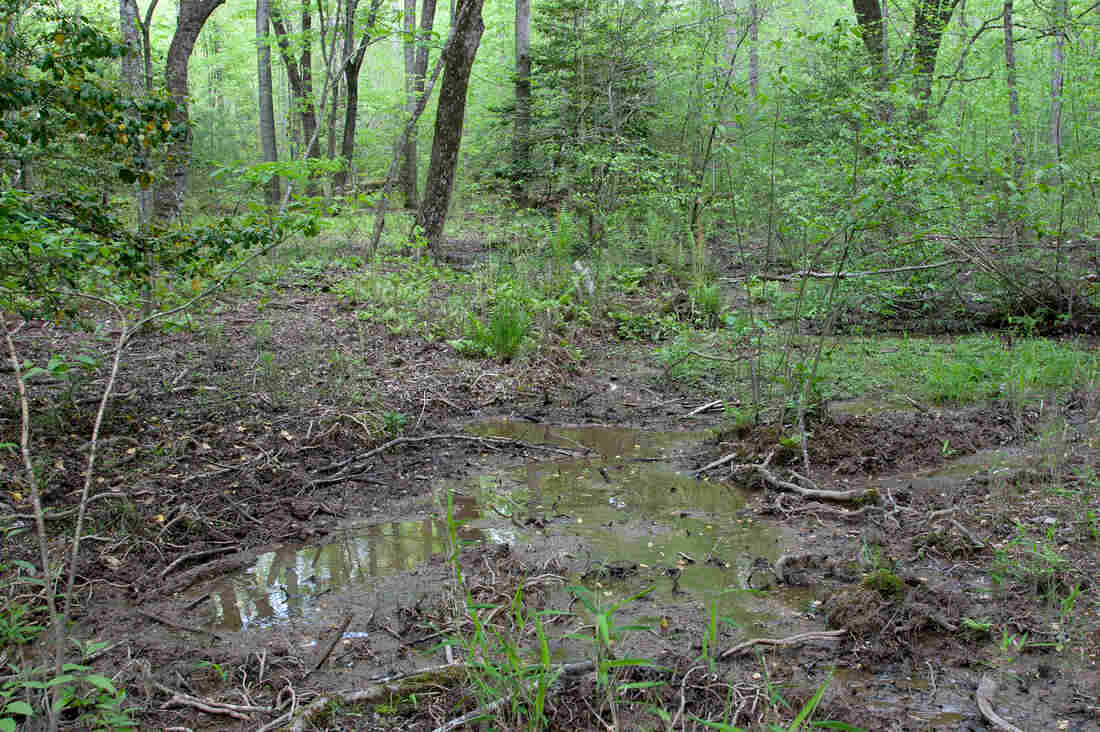 A wallow demonstrates the damage that hogs can do to the environment. Nathan Rott/NPR hide caption

HERRINGTON: Have you seen these traps yet?

ROTT: It's a chain-link cage with one open side and a metal sheet above it. A trail of corn kernels leads to a pile at the cage's far end.

HERRINGTON: So when he comes in, he roots.

ROTT: And then a hog hunter like Herrington finished it off. The Park Service doesn't advertise this. It's controversial to hunt anything in national parks, no matter how destructive it is. There was a time when they transported hogs out of the park to address this. But that presents issues for the state's pork industry because these wild hogs often carry disease. And it's just not a very worker-friendly practice. 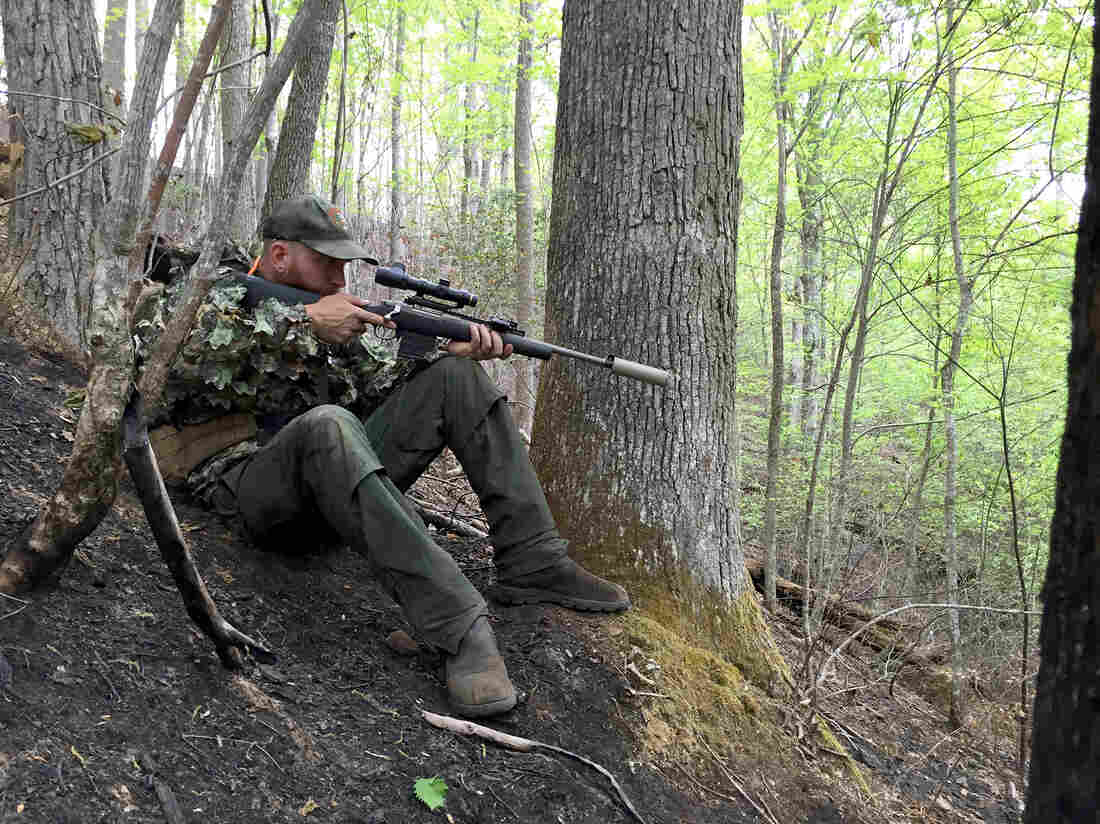 HERRINGTON: Yeah, you want to talk about fun. Try carrying a 225-pound boar out.

ROTT: We check a few more traps and don't see any hogs. But we see plenty of proof that they've been here, places where the forest floor is all torn up like it's been plowed. Hogs will do that close to streams to create what are called wallows, mudholes that they can cool off in. The runoff can poison a creek, killing trout and insects.

(SOUNDBITE OF SOLID THEN MARSHY GROUND BEING STOMPED)

HERRINGTON: Oh, yeah. I mean, it's a great example, you know.

We work our way back to the boat and head to a new inlet in a part of the forest where a big wildfire was burning the week before. The ground is black. The air smells like smoke. You can see further in the forest with the vegetation burnt out. We tie off the boat and Herrington throws me a mesh camouflage jacket. He says this stop is going to be different. We have to walk quietly, talk quietly. When he stops, I stop. This time, we're hunting.

We head up a steep hillside, zigzagging our way up to the blackened ridge above. Every few minutes, sometimes less, Herrington stops in midstride.

A few stops later, he waves me forward and points to some charred acorns on the ground by his boot.

HERRINGTON: Definitely food here. We're just going to get on top of this ridge line (inaudible) since the winds are so swirly. Wind was blowing straight up that drainage.

ROTT: This happens a few more times on the ridge - stop, pause, wave forward - once for some rooted up ground, another for a car-sized depression around a tree.

HERRINGTON: This was probably a bedding area before the fire.

ROTT: Hours later, we're down in the valley below and we see a big wallow.

HERRINGTON: (Whispering) So it's the freshest we've seen.

ROTT: So much for dry feet.

About halfway down the draw, Herrington stops and waves me to sit with him on a fallen log. He points to the leaves on the ground.

HERRINGTON: When they're in this dry later, you can hear them for - like, you'd be able to hear them...

ROTT: We sit and whisper back and forth for about 10 minutes...

HERRINGTON: Sitting up here on a...

The 1998 Story That Started It All

A previous version of this story misspelled Herrington as Harrington.