Accessibility links
Vegetable Orchestra Musicians Literally Play With Their Food : The Salt It turns out beans aren't the only musical fruit. The London Vegetable Orchestra is one of many musical acts that uses all sorts of fruit and veg to produce sweet (and savory) sounds.

Check Out These Musicians Who Literally Play With Their Food

Check Out These Musicians Who Literally Play With Their Food 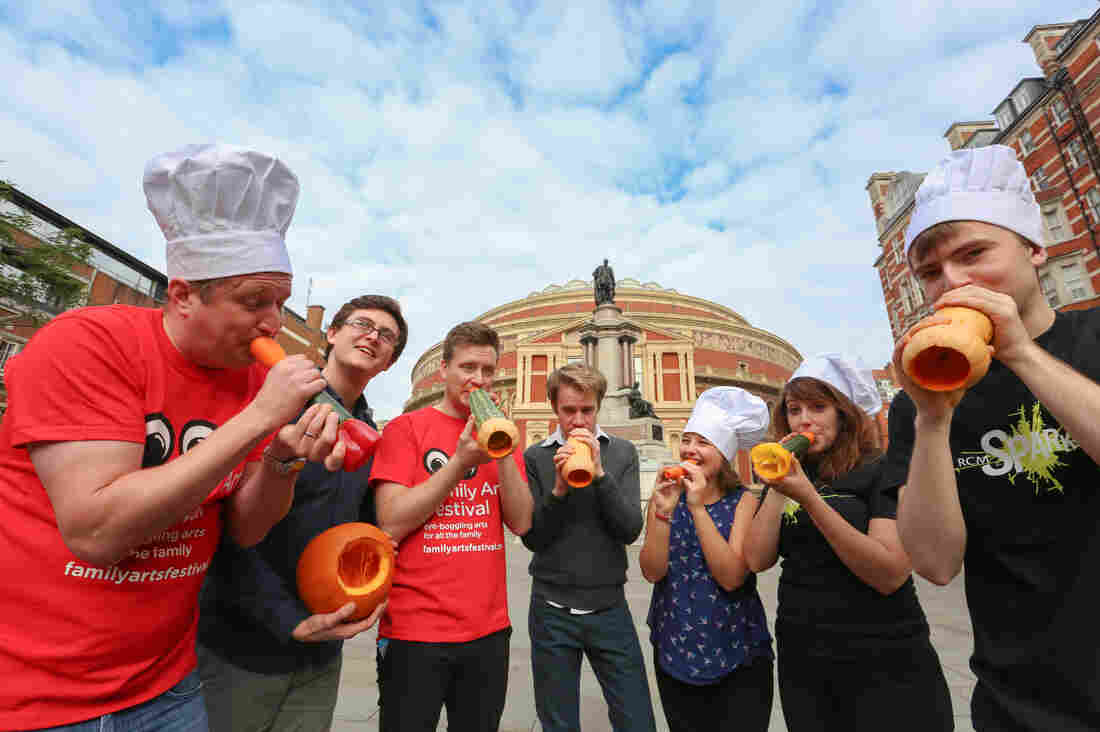 The London Vegetable Orchestra strikes up a tune at the Royal Albert Hall in London. Christie Goodwin/Getty Images hide caption 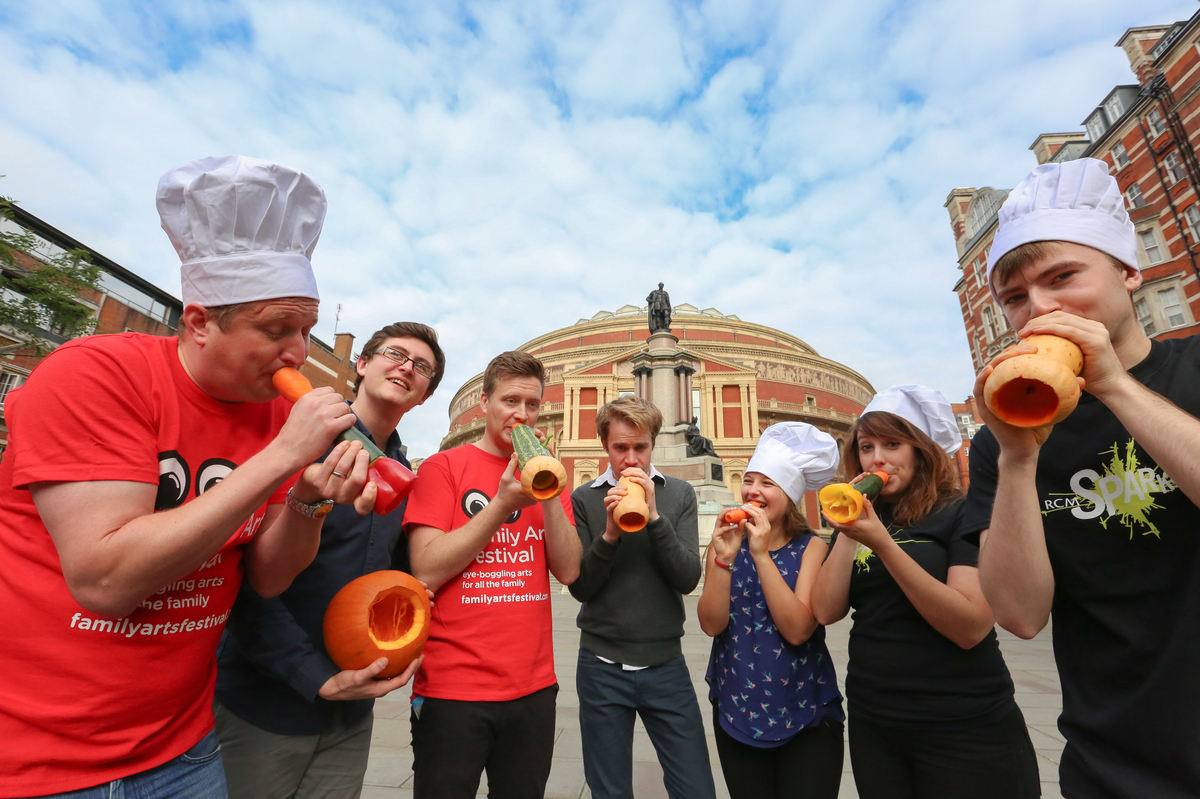 The London Vegetable Orchestra strikes up a tune at the Royal Albert Hall in London.

It started off as a bet.

Tim Cranmore — a British recorder maker — was out at a pub with some friends. They wagered that he couldn't possibly make a working recorder out of a carrot. He accepted the challenge.

And that's when he cooked up the idea for the London Vegetable Orchestra.

This Music Is Bananas (Really)

"It's a bizarre gig," says lead butternut trombonist Faye Treacy. "Most people don't believe that this is actually something I do."

Treacy, who was inducted into the orchestra by her friend while she was studying at the Royal Academy of Music, has a more serious day job playing the traditional, non-edible trombone. Other members of the orchestra — most of whom got together as music students — play with the Royal Philharmonic Orchestra and the London Symphony.

The vegetable orchestra is more of a passion project for everyone, Treacy says. The group has been going for seven years now. Their repertoire includes unique takes on classics, like "Greens-leaves," as well as more modern stuff. They do a gourd-eous rendition of Michael Jackson's "Billie Auber-jean."

"We do mostly corporate gigs and school events," she says. For those occasions, she crafts her veggie trombone by hollowing out a butternut squash and fitting it with a carrot mouthpiece.

"The mouthpieces are the most fiddly. You have to really get that exact — you can't have any air escaping," she says. The orchestra has also experimented with parsnips (which don't sound as good) and yams, which "actually make a really nice bass sound," Treacy adds.

Their gigs — as well as their instruments — tend to be seasonal. "Autumn is our busiest time of year," Treacy says. That's convenient, because it's also when the supermarkets stock the best trombones ... er, squashes.

There is one downside to playing in a vegetable orchestra. "I used to make quite a lot of butternut squash soup and such with the leftovers from the instruments," Treacy says. "But now I hate butternut in my food."

Treacy and her band mates aren't the only musicians who play with their food. In fact, Modern Farmer recently published a roundup of performers who produce music with produce. There's the Vienna-based Vegetable Orchestra — whose members compose original tunes to play on their veggie instruments — and Chinese brothers Nan Weidong and Nan Weiping, who play duets on an array of fresh produce. Top-notch solo acts include YouTube-famous Japanese schoolteacher Junji Koyama and Australian composer and instrument-maker Linsey Pollak.

So turnip the volume on your headphones and check out some of our favorite musicians who march to the beet of their own drums.

Pollack may play with vegetables, but he's definitely not green. He's a skilled musician, composer and instrument-maker with decades of experience. And he has a knack for making instruments out of unexpected materials. His oeuvre includes tunes played on a condom bagpipe and a baseball bat woodwind. But he really excels on the carrot clarinet.

The Vienna-based Vegetable Orchestra, which was founded in 1998, is serious about music. "This is not a just-for-fun project," the orchestra's website insists. The FAQ section on the site also says, "we are working on world domination." I'm not quite sure what to make of that.

What I am sure of: Their latest album, Onionoise, is gold.

Koyama is a Japanese elementary school teacher by day, whimsical vegetable composer by night. He's been posting YouTube videos of himself playing all sorts of fruits and vegetables for almost a decade, and he even stars in an advertisement for Tutti Frutti smoothie mix. (He plays an apple ocarina, accompanied by a toy monkey percussionist.)

The Nan brothers make for a formidable pear of musicians. They grew up on a farm, and their dad was a music teacher. So, making and playing vegetable instruments comes naturally for them. They play traditional Chinese riffs on carrot-leek pan flutes and bok choy. My favorite part of this video is the bit when they start munching on the produce as they're carving out the instruments.