Accessibility links
Can Planting More Milkweed Save Monarch Butterflies? It's Complicated : The Salt Conservationists have long blamed farmers' use of pesticides for decimating the milkweed that monarch caterpillars like to eat. But scientists say simply planting more milkweed isn't the answer.

Can Planting More Milkweed Save Monarch Butterflies? It's Complicated

Can Planting More Milkweed Save Monarch Butterflies? It's Complicated 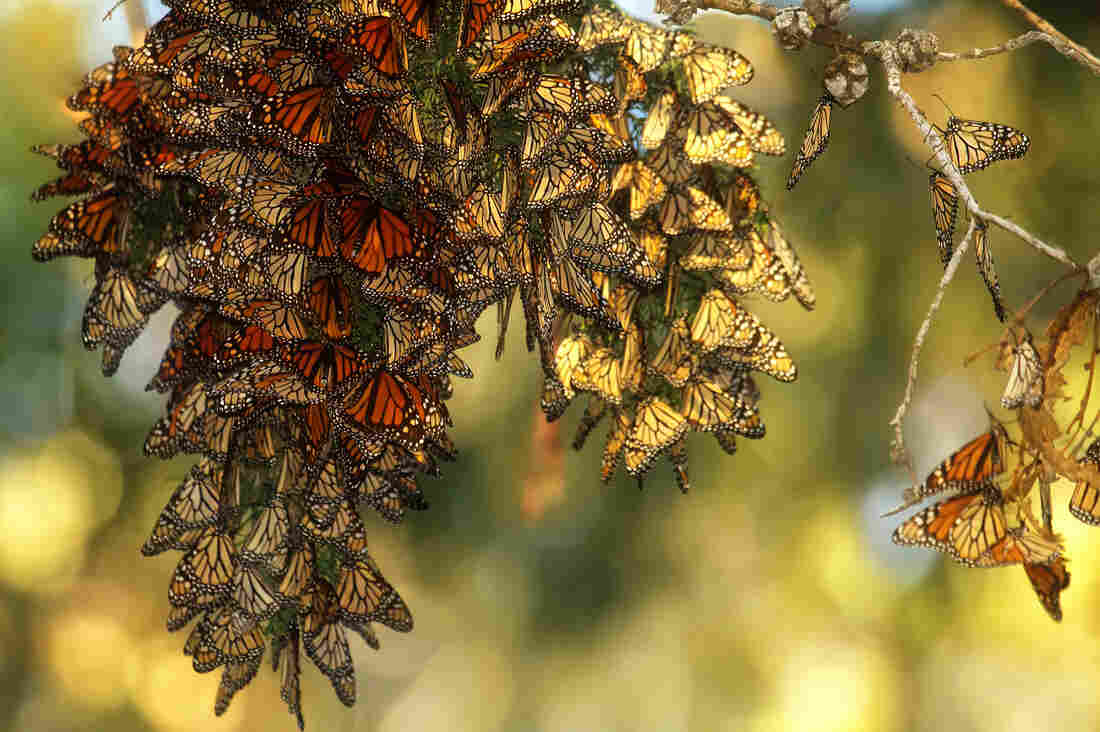 Monarchs spend their winters in the central mountains of Mexico before traveling up through the United States to Canada. Sandy and Chuck Harris/Flickr hide caption 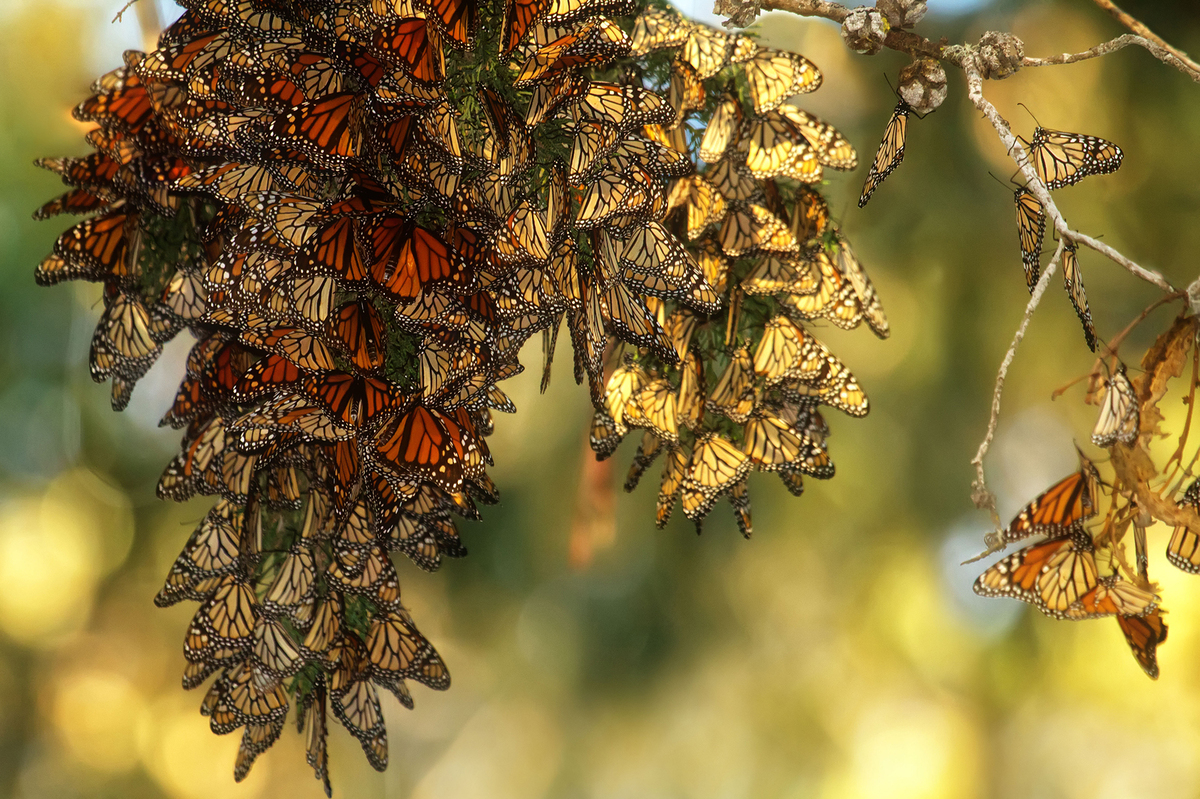 Monarchs spend their winters in the central mountains of Mexico before traveling up through the United States to Canada.

Populations of these distinctive black and orange migratory insects have been in precipitous decline for the past 20 years, but scientists aren't exactly sure what's causing them to vanish.

So far, potential culprits include disease, climate change, drought and deforestation. Everyone from loggers to suburban developers has been implicated. But much of the blame has been placed on farmers and the pesticides they rely on — pesticides that have reduced the milkweed that monarch caterpillars feast on. Now, however, scientists say that may not be the full story.

Every spring, hundreds of thousands of monarchs sweep across the Great Plains from Mexico to Canada, and then back again in the fall. It's an amazing journey, one that takes place over multiple generations for the butterflies. The insects breed while traveling north, expending four generations to make it to Canada. The final generation then flies all the way back to Mexico to spend the winter there.

Monarch populations are measured in hectares (roughly 2 1/2 acres). Surveys of their wintering habitats in the central mountains of Mexico show dense populations of monarchs at an average of more than nine hectares during the winters from 1995 to 2002. In 2014, monarchs took up less than one hectare.

Since the late 1990s, scientists have been trying to find the pinch point for monarchs: the spot along their migration where they run into trouble.

"Monarch caterpillars feed exclusively on milkweed plants, so people always thought that the decline in milkweed is causing the decline in monarch butterflies," says Hidetoshi Inamine at Cornell University, a doctoral student in evolutionary biology and ecology.

Milkweed is actually a class of more than 100 varieties of leafy green plants, so named for the milky sap that oozes from its stem when snapped. It's literal lifeblood for the monarch caterpillars, serving as the insect's sole food source early in its life cycle. But since the plant serves no utility for Midwest farmers, it is often plowed under, pulled out or blasted with herbicides.

However, so far, according to a recent National Academy of Sciences report on genetically engineered crops, scientists haven't been able to prove that disappearing milkweed is causing the caterpillars to starve.

And Inamine's recent paper suggests that declining milkweed may not be the biggest threat to monarchs.

He and a team of researchers found that most of the monarch decline is happening when the butterflies turn around in Canada to head back south, no longer reliant on milkweed. Fully grown butterflies feed on other plants, especially flowers laden with nectar. With some nectar-bearing plants also on the decline, Inamine says that could be a far greater threat to the mature butterflies than the decrease in Midwestern milkweed.

Still, Inamine notes, "we don't know what's causing the decline per se." Studies suggest that a combination of factors — including habitat fragmentation, severe weather, climate change, disease and deforestation — could be to blame.

Even if milkweed isn't the likely bottleneck, scientists say planting more of it could give populations a boost as they travel north across the Great Plains.

Bob Trout is one of those volunteer leaders. He's the head of the Loveland Initiative for Monarch Butterflies, out of Loveland, Colo. On a windy, rainy spring morning, he was decked out in a bright orange jacket, working along the banks of the Big Thompson River. Trout is a big fan of monarchs.

"They are gorgeous. They are just absolutely gorgeous butterfly caterpillars," Trout says. "And the chrysalis — with the jade green with the gold dots around the rim — is just fantastic-looking." 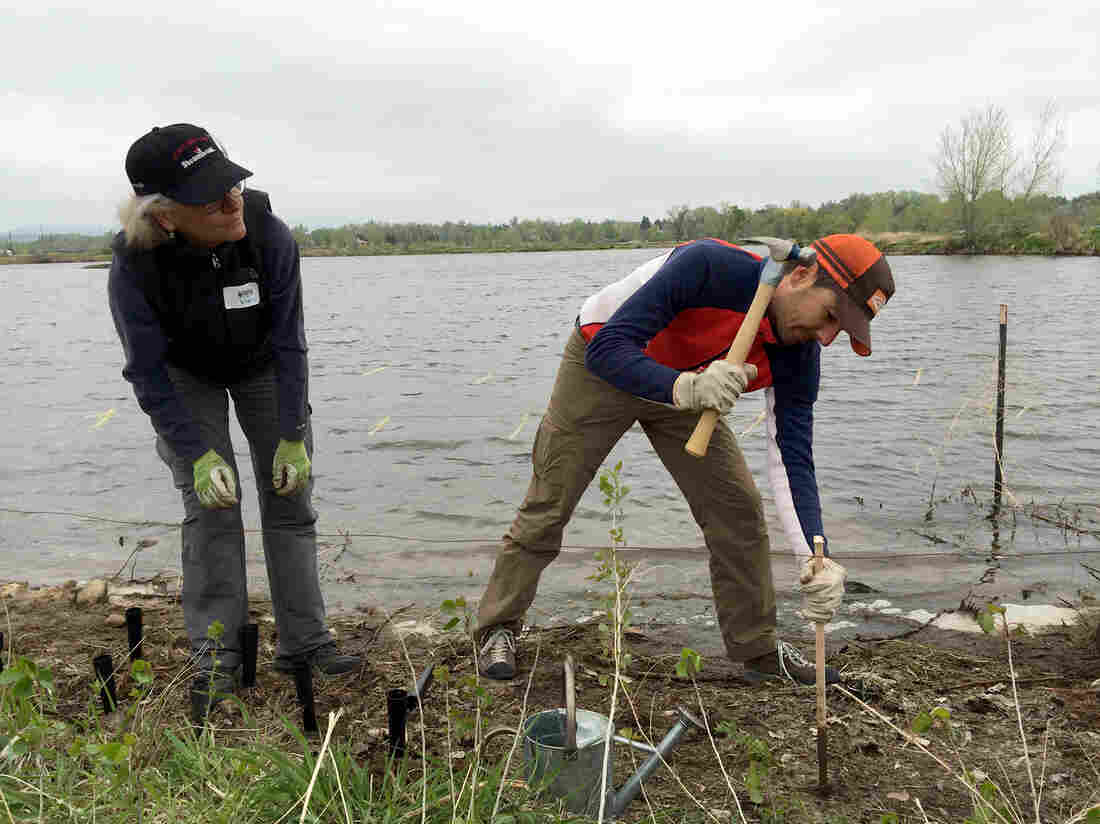 He's in charge of a team of volunteers, here to plant the edges of small ponds and the river's banks with milkweed. Volunteers use hammers and stakes to make holes in the hard-packed soil.

Trout mentions the use of glyphosate, more commonly known as Roundup, the ubiquitous herbicide sold by agrochemical giant Monsanto, as a possible cause of monarch decline. Studies have shown milkweed abundance declined by 58 percent from 1999 to 2010. Without milkweed, Trout says, how are monarchs to flourish in a crucial migration corridor?

There's still "no consensus among researchers that increased glyphosate use is not at all associated with decreased monarch populations," according to the NAS report.

In the interim, some of the largest agrochemical companies in the world are stepping up to incentivize farmers to not only plant milkweed, but keep butterfly habitat from fragmenting even further. 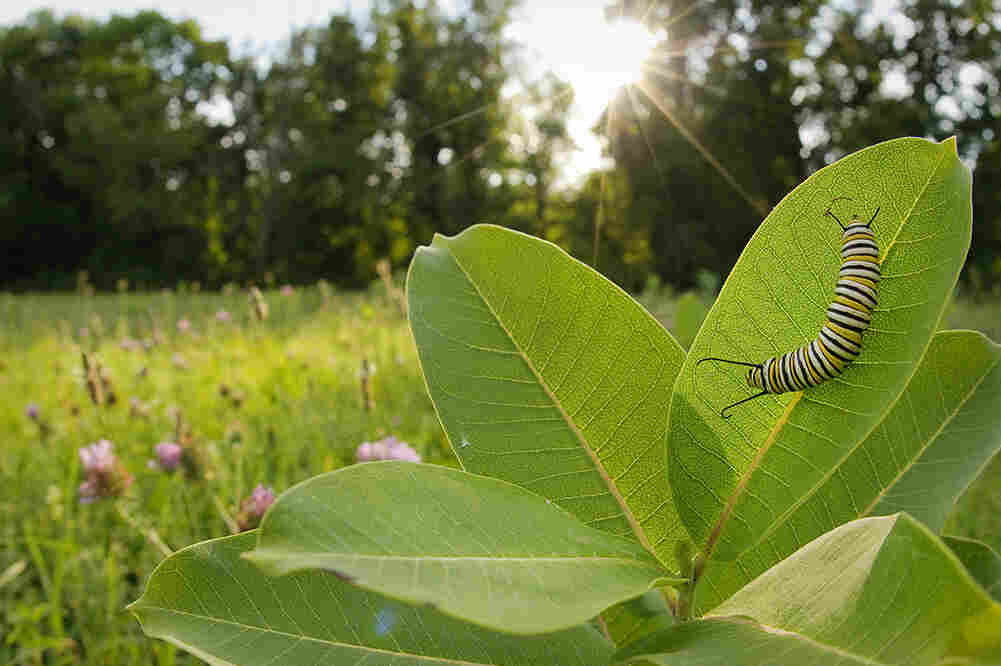 Savinelli is part of a group of conservationists, ag companies and farm groups trying to restore and protect some habitat in the Midwest to provide both more milkweed and more nectar plants for monarchs as they migrate north and south. She says farmers are receptive to keeping more butterfly habitat intact, but it has taken some convincing.

"In the case of milkweed, after telling them for the past 30 years, 'You need to eliminate it,' now we're saying, 'Bring it back.' So there's going to be some learning, for sure," Savinelli says.

Back on the banks of the Big Thompson River in Loveland, Colo., Mary Pullen and her son Nick Balla are pulling tiny milkweed plants from their containers and planting them in the ground.

"I'm not going to be able to go out and fight the big agriculture concerns," Balla says. "But if there's a little corner where it would be deemed effective to plant milkweed and that could possibly help, then great."

While scientists argue about where and when monarchs are being hurt during their migration, Pullen will be doing her part to help the migratory butterflies.

"It's a very small thing," she says. But, "it could end up being a big thing with a lot of people doing little things."