Accessibility links
Beekeepers Feel The Sting Of Stolen Hives : The Salt Beekeepers make money renting out hives to pollinate crops. But in California, thefts are on the rise. That's led to a hive shortage that is driving up demand, costs — and more thefts. 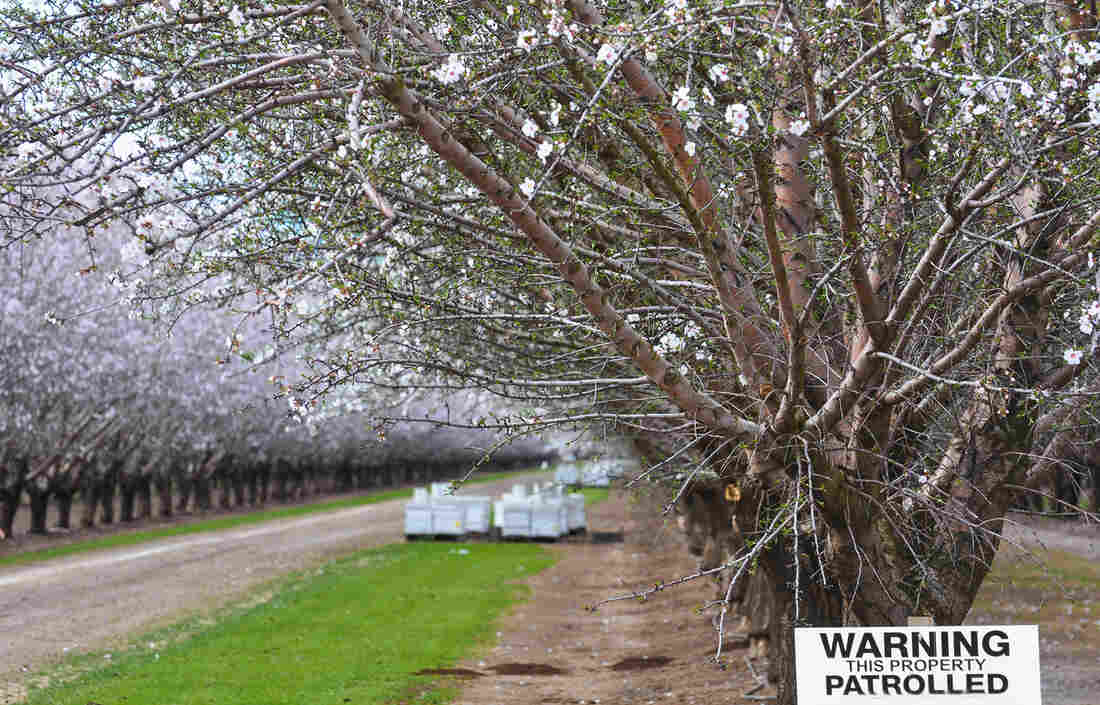 Between January and March, beekeepers send millions of hives to California to pollinate almond trees. A sign in this almond orchard warns it is patrolled — a measure to combat rising beehive thefts. Barbara Rich/Getty Images hide caption 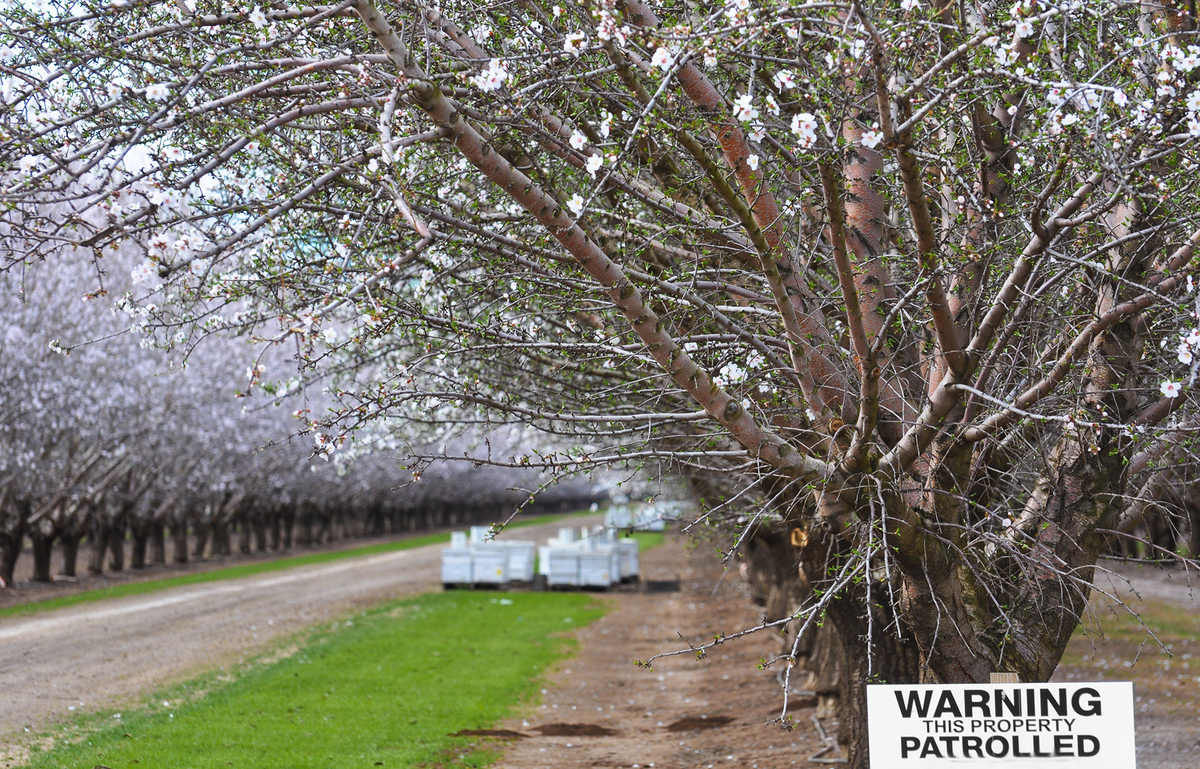 Between January and March, beekeepers send millions of hives to California to pollinate almond trees. A sign in this almond orchard warns it is patrolled — a measure to combat rising beehive thefts.

Between December and March, beekeepers send millions of hives to California to pollinate almond trees. Not all of the hives make it back home.

"The number of beehive thefts is increasing," explains Jay Freeman, a detective with the Butte County Sheriff's Office.

In California, 1,734 hives were stolen during peak almond pollination season in 2016. In Butte County alone, the number of stolen hives jumped from 200 in 2015 to 400 this year, according to Freeman.

Denise Qualls, a California bee broker who arranges contracts between beekeepers and almond growers, isn't surprised that beehive thefts are on the rise.

It takes more than 2 million beehives to pollinate California almonds. Currently, beekeepers are paid $200 per hive for pollination services (compared with $130 per hive in 2010).

To complicate matters, bee brokers who arrange contracts between beekeepers and almond growers are discovering that there are not enough beehives to go around, driving up demand, rental costs — and thefts.

Because of the expertise required to steal hives, the general consensus is that beekeepers are behind the heists.

"Beekeepers have the knowledge and equipment to go in and take the hives and the market to profit from them," Qualls says.

Thieves targeting hives to rent during pollination season are not making off with one or two hives. In Butte County, several large-scale hive thefts occurred this year, with reports ranging from 64 to 200 hives swiped at a time.

"Almond orchards are in rural areas with acres of trees, few homesteads and almost no surveillance," says Qualls, president and CEO of Pollination Connection. "It's hard to monitor the hives."

Most hives are unmarked, making it impossible to identify hives that might be stolen. Beekeepers who do brand each of their hives with the names and numbers of their apiaries often fall victim to creative thieves who remove the frames (the guts of the hive that are covered with bees and laden with honey) and put them in new, unmarked hive bodies.

"Thieves are going after easily accessible hives and unmarked hives," says Freeman. "Someone who knows how to handle them can move 200 hives in a matter of minutes."

Because stolen hives are hard to detect, it's difficult for law enforcement to catch and prosecute thieves and return hives to beekeepers. When thieves are caught, the penalties are harsh.

Last week, a beekeeper stood trial for the theft of 64 hives that he pilfered from Butte County and rented to an almond grower (through a bee broker) in a neighboring county. At the trial for the February crime, he was convicted of grand theft of an animal — a felony in California — and sentenced to 90 days in county jail and three years' probation.

Insurance policies are cost prohibitive, according to Freeman, and few beekeepers are reimbursed for their losses. To combat bee theft, some beekeepers are putting GPS units in their hives. And some growers are hiring guards to patrol almond orchards overnight.

"For the growers, this is their entire livelihood," Qualls says. "If someone steals their bees, it hurts their crops."

It's not just large-scale apiaries and California almond growers feeling the sting.

In April, 184 hives valued at CA$200,000 were stolen in Quebec. Three hives were pinched from the garden at a dental office in Greenville, S.C., in February. And thieves made off with two hives from a clover field in Des Moines, Iowa, in May.

The Iowa theft was caught on a surveillance camera. The thieves pulled up in a pickup truck and loaded up the hives. None of the beehives, which belonged to the Iowa Honey Co., were branded, according to its owner, Rob Taylor.

Taylor, a beekeeper and member of the U.S. House of Representatives, lost the honey and equipment and spent more than $500 on replacements.

"If someone steals the hives, they have no upfront costs," he says. "Any honey they pull off at the end of the season is pure profit; they are short-cutting the system."

The sheriff who took the report said he'd never heard of a beehive theft before. When news of the stolen hives hit the local media, three more Iowa beekeepers came forward with similar reports.

Taylor hopes the surveillance footage will help local law enforcement catch the thieves and recover the stolen hives. In the meantime, he's branded the 17 additional hives he maintains in locations throughout Des Moines and installed GPS tracking systems in each one in case his hives are targeted again.

"Who would have thought in the 21st century we'd have to worry about bee rustlers?" he ponders.