Accessibility links
A Neuroscientist Tackles 'Why Diets Make Us Fat' And Why Mindful Eating Can Help : The Salt Why don't traditional diets work for many people? Blame your brain, suggests Sandra Aamodt. Her new book delves into the science of why eating and weight have become such a sizable problem. 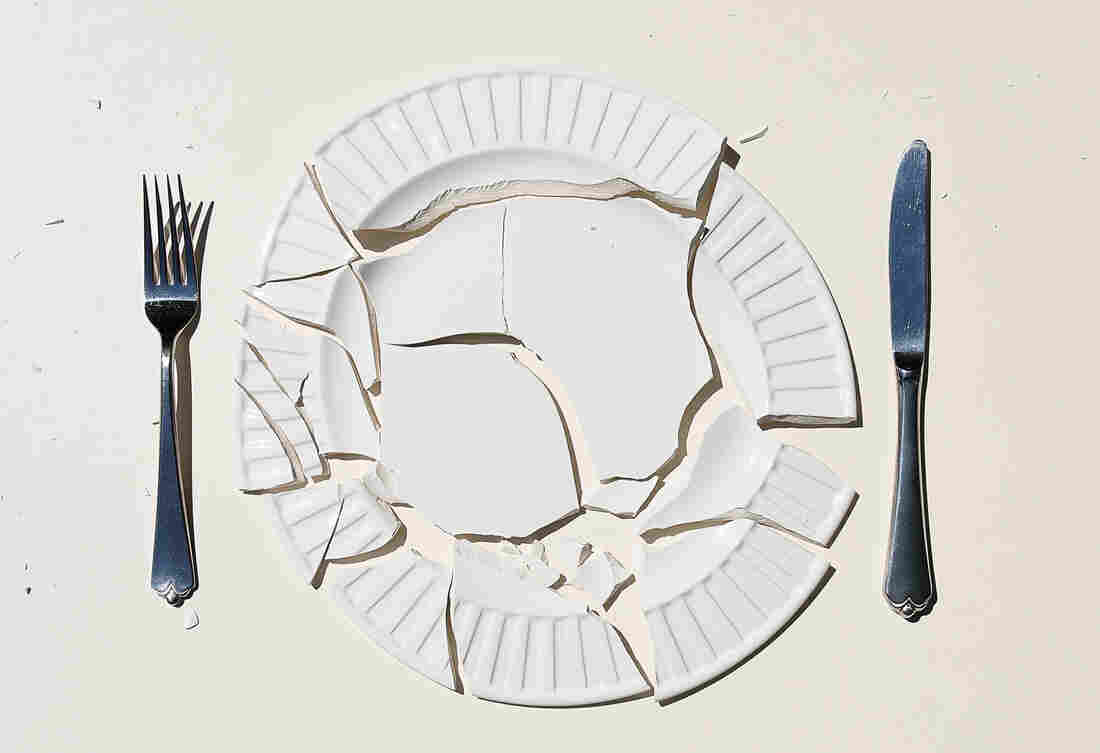 In her new book, neuroscientist Sandra Aamodt tackles why traditional diets don't work for many people, and often leave the dieter worse off than before. PM Images/Getty Images hide caption 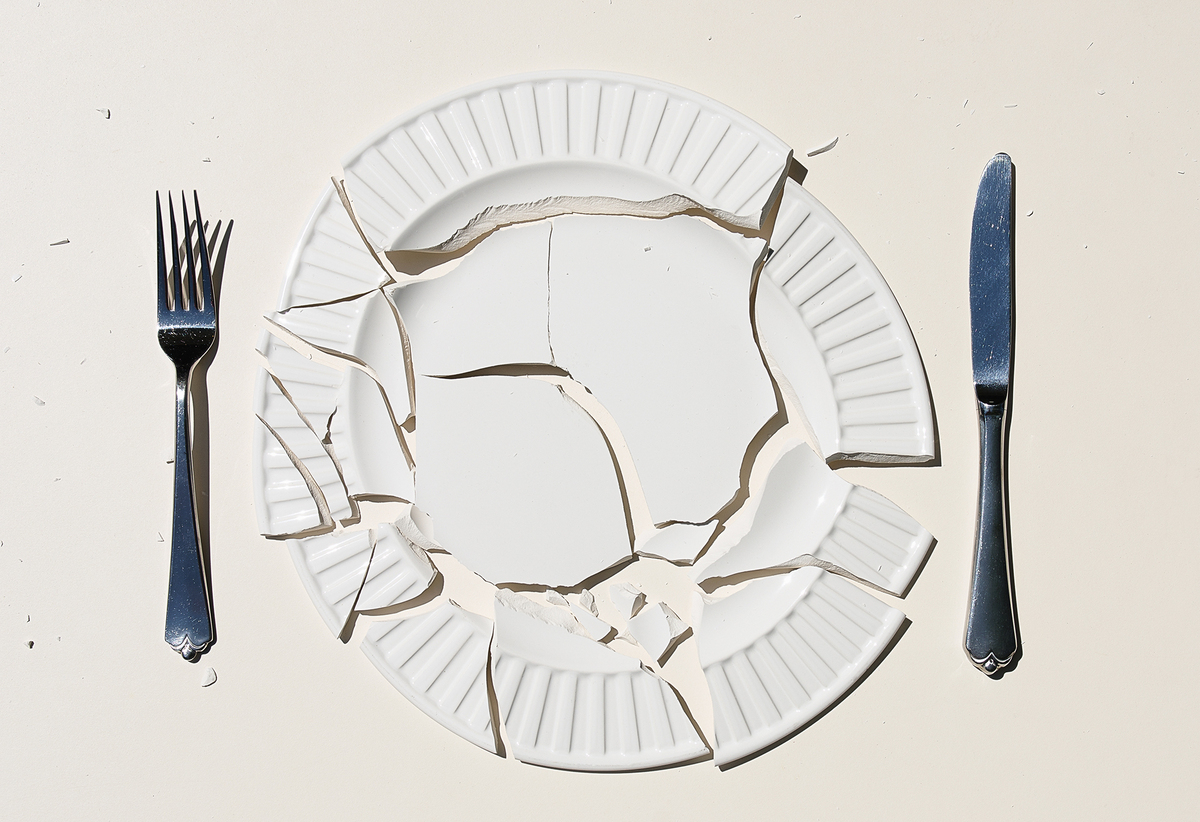 In her new book, neuroscientist Sandra Aamodt tackles why traditional diets don't work for many people, and often leave the dieter worse off than before.

When Sandra Aamodt talks about dieting, people listen ... or, they stick their fingers in their ears and go la, la, la. Aamodt's neuroscientific take on why diets backfire is that divisive.

Aamodt is a neuroscientist, book author and former editor of a leading brain research journal. She also has become a prominent evangelist of the message that traditional diets just don't work and often leave the dieter worse off than before. And she's an enthusiastic proponent of mindful eating.

"I define it as eating with attention and joy, without judgment," Aamodt said in an interview. "That includes attention to hunger and fullness, to the experience of eating and to its effects on our bodies."

Even if you've never heard of her, you likely will soon. Her new book, Why Diets Make Us Fat, is bound to change the weight-loss conversation, if not dismantle Biggest Loser-sized dreams. I am a therapist specializing in eating issues, and among my clients, Aamodt has already shifted the focus from weight loss to self-care. 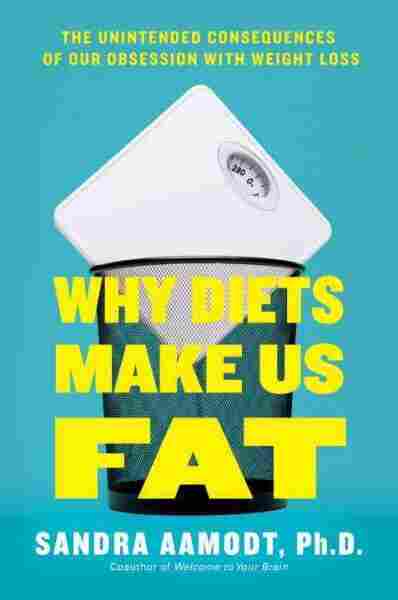 Why Diets Make Us Fat

The Unintended Consequences of Our Obsession With Weight Loss

Title
Why Diets Make Us Fat
Subtitle
The Unintended Consequences of Our Obsession With Weight Loss
Author
Sandra, Ph.D. Aamodt

Most clients are reluctant to accept her central argument: That our body weight tends to settle at "set points" — that 10- to 15-pound range the brain maintains despite repeated efforts to lower it. However, once they see how the set-point theory reflects their dieting experience, they realize that although they don't have the final say on their weight (their brain does), they do have real influence — through exercise and other health-affirming activities — over their health and well-being.

Of course, there are already dozens of titles out there that expound on the virtues of elevating eating to a meditative practice. No surprise, Aamodt covers much the same ground — but she writes far more on the scientific reasons why eating and weight have become such a sizable problem, and a lot less on specific strategies for rectifying it.

Before she was a neuroscientist, Aamodt was a young girl who just wanted to be thin. So, like many teenage girls who hate their bodies for falling short of cultural beauty ideals, she started cutting calories — and ended up trapped in a vicious cycle of yo-yo dieting bordering on disordered eating.

Fast-forward through three decades of starving and bingeing. Finally in 2010, she made a New Year's resolution to break the cycle.

"As I started to look into the research showing that almost all dieting is yo-yo dieting in practice, I realized that my story was typical, a result of my brain working as it should to protect me from starvation," she says.

So she adopted mindful eating, lost 10 pounds without dieting, and, in 2013, stepped onto the TED conference stage to share her story. More than 3.5 million viewers have since watched Aamodt's cautionary TED Talk.

According to Aamodt, set points vary from person to person, but generally go up much more easily than they come down. It's possible to diet down below the defended range, even for years, but it's nearly impossible to maintain a significant weight loss. That's because the brain is hard-wired for survival and never regards the lower weight as the new normal. It's set on pushing the weight back up as soon as possible.

To be sure, set-point theory is nothing new; it's been around since 1982. But Aamodt's neuroscientific view of set points has brought them back to the dinner table.

In her new book, Aamodt expands on her 12-minute TED Talk to make a more in-depth case for ditching diets, embracing mindful eating and other behaviors that effectively improve and extend our lives. The brain's weight-regulation system will maintain a stable, healthy weight for most people, she argues, if it's allowed to do its job without interference from dieting and other short-sighted slimming strategies. Her best recommendation: Stop focusing on weight and start concentrating on regular exercise, good food choices and stress reduction instead.

"Until I resolved to stop dieting," she writes, "I hadn't realized how much routine stress I was feeling during every meal, how badly the belief that I needed to be slender was damaging my self-image, or how much mental energy I was wasting on trying to control my eating. All in all, I consider leaving dieting behind to be one of the best decisions I've ever made."

While Aamodt stresses that mindful eating won't necessarily lead to weight loss, it will lead to a lot less wasted energy, she says. "Try mindful eating for the benefits you can count on, such as developing a good relationship with food."

That relationship starts early, which is why she hopes parents will be among the readers of her new book. "My strongest hope is that parents will read the book and realize that expressing anxiety about children's bodies is not going to make them thinner," she says. "Instead, it's likely to lead to weight gain and increase the risk of eating disorders."

Learning to eat mindfully can be tricky for lifelong dieters. "Early on," she says, "I had trouble figuring out whether I was hungry. ... I also had trouble detecting fullness before I'd overeaten." She says it took her about six months to get the hang of it. And, as she tuned in to her body, she discovered something surprising about her own tastes.

"I discovered that I didn't like some of the foods I'd been using to cheat on my diet, like doughnuts or Doritos," she says. "But I still love other treats, like ice cream and strawberry shortcake."

Jean Fain is a Harvard Medical School-affiliated psychotherapist and author of The Self-Compassion Diet.