Accessibility links
Copycake: When Food Art Ideas Get Swiped : The Salt Caitlin Freeman made a name for herself selling modern art-inspired pastries at the SFMOMA. The museum's cafe just reopened with a new caterer — whose desserts look suspiciously familiar. 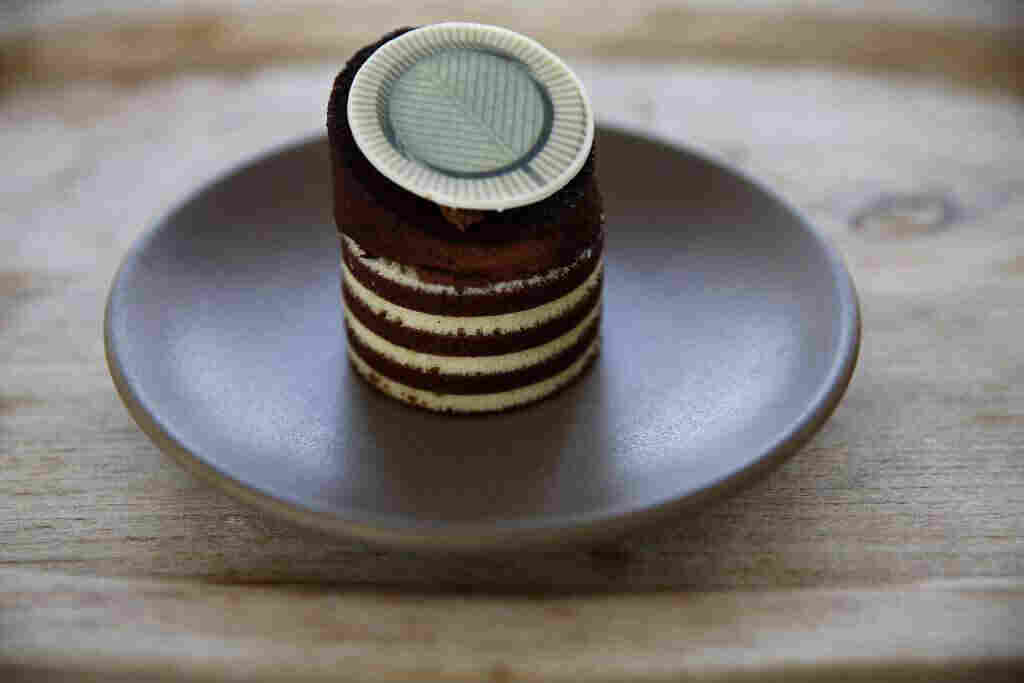 The Oculus cake now being sold by the new caterer running the SFMOMA's upstairs cafe. The cake was inspired by the distinctive tower at the San Francisco Museum of Modern Art. It is similar in design and spirit to a cake prepared by Caitlin Freeman and her baking team for a museum event several years ago. (See below.) Connor Radnovich/ Courtesy of The San Francisco Chronicle hide caption 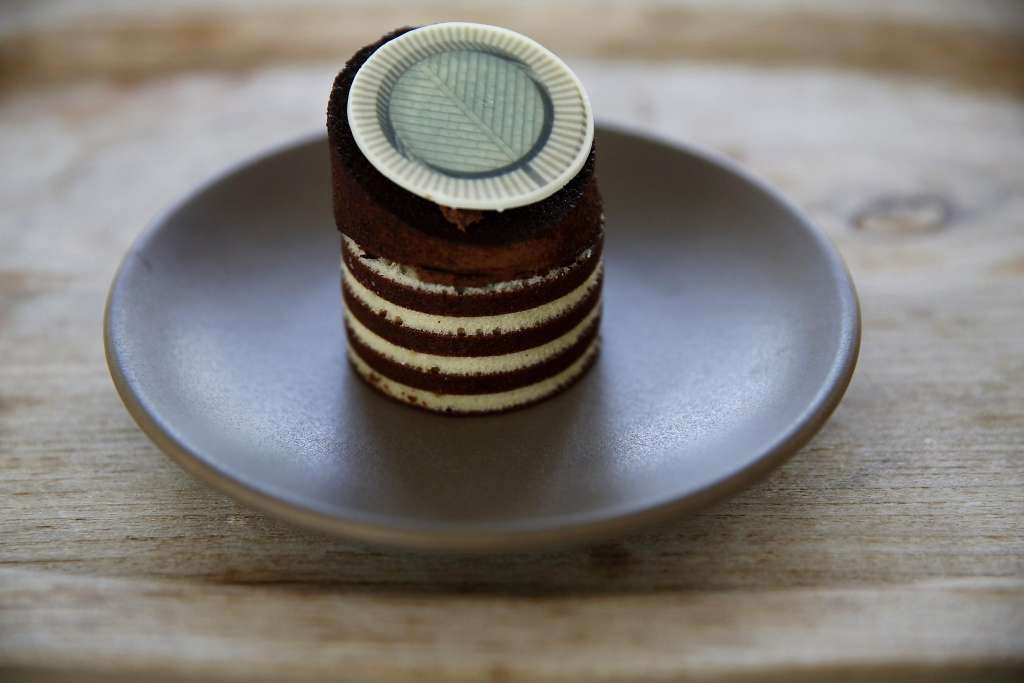 The Oculus cake now being sold by the new caterer running the SFMOMA's upstairs cafe. The cake was inspired by the distinctive tower at the San Francisco Museum of Modern Art. It is similar in design and spirit to a cake prepared by Caitlin Freeman and her baking team for a museum event several years ago. (See below.)

Where do you draw the line between inspiration and straight-up imitation when it comes to food?

A few years ago, we brought you the story of Caitlin Freeman, a pastry chef baking innovative, art-inspired cakes at the San Francisco Museum of Modern Art. Using modern art as her muse, Freeman translated what she saw in the museum into edible form at the SFMOMA's upstairs café. 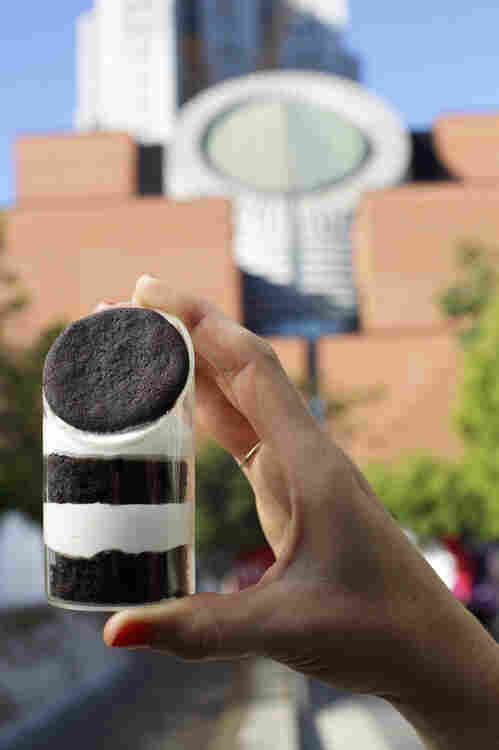 Her creations eventually filled a cookbook, Modern Art Desserts, and her most well-known dish, a cake composed of small, primary-colored blocks delicately cemented together with chocolate icing, graced its cover. Inspired by the geometric art of Piet Mondrian, it brought both Freeman and the café fame – and inspired many a home cook to tackle this masterpiece at home.

The museum closed for renovations in 2013. When it re-opened last month, the upstairs café was under new management, with a new baking team – but the art-themed desserts for sale looked suspiciously familiar to Freeman. Call it a case of copycake.

Blue Bottle, the coffeehouse chain own by Freeman's husband, James Freeman, used to run the SFMOMA's upstairs café, but it failed to win its bid to return after the renovations. Freeman was disappointed, but, as a lifelong art lover, she nonetheless felt compelled to take her infant daughter to check out the refurbished museum. She even stopped for a few moments to take in the scene at the new café, now run by a catering company that had previously operated the museum's downstairs café.

That's when three "art-inspired" desserts the café was serving caught her eye.

"I saw the Ellsworth Kelly cake, and I was like, wait a second," she tells NPR. That cake, according to the menu, is inspired by Kelly's painting Gaza, and features cream mousses and sponge cake. Another, called Andy Warhol's Triple Elvis, is peanut butter cream, honey and banana cake. Finally, the Oculus, a sculptural nod to the museum's architectural turret, is cream-filled sponge cake with chocolate mousse and a white chocolate disc. That dish is strikingly similar in both spirit and design to a dessert that Freeman and her team created several years ago for a museum event.

"It stings because I felt like I was doing something for beauty and for love," she says. "I'm just so bummed that the SFMOMA didn't want me and my future inspiration back."

Freeman's path to baking actually traces right back the museum. It's where, as an art student, she discovered Display Cakes, Wayne Thiebaud's 1963 painting of frosted confections, which inspired her to pursue a career as a pastry chef. The stable of modern art desserts (and some savory items) that she and her small team made at the SFMOMA evolved organically after Blue Bottle began operating the café in 2009.

"This was entirely new to me," she says. "I had never heard of somebody making art desserts. I wasn't like, 'Here's a chance to do that thing I heard about.' It just came because I was where I first found my Wayne Thiebold cake, and that inspired me to be a baker."

But the museum says art as a muse for food is not a concept that belongs to Freeman. Neither the SFMOMA nor the new caterer responded to interview requests, but, in a statement, the museum said:

"SFMOMA is highly respectful of the expression of our partners and their desire to draw inspiration from the museum's architecture and art collection to create new work across all media, including food. Our art-inspired desserts continue a long tradition of art-inspired food served at SFMOMA and at museums and cultural institutions all over the world. We were pleased that Caitlin Freeman was a part of that legacy and are very grateful and respectful of her contributions."

In the art world as in the food world, creators are constantly finding inspiration in — and riffing off — each other's work. But food is a difficult medium to copyright, so some chefs give credit on the menu if a dish was inspired by another chef.

"Recipes are not copyrightable, nor are methods of cooking, and ideas are never copyrightable. So the idea of making desserts inspired by artworks could not be copyrighted," says intellectual property attorney Naomi Beckman-Straus with the firm Mitchell Silberberg & Knupp in Los Angeles.

"However, there is no clear reason why the visual appearance of a dish could not be copyrighted," she says. "Because our legal system works on precedent, a lot of it is just that it's generally accepted that there's no copyright protection for restaurant dishes or food."

Copyright does not extend to useful articles – the basic, functional objects that people need. Like food, clothing and furniture are also not protected by copyright.

But what if, say, the piece of furniture has an artistic element? In a landmark case in 1954, the Supreme Court decided that sculptural, artistic bases on lamps were "conceptually separate" from the lamp, and therefore were eligible for copyright protection.

"In theory, that could be done with food, although it hasn't really been," Beckman-Straus says.

She notes that a case currently before the Supreme Court could potentially pave the way for more people to try to fight for food copyright. The high court has agreed to hear a case involving whether the designs on cheerleading uniforms can be copyrightable.

"It will hopefully [bring] some clarity on when you can separate the artistic expression part from the usefulness," Beckman-Straus says. "If the ruling makes it clearer how you can prove that the visual appearance of something is different from its useful aspects, then it could open the door to more claims based on food."

In trademark law, a business can protect the overall look and feel of a product if it serves to distinguish the brand. It's called "trade dress" and she argues that it could be applied to plating and the way food looks. (She wrote about trade dress and cuisine in the UCLA Law Review.)

"If there's a very specific style a chef uses, or a dish that they use to signify 'This is my restaurant,' then in theory, you could try to use trade dress to get that protection," Beckman-Straus says.

As for Freeman, she says she doesn't plan to pursue legal action. But future visits to the SFMOMA, and its café, will surely be bittersweet.