Accessibility links
'Moon Of The Faith:' A History Of The Apricot And Its Many Pleasures : The Salt The Romans dubbed it the "precious one." Poets praised its beauty. The conquering Arabs took it to the Mideast, where the luxurious fruit was exploited in sugary confections. 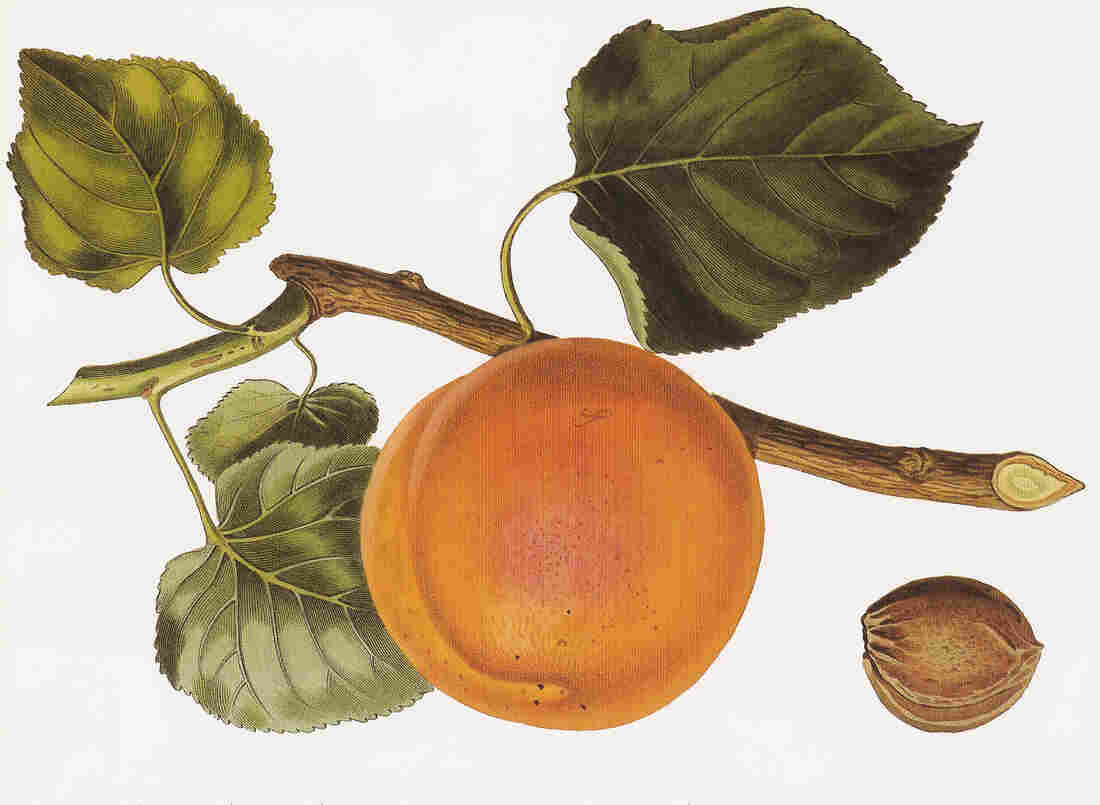 The 'Turkey' apricot, a hand-colored engraving after a drawing by Augusta Innes Withers (1792-1869), from the first volume of John Lindley's Pomological Magazine (1827-1828). The Romans dubbed the apricot the "precious one." Poets praised its beauty. The conquering Arabs took it to the Mideast, where the luxurious fruit was exploited in sugary confections. The Royal Horticultural Society Diary/Wikimedia Commons hide caption 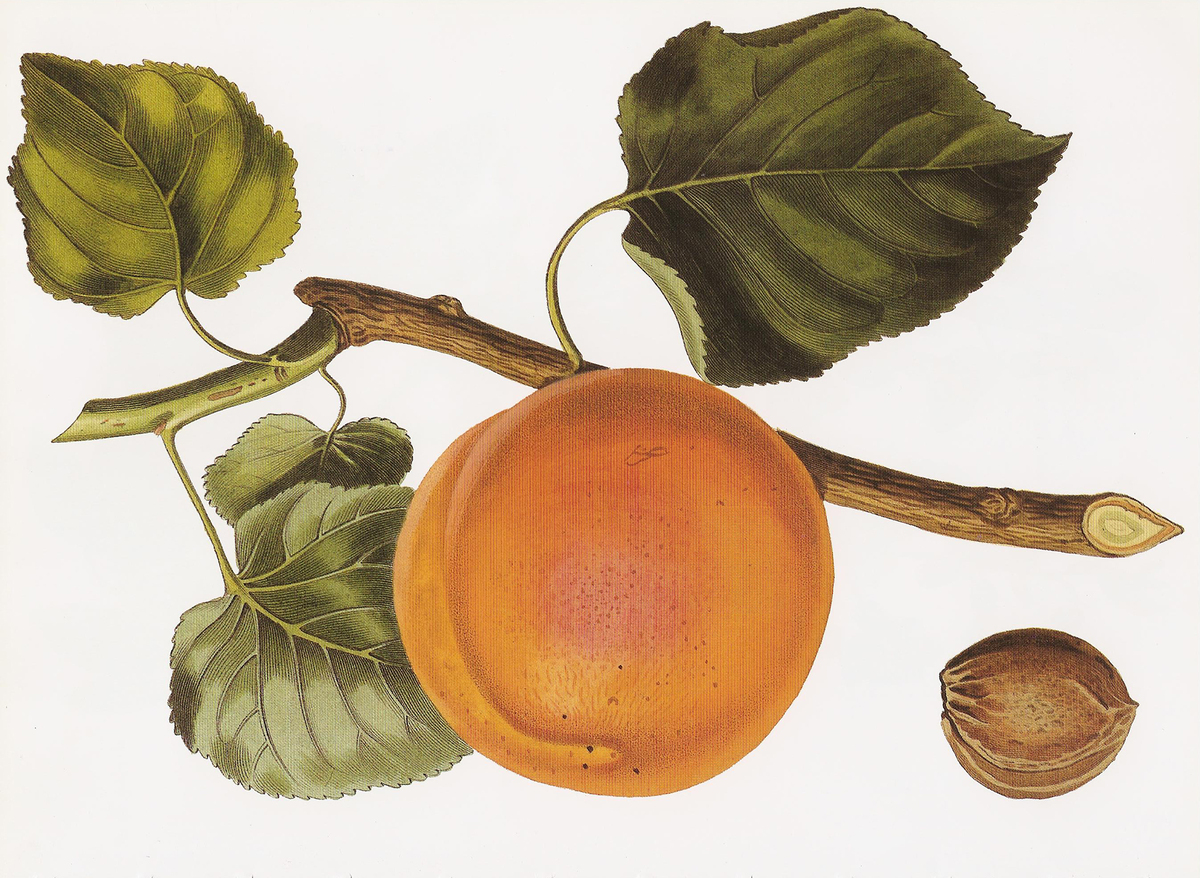 The 'Turkey' apricot, a hand-colored engraving after a drawing by Augusta Innes Withers (1792-1869), from the first volume of John Lindley's Pomological Magazine (1827-1828). The Romans dubbed the apricot the "precious one." Poets praised its beauty. The conquering Arabs took it to the Mideast, where the luxurious fruit was exploited in sugary confections.

Editor's note: The following is an excerpt from the book The Carrot Purple And Other Curious Stories Of The Food We Eat.

Four radiant, yellowish-orange apricots were depicted on each of the cellophane packages stacked on a shelf in a Middle Eastern grocery near my home. An avid fan of dried apricots, I was drawn to the sheets of dried apricot paste imported from Damascus. Amardine, as it is called, is especially beloved in the Ramadan season, when it is used to make a juice that the faithful drink to break their fast or to savor during the festive time after sundown.

Translated into poetic Arabic, amardine means "moon of the faith." It is unlike your ordinary supermarket fruit roll that some call "shoe leather." According to Charlie Sahadi, owner of a vast Middle Eastern food emporium in Brooklyn, the Arabic delicacy has a "thickness" and "consistency" that ordinary fruit rolls lack.

The apricot, which was cultivated in China and Central Asia as early as 2000 B.C., migrated with the country's traders, who traveled the Great Silk Road. The Chinese merchants, botanist Berthold Laufer suggests, very probably introduced the fruit to the Persians. They called it the "yellow plum" (zardaloo). Widely dispersed, it was spread throughout the Eurasian steppe by nomadic, horseback-riding tribesmen. 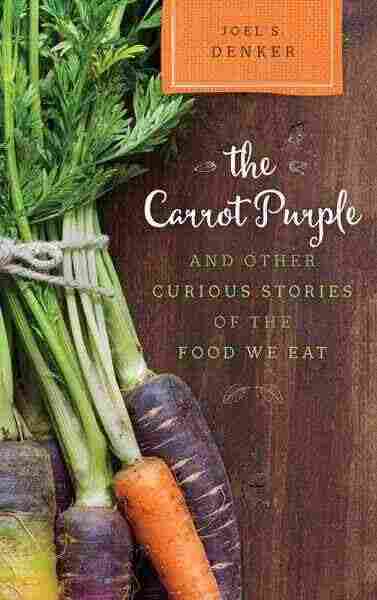 Title
The Carrot Purple and Other Curious Stories of the Food We Eat
Author
Joel S. Denker

This member of the rose family, whose relatives include the plum, peach, cherry and almond, is known botanically as Prunus armeniaca, a reference to the land from which the ancient Greeks believed it came. The Romans, who learned of the apricot in the first century A.D., dubbed it praecocum, the "precocious one." They noticed that the fruit bloomed early in the summer. A sensitive plant, it was easily injured by early frost or strong winds. The fragile fruit has long been a favorite of royals and aristocrats. The apricot's beauty captivated poets like English writer John Ruskin, who described it "shining in a sweet brightness of golden velvet."

The conquering Arabs took the luxurious fruit from Central Asia to the Middle East. The caliphs, who ruled the vast Islamic empire stretching from the Gulf to Sicily between A.D. 750 and 1258, imported apricots from Tus in northeastern Persia to their capital in Baghdad. The chefs of the court created dishes for the al-barqouq ("apricot" in Arabic), which were adopted in the many Islamic dominions.

From the Persians, the Arabs had picked up the technique of adding tangy fruit, such as apricots and cherries, to liven up their meat dishes. One of the cookbooks of the empire called for apricots in a delicacy called mishmishiya (lamb and apricot stew): "Take fat meat. Boil it in a little water. ... Take dried apricots and remove their pits and replace them with blanched almonds. And when the meat is done, throw the apricots on it, and raisins ... a stick of Chinese cinnamon, mint, mastic, saffron and jujubes, and sweeten it with sugar and honey." Middle Eastern cooks grasped the "special affinity," culinary historian Claudia Roden points out, "between lamb and apricots."

Passionate about sweets, the Arabs exploited the apricot for their sugary confections. A medieval syrup that blended its juice with sweet almonds was a forerunner of the apricot drinks later hawked in the Middle East by vendors or sold in cafés. The apricot also fit neatly into the repertoire of Arabic desserts. Stuffed with almonds or almond paste, the fruit complemented its nutty relative. Topped with chopped pistachios or almonds, one rich treat of pureed apricots and whipped cream was perfumed with either rose or orange blossom water.

Apricots flourished throughout the Islamic dominions. The Moors, who conquered Spain, planted apricots in [Granada]. Syria was another bastion of the fruit. In the garden oasis outside Damascus, the 19th century English naturalist Canon Henry Baker Tristram wrote, "The great apricot-trees were laden and bent down under strings of ripe, golden fruit. The lanes were strewn with apricots. Asses, mules, and camels in long strings carried heaped panniers of these 'golden apples.' "

To conserve the splendid produce throughout the year, the Syrians convert it to amardine. According to Middle Eastern food expert Sonia Uvezian, peasant women traditionally crushed apricots with their feet in stone troughs. They then extracted the pits and spread out the paste in the sun to dry. 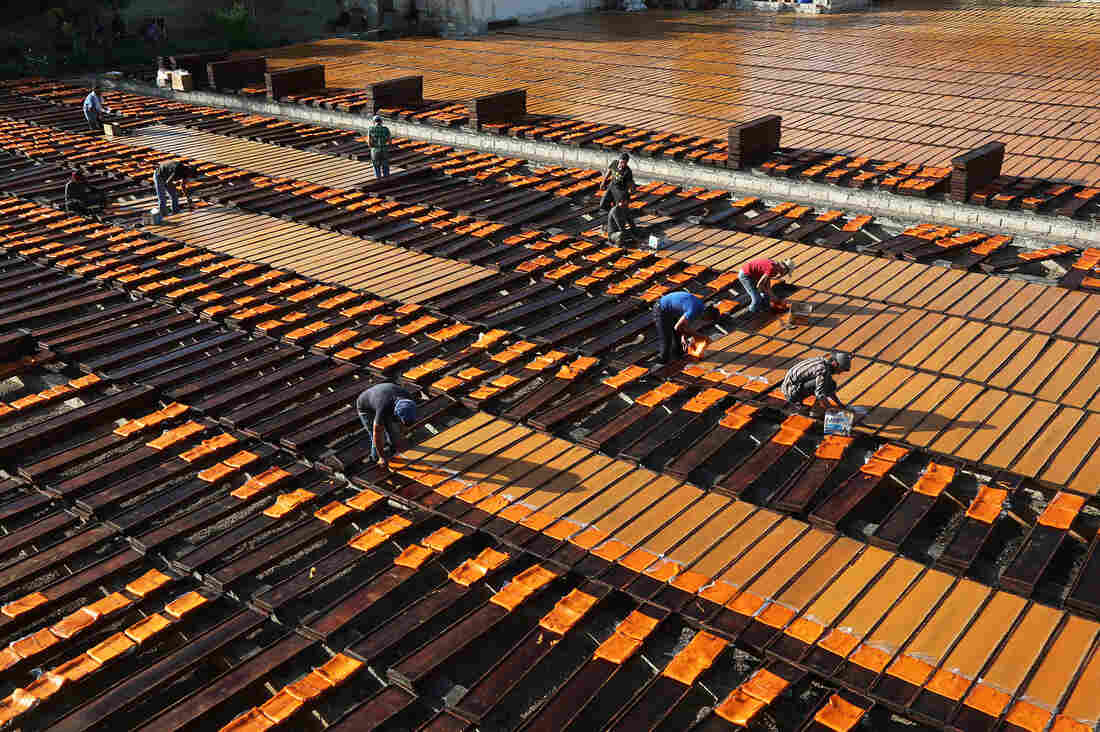 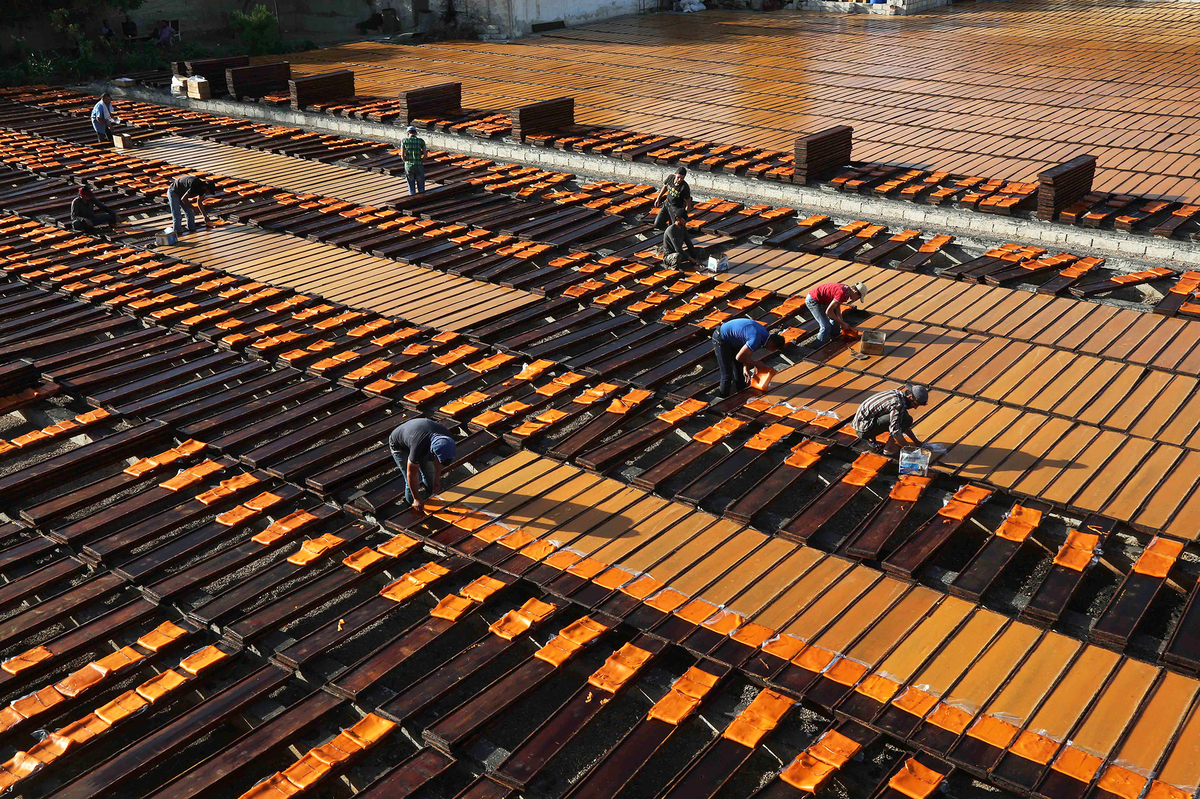 Workers prepare traditional sun-dried apricot paste during the holy month of Ramadan in the rebel-held town of Arbin, Syria.

Mohamed el-Shalati, whose Damascus company makes a popular brand of amardine, is one of many manufacturers who process and market the paste today. The "rotund, mustachioed, and avuncular" el-Shalati, as writer Ken Gould describes him, has sometimes gone to dangerous lengths to snare the fruit. He and his son, Ahmed, have traveled to Mataya, the apricot capital of Turkey, near the Syrian border, in search of their prize.

"Between avoiding Turkish army checkpoints and local brigands levying tolls on mountain passes, Mohamed and Ahmed have to cope with heat of more than 40 degrees C and narrow roads," Gould recounts. In el-Shalati's Damascus factory, the apricots are reduced to a pulp in copper pots and then put through huge sieves. Steady heating and stirring finally yields a paste that is dried under nets on the factory roof for 48 hours.

Most of us do not get to experience the glories of a succulent, ripe apricot. Instead, we make do with dried or canned fruit. We are deprived of this joy because modern shipping and marketing practices demand that the fruit be picked before it fully ripens on the tree. "I get docked for ripe fruit," grower George Bonacich tells fruit expert David Karp. As a result, shoppers are confronted with a pallid apricot. "Those harvested early to make them easier to transport are often a woolly, watery disappointment," English food writer Hugh Fearnley-Whittingstall observes.

A few farmers have attempted to break the mold and develop a fruit closer to the apricot's Eastern ancestors. John Driver, a Northern California agriculturist, has hunted for Central Asian varieties where the old Silk Road kingdoms were located. In this "hub of diversity," the home to the widest spectrum of the fruit, Driver found sweet, intensely flavored apricots in many shapes and colors: "There really is a tremendous amount of different apricots out there," he told Adam Gollner, a Canadian food writer. "Unlike Western apricots—invariably tawny or orange-yellow, occasionally flecked with reds—Eastern ones range in color from purple-black to cream-colored with a rosy blush. They can be small as a pea or as big as a tennis ball, as sweet as honey or [as] acrid as cat pee on burnt toast."

Driver took the seeds back to his Northern California farm and soon was growing several varieties. Because Eastern apricots usually required colder winters than California's, his achievement was all the more stunning. Driver marketed his apricots as "CandyCot Apricots: The Sweetest Thing on Earth," twice as sweet as the typical fruit. Contrary to industry convention, he shipped his products fully ripe. His apricots traveled in foam-padded boxes to prevent bruising. "Maybe I'm crazy, but I think the industry needs to reexamine how they're selling fruit," he told writer Karp. "If I were a consumer, this is what I'd want."

While we wait for a more ideal apricot, we can still appreciate the yearlong pleasures of amardine. I remember waiting expectantly while the sheet of apricot steeped in a bowl of cold water in my apartment. The liquid gradually took on a bright orange hue. I waited expectantly. Sipping the thick, rough-hewn drink, with its intense apricoty flavor, I felt a strong kinship with the English writer Edward Bunyard, who wrote a rapturous ode to the fruit: "... In some Persian Palace whose quiet garden hears only the tinkle of a fountain, it would seem to find its right setting."

Excerpt adapted from The Carrot Purple and Other Curious Stories of the Food We Eat (2015) by Joel S. Denker, with permission of the publisher, Rowman & Littlefield. All rights reserved. No part of this excerpt may be reproduced or printed without permission in writing from the publisher.

Although this book says the Moors planted apricots in Grenada, as in a previous version of the excerpt, it was actually Granada.