Accessibility links
Can The Soda Industry's $4 Million Ad Blitz Fend Off A Sugary Drink Tax? : The Salt Philadelphia's City Council on Thursday will vote on a 1.5 cents-per-ounce tax on sugary beverages, as well as on diet sodas. Big Soda is spending big bucks on ads to sway public opinion against it. 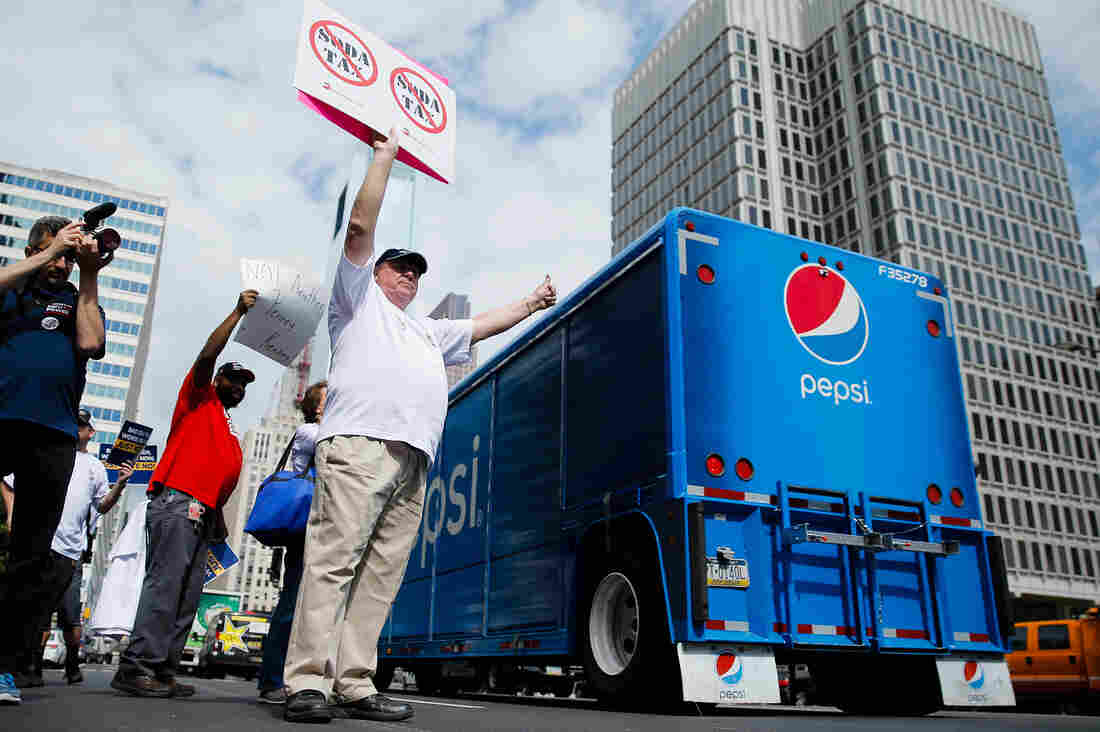 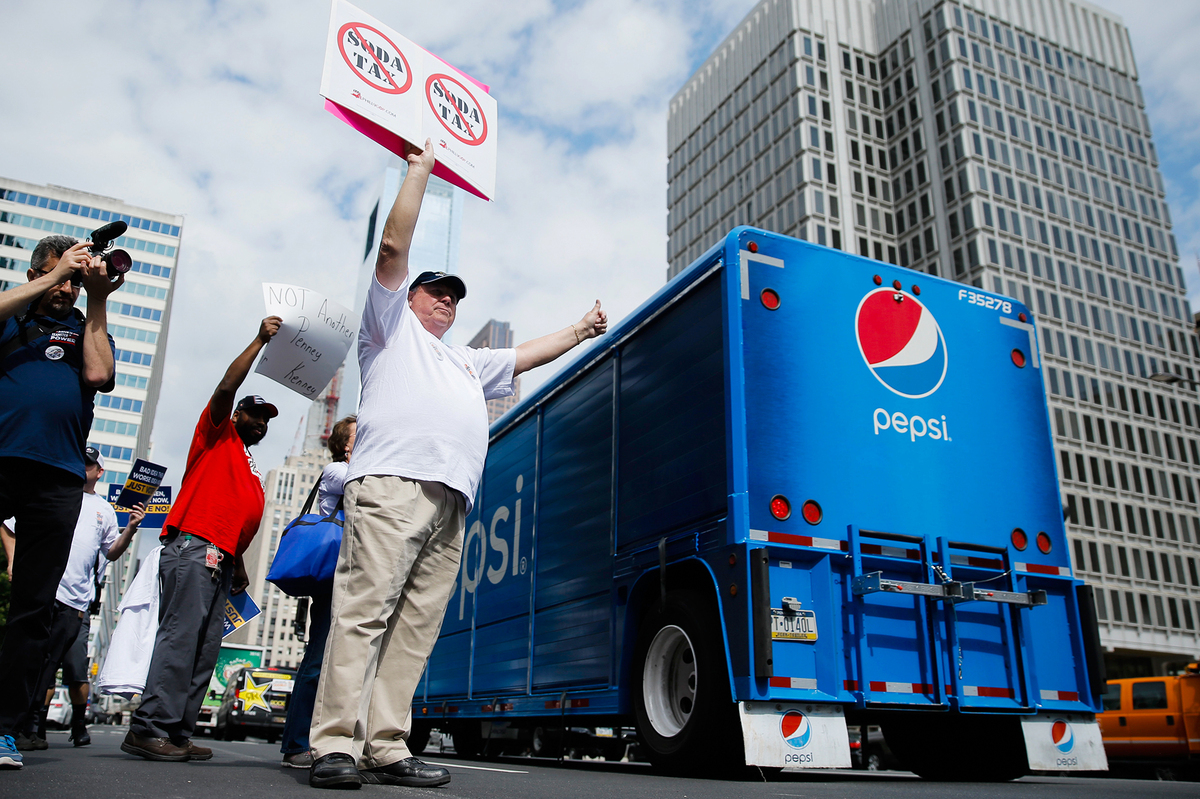 When the mayor of Philadelphia first proposed a 3 cents-per-ounce tax on sugary drinks, the American Beverage Association was quick to finance a campaign railing against it.

Since March, records show that the industry has financed more than $4.2 million in media buys in Philadelphia to air ads aimed at turning public opinion against the proposal.

"This tax could mean higher prices on hundreds of grocery items with some sugar, like soft drinks, sports drinks, juice drinks, energy drinks and teas," intones the narrator in one ad. "Many products could double in price," the narrator says. "Take action: Contact your city council member today."

The group No Philly Grocery Tax, which is funded by the American Beverage Industry, has also gathered testimonials from local grocery operators and small-business owners who oppose the tax.

If implemented, "the bottom line, it's going to hurt. It would definitely have an effect on my revenue — I would have to increase the price," local business owner Wayne Green says in one of the video testimonials.

So far, these ads have not dissuaded the City Council from moving forward. Last week, members took a step toward approving a modified version of the mayor's proposal. What's on the table now — and up for a final vote Thursday — is a tax of 1.5 cents per ounce that would also include diet drinks and other artificially sweetened beverages.

One of the mayor's selling points in persuading the City Council to support the measure is that much of the estimated $91 million the tax would bring to the city's coffers each year would boost funding for programs including citywide pre-K education.

So, who's helping to get the mayor's message out? A well-funded group called Philadelphians For A Fair Future has spent about $1.3 million in media buys to counter the soda industry's messages. One spot features a Philadelphia pastor, James Hall, who frames the issue as a matter of right and wrong.

"We are the poorest big city in America," Hall says, while looking into the camera. "The soda companies profit by targeting the poorest communities. Now, they're being asked to give a little back. ... It's the right thing to do."

Philadelphians For A Fair Future has financial backing from philanthropists including John and Laura Arnold, who have contributed $400,000 to the effort. (Note: It's their personal gift, not from their foundation.) In a statement, John Arnold told us why he's supporting the effort.

"There is no question as to the adverse health effects of the high amounts of sugar in soda and sports drinks. Growing scientific evidence shows that an excess of sugar can overload critical organs over time, leading to serious diseases including heart disease, liver disease, and diabetes," Arnold wrote.

"A yes vote by the city council will allow the city to begin battling the harmful effects of sugar," Arnold concludes.

Another major supporter is Michael Bloomberg, who took on big-sodas when he was mayor of New York City. As we've reported, Bloomberg also supported the campaign to tax sugary beverages in Berkeley, Calif. After it passed, Bloomberg adviser Howard Wolfson called the tax a huge defeat for Big Soda and a big victory for public health. "The results will surely encourage other municipalities across the nation to pursue similar initiatives to fight obesity and diabetes," Wolfson told us back in 2014.

For clues as to how a tax would affect sales of sugary drinks, we can look to Mexico. After the country passed a tax on sugary drinks in 2014, sales dipped, according to an analysis published in The BMJ. Researchers predict this would likely happen in Philadelphia, too.

"The evidence is clear that when prices go up, people buy less of things, "says Michael Long of George Washington University. He and colleagues at the Harvard School of Public Health published a 10-year estimate of the health impacts of a 1-cent-per-ounce tax on sugary drinks in Philadelphia.

The industry-funded opposition group, No Philly Grocery Tax, says the tax would be unfair — and that a growing number of residents in Philadelphia oppose it. "If this was a referendum, we'd win it," Larry Ceisler, a spokesperson for the group, told us.

He pointed to new polling data that shows 58 percent of respondents do not support the tax on sweetened beverages, though, as we've reported, other polls point to wider support for the measure.

I asked Ceisler if the $4 million in opposition ads have gotten the group what it wants. "We've spent a significant amount of money, but you have to," Ceisler says. "And that's [how] we turned public opinion."