Accessibility links
'Locally Laid': A Humorous Memoir To Cure You Of Farming Fantasies : The Salt When Jason Amundsen told his wife he was quitting his job to raise pasture-raised eggs, she was less than amused. Readers, however, will chuckle at the story of their tragicomic path to success.

'Locally Laid': A Humorous Memoir To Cure You Of Farming Fantasies

'Locally Laid': A Humorous Memoir To Cure You Of Farming Fantasies 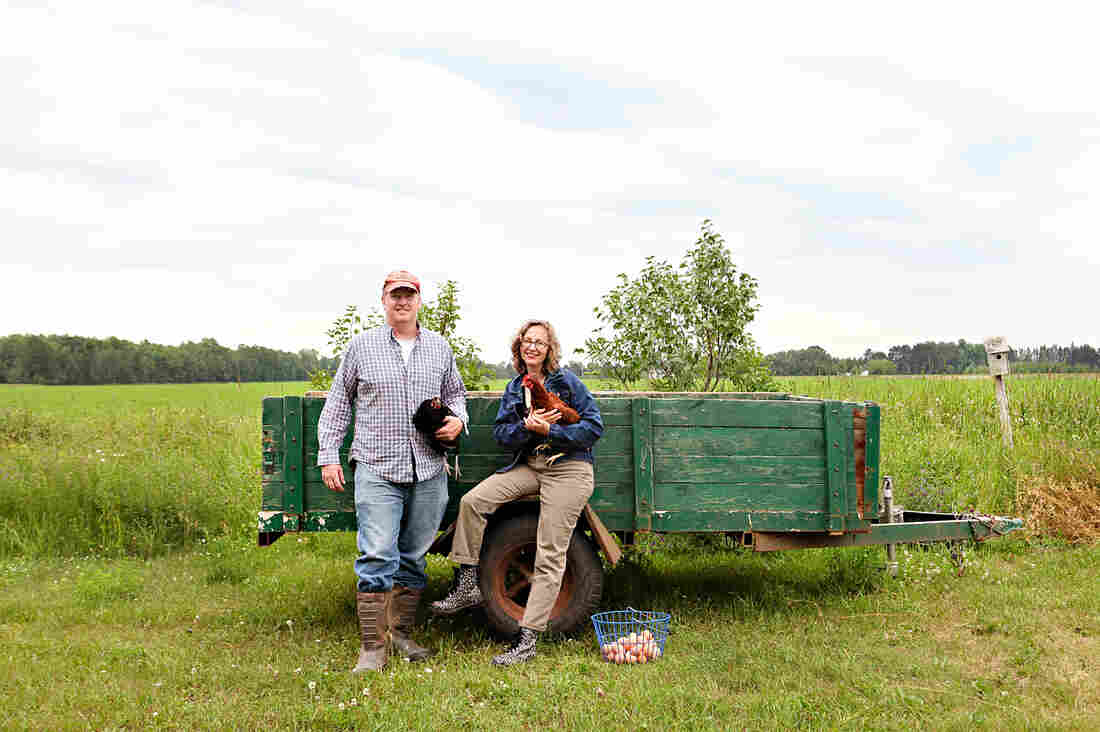 Jason and Lucie Amundsen on their farm in in Wrenshall, Minn. Katie Cannon hide caption 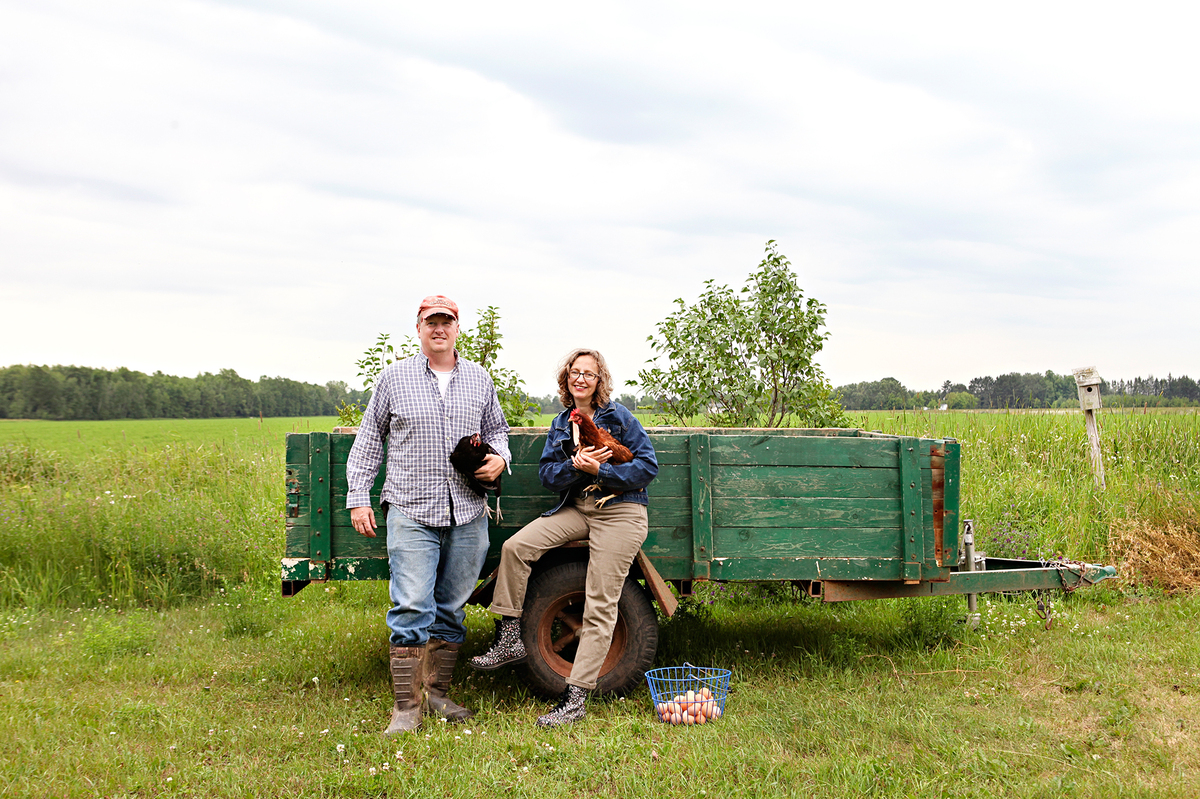 Jason and Lucie Amundsen on their farm in in Wrenshall, Minn.

If one has to sell a crazy idea, why not over beer and salsa? That's exactly what Jason Amundsen did four years ago at a Mexican restaurant in Duluth, Minn., when he announced to his wife, Lucie, that he wanted to give up his job and sell eggs.

At the time, Jason was a grant writer for a local hospital; Lucie was a freelance journalist. They had two school-age children to raise and a mortgage to pay. What they knew about chickens could fit in an eggcup with room to spare.

But here was Jason, going into raptures over eggs. 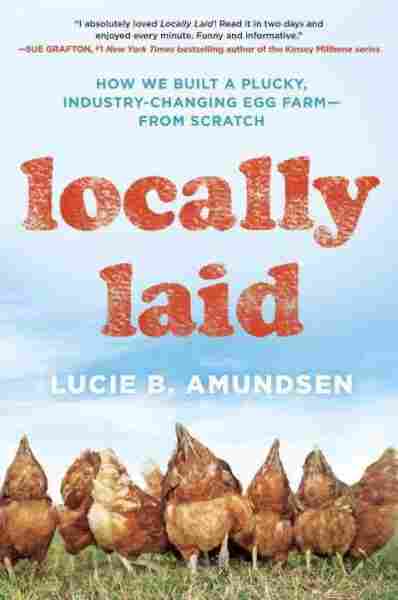 How We Built a Plucky, Industry-Changing Egg Farm—From Scratch

by Lucie B. Amundsen

Not any old battery-caged supermarket egg, but "pasture-raised eggs," he explained to his staggered wife, who gulped her beer down rapidly. These eggs are far superior to "free-range eggs," he told her. (Not to mention cage-free eggs, which are typically big operations where hens are kept indoors — just not in cages.) For while free-range hens do forage freely under the sun, they are grazed on the same old plot of grass — even after it's been pecked dry of all its nutrients. Whereas, beamed Jason, pasture-raised hens are rotated on fresh plots wriggling with worms and vitamins. Consequently, he argued, they lay tastier and healthier eggs — which he intended to sell.

Many, many tragicomic months later, Lucie would coin a phrase to describe pasture-raised chickens. She'd call them "salad-eating poultry athletes." But that was in the distant future. At that moment, she simply lost her temper.

"Start a farm?" she thought furiously. "This is a man who until a few years ago could not identify a pear."

But start a farm Jason did, and Lucie went along on the ride. The transition, she writes in Locally Laid, her memoir about their grand experiment, was "as subtle as an axe."

The book gets its title from the mischievously risqué brand name — the Locally Laid Egg Co. — the Amundsens chose for their farm. The sexual pun did ruffle the sense of propriety of a few Midwesterners — one irate complainant accused them of adding to the "crudeness in the world" — but on the whole it proved to be a masterstroke. It got the fledgling poultry farm the smiles, winks, attention and social media boost it so desperately needed.

"Our sassy name broke through the media clutter out there," says Lucie, whose car is emblazoned with the exhortation "Get Locally Laid." "No one would have given us a second look if we'd called ourselves Amundsen Farms," she says.

But to return to the beginning: After leasing a plot of farmland in Wrenshall, Minn., outside Duluth, the Amundsen family waited in high excitement for the first pullets to arrive. It turned out to be a baptism by dehydration. The hens were delivered on a boiling June day in 2012, when the annual Grandma's Marathon had slowed traffic in the town to a crawl. Squashed into crates that had been loaded on an open trailer, the birds were a parched, traumatized, pecked and broken mess, having indulged in an orgy of "bird-on-bird violence" on their long and hot journey. Of the 900 hens, 125 died. 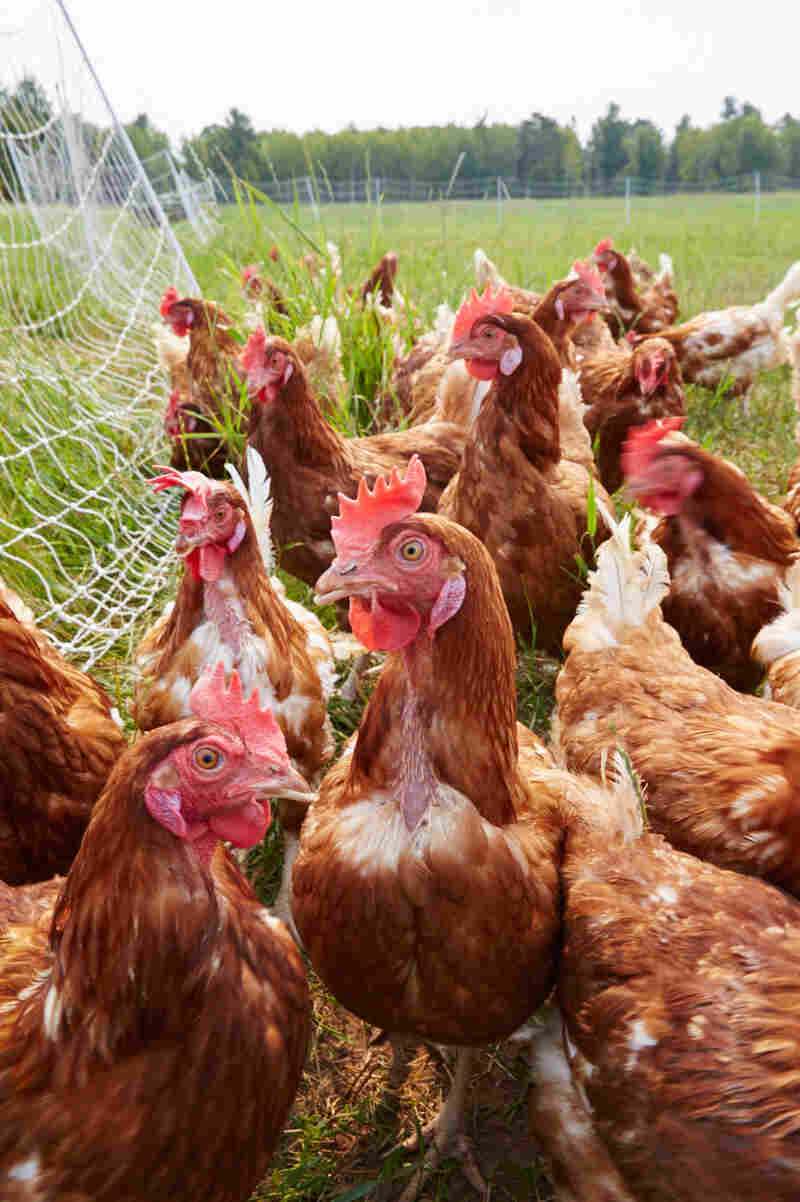 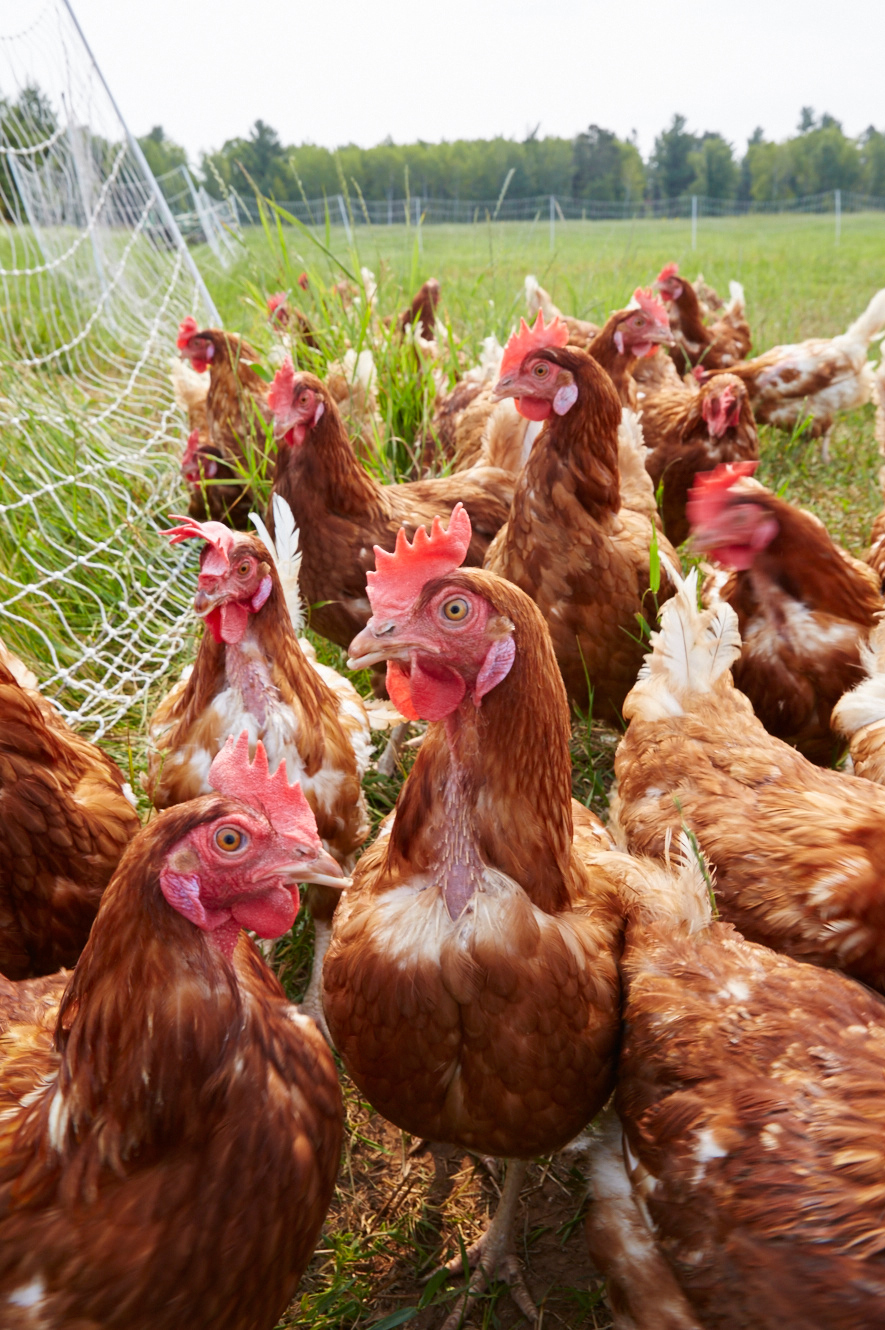 The next shock was discovering that these warehouse-bred hens didn't behave like regular hens. Never having seen the sun, they didn't know what it was to forage or come home to roost. So, at sundown, the Amundsen family had to chase after each hen, capture it and bring it into the barn.

And that was only a tiny bit of the battle won.

In the barn, the birds fell asleep on the overcrowded floor, ignoring the roosts built for them to perch on — simply because they'd never perched on a roost before. Jason sent his exhausted family home, strapped a headlamp to his forehead and, one by one, gently placed all 775 sleeping hens on their perches — their feet curled automatically over the roosting stick.

The story gets a lot worse before it gets better.

One reads with horrified fascination about the crippling Minnesota winter, when hundreds of eggs froze before they could be collected from the nesting boxes; the byzantine demands by government inspectors; the 16-hour days and bone-deep weariness of running a poultry farm; the broken pumps and farm machinery that constantly required fresh infusions of cash; the moving of the heavy fence to rotate pasture land; the daily feeding, cleaning and watering of the chickens; the daily crawling through chicken droppings to collect eggs from the nesting boxes; the endless washing of hundreds of eggs every day; the persistent ordure and odor of chicken; and the looming specter of bankruptcy.

Of all the many mistakes these newbie farmers made, their biggest, says Jason, was in not understanding the regulatory environment.

"Although we got the rules from the state of Minnesota regarding egg processing before we got chickens, we did not have a conversation with the inspector in advance," he told me. "As a result, when the inspector arrived, he said we had received an incomplete set of rules and that we failed. We had to adapt. It wasn't pretty, and though we eventually passed, it was an expensive and a painful lesson in the necessity of doing more research and planning before getting into business. Sadly, most every business will have some version of this story and you have to be ready to dig really deep and shoulder through these events. There's just no other way."

Given the hurdles they had to surmount, the happier stories — and there are many — of how family and friends rallied to aid the beleaguered Amundsens are heartwarming. Friends helped with the egg washing and organized "ovum speakeasies" to help sell eggs that were piling up. And almost all of Duluth rose up to support the farm in a competition to get a free ad spot during the Super Bowl (they didn't win, but came close). A grateful Lucie calls it "an explosion of community."

Written with candor, sarcasm and humor, Locally Laid is, to pluck a phrase from the book, an immersion into "a loud, flustery poultry tsunami." It cures one of any residual romantic notions of playing farmer; makes one appreciate afresh how grueling and risky it is to operate a midsize family farm; and explains why their products are more expensive.

It's scarcely surprising that with each passing year, fewer and fewer individual farmers have the resources or stamina to keep at it, yielding the field to industrial-size egg-laying operations. 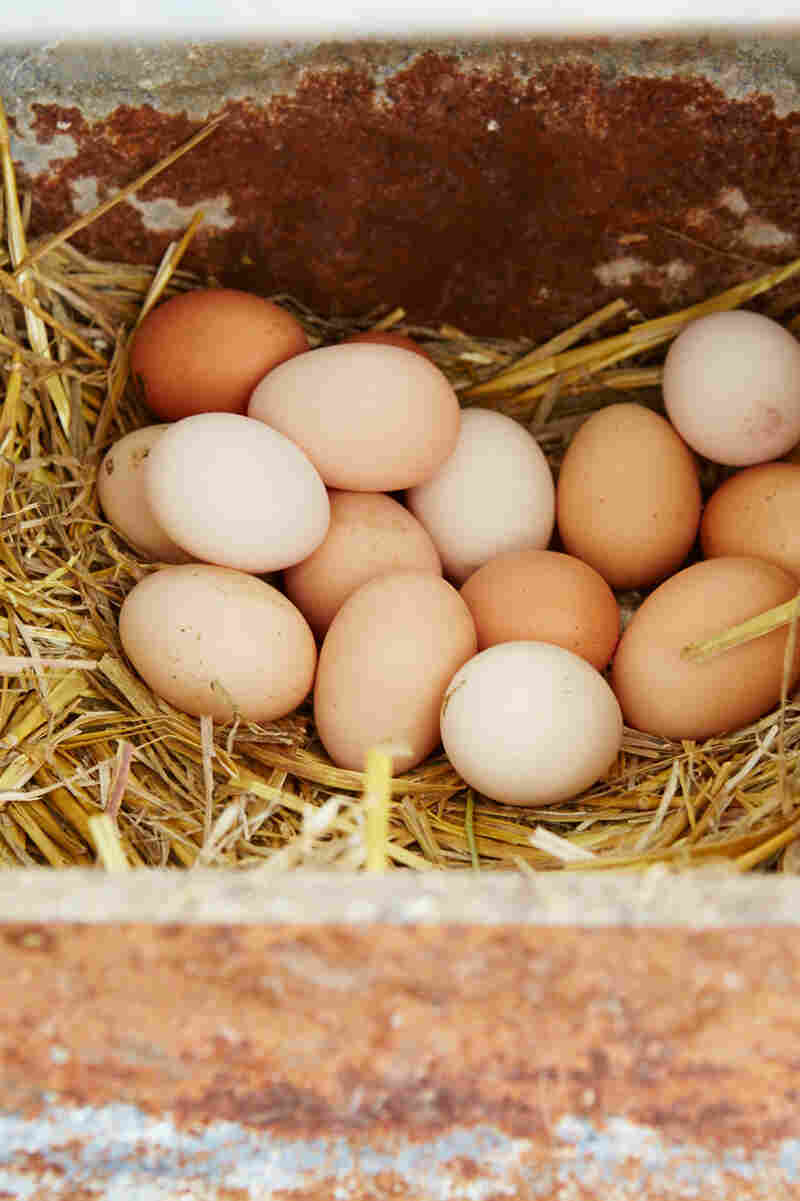 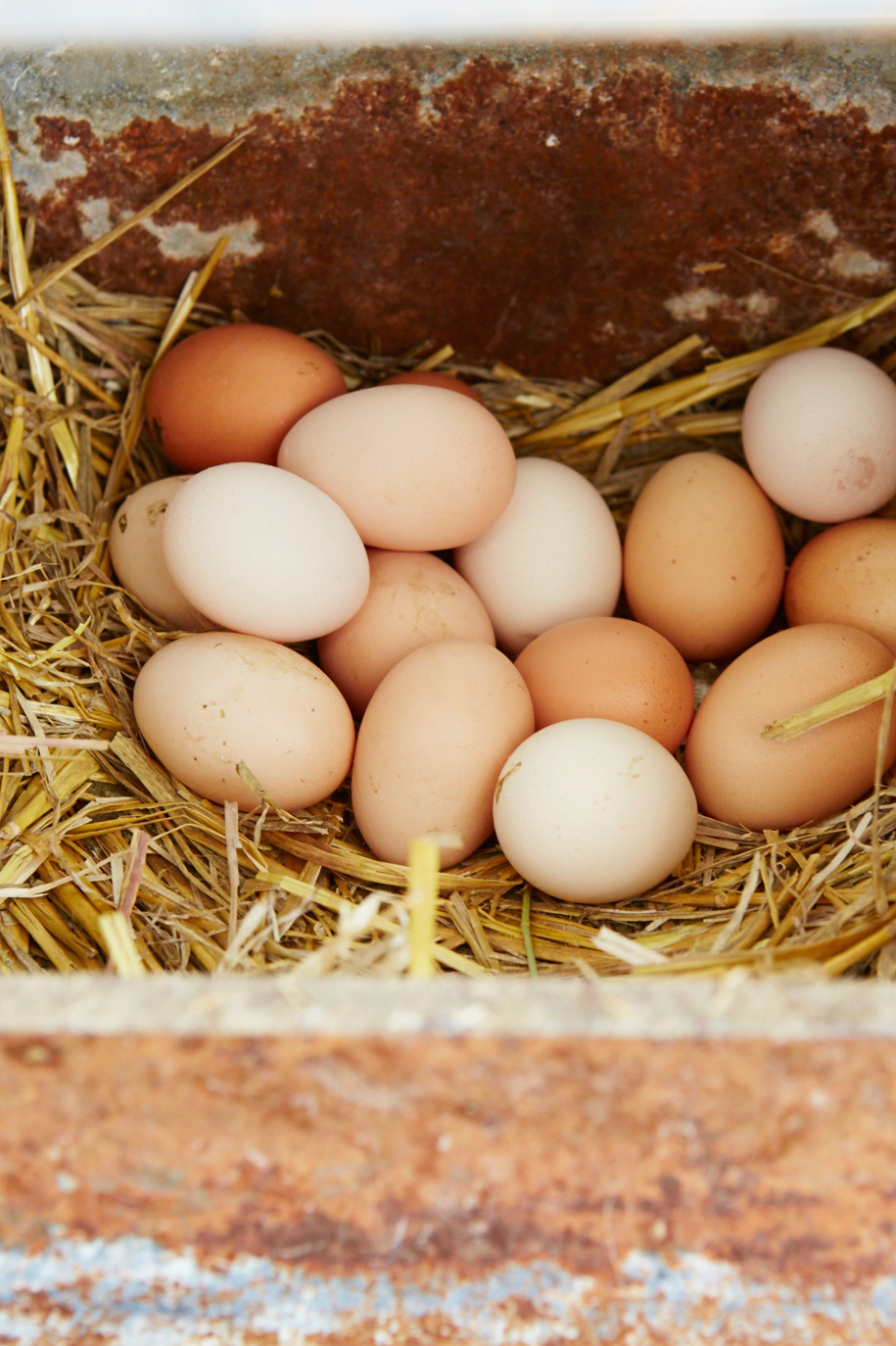 But simultaneously, the impact of the locavore and organic food movement, though small, has been significant. The Amundsens have found that a growing number of customers, including several of Duluth's top chefs, don't mind paying more for their brown and speckled eggs.

To keep their carbon footprint small, Locally Laid's eggs are sold only within a 400-mile radius of the farm. "Sometimes this philosophy makes distribution a nightmare," says Lucie. "When we'll have a glut of eggs in one region, but can't bring them to a different buying area because it's outside of the mileage limit. Then we give them to food shelters. Also, we do other environmental work, like planting a tree with every delivery."

Today, Locally Laid — along with its seven partner farms in Iowa and Minnesota — sells approximately 38,000 dozen eggs a month. The sense of achievement is enormous. But four years of toil and stress have taken their toll.

"When Jason jokes that the farm was his midlife crisis and it was either that or have an affair," writes Lucie wryly, "I find myself wondering which would have been more difficult on our family."