Accessibility links
Darjeeling 2.0: Last Auction Of India's 'Champagne Of Teas' Goes Digital : The Salt Darjeeling is one of India's most prized and priciest teas. For over a century, it was sold at live auctions steeped in tradition, with all due pomp. But the last of those auctions ended this month. 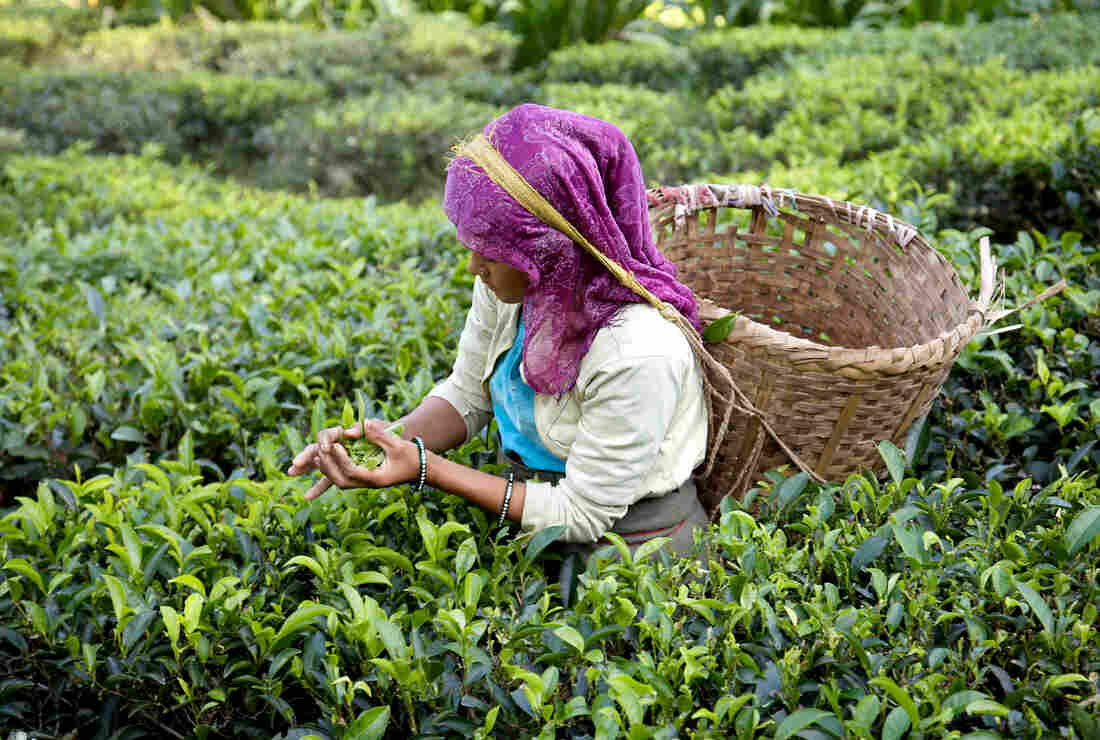 A tea plucker at the Glenburn tea estate in the Himalayas. Jeff Koehler hide caption 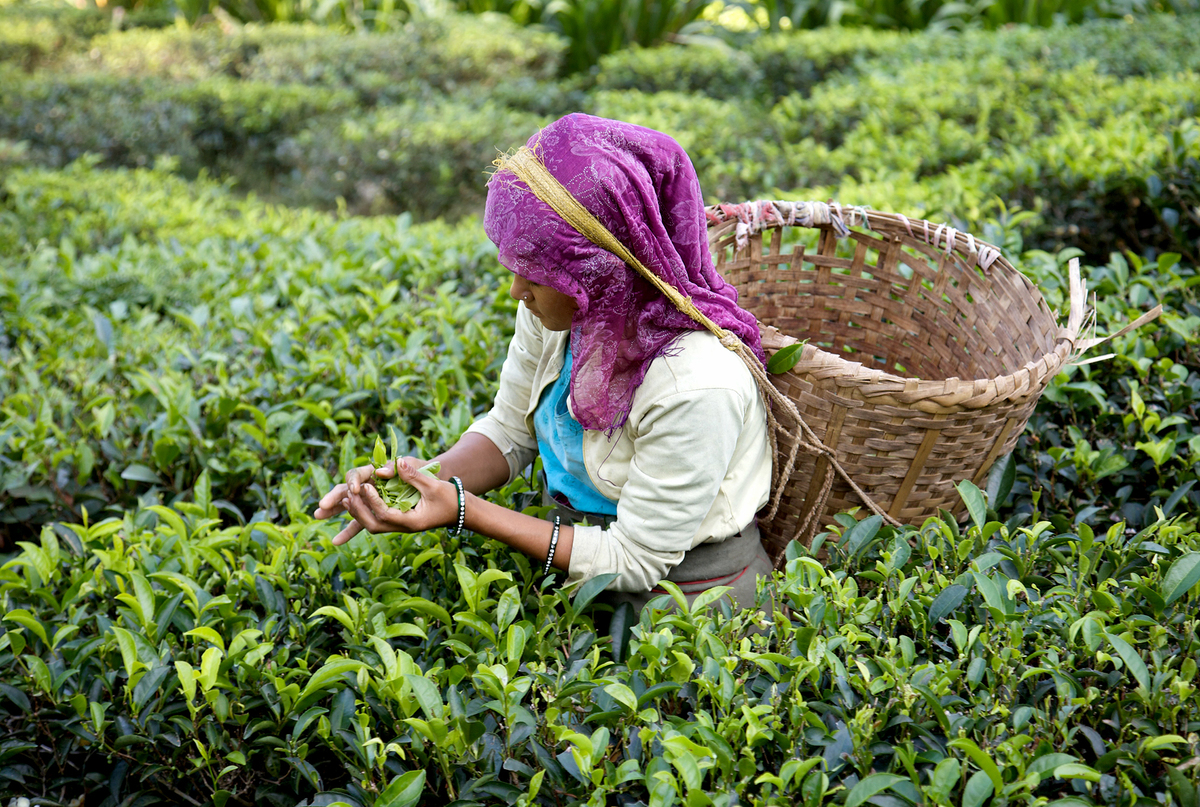 A tea plucker at the Glenburn tea estate in the Himalayas.

I must admit I have dunked a tea bag into hot water and called it tea. I have even made Darjeeling tea, sometimes called the champagne of teas, from a tea bag.

For tea gurus like Anindyo Choudhury, that is sacrilege. "I wouldn't even touch it," he says.

Most tea-bag teas are chopped and cut by machine instead of being rolled and twisted, hand-plucked and hand-processed. The best Darjeeling tea is loose leaf, steeped for a couple of minutes in hot water — it's light and bright.

When Choudhury describes it, he sounds as if he's talking about wine. He gets excited about what he calls the "muscatel," a "nice fruity flavor" that he says is "very hard to come by." He talks about tea "maturing" over a week or two, its flavors deepening.

Choudhury drinks a lot of tea. For almost two decades, it has been a part of his job at J Thomas & Co. Pvt. Ltd., the oldest and largest tea auctioneer and broker in the world. The first public sale of tea took place in its Calcutta offices in 1861. 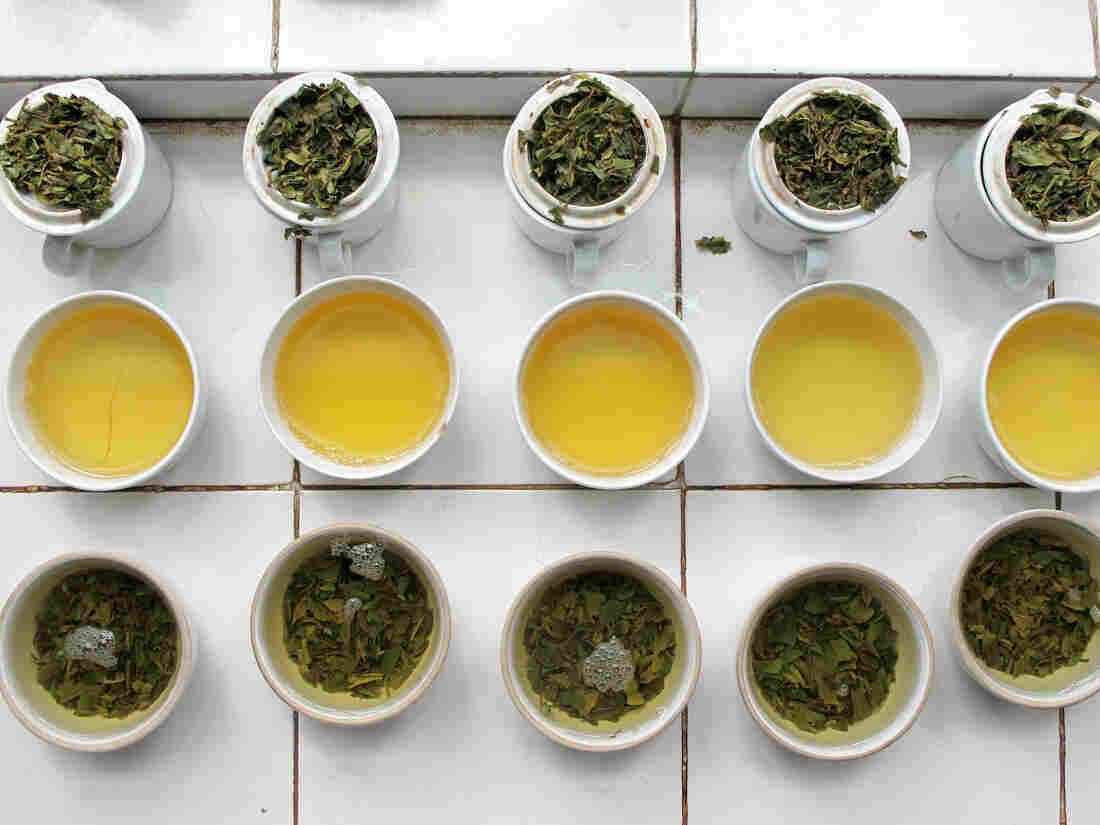 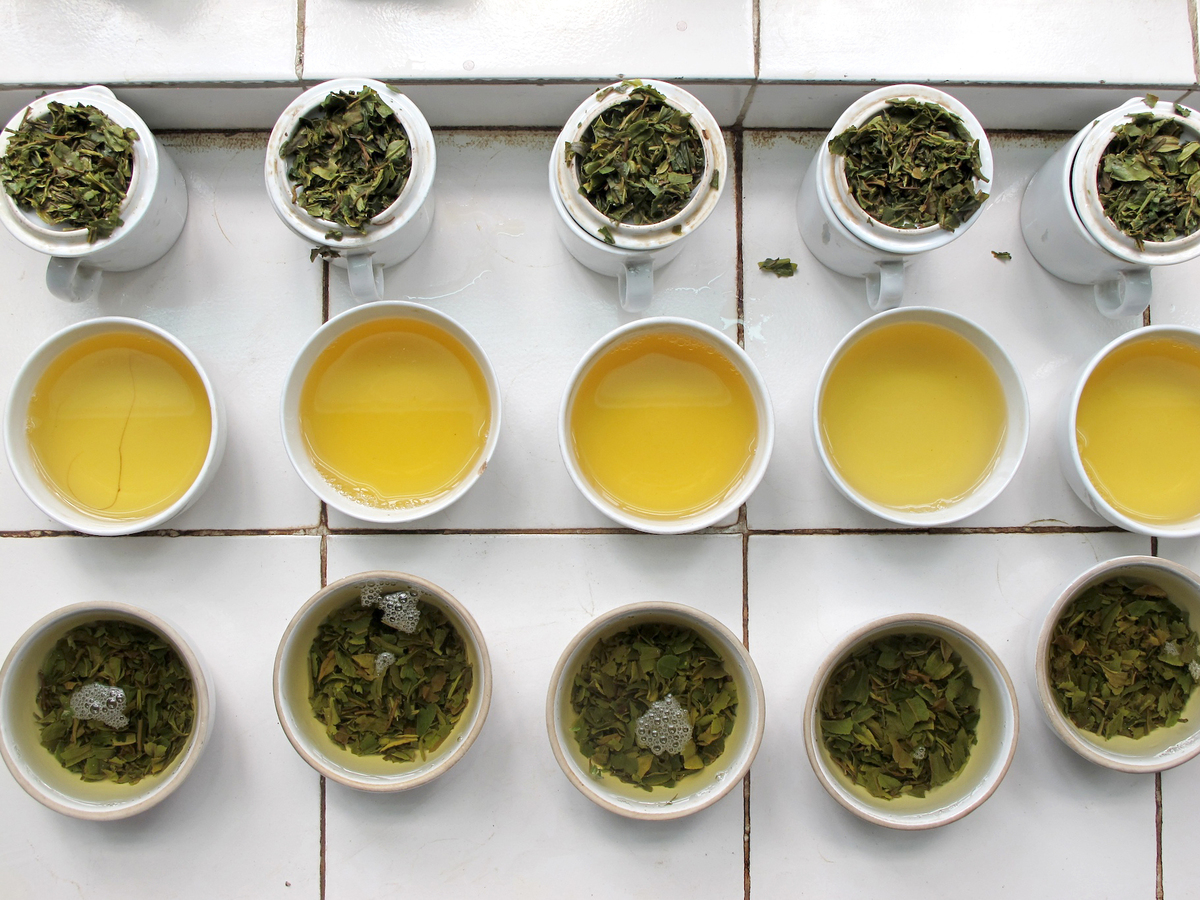 Darjeeling teas come from just 87 tea estates in the Himalayas, and they are marketed not just by estate but also by harvesting season — or as it's called in the tea world, flush. Teas may be listed as "Goomtee Estate, first flush" or "Marybong Estate, second flush." Each one is just a little different in flavor.

The various teas arrive in the warehouses three weeks before each auction. The auctioneers at J Thomas then catalog them, taste them, value them and distribute samples to the buyers. When it's peak season, Choudhury tastes up to 2,000 cups a week as he prepares to auction the tea every Tuesday. Early summer — during the "second flush" — is when Darjeeling tea is supposed to be at its most vibrant, its colors at its deepest and the auctions at their busiest.

India produces about 8 million kilos — or about 17 million pounds — of Darjeeling tea each year. Usually, estates sell as much as they can to buyers and exporters directly. The rest — about 3 million kilos — they send to J Thomas.

Back in the day when most of the tea came to auction, buyers from all over the world would attend. The auctions ran two days long and came with lunch included.

In recent years, as most tea auctioneers switched to online sales, J Thomas was the last holdout, insisting on selling Darjeeling at live auctions just as it has always done.

"Very few auctioneers wear ties anymore," says Choudhury. But at J Thomas, "we ensure we look the way we looked 30 years ago." According to him, the champagne of teas deserves the pomp and ritual of a live event.

But that all ended this month, when J Thomas finally relented and agreed to sell Darjeeling via electronic auctions. 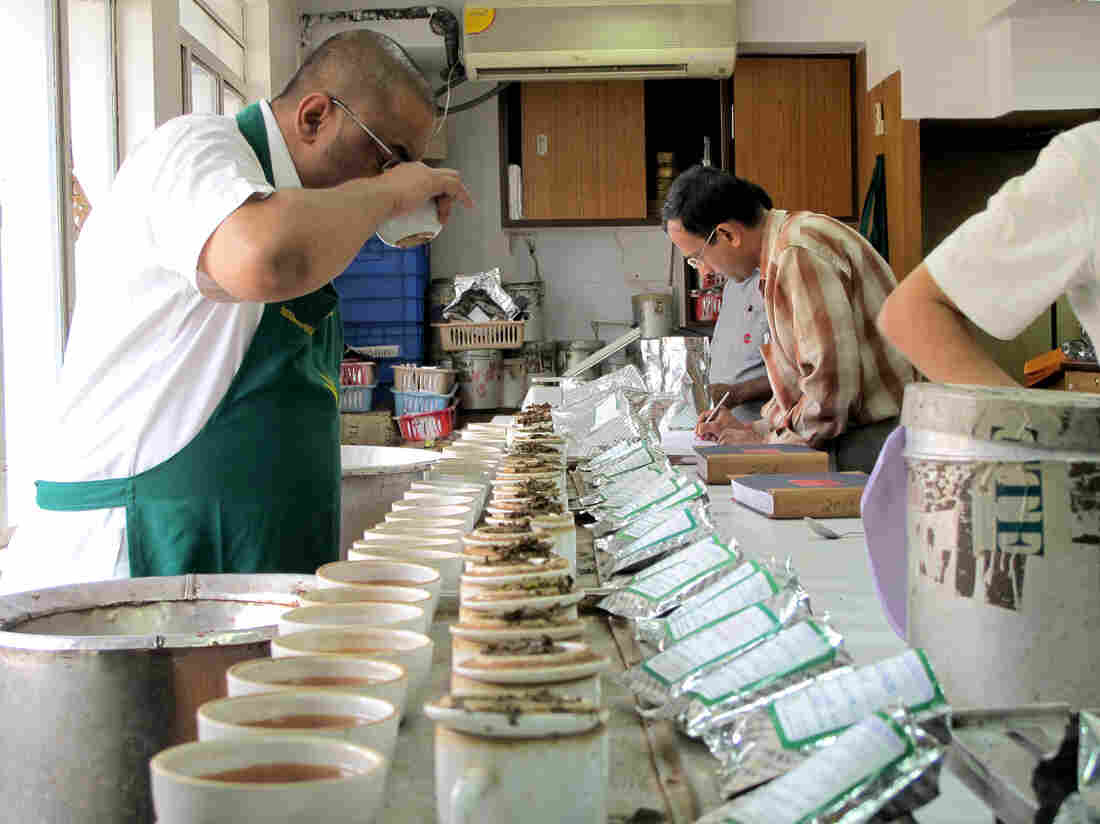 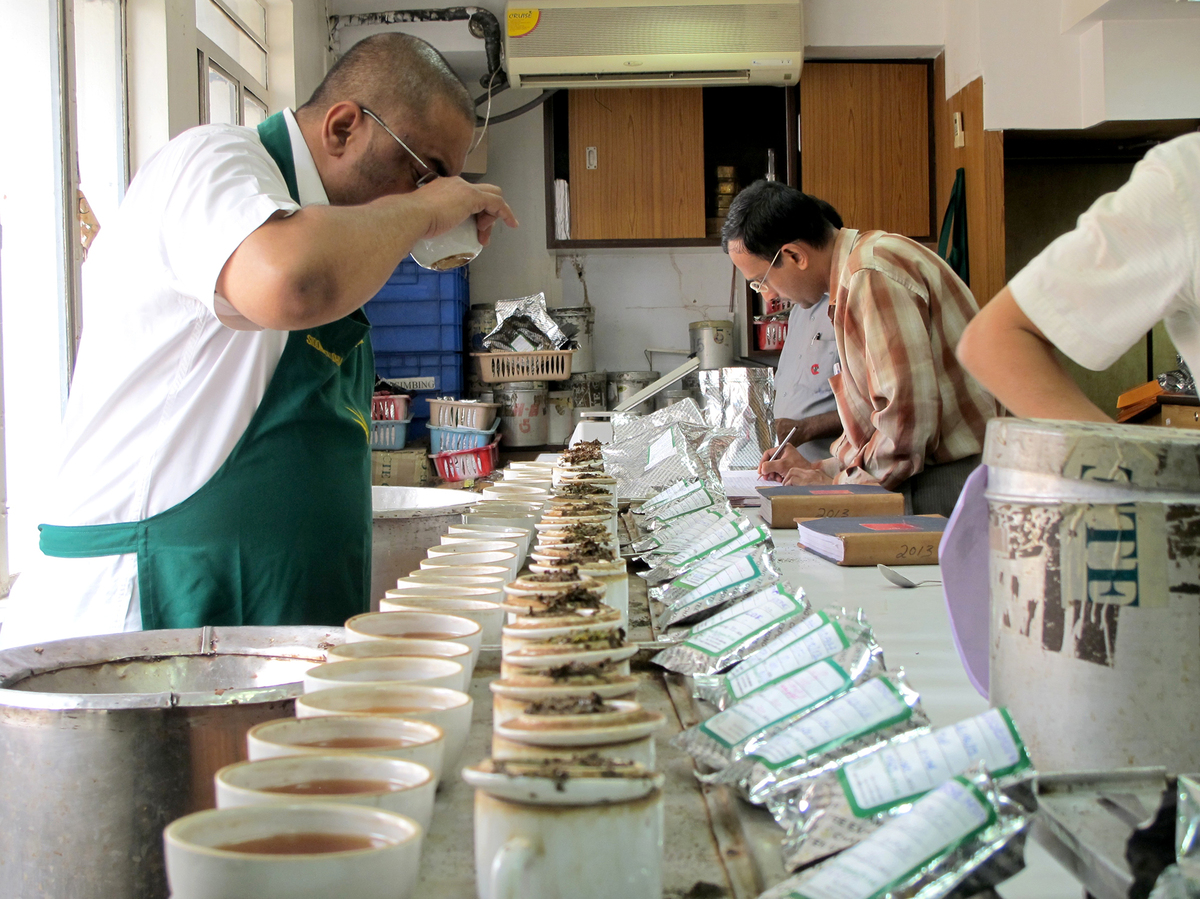 For Choudhury it seemed "like the sky had fallen."

Before the sky actually fell, I decided to go check out an auction — back in May. The auction room looked like a white-washed college classroom. There was gallery seating, a noisy air conditioner and middle-aged men scouring printouts with details of the day's lots. Choudhury proceeded at a brisk clip, which — he admitted — was fueled by coffee rather than tea.

Once the event was underway, he positioned himself on the dais, flanked by two associates, holding a pencil in his hand which he periodically sharpened as he proceeded down the catalog, calling out the lots and prices. Every now and then somebody would make a strange noise, like a "whoop" or an "ow."

That's to attract the auctioneer's attention and up the bid, according to Joy Majumdar, who has been attending the events for 30 years both as a buyer and a producer.

All that fell silent when the computers came in at the beginning of this month. Now Choudhury won't even have to say "Sold" and rap his gavel on the desk. "It's a sort of crematorium," rues Majumdar. "Everybody's quiet and looking into the computers."

E-auctions are hardly the biggest challenge facing this industry, admits Choudhury. He ticks them off: "Issues of yields, chemicals, pesticides ... these are more viable challenges." Finding workers willing to do the backbreaking labor of picking tea leaves is a challenge as well, he says. Plus, the tea bushes are old, the ecosystem is fragile and there's political unrest in the hills.

And there are new challenges on the horizon. Later this year, the Protected Geographical Indication for Darjeeling Tea kicks in. Like Scotch whisky or Parmigiano cheese, only 100 percent Darjeeling tea, grown in Darjeeling, will be called as such.

As of now, about 88 million pounds of tea are sold as Darjeeling per year --- five times what the Darjeeling tea estates actually produce. The new law will protect the Darjeeling name, but it's going to drive up prices by driving down supply, according to Jeff Koehler, author of Darjeeling - The Colorful History and Precarious Fate of the World's Greatest Tea.

Tea producers in India are also nervous about how customers will react to the price hike, and they worry that brands will start selling blends as "Himalayan" teas to avoid the hassle of the Darjeeling label.

Even in India, Darjeeling is a boutique tea: This is a tea-drinking country but most consumers prefer cheaper brews, well-boiled with milk and sweetened. Darjeeling makes up less than 1 percent of the 2 billion pounds of tea that Indians consume each year.

Darjeeling is a little tea that casts a big shadow — it's special because it's rare and handled with painstaking care, using methods that are more than a century old.

"It takes 22,000 individual plucks of two leaves and a bud to make a single kilo of Darjeeling tea," Koehler says.

And though it won't be presented and sold with as much pageantry as it has been, Darjeeling tea will still be hand-plucked. And auctioneer and connoisseur Choudhury will still search for that elusive muscatel and stay far away from tea bags. As for his auctioneer's gavel — a piece of tradition from a tea that's steeped in it — Choudhury says, "I'll take it home, display it on my table."