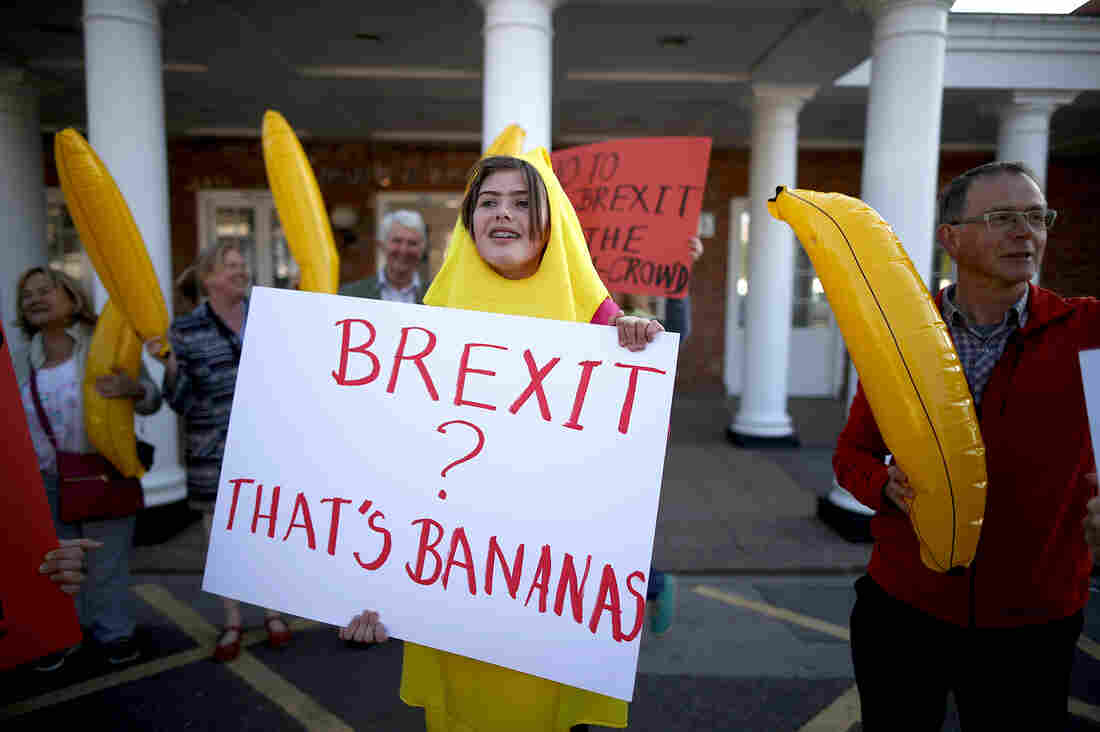 Anti-Brexit supporters dressed as bananas protest outside a racecourse in York, England. "It is absolutely crazy that the EU is telling us what shape our bananas have got to be," says Brexit's foremost cheerleader, Boris Johnson, the former mayor of London, invoking one of the oldest and most persistent tall tales about EU bureaucracy. Christopher Furlong/Getty Images hide caption 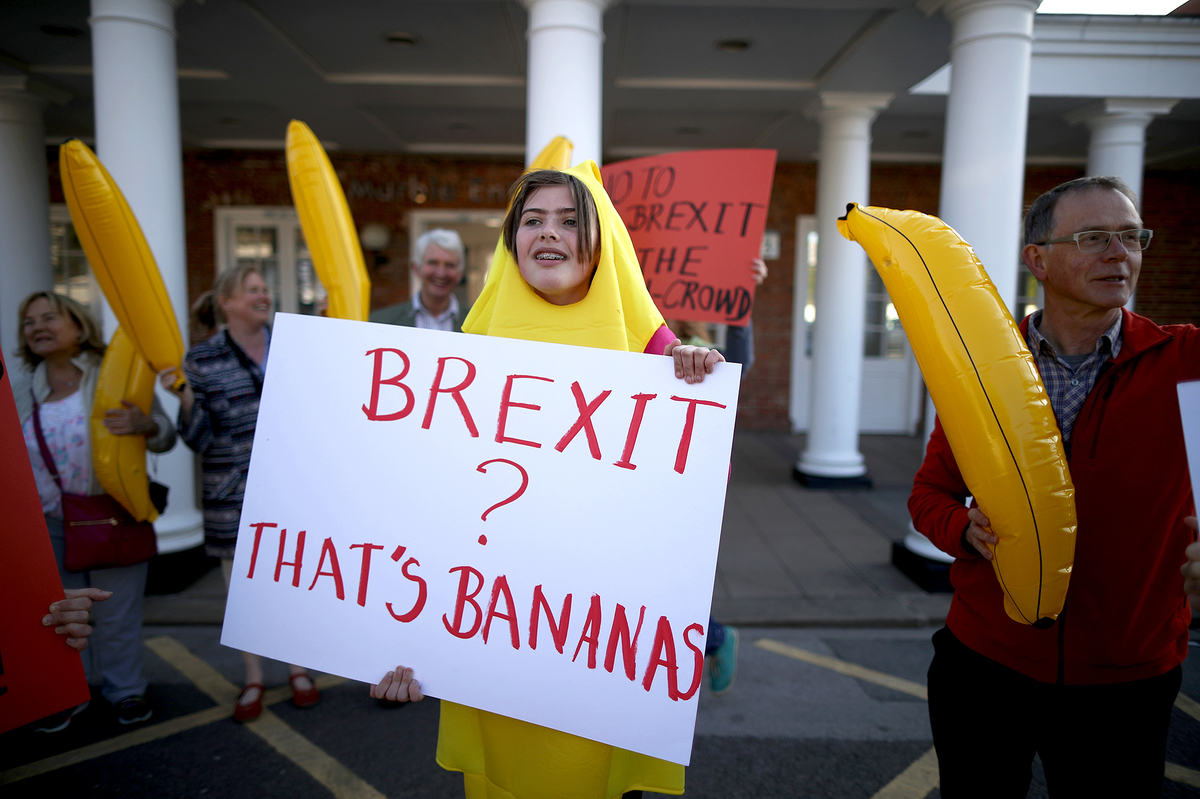 Anti-Brexit supporters dressed as bananas protest outside a racecourse in York, England. "It is absolutely crazy that the EU is telling us what shape our bananas have got to be," says Brexit's foremost cheerleader, Boris Johnson, the former mayor of London, invoking one of the oldest and most persistent tall tales about EU bureaucracy.

On June 23, the United Kingdom will vote on whether or not to split from the European Union.

Those on the Remain Team, led by Prime Minister David Cameron, say Britain will be richer, safer and stronger if it stays with Europe. Those who want Britain to exit — Team Brexit — argue that the British should be able to control their own destiny. We haven't fought two world wars, they sniff, to be pushed around by the bosses in Brussels and told what sort of bananas to eat. Yes, you read that right: bananas.

"It is absolutely crazy that the EU is telling us what shape our bananas have got to be," says Brexit's foremost cheerleader, Boris Johnson. The former mayor of London, whose mop of blonde hair is as artfully tousled as his facts, was cannily invoking one of the oldest and most persistent mistruths about EU bureaucracy – that it has banned "bendy bananas" from being imported into the U.K.

EU rules do not ban any kind of banana, no matter how straight or curved it may be. What they do, however, is classify the pricing of bananas according to their shape: The best ones must be "free from malformation or abnormal curvature;" the next best can have "slight defects of shape;" and the cheapest or poorest quality can display "defects of shape." And though this grading scheme might discriminate against a perfectly good but defectively shaped banana, it hardly amounts to a ban.

The bendy banana saga is perhaps the most notorious of what has come to be known as the Euromyth. Over the last two decades, British tabloids have exploited the U.K.'s deeply ambivalent relationship with the European Union by publishing exaggerated, funny and often completely unfounded stories about how the "barmy bureaucrats in Brussels" are out to destroy old English traditions and the British way of life. Coming up with creative scaremongering is something of a national pastime for the press.

These myths pertain to every aspect of life: church bells to be silenced; fishing boats obliged to carry condoms; U.K. hospitals forced to employ people who do not speak English; women to turn in their old vibrators for recycling before they can buy a new one. And so on. But the largest number concerns food and drink. And since the EU is always putting out new guidelines concerning food safety, hygiene, farming, dairy and health, the tabloids have plenty of fodder to work with.

The standard trick is to take a general guideline and interpret it as a caricaturist would – as mischievously and outrageously as possible.

Take, for instance, the case of the full English breakfast. Few injustices can stir an Englishman to mutiny more quickly than the thought of a bunch of suits in Europe banning his morning repast of bacon, sausages, eggs and broiled tomatoes. In 2001, when the EU put forth some very general guidelines on the need to improve the health and safety of truckers, The Sun decided to spin it as a ban on fry-ups. "European Union bosses want to put the brakes on the full English breakfast," it sizzled. "Last night, lorry drivers were furious that their staple diet ... could be replaced ... by muesli and croissants."

"There is no EU plan to ban lorry drivers' British breakfast," the EU shot back. Nor did roadside "greasy spoon" cafes face any risk of closure.

One of the most popular and absurd myths concerns barmaids' cleavage. In 2005, when an EU proposal required employers to assess the risk of skin damage to employees who work in the sun all day (every year, 69,000 new cases of skin cancer are diagnosed in the U.K.), the newspapers decided to project it as an act of high prudery: The EU was using skin cancer as a ploy to get barmaids to cover up.

"Hands off our barmaids' boobs," squealed The Sun. "The EU has declared a crackpot war on busty barmaids – by trying to ban them from wearing low-cut tops. Po-faced pen pushers have deemed it a health hazard for bar girls to show too much cleavage. And in a daft directive that will have drinkers choking on their pints, Brussels bureaucrats have ordered a cover-up. They say barmaids run a skin cancer risk if they expose themselves to the sun when they go outside to collect glasses."

We have no such intentions, replied the EU, even as The Sun launched a Save Our Jugs campaign. "Of course, bar managers can always use their common sense by handing out sun cream."

Last year, when the EU passed a law on energy-efficiency requirements for new ovens and cookers, The Express rushed to accuse Brussels of "putting the Sunday roast at risk by targeting ovens to advance their green agenda." The article even quoted a cordon bleu chef (who happened to be an ardent Brexit votary) lamenting that "all our cook books will be useless." The EU politely pointed out that the cordon bleu Cassandra was wrong. Because, it said, "many cookers on the market already comply with the new rules and have not caused an epidemic of 'soggy bottoms' or involuntarily pink roast beef."

Over the years, readers have been told that Brussels is forcing Britain to rename Light Ale, mince pies, lemon curd, and yogurt to comply with new labeling laws; that Brussels will dictate the three crops an English farmer must grow; that new European Commission rules relating to listeria in cheese made from unpasteurized milk pose a threat to the iconic Stilton; that shellfish (mussels, oysters and clams) will have to be given rest breaks while being transported; that smoky bacon-flavored crisps and the sale of unwrapped sweets are to be banned. Also to be banned is ye olde English naval tradition of using wooden oars to stir the Christmas pudding. Henceforth, for purposes of hygiene, a plastic paddle is to be used.

Some of these stories are tremendous exaggerations – the mussels one, for instance, relates to rules about the humane transportation of animals like sheep and cattle. Others – such as the one about unwrapped sweets, Christmas pudding and the "hysteria over listeria" – are downright fabrications. As is the spicy story about how the politically correct EU has decreed that the savory snack called Bombay Mix is to be renamed Mumbai Mix. The EU, tongue firmly in cheek, replied: "Any suggestion that the EU would get 'mixed-up' in renaming this or any other snack is completely ludicrous."

But it's impossible to out-pun the press. Never mind the tabloids, even The Times can't resist indulging in a spot of Euro-mangling. "Crumbs, now home-made cake is dangerous," it announced in 2004. "If baking for the school or church fête was not onerous enough, the Government could soon ban home-made cakes from sale unless they carry a special label declaring whether they contain nuts." (EU labeling rules do not apply to homemade foodstuffs.)

The EU got so weary of these tall tales, it set up a page listing and countering over 500 of them in alphabetical order.

Some of the myths are so funny and imaginative that one can almost forgive the tabloids their fun – except that it causes confusion and spreads misinformation about the EU. According to a recent study, 15 percent of the U.K.'s population believes at least one Euro-myth. A fourth of the population has swallowed the bendy banana ban.

If the tabloids are to be believed, the British Isles are quivering with thousands of "enraged," "red-faced," "fearful" and "irate" lorry drivers, barmaids, pub goers, cheese eaters, bakers, farmers and Euroskeptics of every stripe. The future of bananas and barmaid couture is at stake. On June 23, we'll find out which way it bends.