Accessibility links
Amid Craft Brewery Boom, Some Worry About A Bubble — But Most Just Fear Foam : The Salt Fueled by customers' unquenchable thirst for the next great flavor note, the craft beer industry has exploded like a poorly fermented bottle of home brew. 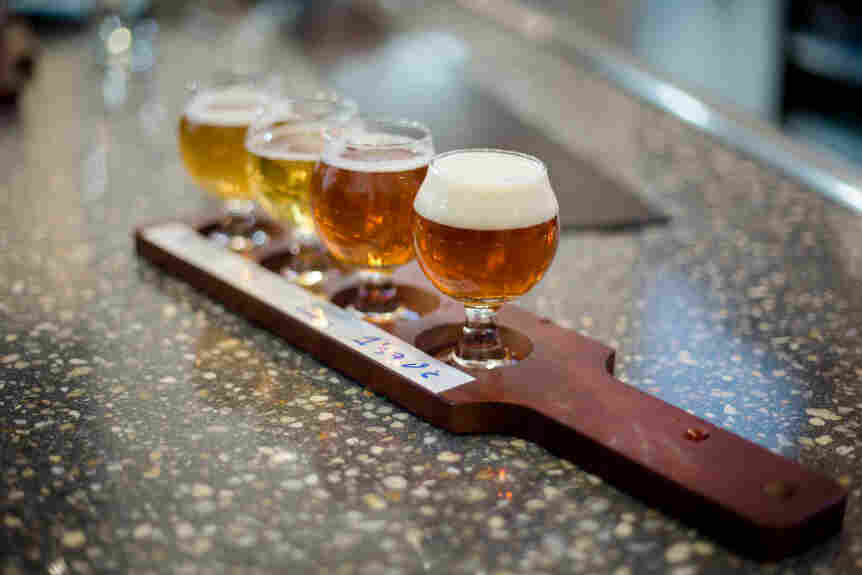 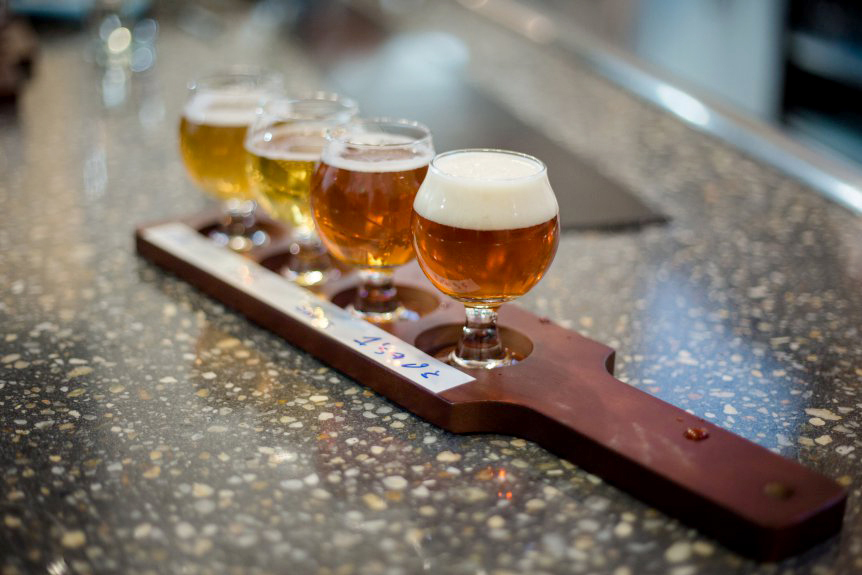 So you think that beer you brewed in your kitchen is ready for prime time, and you're thinking, "Maybe I should take the plunge and set up a little craft brewery."

You're not the only one with dreams infused with hops and malting barley. During the past couple of years, new breweries were being launched at the rate of three a day in the U.S.

New District Brewing is one of them. It just popped up in a cinder-block building in an Arlington, Va., light-industrial park.

On this particular evening, co-founder Mike Katrivanos is behind the sleek tasting room bar, where eight NDB originals are on tap. He makes sure all his patrons know that he's a "local" — his grandmother lived just a couple of blocks from here.

Local is a big deal in craft brewing.

"Folks, when they come to a brewery, they want to meet the brewers," Katrivanos says. "And they want to connect with what they're drinking."

Another big thing is, of course, flavor. 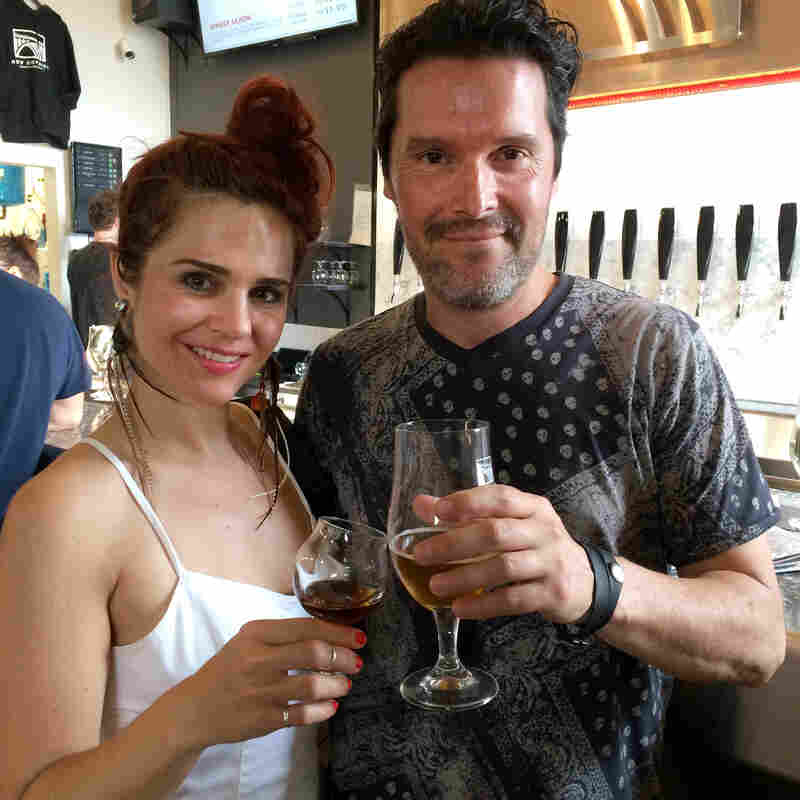 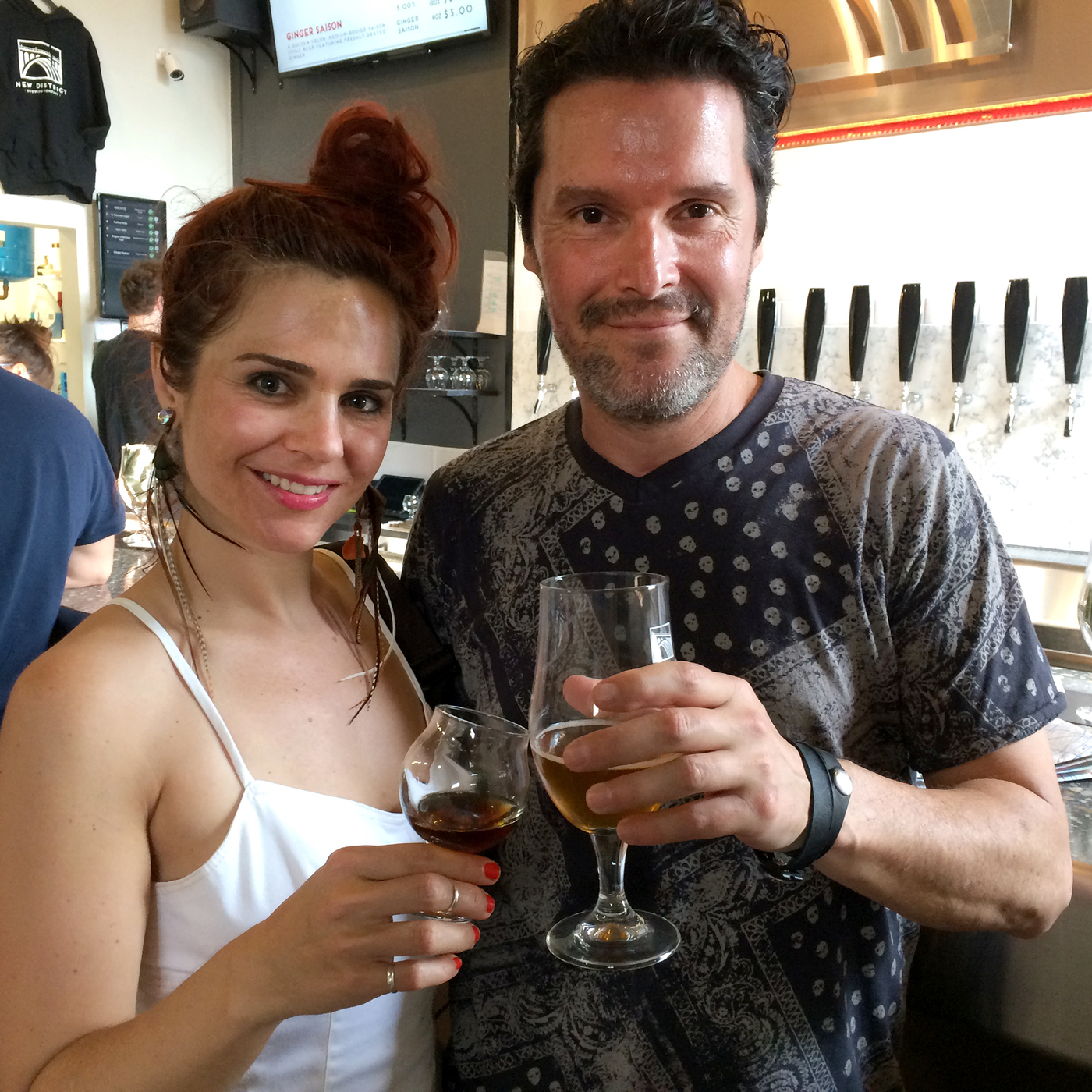 Regulars Don Ripper and his friend Chana Morrow, who show up about once a week, are here for a tasting this evening.

Morrow has a darker brew, called Origins Unknown. "Nutty, malty," she says, as she savors.

A desire for beers that have more taste is, not surprisingly, a big part of what's driving the demand for craft beer. Just ask New District regular James Miervaldis — he says he loves the variety here and "how they experiment."

So, fueled by the unquenchable thirst of its customers for the next great flavor note, the craft beer industry has exploded like a poorly fermented bottle of home brew. Now 1 in every 8 beers sold in the U.S. is craft beer, and more than 20 percent of the money consumers spend on beer goes to independent and small brewers.

Flying Dog Brewery in Frederick, Md., was founded in the 1990s. But CEO Jim Caruso says there's been an even bigger boom since 2008, with a growth rate that's pushed the number of craft breweries to more than 4,000. Meanwhile, Caruso says, beer titans like Budweiser, Miller and Coors have seen sales trend down. 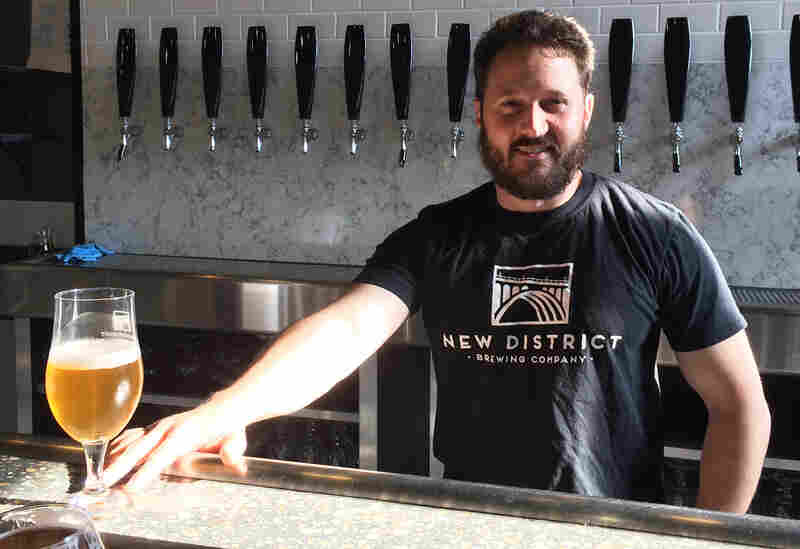 "If you're getting into brewing specifically to make money," says Mike Katrivanos, "I'd advise against it." Katrivanos is a co-founder of New District Brewing. John Ydstie/NPR hide caption

So the giant brewers have taken action. Anheuser-Busch has bought up a number of craft breweries, including Seattle's Elysian Brewing and Chicago's Goose Island, and Constellation Brands just paid $1 billion for Ballast Point, a San Diego craft brewer.

These developments, Caruso says, are persuading some people to start brewing because it's the next "get rich quick" scheme. And that's led to some newcomers "putting out some bad beer," he says.

He worries that if consumers get a few bottles of beer that's not good, they may get turned off the industry. "It may be months or years before they come back and try it again," he says.

But say you're confident in your brewing skills: Is there still time for you to get into the business?

Probably, says Bart Watson, an economist for the Brewers Association. New brewery openings outnumber closings nearly 10 to 1, Watson says. And the industry, which adds around $55 billion a year to the U.S. economy, now helps support 424,000 jobs.

But some parts of the country have become pretty crowded — perhaps overcrowded — with new breweries, Watson says. San Diego County, Calif., has more than 110 breweries, and Portland, Ore., has 60, just in the city proper. "Those places are really pushing the limit," he says.

The craft beer movement largely started in the West, Watson notes, and is now moving eastward. That's partly because state regulation of alcohol was strongest in the East after Prohibition and has been loosened more slowly. So, Watson says, in the East and the Southeast, there's lots more room for craft beer to grow.

And Watson offers another statistic that should ease concerns about a brewery bubble forming: There are about 8,000 wineries in the United States, and, he says, "Americans drink a lot more beer than they drink wine." So, he says, as long as many of them are small, and locally focused — "like a local restaurant" — he thinks there are plenty of opportunities and market niches where small brewers can thrive.

So go ahead, start your own brewery. Just expect to come up with an initial investment of around $500,000, and don't expect to get rich, says New District's Katrivanos. He is hanging on to his engineering job at the Pentagon until his brewery can pay him a salary. "If you're getting into brewing specifically to make money, I'd advise against it," he says. If that's your goal, he says, "You should go start a tech company."