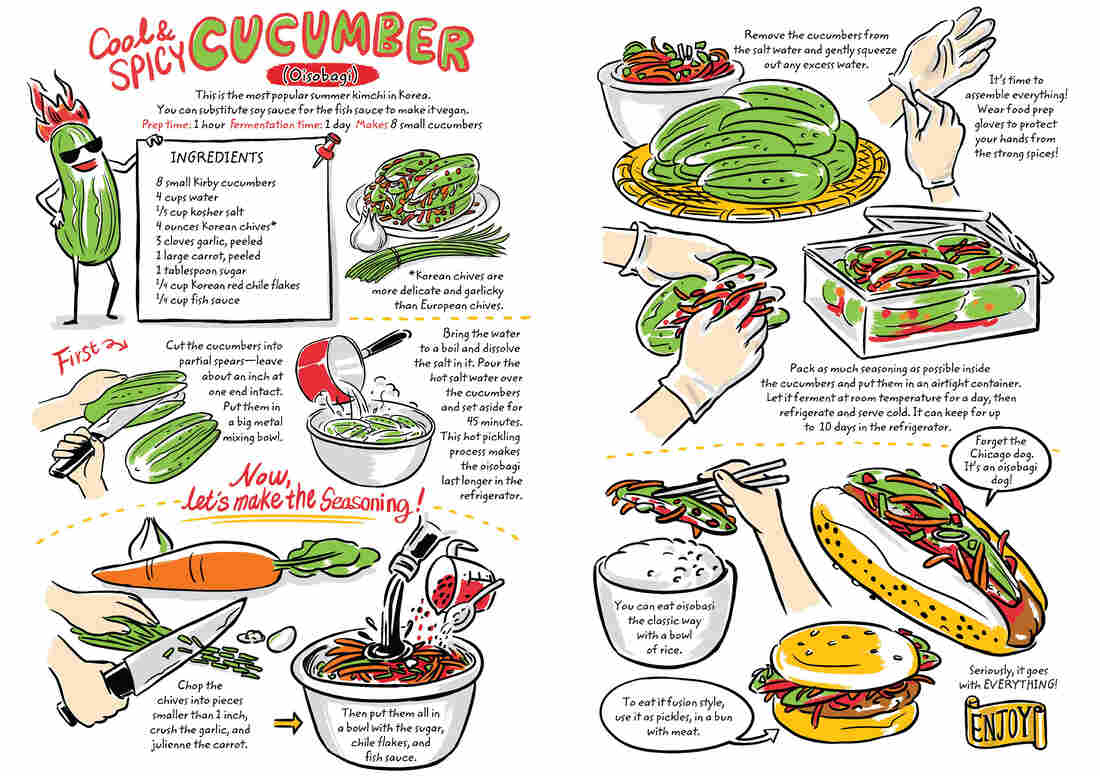 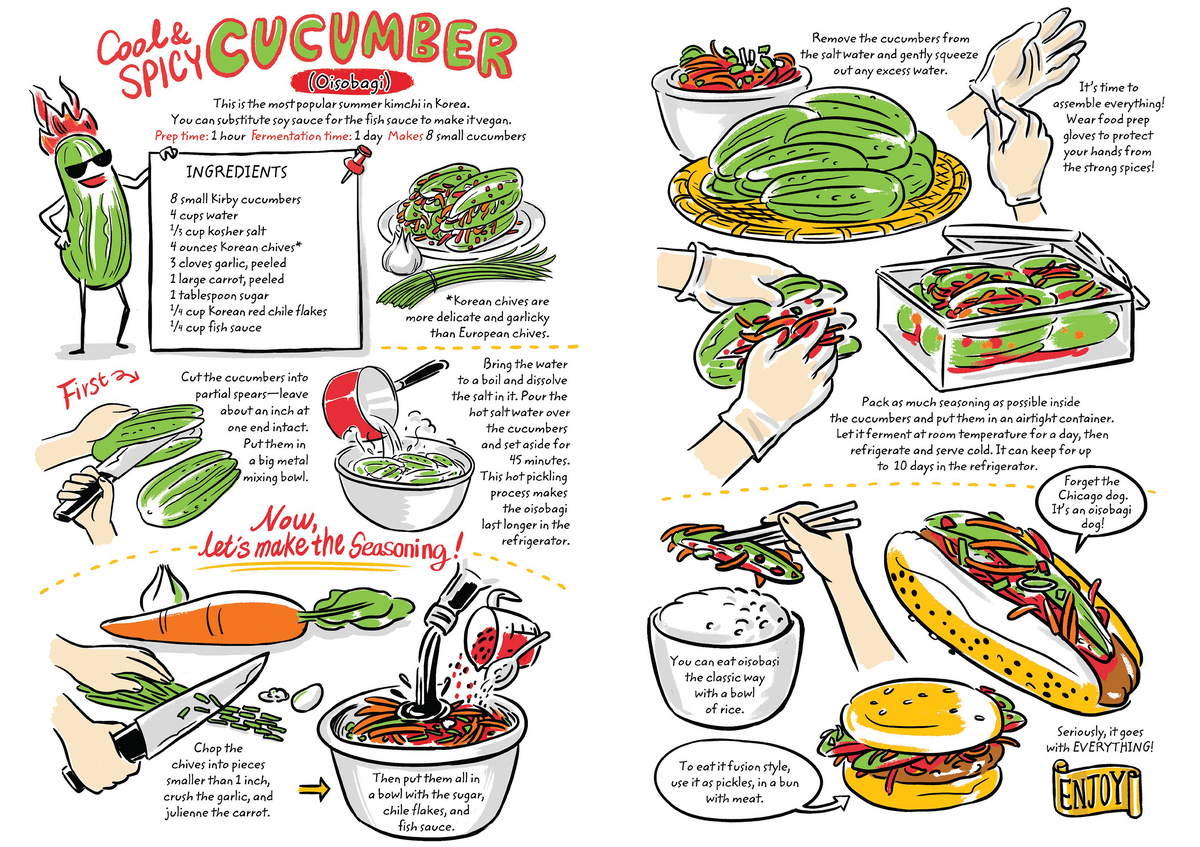 "We are a very 100-percent-or-nothing culture," says Robin Ha, the author of a new graphic cookbook Cook Korean! Cold noodles may be served with ice to keep them frosty. Hot soups are served from a still flaming burner. Fish are often air dried or fermented.

For diners with increasingly diverse tastes, Ha believes Korean food can be quite welcoming. Much of it is easy to make and, due to the heavy use of fermentation, can last a long time without refrigeration. (Perfect for a grab and go lunch!) Most recipes don't even require an oven. "It's all sautéing or putting things in a pot to boil," Ha says. 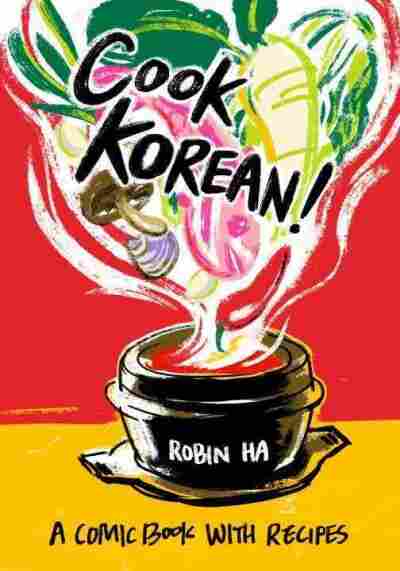 A Comic Book With Recipes

This charming cookbook uses brightly colored illustrations to break down the process of making dishes like acorn jelly salad (dotorimuk) or kimchi stew (kimchi jjigae). Ha even created a cartoon narrator named Dengki to talk readers through each recipe. Having Dengki on each page is like seeing Microsoft's detested Clippy transformed from a talking paperclip into your older sister's cool best friend.

For those dabbling in Korean food for the first time, Ha recommends trying stir-fried meat dishes, the one-pot chili chicken soup, or the vegetable side dishes known as banchan that usually take only 15 minutes to make. Typical banchan include spicy bokchoy (cheonggyeongche muchim), bean sprout salad (kongnamul), and pan-fried tofu (dubu buchim). "You can eat the sides for every meal and add them to anything you're already eating — even pasta," Ha says.

The book is divided into 10 sections with subjects like snacks and street food, cocktails, and, of course, kimchi. Even those unfamiliar with Korean food have likely heard of kimchi, which is now sold in mainstream grocery stores and makes appearances on hot dogs, in fried rice, and more. Ha calls kimchi "an indispensable part of any Korean meal." While the most common form of kimchi is made from spicy cabbage or daikon radish, there are over 100 different varieties to choose from. 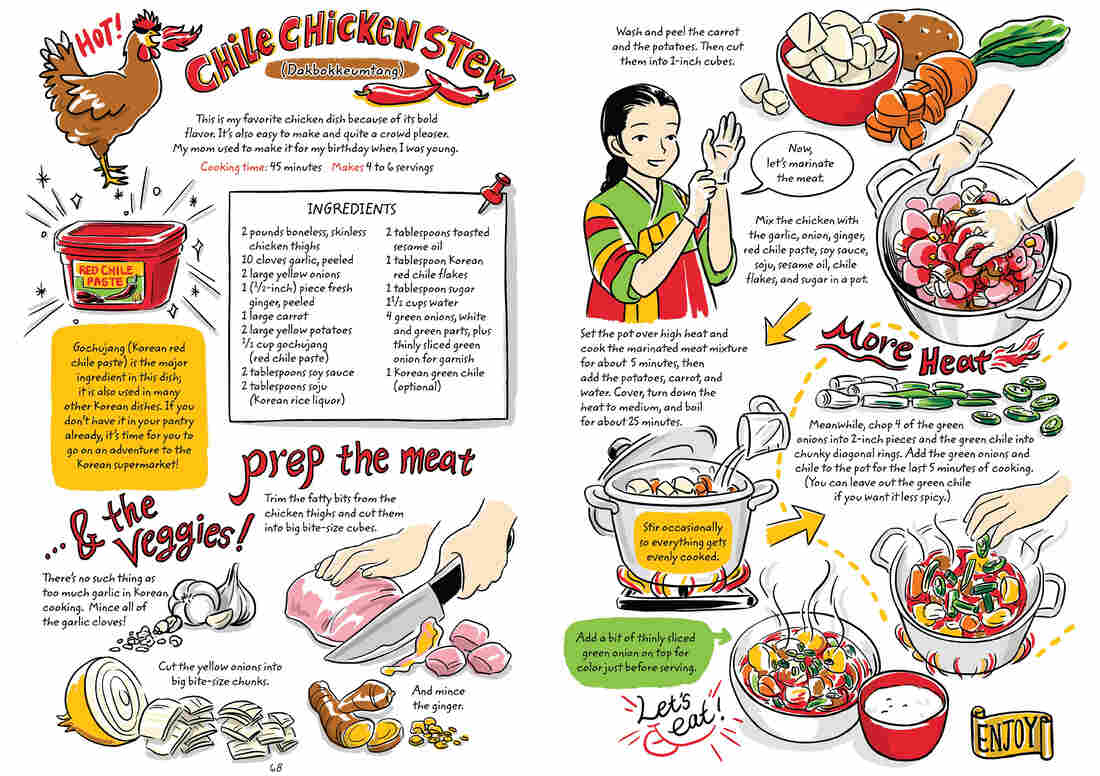 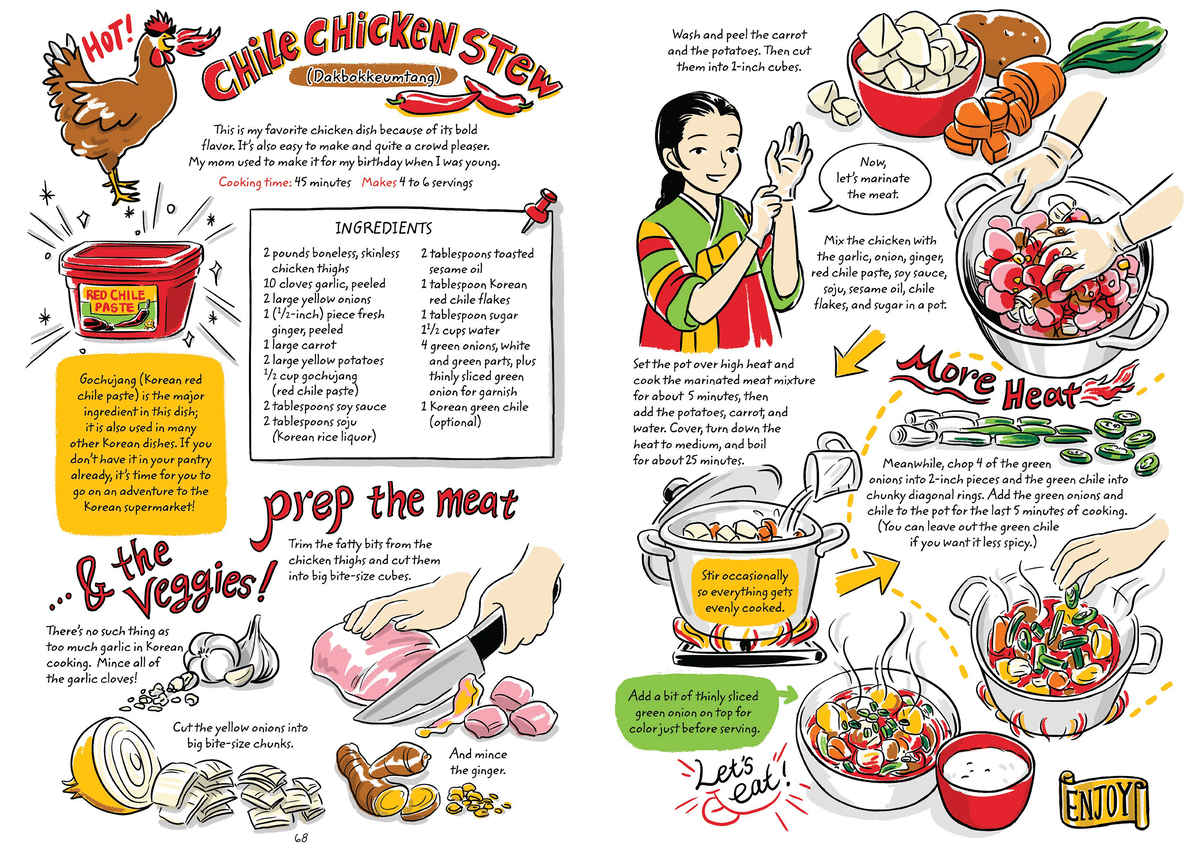 Rather than just jumping into a list of recipes, Ha gives each section an introduction that provides a little cultural context for what the foods are. For example, it wasn't just a love of strong flavors that made Korean cuisine focus on fermented or otherwise preserved foods. The country itself has a lot of coastline and not very much land. Ha says it was simply easier to catch fish than farm large quantities of grain or raise huge herds of cattle. Though today people think of kimchi as a primarily spicy food, it wasn't until 400 years ago — when chilis were first brought to Korea by the Portuguese — that the ingredient was added to nonspicy "white" kimchi — turning it into the red variety commonly seen today.

It's a lot of information to take in from a cookbook. But the bountiful illustrations —whether it's Portuguese trade routes or how lactic acid fermentation produces kimchi —make it easy to digest and remember these little asides.

Ha wants you to know if she can cook Korean, so can you. "I know what it's like to be afraid of cooking, because I was like that most of my life," she says. A graphic artist by training, Ha writes that she didn't find her way into the kitchen until she became an adult. But when friends started asking her to explain and make Korean food for them, Ha began to keep a blog called Banchan in Two Pages — illustrated recipe comics that got popular enough for an agent to approach her about turning them into a book. 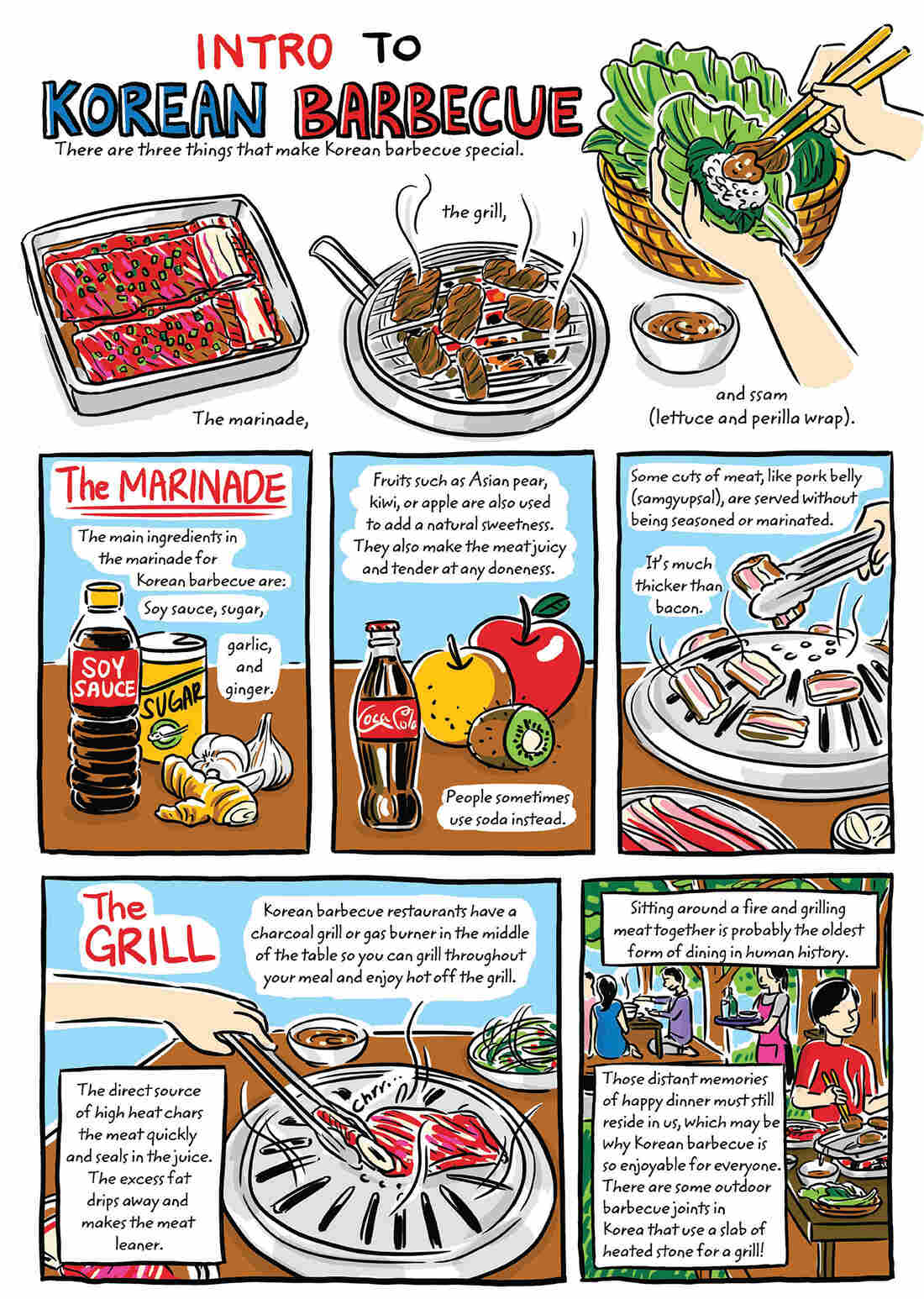 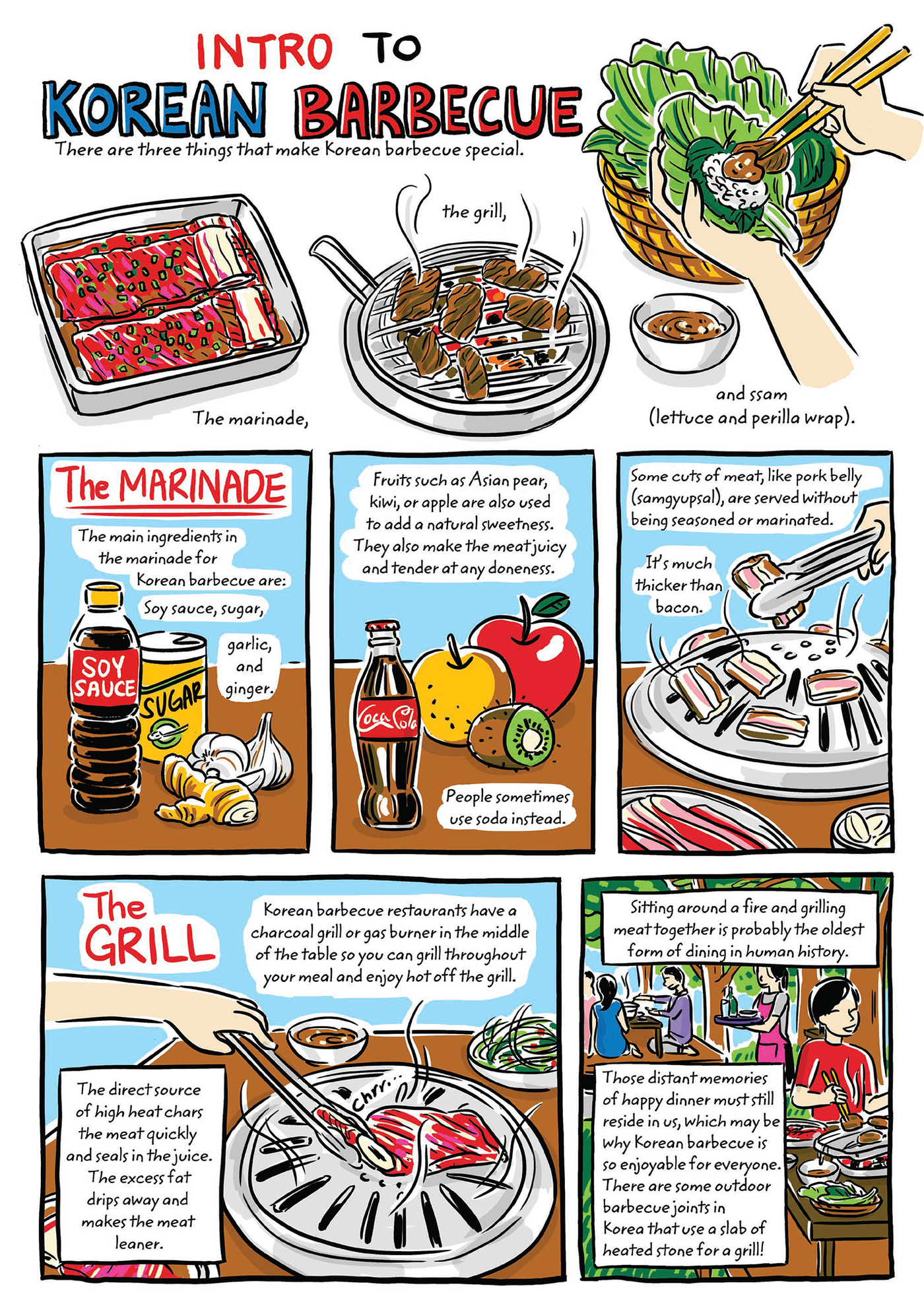 Unlike many cookbook authors, Ha never went to culinary school – she's spent more time drawing comics for Marvel superhero series than she has developing recipes. But in the case of Cook Korean! Ha's limited culinary background and artistic ability are actually the perfect combination. She diagrams simple steps like how to cut cucumbers into "partial spears" for oisobagi or how to cut and clean Korean green onions (and what to do if only the regular variety are available). These processes might stump beginning chefs but seem obvious to those who spend a lot of time in the kitchen. But Ha's words and images make it clear what each step should look like.

It's the rare home chef who finds the majority of his or her cookbooks to be anything more than aspirational. They sit on shelves like picture books of culinary delights. "They're so beautiful and perfect that I feel like I'd never be able to make it like that," Ha says. Some readers might find comics easier to follow — and the cartoon Dengki a bit more forgiving than a celebrity chef. Most recipes in the book fit on one or two pages, meaning that with a brief glance, readers can see every ingredient and step, and decipher how to make the right slice or chop for the dish.

"I think the comics medium is the best way to explain anything," Ha says.