Accessibility links
In Kentucky, Heirloom Corn Is Growing In Fields And Heading To The Distillery : The Salt With names like Hickory King and Boone County White, heirloom corn finds new popularity. A Kentucky hilltop farmer makes it into corn chips, and a distillery has picked its first historical variety. 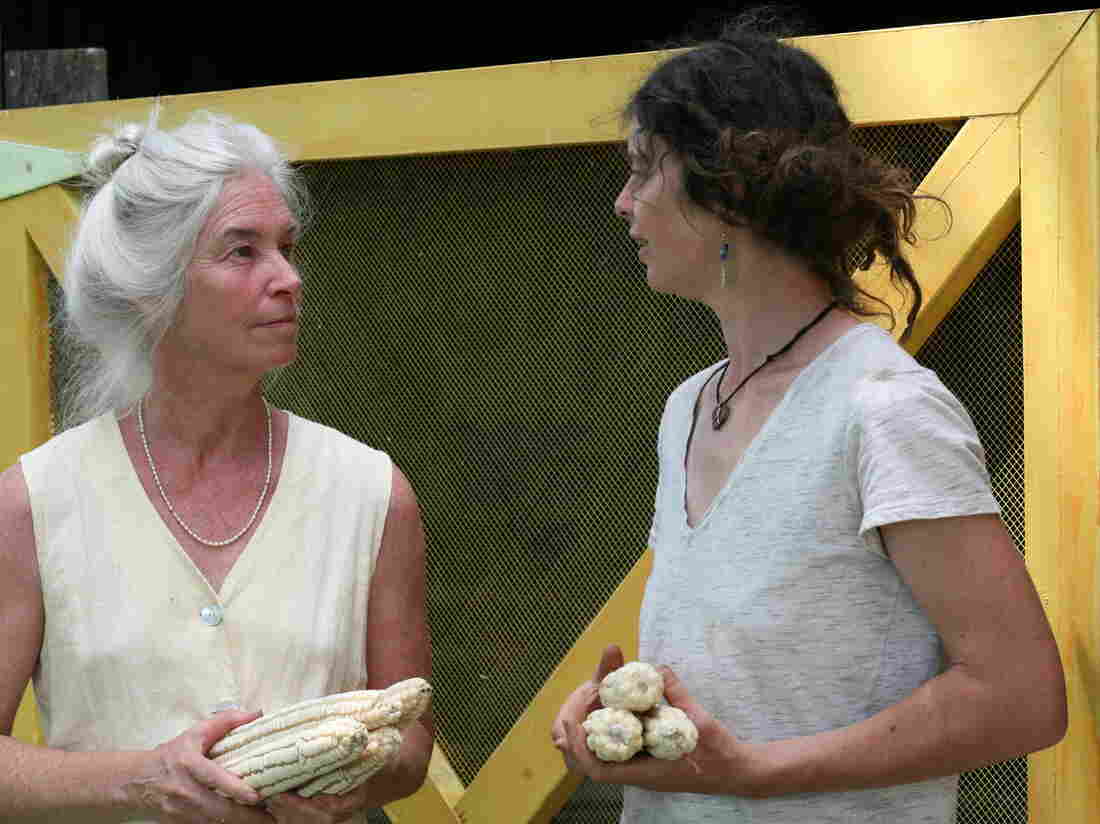 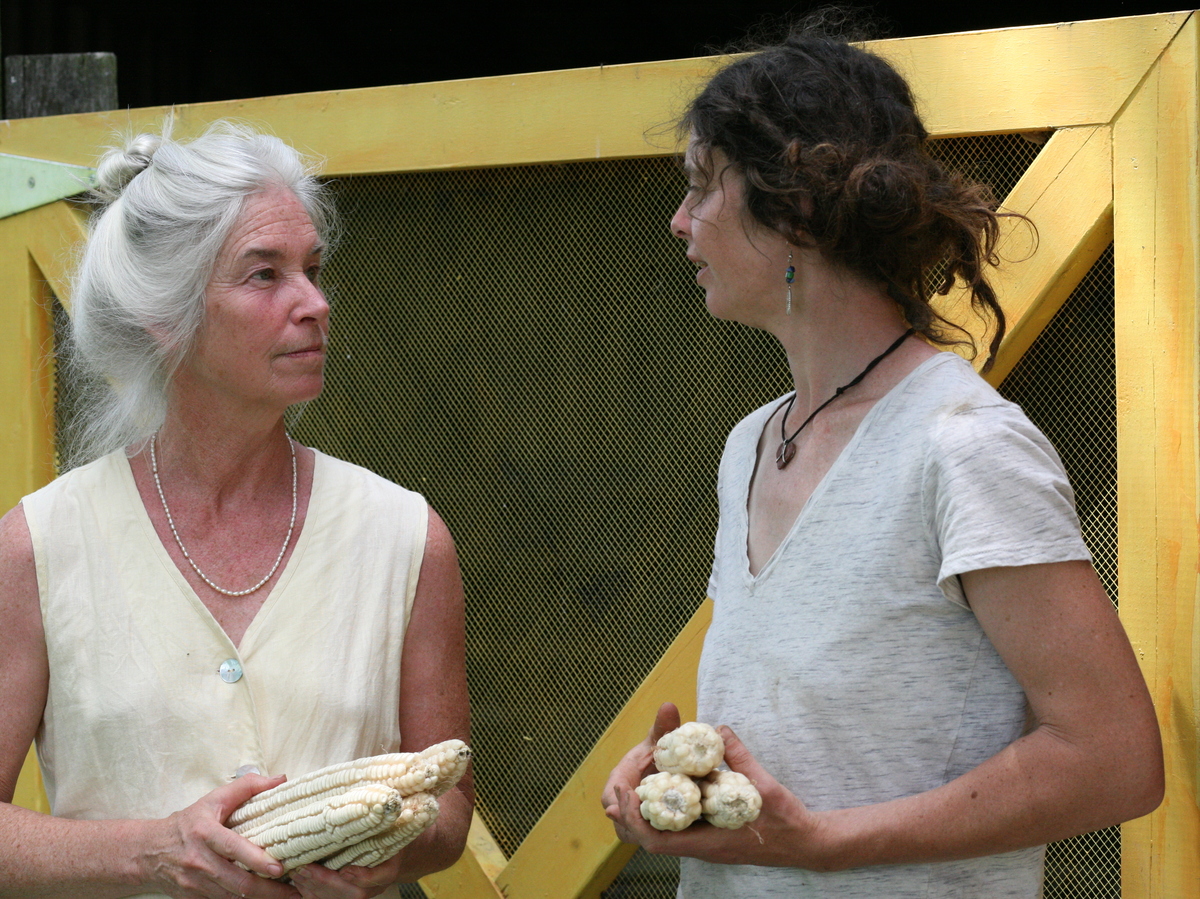 "Knee-high by the Fourth of July" is an old favorite saying, when you'd drive past a field of corn out in the country. And many of the old favorite varieties, called heirloom corn, have lots of new friends.

In recent years, seed companies have been reporting big sales numbers for these varieties. Baker Creek Heirloom Seeds in Missouri says sales are "skyrocketing" — a fitting verb for the fireworks holiday.

And in Kentucky, two projects are growing up around heirloom corn. One is a new adventure in bourbon distilling, and the other takes place on a hilltop farm in the northern part of the state.

I went to see Jennifer Gleason's small farm, and on the way I was thinking of some of the colorful heirloom names, such as Painted Mountain Corn, Bloody Butcher and Country Gentleman.

A longtime farmer, she's trying to raise enough food for her family, mostly fruits and vegetables. Fifteen years ago she decided to start growing a grain, and went looking for corn. She was introduced to Hickory King. 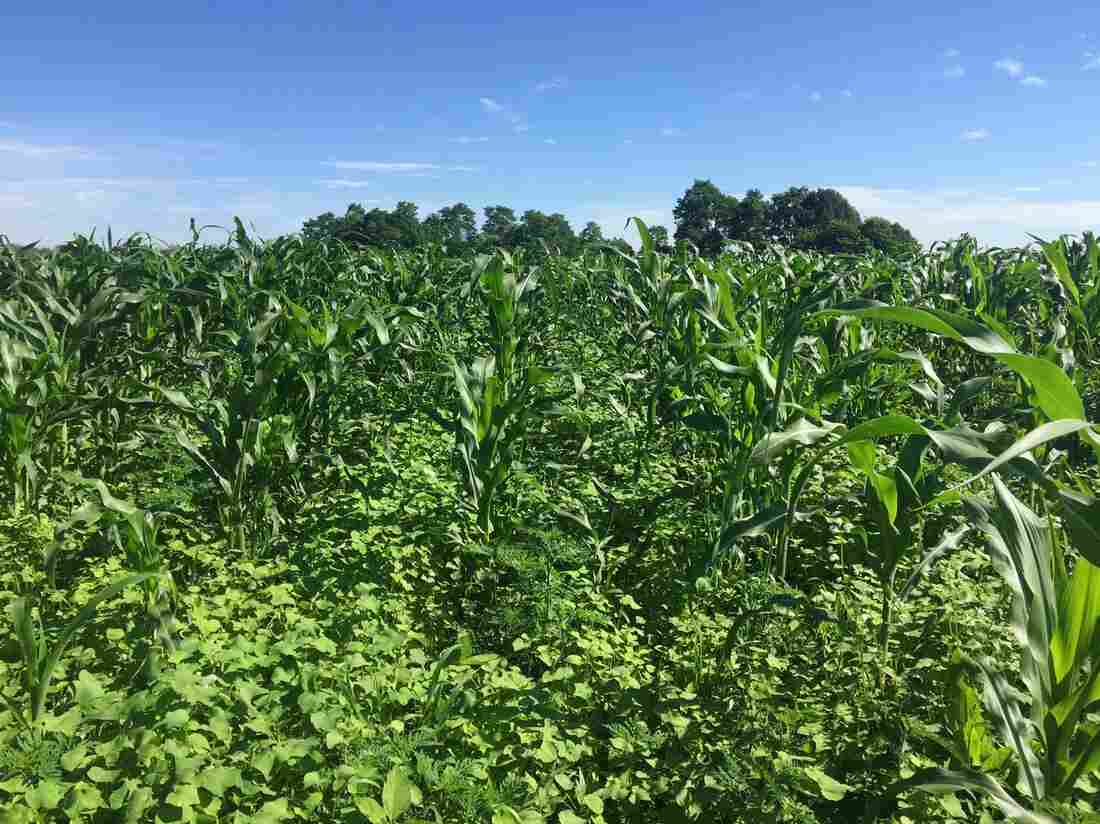 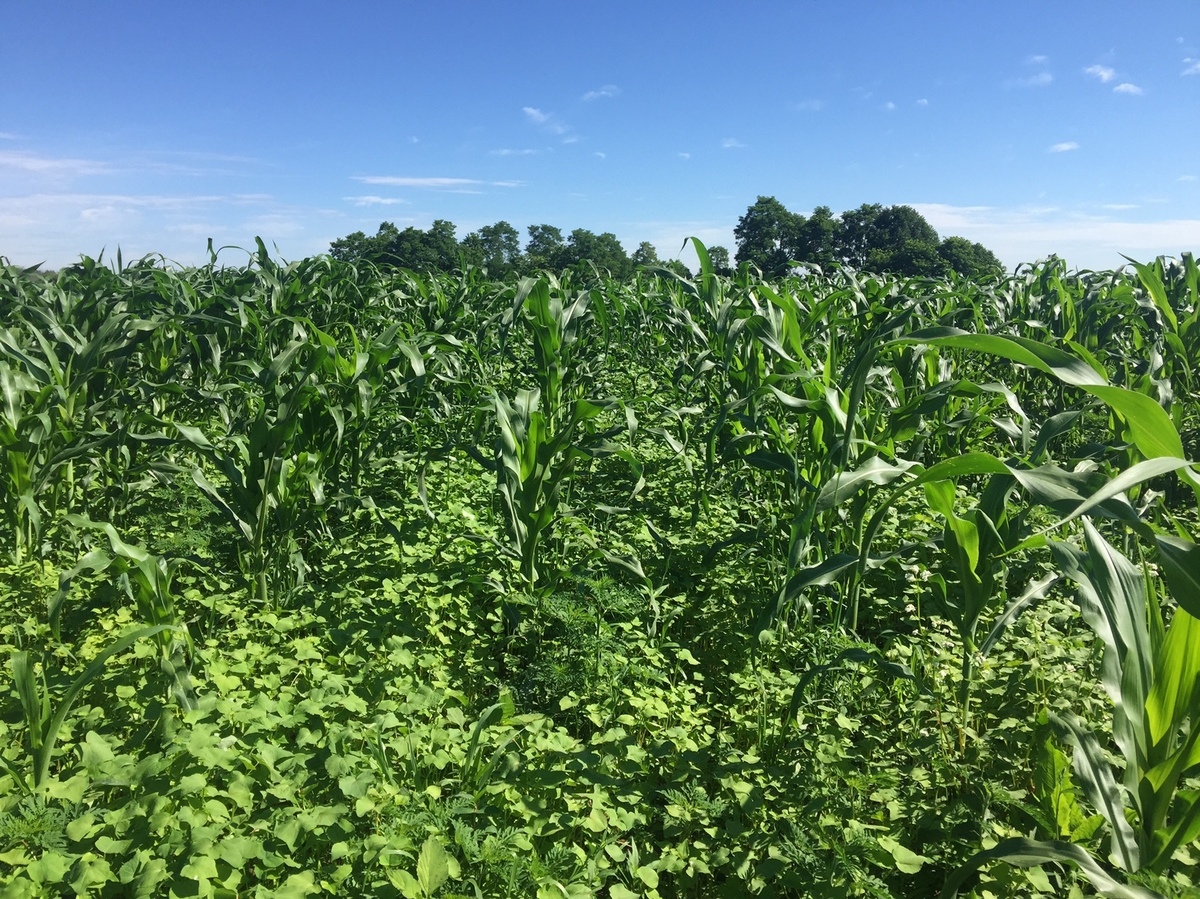 "I went to the local hardware store in downtown Maysville ... a really old-fashioned one where you had the seeds in bins that you shoveled out and weighed. And it was the only corn that wasn't pink. All the other corn was coated with a fungicide," she says.

Gleason now has a corn house where she works with a grain mill, grinding the Hickory King she brings in from the fields. For the home table she makes grits, hominy and corn bread.

Reviving An Heirloom Corn That Packs More Flavor And Nutrition

"With time I learned it was an open-pollinated heirloom variety best known for making great moonshine, making great hominy. Animals love it as fodder," she says.

Gleason's farm is now a tiny factory, called Sunflower Sundries. She makes and sells lot of soap, jars of jam, pickled asparagus, and the Hickory King line which now includes corn chips. They come in 12-ounce bags, which sell well in nearby counties and by mail order. Two local farmers help her grow enough of the corn.

I was pleased to hear Jennifer mention moonshine. Of course, that's how bourbon got started in the first place, with the Scots-Irish settlers in Appalachia growing corn, adding value by cooking it, distilling it, and transporting the liquor in barrels. And I'd heard that Buffalo Trace Distillery in Frankfort, alongside the Kentucky River, has an experimental project underway that uses heirloom corn. 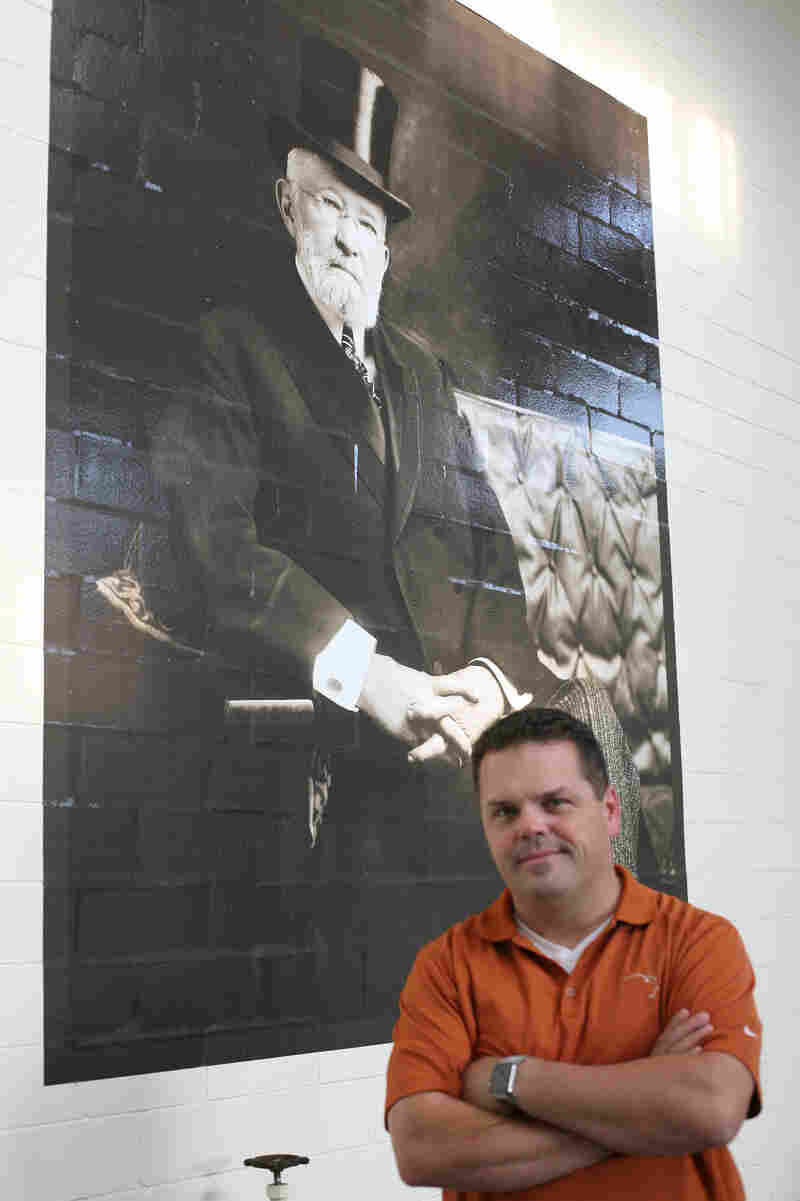 Master Distiller Harlen Wheatley stands below a portrait of E.H. Taylor, one of the founders of what is now the Buffalo Trace Distillery in Frankfort, Ky. Noah Adams/NPR hide caption 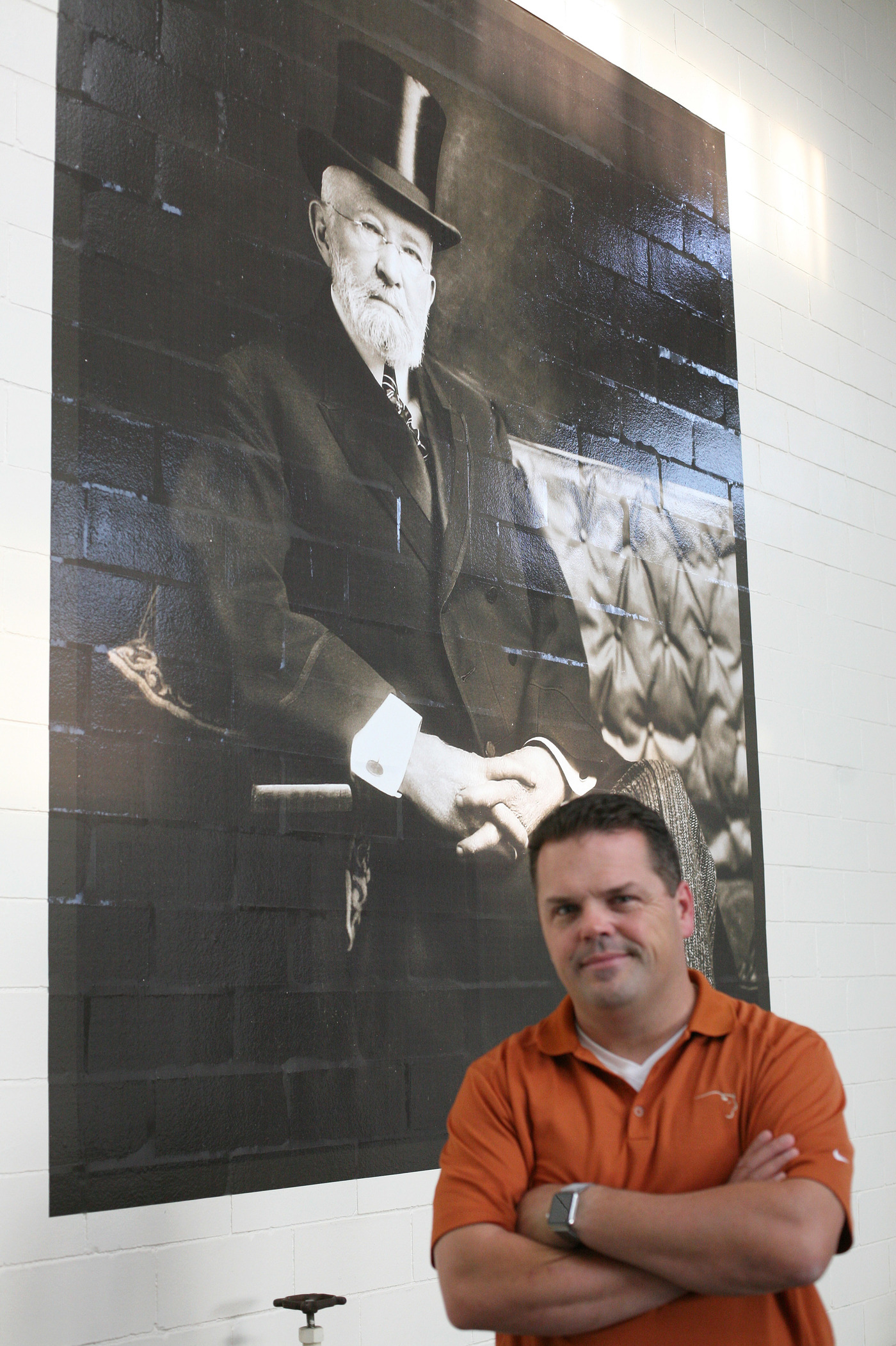 Master Distiller Harlen Wheatley stands below a portrait of E.H. Taylor, one of the founders of what is now the Buffalo Trace Distillery in Frankfort, Ky.

I went to meet Master Distiller Harlen Wheatley and we talked amid the noise and the steam and the sweet aroma of fermenting corn. Buffalo Trace plans to make bourbon from heirloom corn, using a different variety each year. On the morning I visited he was watching over the project's first selection, harvested last fall, called Boone County White.

"All the grain from the farm, we dried it in a silo and then we brought it in and ground it. It's been fermented about five days. We're going to still it today," Wheatley says.

The company has set aside 18 acres on a farm it's bought next door, making it easy to keep watch during the season.

"The stuff was 15 feet tall," Wheatley says. "Some of the ears were 24 inches long. We were pretty excited when we saw the ears, but the problem was there was only one or two per stalk."

Two ears on each stalk? That's about right for most corn — it was the 24-inch ear that impressed Wheatley.

As it turned out they had a good enough crop for 117 barrels of bourbon. Now it will take six years to age, the barrels stored away in a warehouse. No one can predict what it might end up tasting like, although the company has grand expectations. 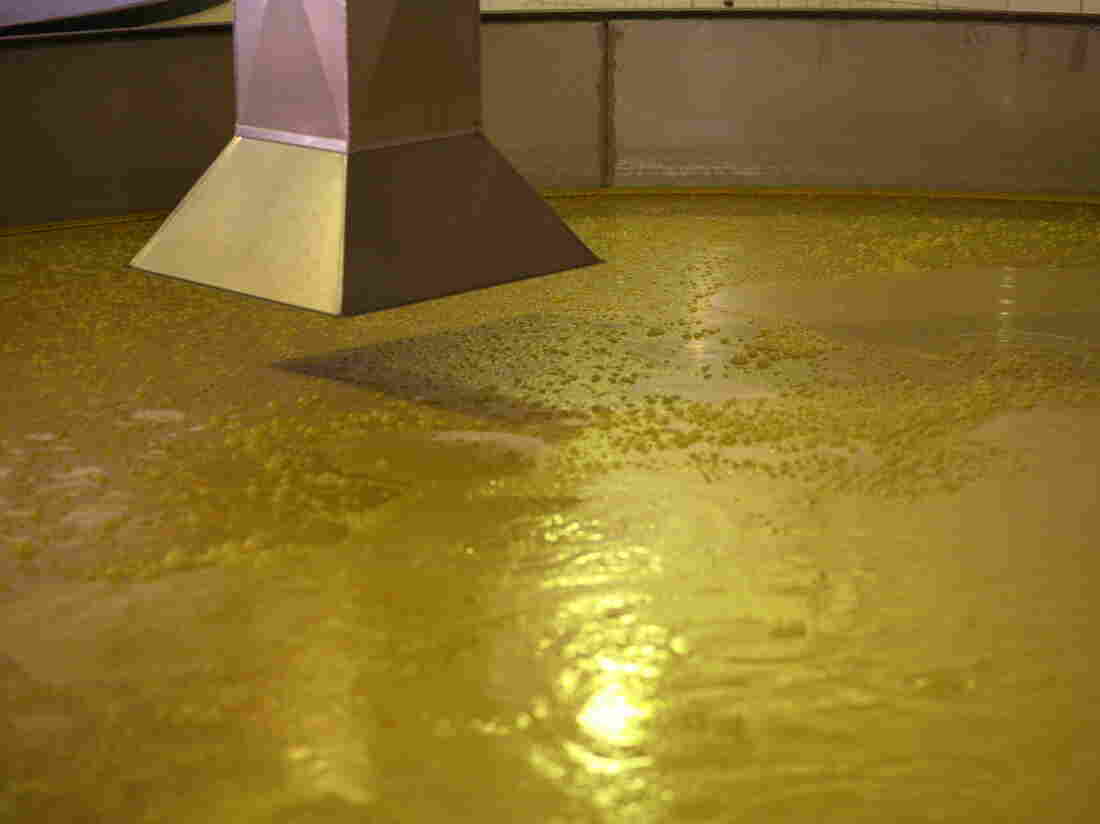 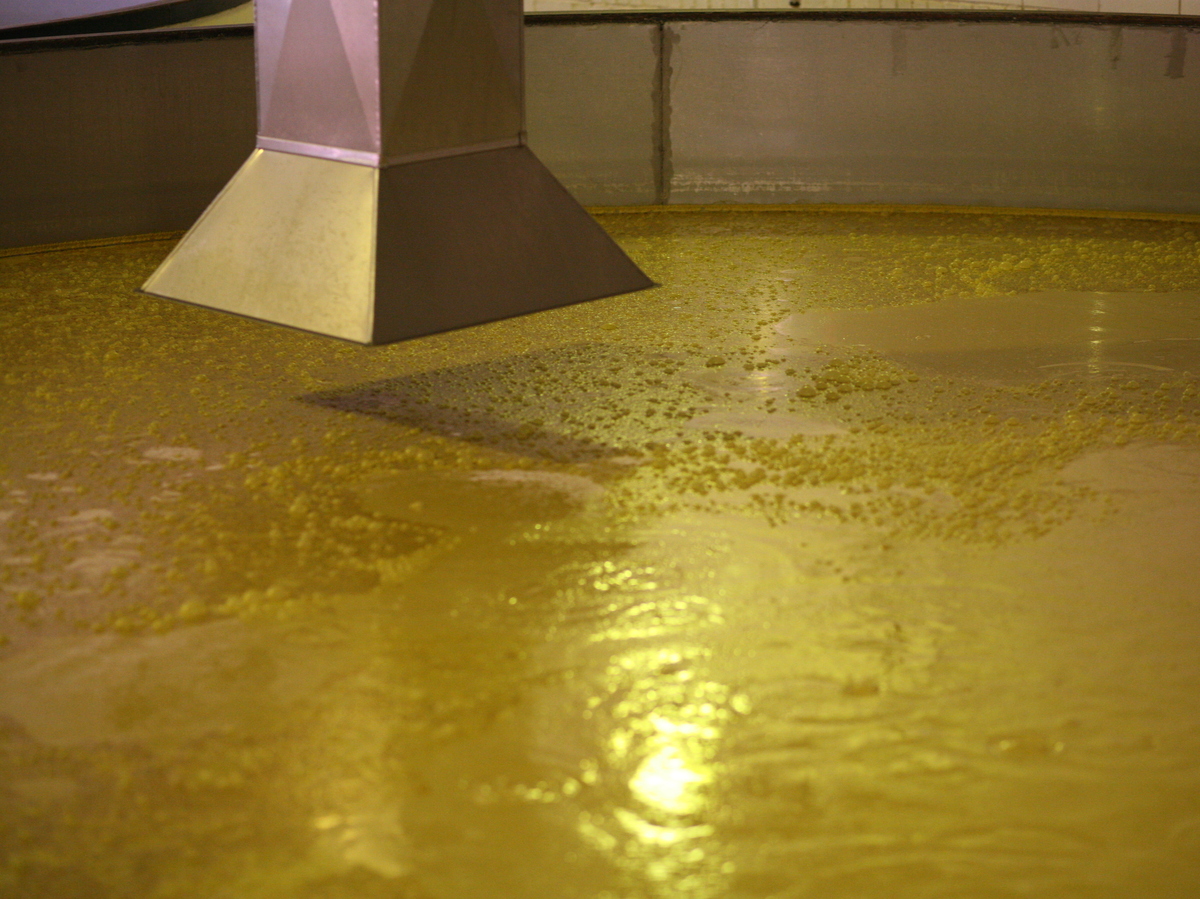 When the proper time comes there will be a taste test. Respectable whiskey writers will get together and sip and decide what's really in the heirloom corn barrel. The highest rated of all time? That's Pappy Van Winkle, namesake of the bourbon now produced by Buffalo Trace, scoring 95 out of 100 points.

Preske's department loves to send out stories about elegantly dressed gentlemen who once made fine whiskey. In this case — the choice of the heirloom variety factors in. Boone County White was said to be a favorite corn of E.H Taylor, who's often referred to as a "founding father" of the bourbon industry. Buffalo Trace can date its beginnings back to Taylor's distillery in the late 1800s. That's job satisfaction for Perske. "We like things that have good history behind them, because that's basically what marketing is about — it's telling good stories."

Taylor's new bourbon will be ready in 2022, followed in one year by heirloom crop No. 2 — Japonica Striped Corn, which did come from Japan, and has striped leaves, purple tassels, and burgundy kernels.

That corn — here on the Fourth of July — is reported to be 12 inches high.