Accessibility links
In The Queer Kitchen: 'Food That Takes Pleasure Seriously' : The Salt Writer John Birdsall firmly believes there is a queer aesthetic in modern food culture. He and other LGBT chefs discuss the role of sexual identity and race in the kitchen. 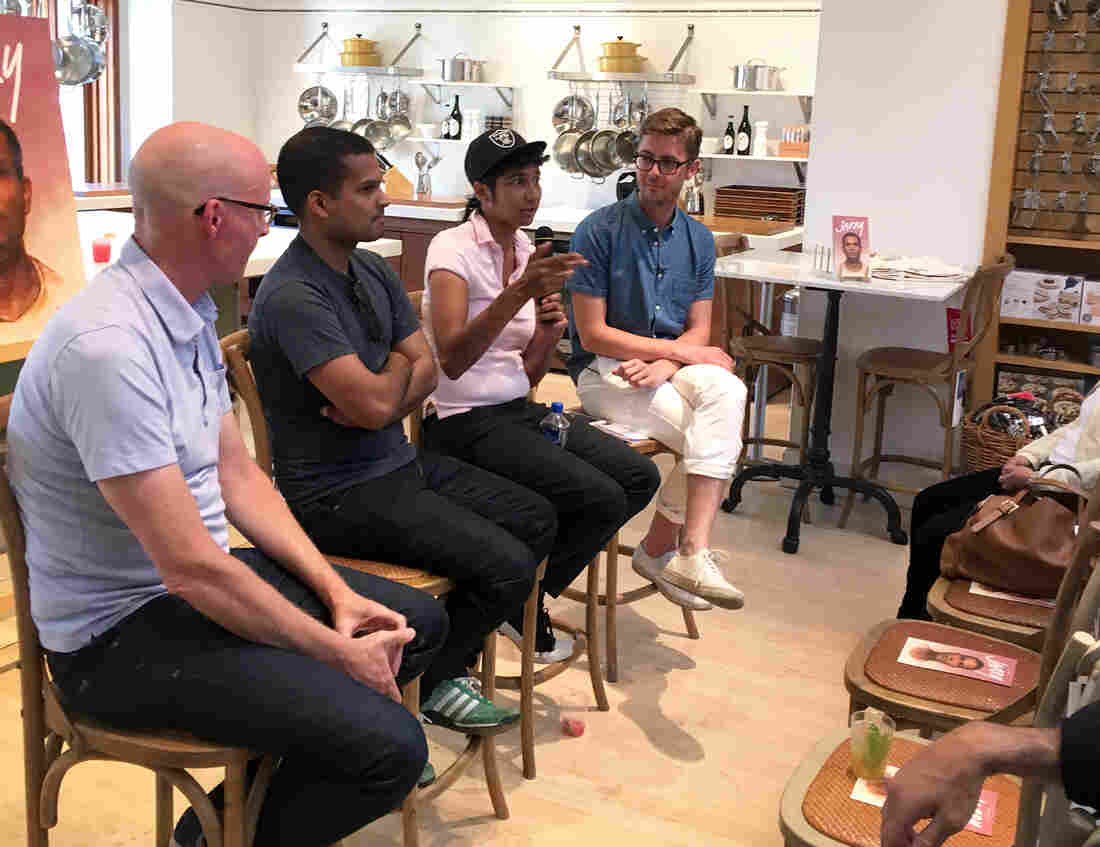 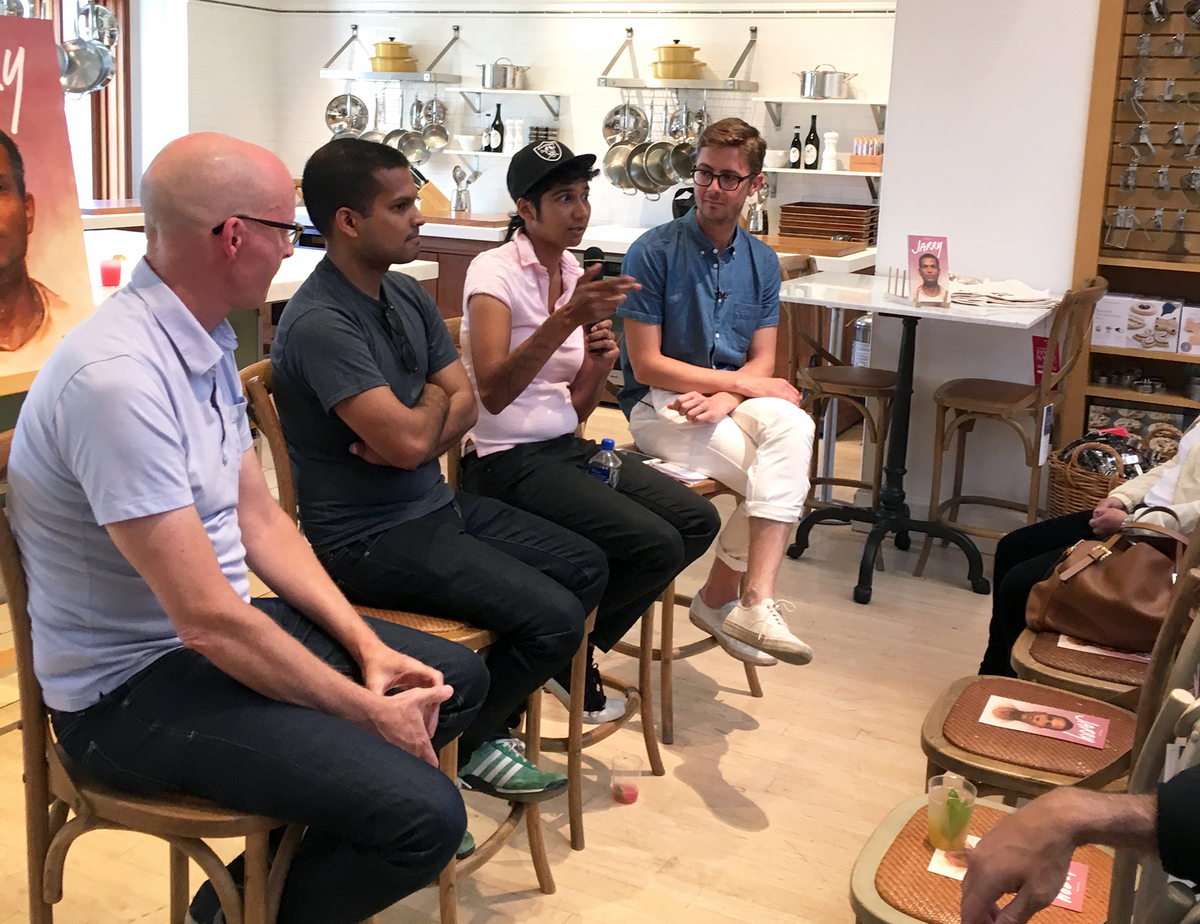 Writer John Birdsall (from left), photographer Nik Sharma, restaurateur and chef Preeti Mistry talk about the concept of the "queer kitchen" with Lukas Volger, the editor of Jarry, a gay men's food magazine.

What is a queer kitchen? Is there a recognizable queer style or sensibility that can be expressed through food?

These questions and more were at the heart of a recent conversation hosted at the Williams Sonoma flagship store in San Francisco's Union Square during the city's Pride Weekend. The gathering was organized by the New York-based gay men's food magazine, Jarry, a twice-yearly print publication launched last fall.

Writer and former chef John Birdsall firmly believes there is a queer aesthetic in modern food culture, rooted in the work of three great American food writers: James Beard, the longtime New York Times food critic Craig Claiborne, and expat Richard Olney, whose cookbooks helped introduce Americans to the joys of French cuisine. The sensibilities of this trifecta of closeted gay men had far-reaching influence, changing the way Americans cooked and ate. As Birdsall has written, "It's food that takes pleasure seriously, as an end in itself, an assertion of politics or a human birthright, the product of culture — this is the legacy of gay food writers who shaped modern American food."

It's a legacy that Birdsall thinks more people — especially straight chefs — should acknowledge.

"I love Lucky Peach [magazine]," said Birdsall. "But the first couple of issues were really reflective of that male, straight, bro-y chef culture." It was this narrowly macho focus that led Birdsall to set the record not-so-straight with America, Your Food Is So Gay, his Lucky Peach essay that won a James Beard Journalism Award in 2014. Birdsall, now 56, remembers he and a boyfriend reading aloud from Olney's writings, feeling like they were getting a glimpse of a secret gay world — one that was, by necessity, elusive. It was a world both coolly cerebral yet infused with the sensuality of Olney's adopted home in the south of France, its brilliant light, its hillsides of thyme and lavender.

By the 1990s, a culture that was once coded and discrete had exploded into we're here, we're queer, get used to it — especially in San Francisco. When Preeti Mistry, co-owner and head chef of Oakland's Juhu Beach Club, first came to San Francisco in 1996, she encountered lesbian chefs like Elizabeth Falkner, Traci Des Jardins and Elka Gilmore, who were putting their stamp on the evolving California cuisine of the time. Mistry, who originally wanted to be a filmmaker, was inspired by these chefs' creativity and fearlessness, so much so that she left a job in the "gay bubble" of Frameline to start training in fine dining at Claridge's in London.

"These women were my heroes," she said. It wasn't just that these women were out, at a time when restaurant kitchens could still be tough places for women, gay or straight. It was that they were changing the game, on and off the plate. 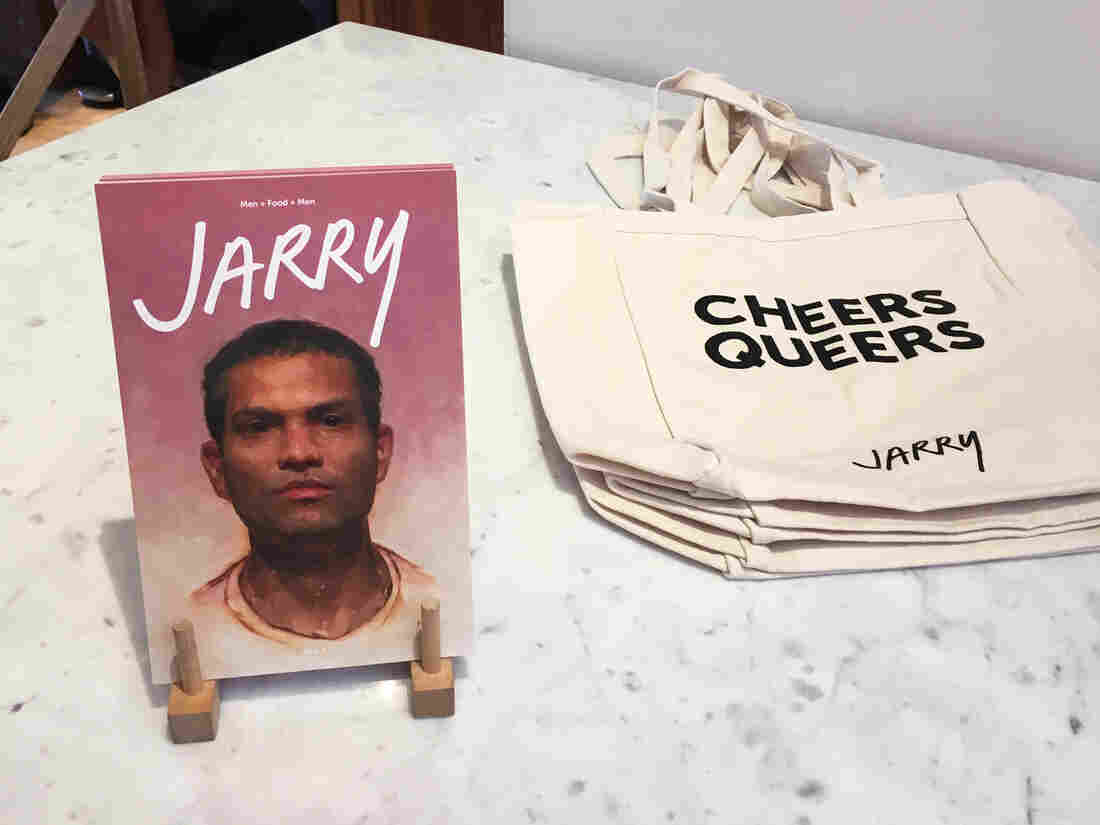 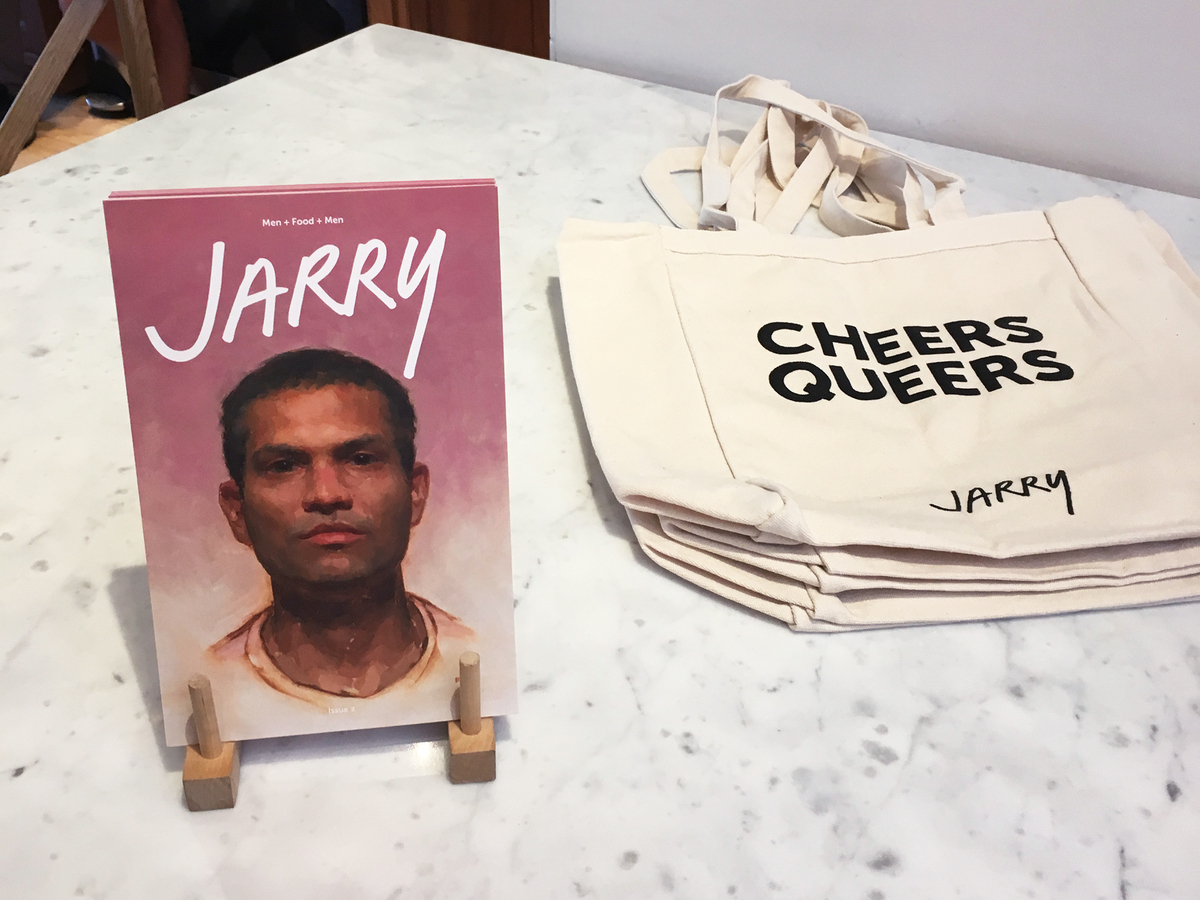 A copy of Jarry, a gay men's food magazine, next to tote bags that read "Cheers Queers."

"At Citizen Cake, Elizabeth changed the presentation of pastry," said Mistry. Falkner's cakes were architectural, pierced with sugar shards, piled with kitschy frosting, shag-carpet deep. They were disruptive, deconstructed, even a little bit dangerous. (It's no surprise that Falkner's first cookbook, written in the form of a comic book, was titled Demolition Desserts.) Mistry remembers a dinner with Jim Dodge, then a well-known pastry chef trained in a more classical style. "When Elizabeth's dessert came out, he said, 'What is this crap?' " It was a clash of sensibilities, his gay, hers queer.

Nik Sharma of the blog A Brown Table was a pharmaceutical researcher before becoming a photographer specializing in food. The youngest of the group, he says coming out wasn't an issue, but finding a gay social circle when he first started medical school wasn't easy. A chat with a gay professor led to an invitation to the med school's "secret gay potluck" — secret not out of fear, but simply because "they didn't want any straights to come," said Sharma.

Sharma, like Mistry, is of Indian heritage. He says calling out his brownness in the title of his blog — and often photographing his own hands as he makes pastry or squeezes oranges — was a deliberate choice. It is, he says, a way to make visual space for his immigrant perspective and culture within a blogging world that was overwhelmingly white and female. His work has paid off: He has a new column, A Brown Kitchen, in the San Francisco Chronicle, and his blog has won numerous awards for photography.

Birdsall, who won a second James Beard Award for Straight Up Passing — an article about gay chefs in Jarry's first issue — sees queer cooking as an act of anti-normative transgression and resistance. It's not a concept that all the chefs he spoke to agreed with. In fact, several high-profile, out chefs bristled at being categorized as "gay chefs," much in the way that many artists resist being defined as "women writers" or "female musicians." These chefs, he says, felt that their sexuality had nothing to do with how they cooked. Or was it just that these chefs — white and cisgender, as Mistry points out — still feared the repercussions of embracing a higher-profile gay identity, even in these more equal times?

Birdsall feels that the transgressive spirit of the queer kitchen can be adopted even by non-LGBT chefs. He points to Danny Bowien's boundary-breaking cooking at Mission Chinese Food, where idiosyncratic, cross-cultural flavor bombs like chorizo-stuffed chicken (inspired by a Filipino recipe) loop around Sichuan cuisine. Looking further back in history, there's the work of Jeremiah Tower (who was mentored by both Beard and Olney), who played a critical role in shaping California cuisine in the 1980s. Birdsall sees Tower's cooking as "a repudiation of the more formal cuisine that came before, as an expression of intense pleasurability."

As for her own aesthetic in the kitchen, Mistry says, "I'm not interested in forcing something that's not natural, in over-manipulation" of ingredients or presentation. "We're not distilling things; it's fire and food and spices." And while plating matters to her("It's not a trough!"), she doesn't see the need to torture her food with stylists' tweezers, either. More important to Mistry is creating a workplace, and a dining room, that's diverse and welcoming in ways that restaurants haven't always been, both for diners and employees. The vulgar humor that's long been seen as a staple in restaurant kitchens has no place in hers. "We make jokes and laugh all day long," said Mistry, but her employees learn fast that dumb anatomical jokes won't fly. "We just shame and humiliate them if they try. Like, 'That's the best you come up with? Really?' " Mistry said. "They have to work harder than that."

As a butch woman of color, Mistry has experienced firsthand the stark contrast between how she and her wife, Juhu Beach Club co-owner Ann Nadeau, are treated in restaurants when they are and aren't recognized. If she's recognized from her stint on TV's Top Chef and Anthony Bourdain's Parts Unknown food and travel show, they get the industry hotshot treatment. If not, they've been ignored by bartenders and slighted by hostesses. Part of running her own restaurant is the freedom to speak out for causes and issues she and Nadeau feel strongly about. "When Alicia Garza, a co-founder of the Black Lives Matter movement, comes in, we treat her like a rock star," Mistry said.

"The tides are changing, both in race and gender," Mistry said. "People are used to seeing brown people in the kitchen. We'd like to have an equal diversity in the front of the house."

Stephanie Rosenbaum Klassen is a food writer based in the San Francisco Bay area. A version of this story first appeared on KQED's Bay Area Bites.