Accessibility links
A Nonprofit Grocer Tries To Sell More Healthful Food Without Going Under : The Salt For 12 years, Chester, Pa., had no supermarket. Then Fare & Square came to town. But getting people to eat better — while also becoming a sustainable business model — is a tall order. 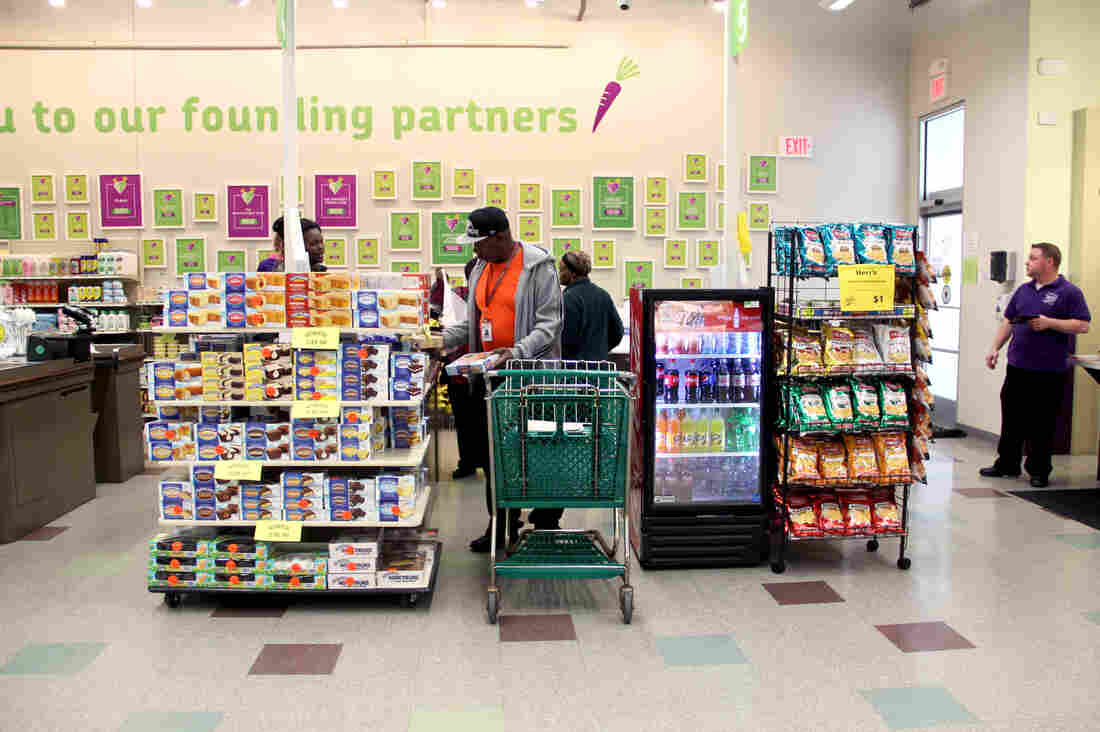 The wall behind the registers at Fare & Square is covered with plaques honoring generous donors. Emma Lee/WHYY hide caption 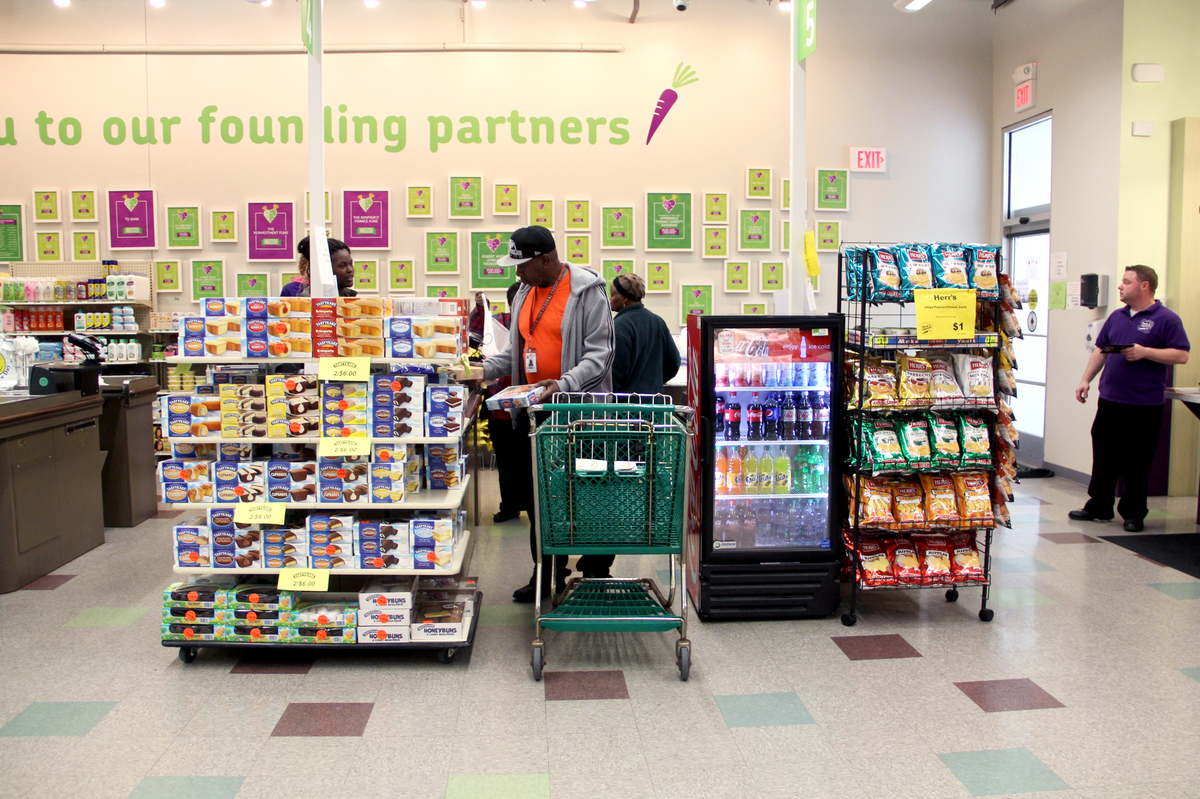 The wall behind the registers at Fare & Square is covered with plaques honoring generous donors.

For 12 years, Chester, Pa., had no supermarket. In an effort to end this so-called food desert, a local food bank plunked down a nonprofit grocery store in the impoverished Delaware County city in October 2013.

Area food bank Philabundance opened the new store, called Fare & Square, in the same footprint as a former supermarket at the corner of Trainer and 9th streets.

When it opened, the store was touted as a philanthropic venture and a boon to Chester, a city of about 34,000. A third of the population lives below the poverty level.

After raising $7 million in startup funds through grants, donations and loans, Fare & Square launched with a two-pronged mission: become a sustainable business and make people in Chester healthier.

But when Fare & Square first opened its doors, a lot of the stock wasn't winning over customers. 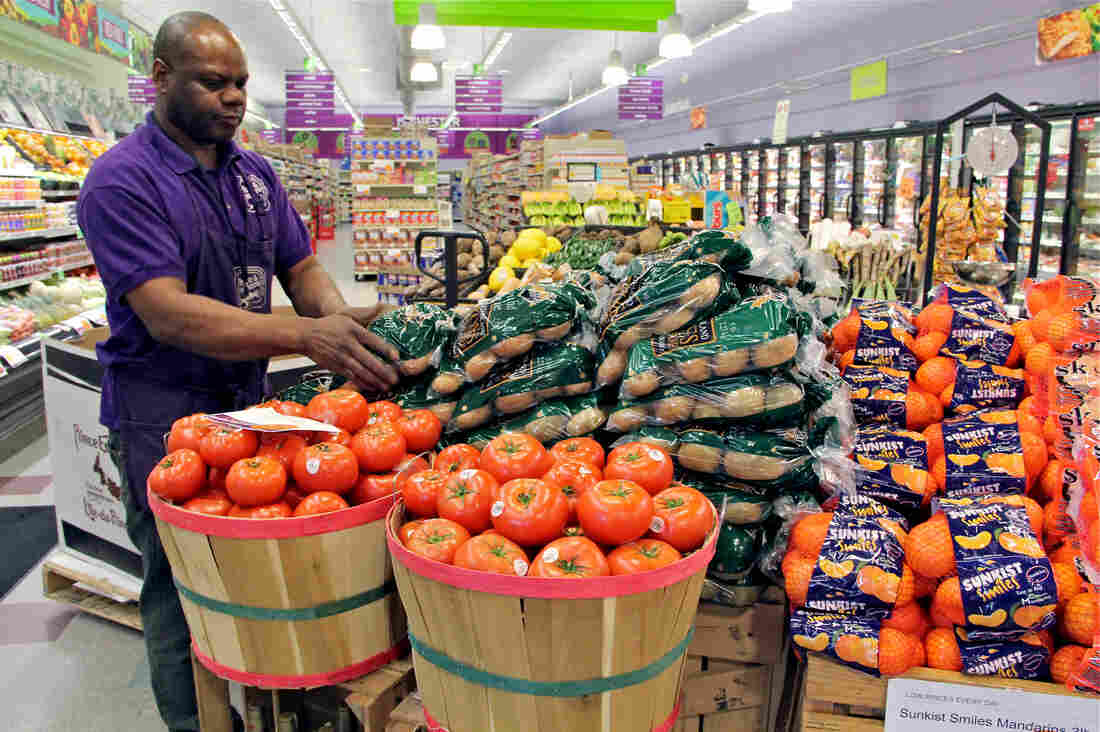 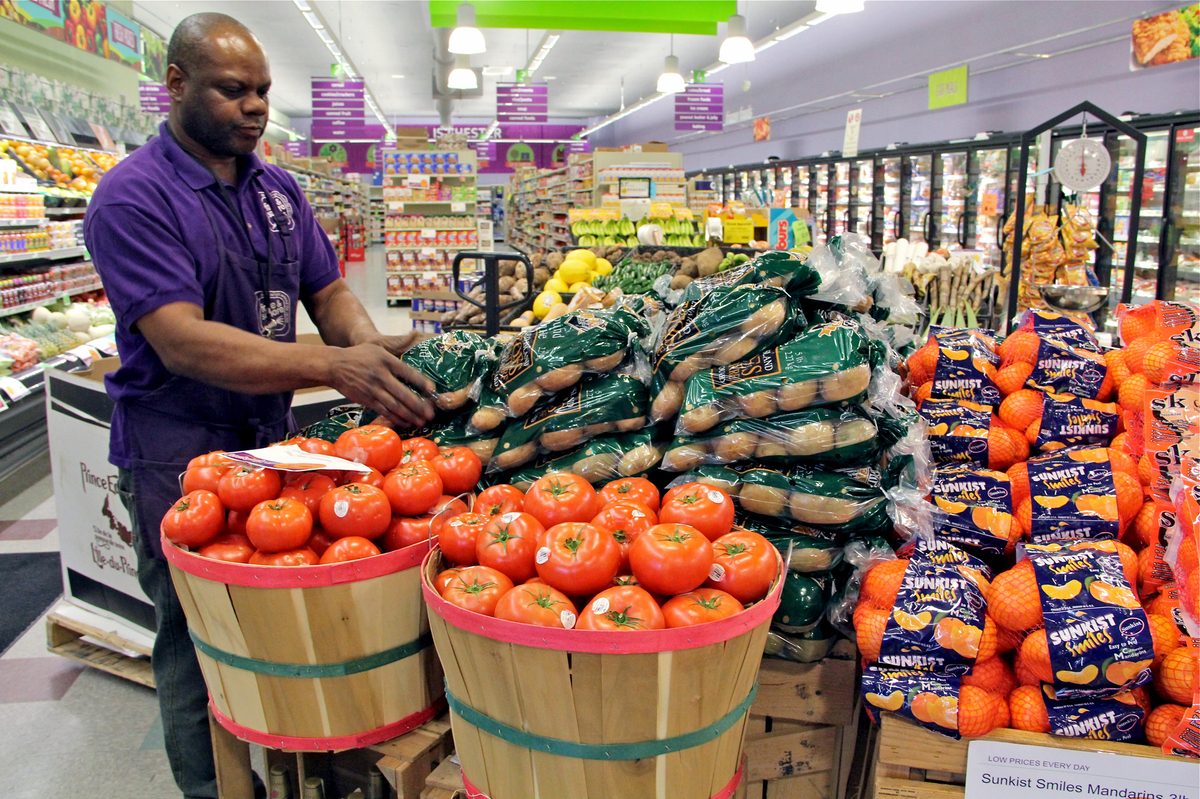 On first glance, Fare & Square is intentionally laid out like an upscale grocery store, with produce front and center.

"Our model is, we want to have all kinds of healthy stuff, so when people walk in they're like, 'Wow, what's all this?' " says operations manager Mike Basher.

But the store also wants people to see what they're used to seeing in grocers — and that includes processed and junk food. TastyKake displays line the checkout aisles. Cases of soda lurk below eye level, behind displays of fruits and vegetables.

The supermarket business is notoriously tough: razor-thin margins on a product that can quite literally rot on the shelves if it doesn't sell. Big chains rely on high volume to get the lowest prices on what they sell, and the returns from a successful store may prop up new or underperforming locations. A one-off grocer has neither advantage.

Those chains also average profit margins of only 1 or 2 percent and generally take three to five years to get back into the black.

To get and keep customers, Basher and his crew started tinkering with what they carried. They cleared products that weren't selling from the shelves and replaced them with goods customers asked for, like Caribbean and Latin American food.

On a recent visit, a lot of people in Fare & Square's checkout line were buying packaged foods and fresh foods together. Sales have grown year over year, but Fare & Square needs to take in 20 percent more to break even. For now, it it is subsidized by Philabundance.

Fare & Square has been experimenting with incentives to get customers to spend more of their food dollars on healthful and fresh food by lowering the cost of things like produce.

Customers who self-declare as living on less than 200 percent of the poverty level receive 7 percent back on all of their all purchases through a program called Carrot Cash — but they get back more for each dollar they spend on fruits and vegetables. 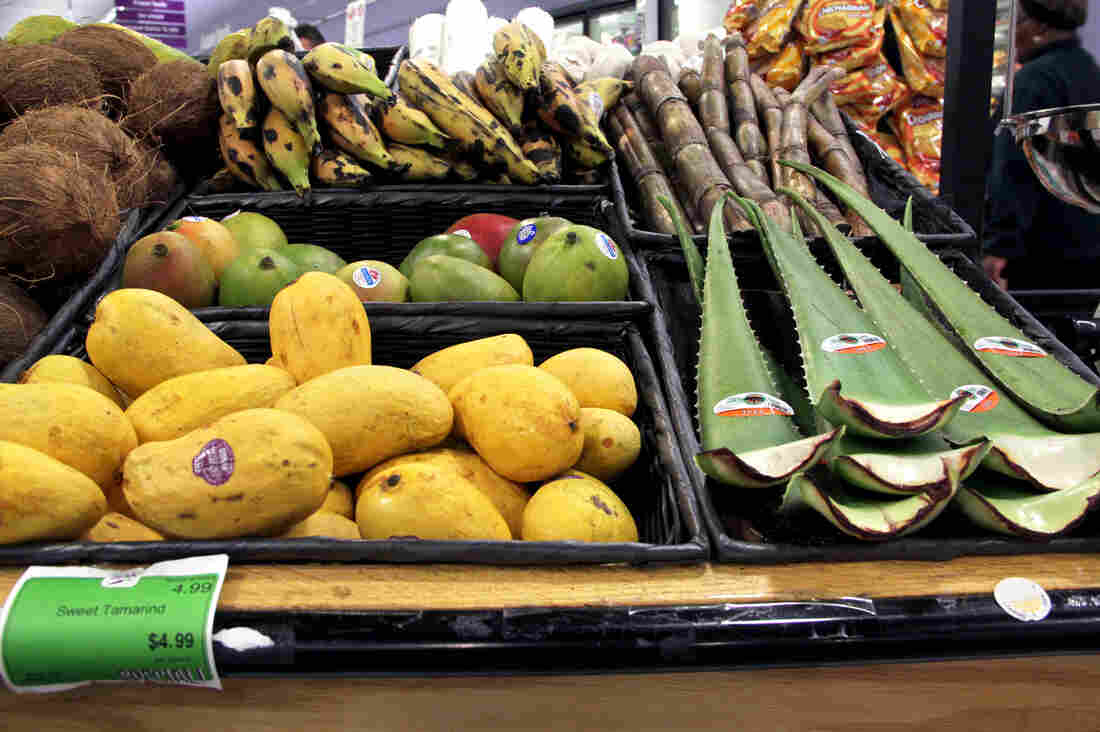 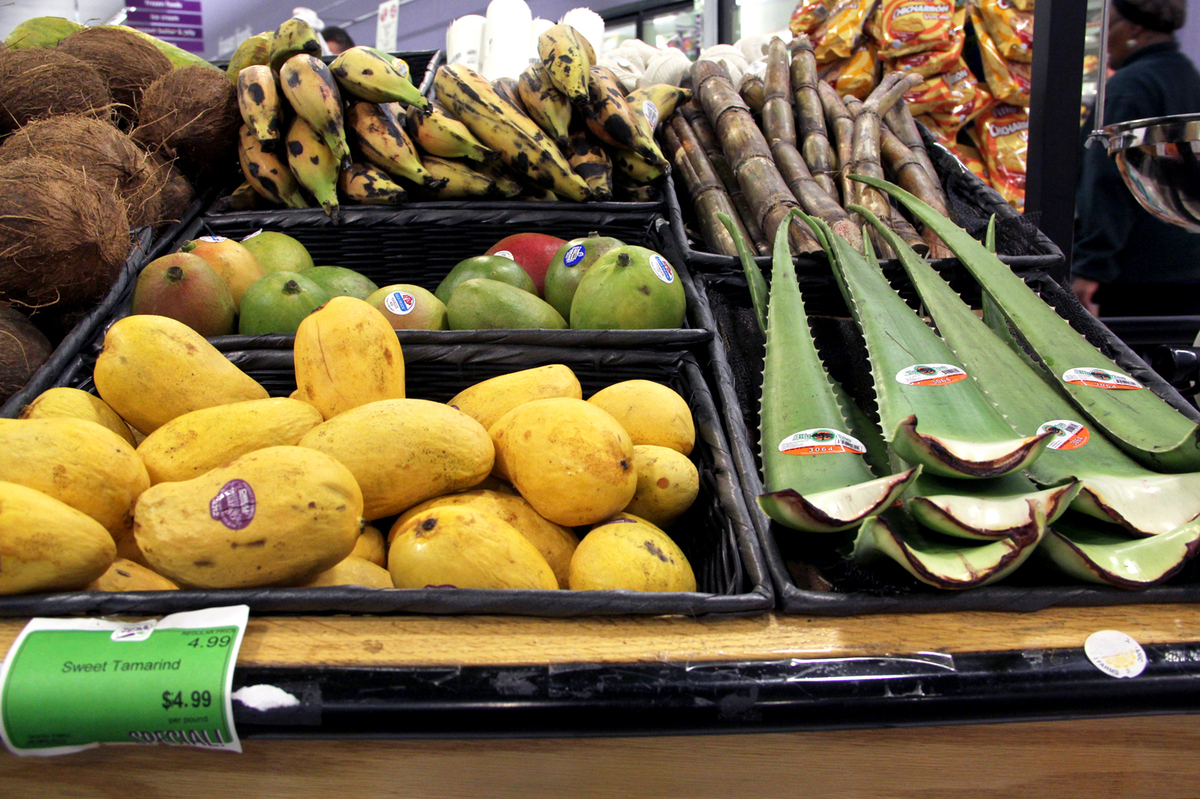 Anne Palmer, a food researcher at Johns Hopkins University, says research into food deserts shows that just because more healthful food is on shelves doesn't guarantee customers will buy it.

"If you're on a budget, you're not purchasing food with the intent of improving your health. You're purchasing food to satisfy hunger," she says. "You make choices you can afford on things you know your family will eat."

Food that is unfamiliar or difficult to make therefore constitutes a risk: If your family doesn't eat it, that's money down the drain. At the same time, restricting what people can buy to only healthful food is unrealistic, says Palmer.

"We have to recognize everybody wants a wide range of foods. ... [Packaged goods] might be what it takes to bring people in, recognizing that if you don't do that, they're going to go somewhere for that food," she says.

The relationship between incentives like Carrot Cash and more healthful eating hasn't been studied long enough to determine whether there is a link, according to Palmer. Researchers at Swarthmore College did conduct a field study at Fare & Square, pending publication, that showed giving customers a coupon for produce led them to spend more total food dollars on fresh food, whereas receiving a coupon for any food in the store did not.

Employees at Fare & Square say one of the company's goals for the next year is to use more of its customer-level data to learn more about how promotions and incentives affect healthy eating habits.

No matter what they're buying, people shopping in the store say they are grateful to have an affordable option in Chester.

When asked how often they shop at Fare & Square, Chris and Kyisha Smith, a young married couple perusing the meat case, answer in unison: "Every week."

"They got everything, chicken, steak. ... They the best though, I ain't even gonna lie to you," says Chris Smith.

In recent years, Chester has seen both a deep-discount grocer and a members-only food co-op come and go. The folks behind Fare & Square hope they've found a sweet spot that is viable, somewhere in the middle.

An earlier version of this post incorrectly referred to Swarthmore College as Swarthmore University.