Accessibility links
As Bagged Salad Kits Boom, Americans Eat More Greens : The Salt Americans buy twice as many packages of bagged salad greens as heads of lettuce these days. Is the bagged stuff just as good? If it gets you to eat more leafy greens, yes. 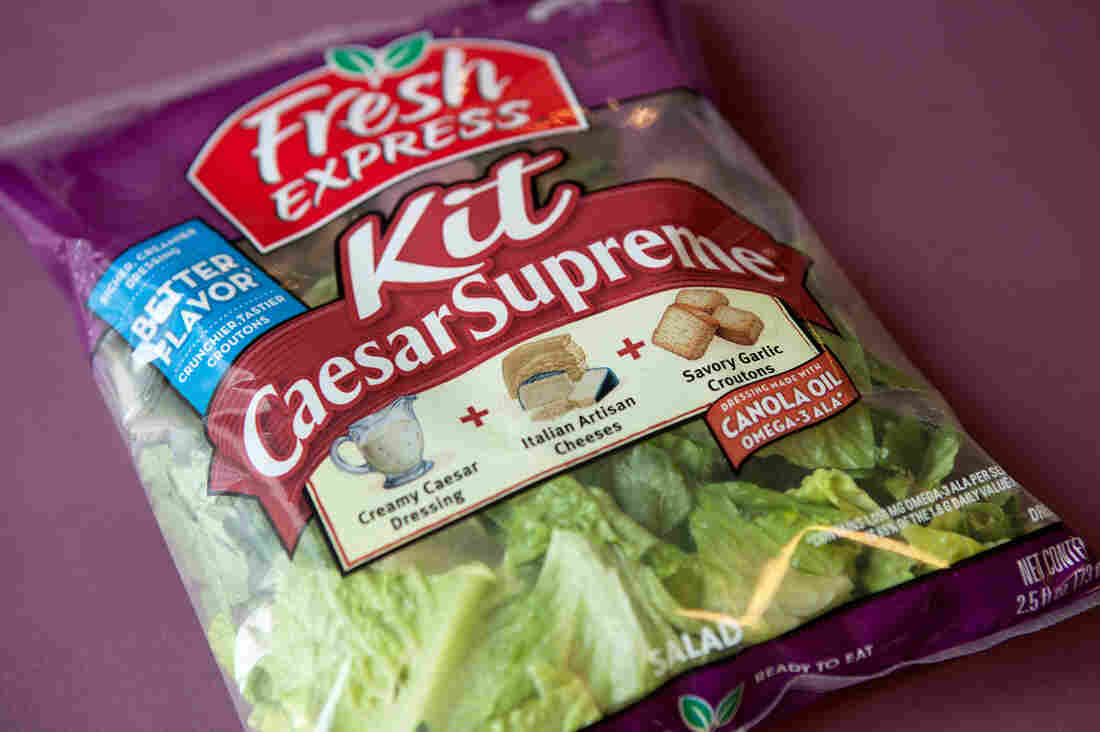 A Caesar salad kit. Americans buy twice as many packages of bagged salad greens as heads of lettuce these days. Is the bagged stuff just as good? If it gets you to eat more leafy greens, yes. Morgan McCloy/NPR hide caption 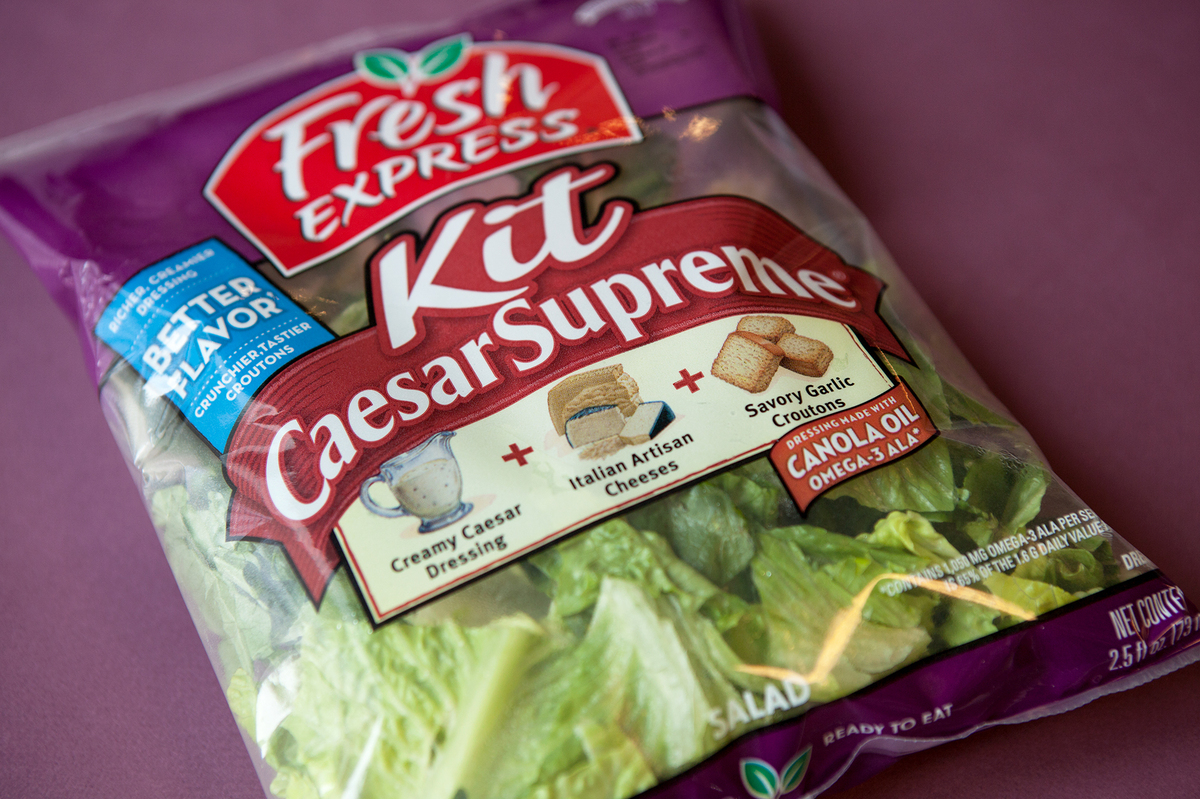 A Caesar salad kit. Americans buy twice as many packages of bagged salad greens as heads of lettuce these days. Is the bagged stuff just as good? If it gets you to eat more leafy greens, yes.

Cleaning a freshly picked head of lettuce can be an act of mindfulness, your worries melting away as you wash and tear each leaf. And the payoff, along with the beautiful summer salad, is a feeling of virtuous accomplishment.

But if you're a busy working parent, the rip-and-release salad kit in a bag can take some hassle out of dinner prep.

As a culture, it's clear which direction we're headed. Per capita sales of fresh iceberg lettuce have fallen by half over the past 25 years, but there's been a boom in bagged greens and salad kits, sales of which are projected to reach $7 billion a year.

According to the Nielsen Perishables Group, which tracks such things, Americans bought twice as many bags of packaged salads as heads of lettuce last year. And over the past five years, sales of bagged lettuce have been increasing by 6.5 percent every year. Sales of intact lettuce heads have remained flat.

Now, if you're like us, you may have some hesitation about grab-and-go salads. Do bagged greens lose freshness? Are they less nutritious or less safe? Or are these suspicions simply the result of old-fashioned prejudice?

We decided to find some answers.

Let's start with safety. Though you may remember food-borne illness outbreaks linked to bagged greens, the risk is actually quite low, and apparently no higher than from traditional wash-at-home lettuce heads.

Big processors triple wash their greens and have taken aggressive steps to reduce the risk of pathogens on their farms, testing irrigation water and trying to prevent wildlife from entering fields, since birds and rodents can carry disease-causing microbes. Some of these measures were put into place following an E. coli outbreak linked to bagged spinach a decade ago.

Food safety expert Trevor Suslow, from the University of California, Davis, told us in an email that "detectable contamination in both whole head lettuce and mixed salad greens categories are very very low, typically less than 0.1% positives [for pathogen detection]," and that there's little evidence that bagged lettuces carry any more or less pathogen risk compared with heads.

In terms of freshness, it's fair to say that chopping and shredding can lead to browning and wilting.

But large producers — such as Fresh Express, Taylor Farms and Earthbound Farms — process and ship their products to retail grocery chains and food service outlets with pretty impressive efficiency.

"For major supply chains, lettuce and leafy greens are harvested, cooled, and shipped within 24 [hours] or only slightly longer," explains Suslow.

The bagged greens also benefit from a crucial technological innovation, called "modified atmosphere packaging." Essentially, the plastic packaging is engineered in such a way that it "breathes" but also maintains an atmosphere inside the package that will minimize browning and spoilage. Typically, that means a lower level of oxygen, and more carbon dioxide, than the natural atmosphere.

Now, when it comes to nutrition, opinions are easier to come by than facts. Intuitively, it seems there must be something lost in an industrial-scale packaging facility. After all, the greens are typically rinsed in chlorinated water.

But one published study we found concluded that bagged, fresh-cut spinach in those modified-atmosphere packages maintained lots of its nutrients, including concentrations of vitamin C and other beneficial compounds known as flavonoids. The researchers did, however, point to a decline in antioxidants during storage.

Decades ago, head lettuce — widely recognized as iceberg — and Romaine were the most common options. But these two greens are not nearly as nutrient-dense as the mixes of dark, leafy greens that are now widely available — yes, in bags.

Just yesterday, we picked up a $5 clamshell of Earthbound Farm's Herb Blend, which includes varieties of lettuces such as Lolla Rosa and Asian Mizuna that we might otherwise never eat.

The clamshells also pack in arugula, spinach, chard and other dark greens that can serve up a whole day's worth of vitamins A and K in a big salad. (There's also lots of vitamin C, as well as dietary minerals such as magnesium and potassium that we're told to consume more of.)

And here's the kicker. It's reasonable to conclude that the convenience and availability of bagged salad kits has nudged Americans to consume more.

Consider this: Since 1985, our consumption of leaf and Romaine lettuce has more than tripled (from about 3 pounds per person per year, to more than 11 pounds per person), according to data from the U.S. Department of Agriculture.

Considering that eight in 10 Americans don't currently eat the recommended levels of vegetables, this has to be a good thing.