Accessibility links
Neanderthal Dinner: Reindeer With A Side Of Cannibalism : The Salt Neanderthal remains in a Belgian cave offer more evidence that our close relatives sometimes ate one another. But other sites show no evidence of cannibalism, giving archaeologists a lot to chew on.

The highly fragmented Neanderthal bone collection from the Troisième caverne of Goyet. The bones belonged to at least five individuals. Those with an asterisk were directly dated to 40,500–45,500 years ago. Scale = 3 cm. Royal Belgian Institute of Natural Sciences hide caption

The highly fragmented Neanderthal bone collection from the Troisième caverne of Goyet. The bones belonged to at least five individuals. Those with an asterisk were directly dated to 40,500–45,500 years ago. Scale = 3 cm.

They were Neanderthals living roughly 40,000 years ago in a cave in Goyet, Belgium — and they were eaten by their own kind. That's the finding of a recent study published in Scientific Reports. The authors report that Neanderthal bones found in this cave show signs of being butchered, cracked to extract marrow, then used to shape tools.

Though archaeologists have found evidence of Neanderthal cannibalism before (in Spain, France and in Croatia), this study is the first to show the practice in northern Europe. The discovery provides more fodder for a longstanding debate between anthropologists over how Neanderthals treated their dead and whether or not they occasionally ate them. Because the Goyet cave is located close to other archaeological sites that show no evidence of cannibalism, the authors say Neanderthal practices probably varied.

The bones that Rougier and her colleagues studied were all excavated from the cave during the 19th and 20th centuries, and put away in museum collections. Using a slew of tests, including DNA and other chemical analyses of the bones, they were able to determine that the remains belonged to five Neanderthals – four adults and one child. There were also remains from butchered animals like reindeer and horses. 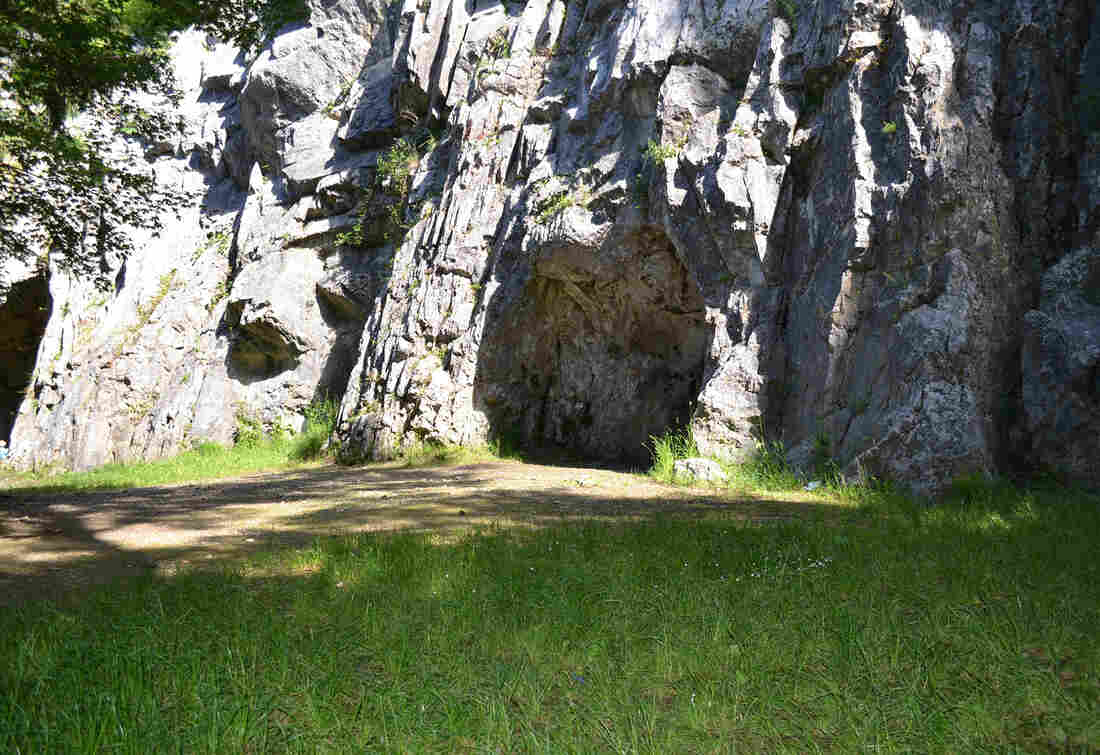 Entrance of the Troisième cavern in Goyet, Belgium, where scientists excavated Neanderthal remains 150 years ago. An international team of researchers has now found evidence of cannibalism in those bones. A.C. Pottier/Préhistomusem de Ramiou hide caption 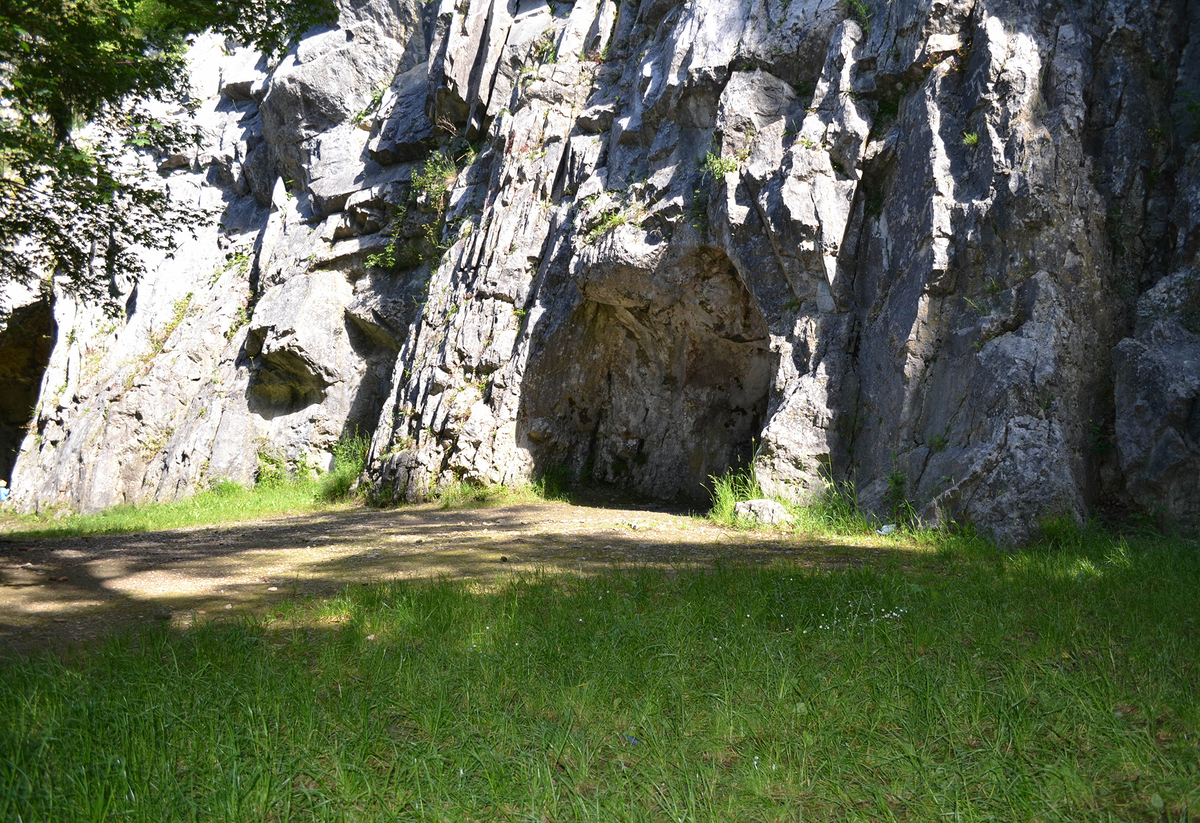 Entrance of the Troisième cavern in Goyet, Belgium, where scientists excavated Neanderthal remains 150 years ago. An international team of researchers has now found evidence of cannibalism in those bones.

The Neanderthal bones seemed to be scarred in the same way as the animal bones. There were thin slashes from stone tools and "percussion marks," likely created by hitting the bones to extract the inner goo of fatty marrow. Other markings on the bones suggest that once the Neanderthals were finished eating, they used the bones as tools to sharpen the edges of stone tools.

Now the question gnawing researchers is: What drove Neanderthals to cannibalism? Was the practice a religious ritual for those who died naturally, convenient midnight snack, or a desperate attempt to stay alive during lean times?

"That's a tough one," says human evolutionary biologist Tim White of the University of California, Berkeley, who was not involved in the study. "Neanderthals were culturally highly sophisticated." Different groups had different burial practices. Scientists have found examples of burials but also of leaving the dead out to the elements. And while some Neanderthal bones show no sign of butchery, others do.

Even the Neanderthal communities in Belgium differed from each other in how they treated their dead, says Rougier. In a site in Spy, Belgium, she says, Neanderthals buried two of their own. "Now we need to try to understand what that means."

In Spain, at another Neanderthal site, researchers found evidence of malnutrition from tooth remains in cannibalized bones. This is a clue that starvation may have driven them to cannibalism. Desperate straits might have been in play at Goyet, Rougier says, but without clear evidence of malnutrition, she can't be sure. These Neanderthals might have simply been following a "waste not, want not" philosophy, or even fulfilling a religious rite, she says.

Unraveling the motivations behind different death rituals and burial practices is difficult, White notes, because bones and scant archaeological artifacts rarely reveal intentions. For example, the funerary practices of the Anasazi, a group that lived in the Four Corners region of the U.S. hundreds of years ago, have also befuddled archaeologists, he says. The Anasazi often buried their dead with pottery and jewelry. But during the same time period, they occasionally ate their dead. Scientists still don't understand the reasons for this variation.

Uncovering the motivations behind cannibalism in Neanderthals, who endured almost 500,000 years throughout Eurasia, is impossible in White's view. "These are very cold cases," he says. "And we don't have a time machine."

Evolutionary anthropologist Steven Churchill of Duke University, also not involved in the study, says the paper is a valuable contribution to the study of Neanderthals. It suggests that Neanderthals across Europe at least on occasion ate their dead. And it forces anthropologists to confront the less delicate dietary practices of our ancestors, he says.

"I think humans like to think humans are special and our ... close relatives are special," says Churchill. That's why traditionally, even anthropologists have been uncomfortable with cannibalism in the family tree.

But accepting that our Neanderthal cousins occasionally ate their own kind doesn't imply that they were brutish, says Rougier. It could simply mean they had a complex set of rituals involving their dead. "[Cannibalism] scares people," she says, but "it doesn't mean that Neanderthals weren't a complex culture. We cannot treat them too simply."