Accessibility links
Inside The Lives Of Farmworkers: Top 5 Lessons I Learned On The Ground : The Salt Most of us don't usually get to meet the people who pick our apples, oranges or other seasonal favorites. What are their lives and work like? Dan Charles has spent the past year finding out. 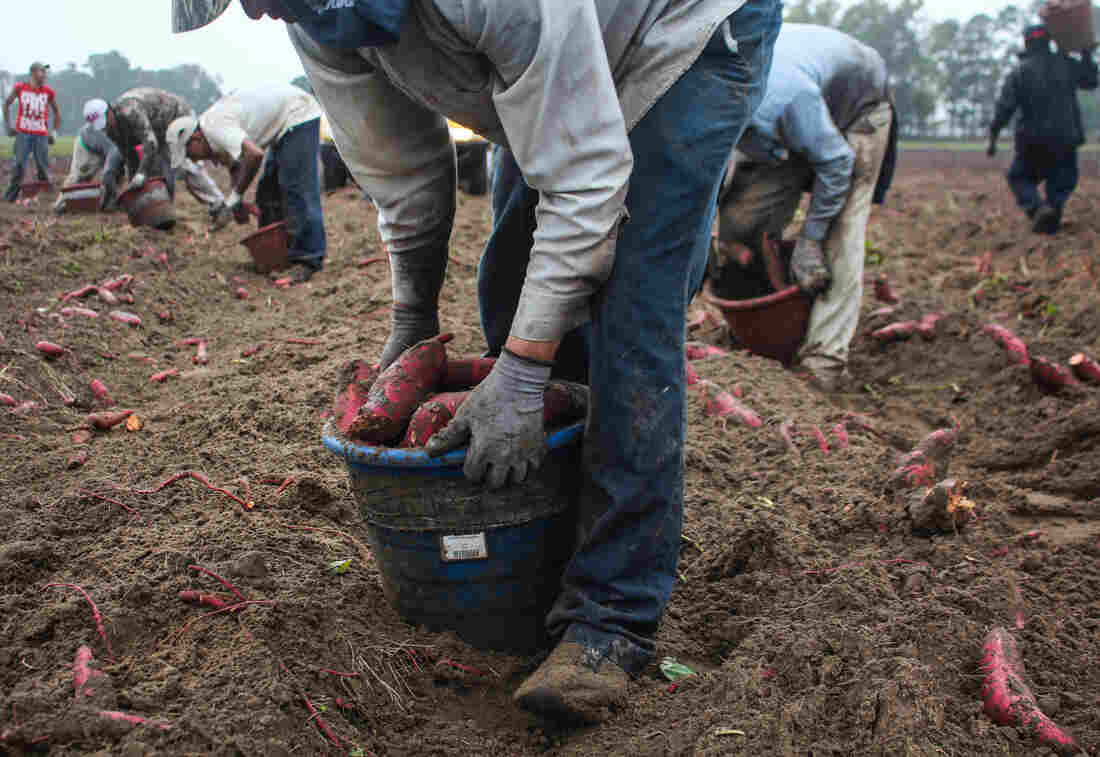 Workers sort potatoes in the field, collecting small and large ones in different buckets. Each bucket weighs 30 pounds or so. A worker will shoulder that bucket and dump it into a flatbed truck hundreds of times each day. Dan Charles/NPR hide caption 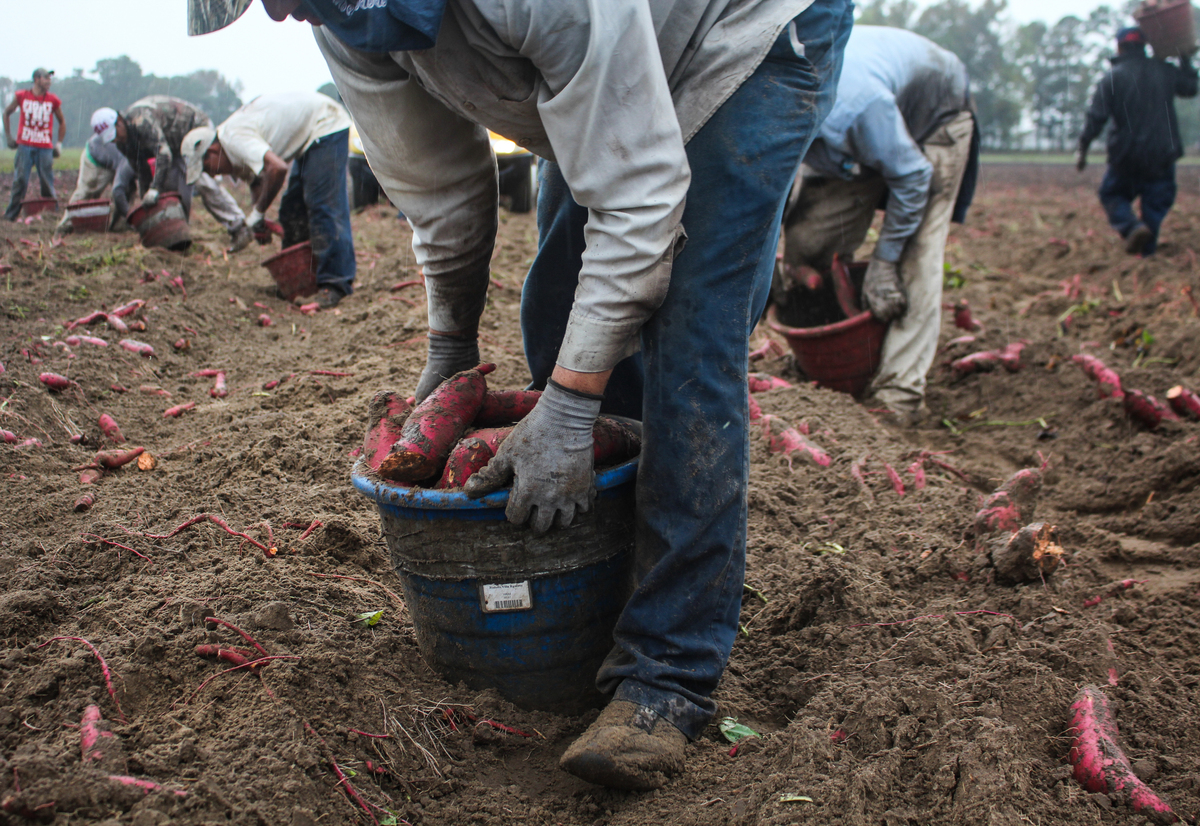 Workers sort potatoes in the field, collecting small and large ones in different buckets. Each bucket weighs 30 pounds or so. A worker will shoulder that bucket and dump it into a flatbed truck hundreds of times each day.

Most of us — and by "us," I mean urban and suburban consumers like me — don't usually get to meet the people who pick our apples, oranges or strawberries.

So about a year ago, I decided to launch a series of stories about the people who harvest some of America's iconic seasonal foods. Many of these workers move from place to place, following the seasons.

I visited workers who were harvesting apples in Pennsylvania, sweet potatoes and blueberries in North Carolina, and oranges and strawberries in Florida. In each place, I also talked to farmers who own those crops and hire the workers.

I set a couple of rules for myself. I wouldn't contact workers through their employers, and I would not use them simply as stage props in stories about current political debates — such as the arguments over immigration, or pesticides, or minimum-wage rules. These were supposed to be stories about people and places, not government policies.

I got a lot of help from several groups that provide services to farmworkers and their families: East Coast Migrant Head Start Project; Redlands Christian Migrant Association; and Florida Rural Legal Services. People at these organizations put me in touch with farmworker families.

So what did I learn? Here's a short list.

1. It's a hard life, but there's more to it than hardship.

The Lives Of Farmworkers

In Florida, Strawberry Fields Are Not Forever

There's no question that the life of a farmworker is tough — especially those who migrate from place to place, following the harvest. They move from one temporary home to another, carrying everything they own with them. The work is physically exhausting, poorly paid, and on top of that, it's completely uncertain. At any moment, workers can be told that they're not needed anymore. More than one farm employer has told me, "Nobody wants their child to be a farmworker."

None of that is particularly surprising. It fits with a familiar image of farmworkers that goes back at least to The Grapes of Wrath. What did surprise me was how many of them told me that they enjoyed the work.

The apple orchard is "a free environment," Jose Martinez told me. "You can express yourself, you can say anything you want." Several farmworkers told me that they were proud of their ability to do this work. They were good at it, and they knew it.

2. The big difficulty is not so much low wages — it's sporadic work.

Farmworkers typically get paid by the pound, and the hourly wage, when they're working, sometimes isn't too shabby. Workers harvesting apples and blueberries, in particular, told me that when they were working fast and the trees or bushes were full of fruit, they could earn more than $20 an hour. As any freelancer or independent contractor knows, though, it's the time when you're not working that kills you.

When I visited Nabor Segundo and his wife, Rosalia Morales, they hadn't been able to harvest sweet potatoes on that day because it was raining and the ground was too wet. So they didn't get paid for that day. There can be days or entire weeks without work, when one crop is finished and the next one isn't yet ready for harvest.

For many farmworkers, a guarantee of steady work in one place could be more attractive than a small boost in their pay per hour.

3. The shortage of farmworkers is real.

Fruit and vegetable farmers across the country are complaining about a growing shortage of farm laborers. The shortage is largely due to a slowdown in immigration from Mexico. From time to time, there are predictions of disaster, with crops rotting in the fields because there aren't enough people to harvest them.

In theory, this should force employers to compete for scarce workers, perhaps by offering higher wages. In fact, farm wages are rising in some places, though not dramatically.

Farmers often argue that they can't afford to pay their workers more because they're competing against vegetable growers abroad, for instance in Mexico. They say that the U.S. has a choice: It can either import more farmworkers, keeping wages here low, or it will end up importing food from low-wage Mexican farms instead. So these farmers have been pushing for a new "guest worker" program that would allow them to bring in additional foreign workers.

Based on my conversations with workers, the choice is not quite that stark. Farmers are able to compete for workers, and some already are doing so. Workers told me about apple and strawberry growers who were known for paying well, providing good housing, and treating their workers fairly. Those farmers had little problem finding enough workers.

Philip Martin, an economist at the University of California, Davis, who's spent his professional life studying farm labor markets, says employers are adapting to the worker shortage in four different ways: offering incentives to workers and treating them better; bringing in technologies (like conveyor belts in the fields) that allow fewer workers to do the same amount of work; replacing workers with machines; and bringing in foreign workers using special visas, called H-2A visas, that are available for seasonal farm labor. The number of these "guest workers" has been increasing sharply in recent years. Martin estimates that they now account for 10 percent of "long-season jobs on crop farms." They represent the majority of workers in Florida's citrus groves and North Carolina's sweet potato fields.

4. That elephant sitting in the corner is legal status, aka "papers."

These stories were about food and the people who harvest it, not immigration policy. I didn't generally ask these workers whether they were in the country legally — just as I don't generally ask scientists or corporate executives about their immigration status when I interview them.

In fact, it's pretty obvious, once you start spending time in the fields, that much of the American food system rests on a tacit agreement to disregard the law.

For many listeners and readers, though, this was the most important question. They filled the comments sections on these stories with commentary about U.S. immigration policies and debated whether those workers — whom they assumed were in the U.S. illegally — should be here at all.

In fact, it's an important question for those workers, too. It came up repeatedly in our conversations, unprompted, because it affects their ability to find housing, education and work. They mentioned the fear of getting stopped by police, because some workers don't have a driver's license. (In most states, you can't get a driver's license if you don't have the legal right to be in the country.) A few workers didn't want me to mention their full names. Some workers noted that their children are citizens, while they aren't.

In fact, it's pretty obvious, once you start spending time in the fields, that much of the American food system rests on a tacit agreement to disregard the law. Workers present Social Security cards that are not their own. Employers accept those cards while assuming that some of those documents are not valid.

There's one category of worker that's often held up as an above-board alternative. These are the "guest workers" who are in the country temporarily on H-2A visas. Yet I realized, when I actually visited farms that employed those workers, that some of those farms also are disregarding immigration rules.

Before arranging the visas for H-2A workers, employers are supposed to advertise those jobs and offer them to any domestic American workers who are willing to take them. In reality, some farms now rely almost completely on H-2A workers, and they don't appear to be trying very hard to hire anyone else.

5. There are fewer families on the move.

At some of the Head Start centers that I visited, the number of migrant children enrolled has been declining. It's a sign that the lives of farmworkers are evolving.

According to a regular survey conducted by the U.S. Department of Labor, the percentage of farmworkers who were "settled" in one community has been rising steadily in recent years, reaching 78 percent in 2012. That's up from 42 percent in 1998, when there was a surge of "newcomers" who had recently entered the country from Mexico. The percentage of farmworkers in this "newcomer" category has fallen from 20 percent in 2000 to just 2 percent in 2012. There's no longer a stream of new workers arriving from Mexico.

According to Martin, the increasingly settled farmworker population is part of the reason why farms in some areas are having a hard time finding workers: Those workers aren't willing to make the trip anymore.

In many ways, it's a positive trend. Farmworkers are settling into communities and establishing local connections. They're less likely to be hidden away in isolated "work camps" in far corners of orchards and fields. Bit by bit, those workers are coming out of the shadows of the American food economy.