Accessibility links
Does Subsidizing Crops We're Told To Eat Less Of Fatten Us Up? : The Salt There's a disconnect between what we're told to eat and what crops the U.S. subsidizes. Many critics blame farm policy for promoting bad eating habits. The reality is a lot more complicated.

Does Subsidizing Crops We're Told To Eat Less Of Fatten Us Up?

Does Subsidizing Crops We're Told To Eat Less Of Fatten Us Up? 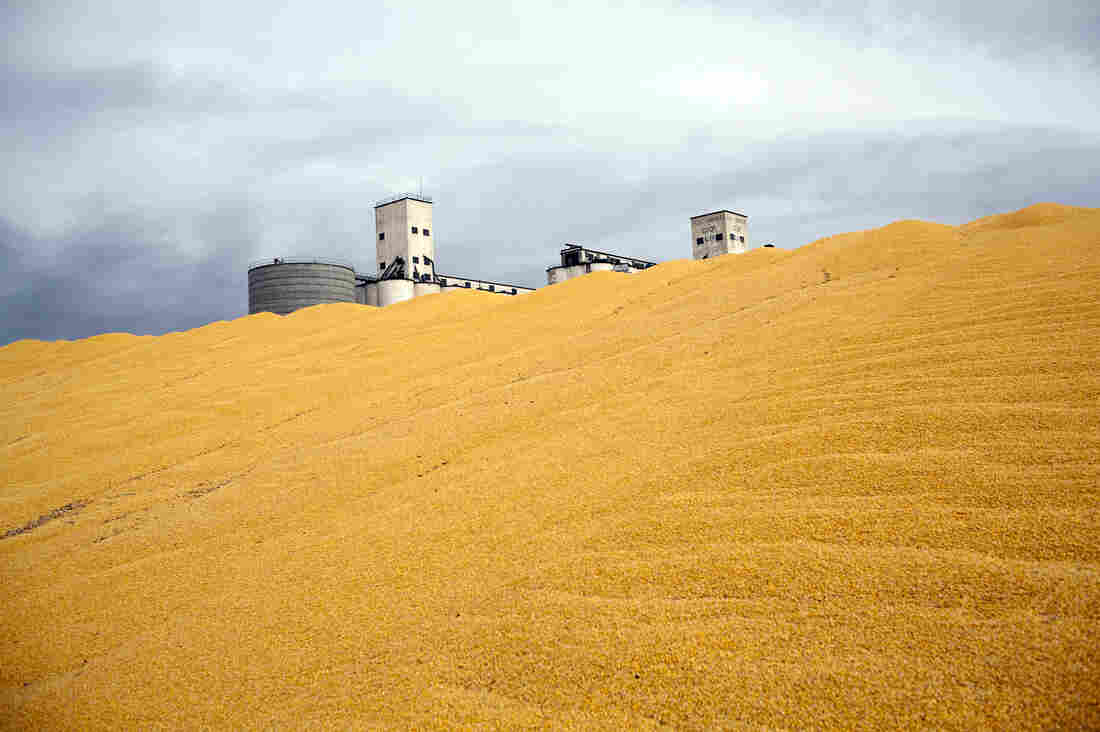 Surplus corn is piled outside a storage silo in Paoli, Colo. Do federal farm subsidies encourage the production — and perhaps overconsumption — of things that we're told to eat less of, like high fructose corn syrup or meat produced from livestock raised on subsidized grains? Robert Nickelsberg/Getty Images hide caption 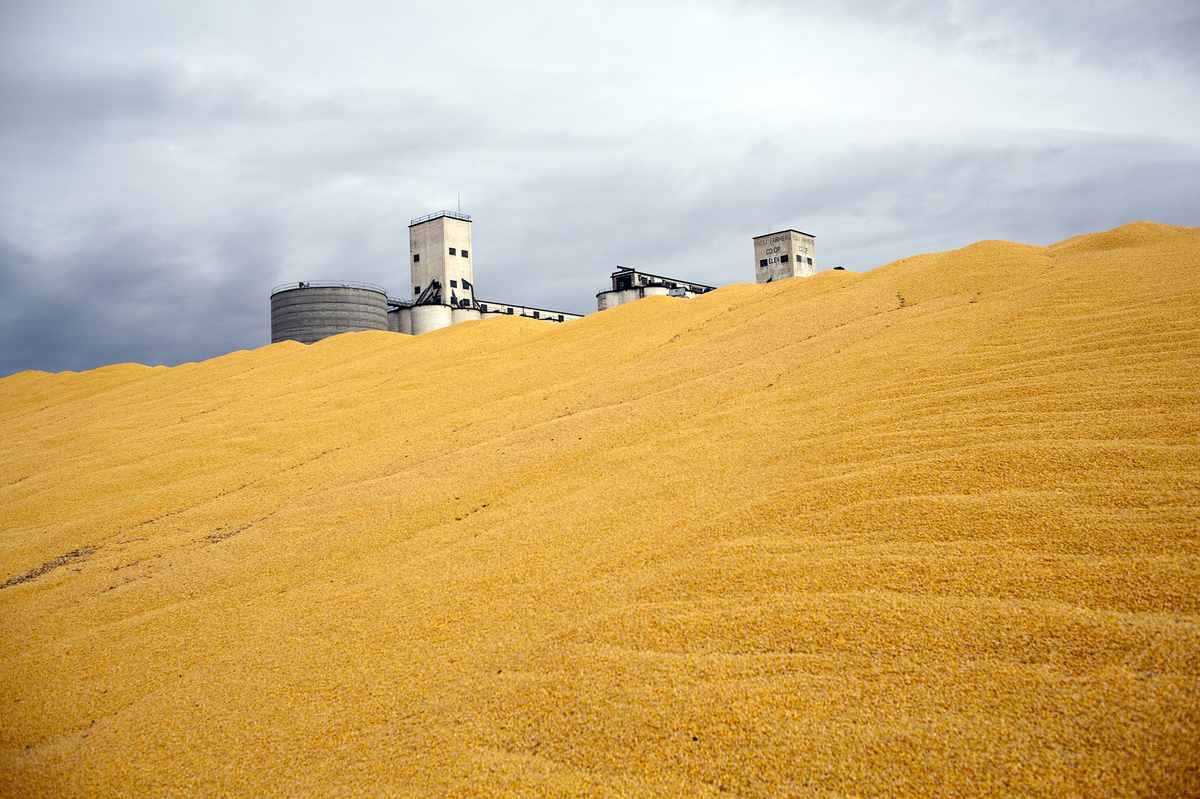 Surplus corn is piled outside a storage silo in Paoli, Colo. Do federal farm subsidies encourage the production — and perhaps overconsumption — of things that we're told to eat less of, like high fructose corn syrup or meat produced from livestock raised on subsidized grains?

If you're a taxpayer, you're in on this system.

We — the U.S. taxpayers — help subsidize farmers by paying part of the premiums on their crop insurance. This helps ensure that farmers don't go belly up, and it also protects against food shortages.

But are there unintended consequences? For instance, do subsidies encourage the production — and perhaps overconsumption — of things that we're told to eat less of? Think high fructose corn syrup or perhaps meat produced from livestock raised on subsidized grains.

Researchers at the Centers for Disease Control and Prevention and Emory University in Atlanta were curious. In a paper published in JAMA Internal Medicine, they point to a disconnect between the nation's agricultural policies and nutritional recommendations.

Americans are told to fill 50 percent of our plates with fruits and vegetables. But here's the contradiction, as the researchers see it: U.S. agriculture policies "focus on financing the production of corn, soybeans, wheat, rice, sorghum, dairy and livestock," the researchers write. About $170 billion was spent between 1995 and 2010 on these seven commodities and programs, according to the researchers.

To evaluate the association between the consumption of these foods and the health of Americans, the researchers used data collected by a federal health survey to analyze the daily diet of 10,308 adults.

The survey was based on 24-hour recall, where participants are asked to name everything they ate over the past day. The researchers then estimate the consumption of subsidized food commodities as a percentage of total calories consumed. So what did they find?

"It makes sense," says one of the study authors, K.M. Venkat Narayan, a professor of global health and epidemiology at Emory University's Rollins School of Public Health.

He says the findings from this study and prior research suggest that subsidies increase production and consumption of products made from these seven foods. "And [consumption] of those foods is associated with cardiometabolic risk factors."

Narayan acknowledges the study has shortcomings. For instance, the methodology — known as a cross-sectional study — captures the association at just one point, a snapshot in time. It's possible if people had been interviewed about their diets on a different day — or over a series of years — a different picture would emerge.

It's also possible that farm subsidies have less influence on what we ultimately choose to eat than this study suggests. (More on that below.) So, this paper doesn't prove a cause and effect. However, this is certainly not the first time that U.S. farm policy has been implicated in the obesity epidemic.

The idea that our agriculture policies may undermine the health of Americans has been gaining traction. Consider this: The U.S. "devotes less than 1 percent of farm subsidies to support the research, production and marketing" of fruits and vegetables, according to this editorial penned jointly by former New York Times columnist Mark Bittman, food writer Michael Pollan, and Ricardo Salvador of the Union of Concerned Scientists in 2014.

The editorial, titled "How A National Food Policy Could Save Millions Of American Lives," points out that "Michelle Obama [is] warning Americans to avoid high-fructose corn syrup at the same time the president is signing farm bills to subsidize its production."

The writers suggest the government is funding both sides of the war on Type 2 diabetes, a disease that costs the U.S. $245 billion each year. "The government subsidizes soda with one hand," by subsidizing corn farmers, "while the other writes checks to pay for insulin pumps" to help treat diabetes.

But, hold on! Are subsidies to farmers really driving our consumption of sodas or other less-than-healthful foods?

Not so fast, argues Raj Patel, a research professor at the University of Texas, Austin who studies global food systems. "Commodity subsidies are a small part of a bigger problem," he writes in an editorial published in JAMA Internal Medicine alongside the new study.

Lots of factors shape our food choices, from our biological attraction to sugar and other energy-dense foods to the convenience of cheap, packaged goodies. So if we wanted to nudge people to healthier eating habits, what policies might we want to change?

"One way would be to limit demand by restricting the advertising of highly processed food, especially to children," Patel writes. As we've reported, despite pledges by the food industry, most foods and beverages marketed to kids are full of salt, sugar and fat. And food behemoths pay millions of dollars to market junk food and soda — for example, Beyonce's $50 million endorsement of Pepsi.

Another way to nudge people away from sweetened drinks is to tax them. As we've reported, the city of Philadelphia recently voted in a tax on sweetened beverages, and a similar measure in Mexico prompted a decline in sales of sugary drinks.

The evidence suggests that the appeal of sugar is so strong that it's tough to pin overconsumption to something as simple as farm policy.

And then there's the idea that crop subsidies don't necessarily make food cheaper. Here are two reasons why. First, only a tiny slice — an estimated 15 percent — of the price we pay for processed foods, say, a box of cornflakes or cookies made with wheat and corn syrup, actually goes to the farmer.

"If the price of corn doubles, the price of cornflakes may go up only 10 percent," says Robert Paarlberg, an adjunct professor of public policy specializing in agricultural policy at Harvard's Kennedy School.

The rest of the retail price is set by packaging, processing, shipping and advertising. "Some economists have argued that the cardboard box costs more than the corn inside the box," Paarlberg says. So, 85 percent of what we pay for food has nothing to do with commodity prices.

"We place an import levy on cheap sugar from abroad," says Paarlberg. "We use it like a quota system to keep cheap sugar from the Caribbean or Australia or South Africa out of our market." And without the global, free market competition, "that raises the price inside the U.S. market ... for all sweeteners," including high fructose corn syrup, he says. Also, a significant amount of corn grown in the U.S. is used to make ethanol, so this demand also keeps the price of corn up.

So, as you can see, the way in which U.S. farm and trade policies influence Americans' eating habits is complicated. And Paarlberg argues that "the cost of commodity crops is a trivial factor in the obesity equation."

Others sound a similar note. Patel argues that many farmers still need the safety net of crop insurance subsidies. He argues that subsidies are "vital" for "indebted farmers" who need to pay off creditors.

"Yanking away the income on which many depend will do little to help" promote more healthful eating or more sustainable farming practices, Patel says.

I heard this same response from other farm economists and academics who study agriculture policy. The authors of the new study suggest we should realign government support programs toward more healthful foods. "I would agree with that," Harold Van Es, of Cornell University, told me. "Although this does not necessarily imply that we should not support [i.e., insure] the traditional commodities."

Many experts agree: We need new thinking about how to incentivize more nutritious food choices at the retail level, especially given that the U.S. government spends far more on food assistance programs such as SNAP, aka food stamps, compared with crop subsidies.

Perhaps this is why the government has begun funding programs, such as a subsidy for food stamp recipients to buy fresh food at farmers markets. Meanwhile, some insurers are experimenting with nudging shoppers to make better choices by offering rebates for healthful food.

Another example? In several U.S. cities, doctors are now prescribing fruits and vegetables — an Rx that can be traded in for free produce at the farmers market. It's part of a program that aims to reshape the buying habits of people at risk of obesity, diabetes and other lifestyle-related diseases.