Accessibility links
Salvage Supperclub: A High-End Dinner In A Dumpster To Fight Food Waste : The Salt The ingredients — think wilted basil, bruised plums, garbanzo bean water — sound less than appetizing. Whipped together, they're a tasty meal that show how home cooks can use often-tossed foods.

Salvage Supperclub: A High-End Dinner In A Dumpster To Fight Food Waste

Salvage Supperclub: A High-End Dinner In A Dumpster To Fight Food Waste 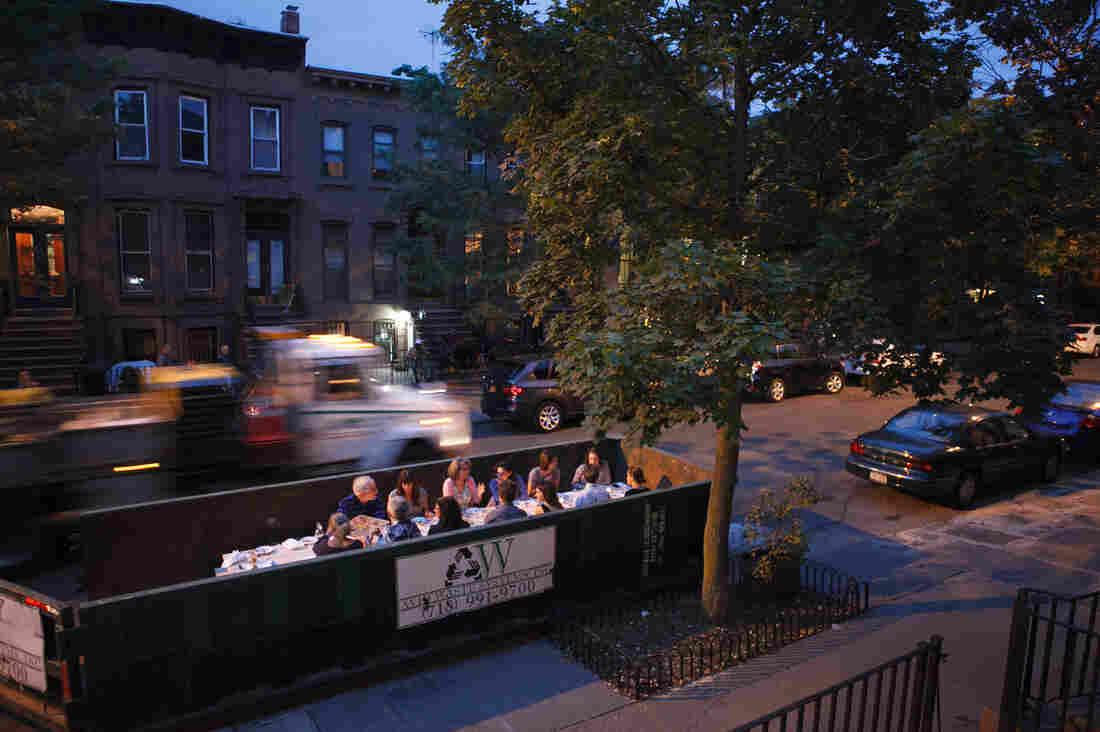 The Salvage Supperclub hosts dinners in clean, tastefully decked out dumpsters. The menus highlight ingredients frequently tossed out by home cooks – think wilted basil or bruised plums — that could be put to tastier uses. Courtesy of Andrew Hinderaker hide caption 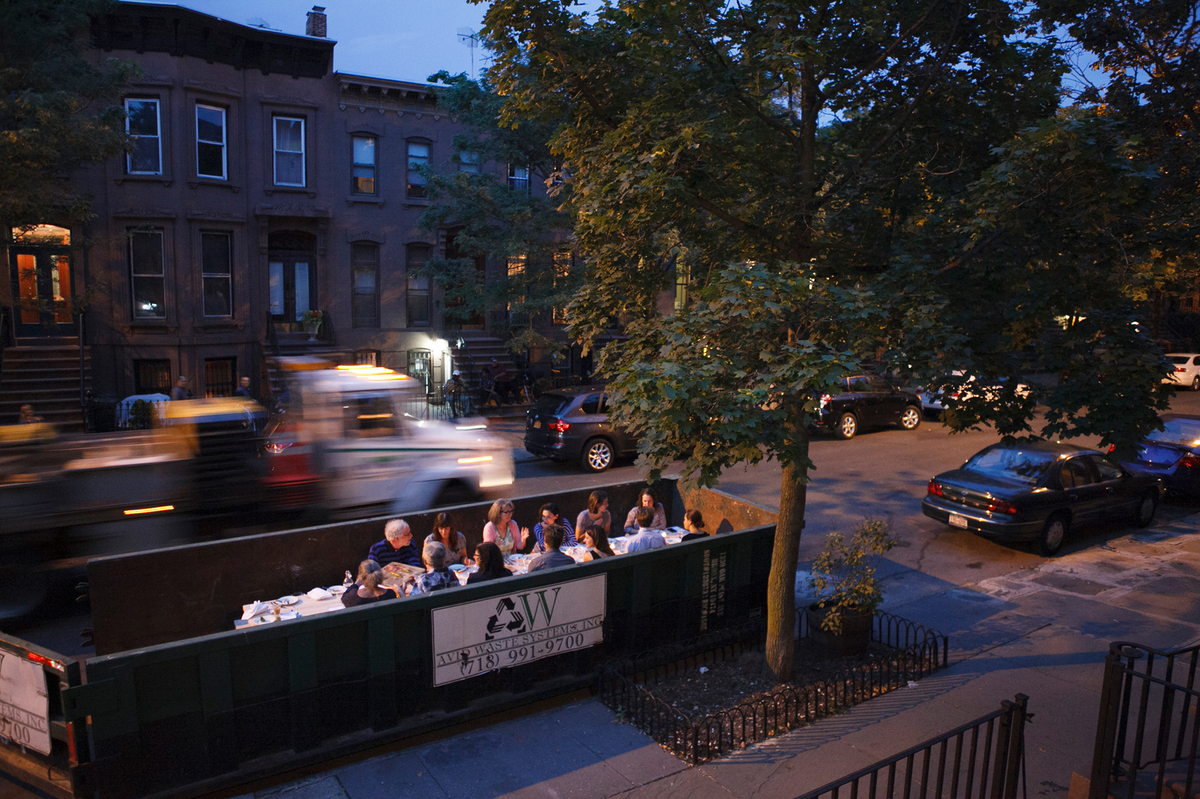 The Salvage Supperclub hosts dinners in clean, tastefully decked out dumpsters. The menus highlight ingredients frequently tossed out by home cooks – think wilted basil or bruised plums — that could be put to tastier uses.

It's a balmy Sunday night in late June in San Francisco, post-Pride parade, and I'm about to eat dinner in a pristine blue dumpster in a dead-end SOMA (South of Market) street. The event, Salvage Supperclub, seeks to draw attention to food waste and encourage home cooks to not throw out less than ideal, yet still edible stuff.

A glance at the menu and the evening looks promising. The hosts are gracious, the guests friendly and the organizers earnest. The dumpster is simply but tastefully decked out: glass tea lights, long wooden benches, bar towel napkins.

But the bottom line: A dumpster dinner better be delicious or I'm out of here.

This Is What A Feast For 5,000 Made From Food Waste Looks Like

But, with the exception of the banana skin — it was hard to get past the slimy texture and scent of rot, even if the peel was reimagined as a crispy doughnut — it's all finger-licking good. And not too fancy: the sort of dishes — fava, corn and lettuce soup; tomato, eggplant and squash ratatouille; mini veggie burgers with crispy potatoes — that modest home cooks might actually make. Which is chef Pesha Perslweig's intention for the meal, the brainchild of New Yorker Josh Treuhaft, an industrial designer who has thrown similar dumpster dinners in Brooklyn, N.Y., and Berkeley, Calif.

"The idea behind this multi-course, veg-forward tasting menu is for eaters to see the incredible potential many of us fail to see in our food," says Treuhaft, whose day job is as a designer focused on sustainability. He hopes Salvage Supperclub might play a role in modifying people's behavior for the greater good.

"I want to engage people and get them excited about food waste prevention, so we send less food to the landfill or compost," he says. "The goal here is to broaden the scope of what is edible."

Sure, the concept sounds gimmicky: Bring together a bunch of food-obsessed Bay Area dwellers willing to pay premium San Francisco prices to get cozy at a communal table in a pop-up venue typically associated with trash. Then, invite them to chow down on grub frequently destined for the green bin. But the assembled group of 16 seem less the sort in search of the next new foodie thing and more eager to eat well and save the world, or at least be more mindful about waste. There's a retired high school math teacher and his family, a hairdresser friend of the chef and several guests with food-related jobs.

The San Francisco dinners (there were two back-to-back) also serve as benefits for Food Runners. The nonprofit has rescued excess food from the city's restaurants, corporations, caterers, hotels and others for almost 30 years. Food Runners helps perfectly edible, perishable and prepared food find its way to people in need — at soup kitchens, homeless shelters, group housing and senior and low-income apartments.

Demand for this service has ratcheted up in recent years, as the number of homeless and hungry in San Francisco has risen significantly. At the same time, the boom in tech companies with gourmet cafeterias has coincided with a dramatic uptick in donations from millennials who want to divert excess ready-to-eat fare to charity. About two tons of donations a week come from tech firms alone, Food Runners founder Mary Risley estimates. Food Runners delivers 16 tons of food a week, enough to make 5,000 meals a day.

Ingredients for the supper clubs are sourced from emerging local players in the food waste movement. In the mix: Emeryville-based Imperfect Produce, whose mission is to find homes for so-called ugly fruits and vegetables through a delivery subscription box; and San Francisco startup Cerplus, an online marketplace that connects farmers' and wholesalers' surplus and secondary produce with restaurants and food businesses. 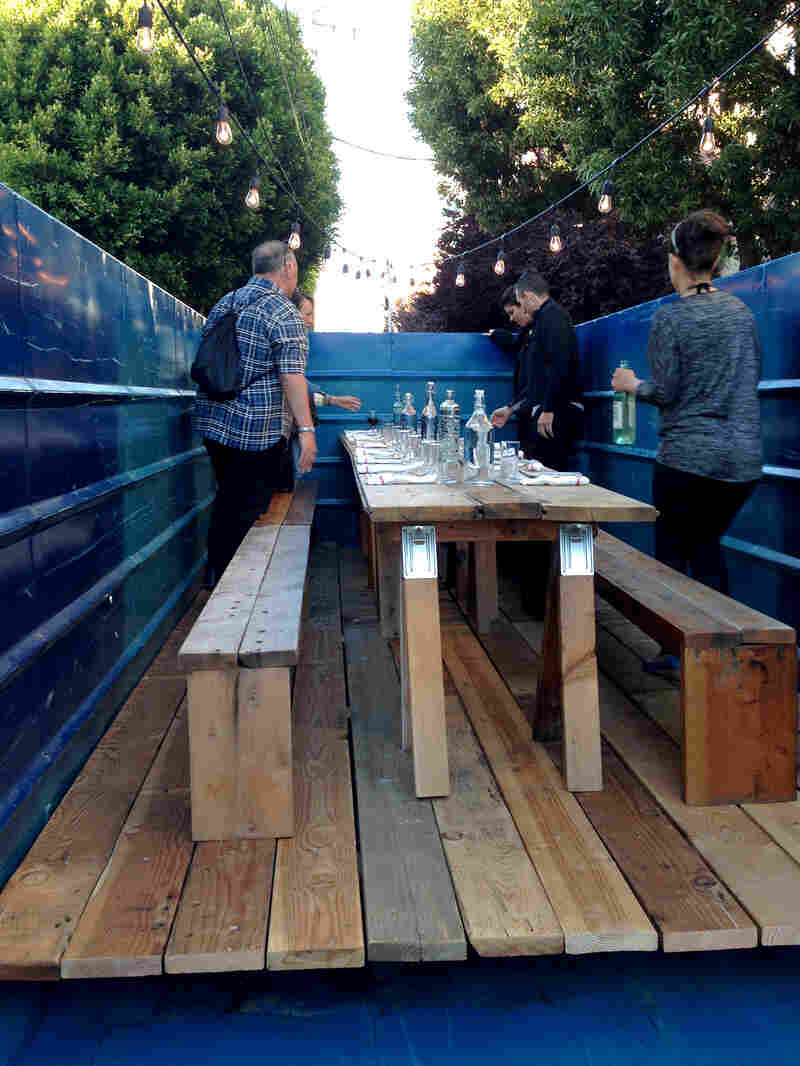 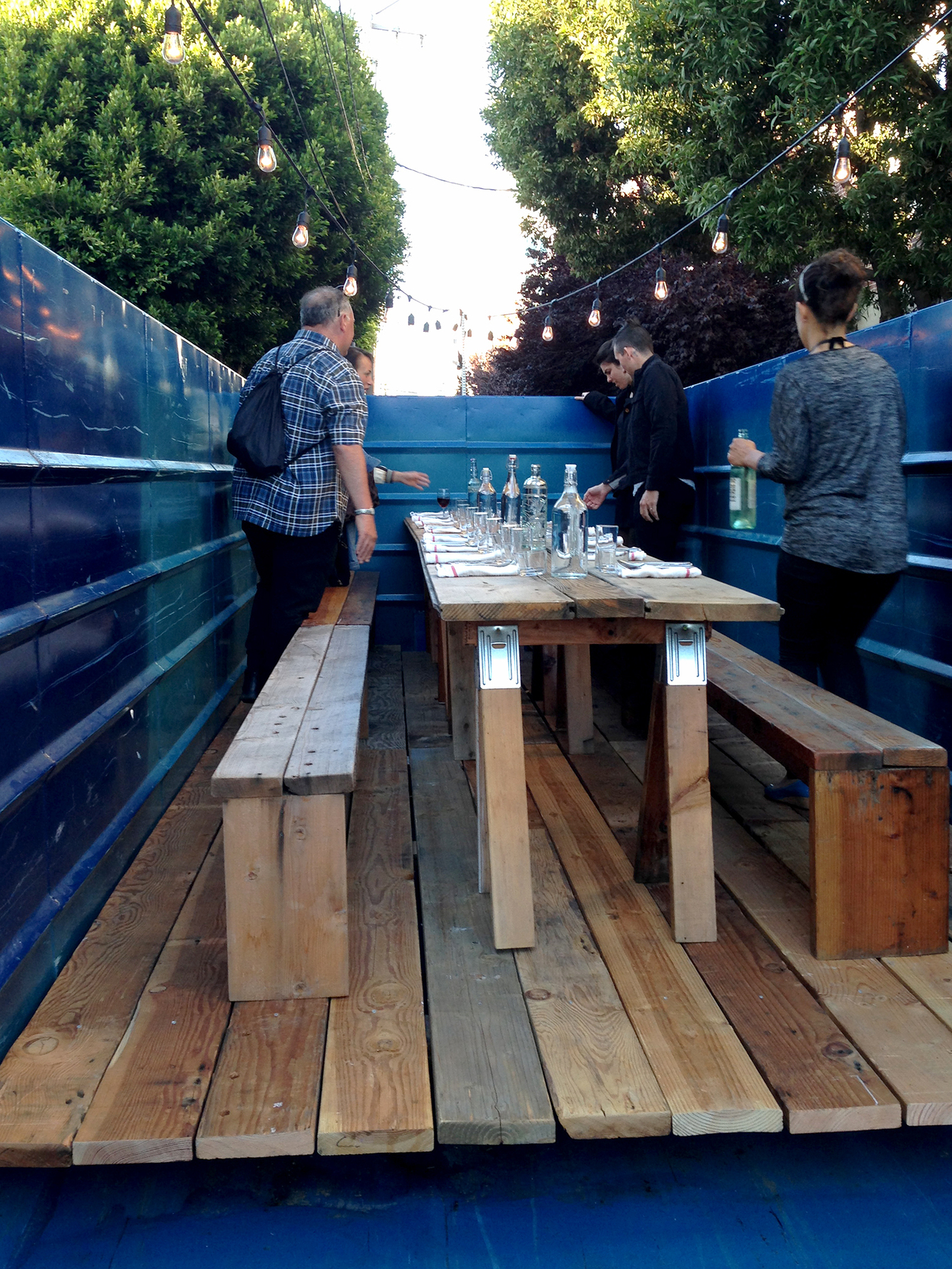 Self-taught, private chef Perlsweig grew up with a grandfather who survived the Depression. Food waste was practically unheard of in that house. "Once I started working on this project, I realized that there is a lot we can all do to cut down on how much we waste," says Perlsweig, who uses the Instagram handle the_bruisedpeach.

Perlsweig enjoys the challenge of reclaiming food for the supper club: Aquafaba, the viscous canned chickpea liquid most of us dump down the drain, replaces egg in a basil aioli. It also works as a whipped cream substitute on top of a banana split. There are melon seeds in cocktail concoctions; stone-fruit-pit-infused sweet syrups; fava pods soaked and steamed and used in stock.

At this dinner, an entrepreneurial type dubs the vegetable-pulp sliders a potential food truck hit. The wine flows, the fog moves in, diners wrap blankets around their shoulders and open packet hand warmers. There's a comfortable lull in conversation. Into the void comes a city recycling truck, which noisily pulls up right beside the dumpster. This fortuitous turn of events perks up the guests, now mostly intent on keeping warm between courses. You couldn't script this stuff if you tried.

Treuhaft is delighted. There's a videographer on hand to document the sight and sound of the city's garbage guys on their routine rounds picking up this city's recyclables and waste. Not captured on camera: the aroma of decomposing organic matter destined for a landfill or compost location.

It's a timely and pungent reminder that, in this city of excess and squalor, where many eat like kings while many others barely stave off starvation, much still goes to waste.

"I hope my guests come away from my dinners with a new outlook on how they're using and not using the food in their kitchens," says Perlsweig, who sports rose-hued hair and obligatory industry-inspired ink. "It makes me happy to hear that a former guest made carrot top pesto or was inspired by a dish of mine. Change is hard. If I can move the dial, however small, in the right direction, then I feel like I've done my job."

Sarah Henry is a food writer based in the San Francisco Bay Area and the author of Farmsteads of the California Coast. A version of this story first appeared in Edible San Francisco.