Accessibility links
This Spanish Farm Makes Foie Gras Without Force-Feeding : The Salt A farmer in Spain makes foie gras from wild geese who gorge themselves naturally on acorns and olives. New York chef Dan Barber describes tasting it as "the best culinary experience of my life." 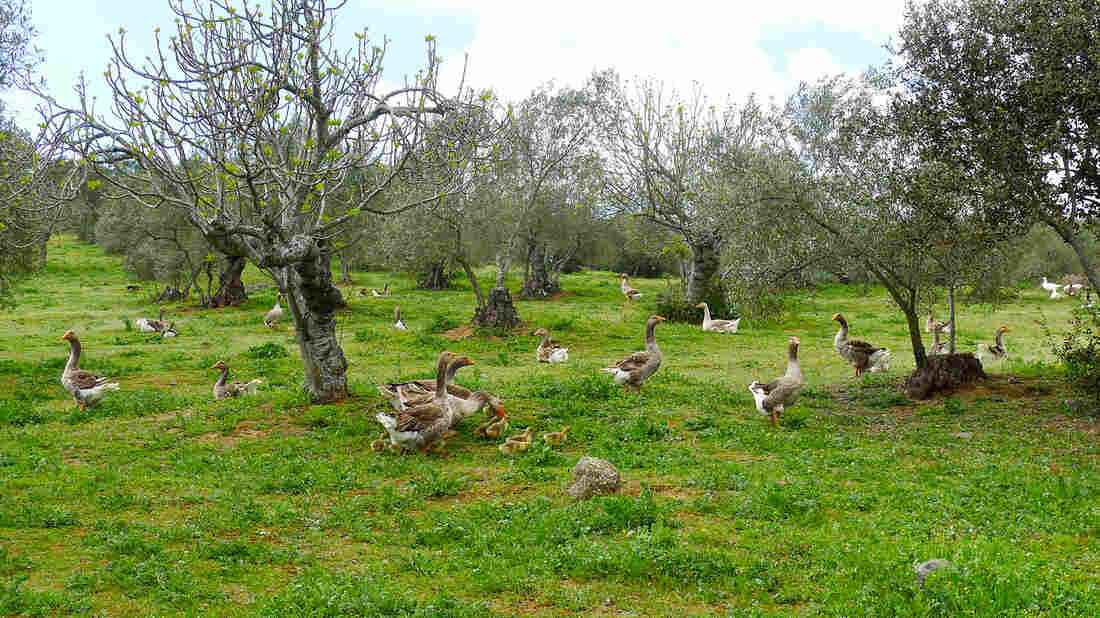 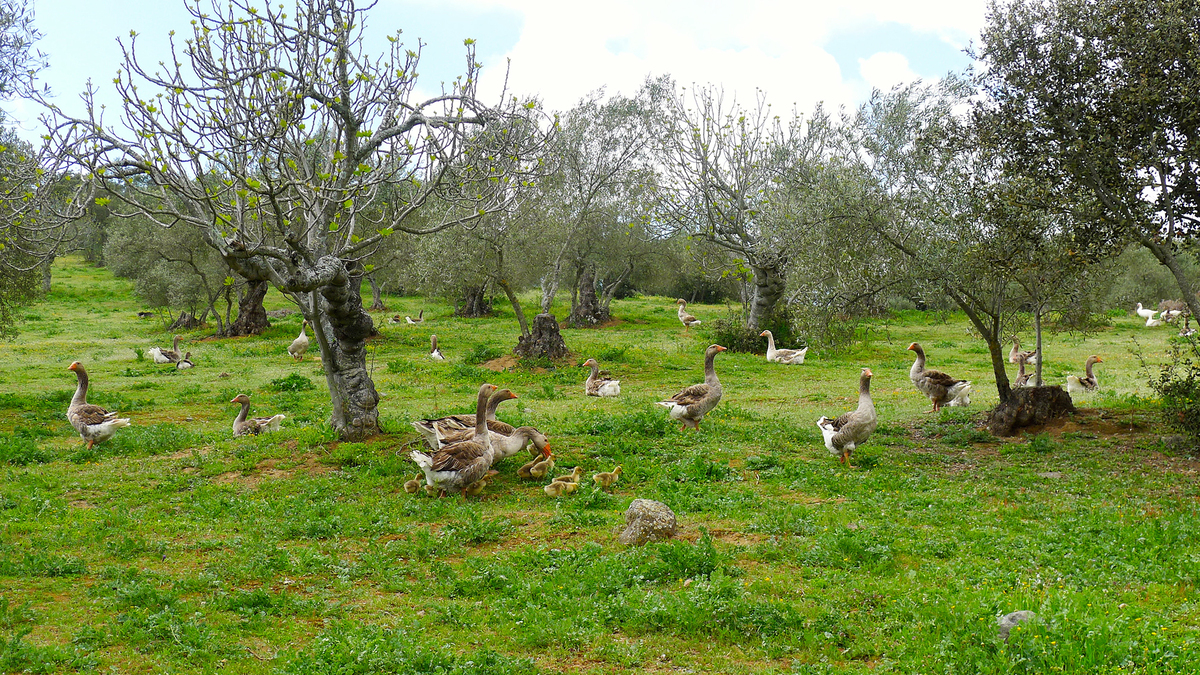 A five-hour drive southwest of Madrid, I pull into a tiny town square filled with songbirds and an outsized Catholic church — where Eduardo Sousa and Diego Labourdette are waiting.

They're an odd couple. Sousa is a jovial fifth-generation Spanish farmer. Labourdette is a soft-spoken academic — an ecologist and migratory bird expert — who teaches at a university in Madrid. But they're in business together — in the foie gras business.

In 2013, Sousa and Labourdette teamed up to market an ethical, sustainable way of making foie gras — the fatty goose or duck liver that's a delicacy in Europe. Most foie gras is the result of gavage, or force-feeding. Producers force tubes down geese's throats and pump the birds' stomachs with more grain over the course of a couple weeks than they would normally eat in a lifetime. As a result, their livers grow 10 times bigger, with large deposits of fat — which is what makes foie gras so rich. But this practice is banned in at least 20 countries. 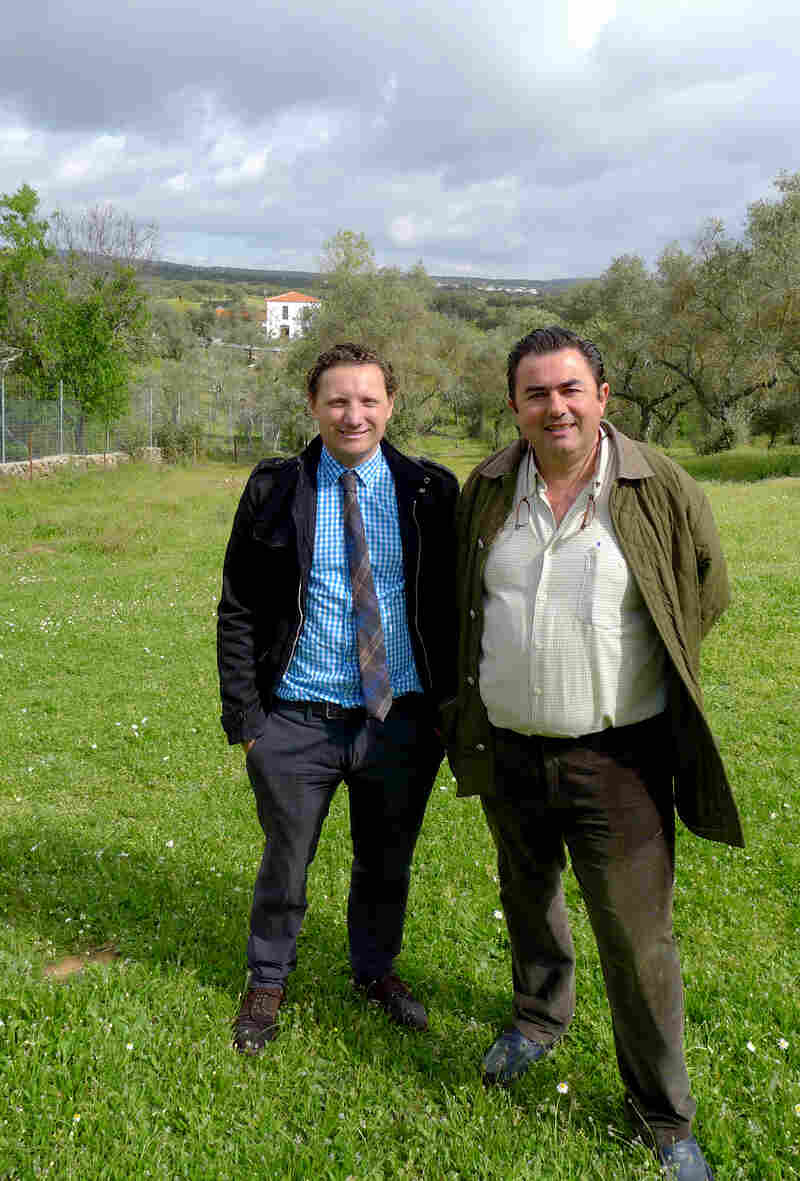 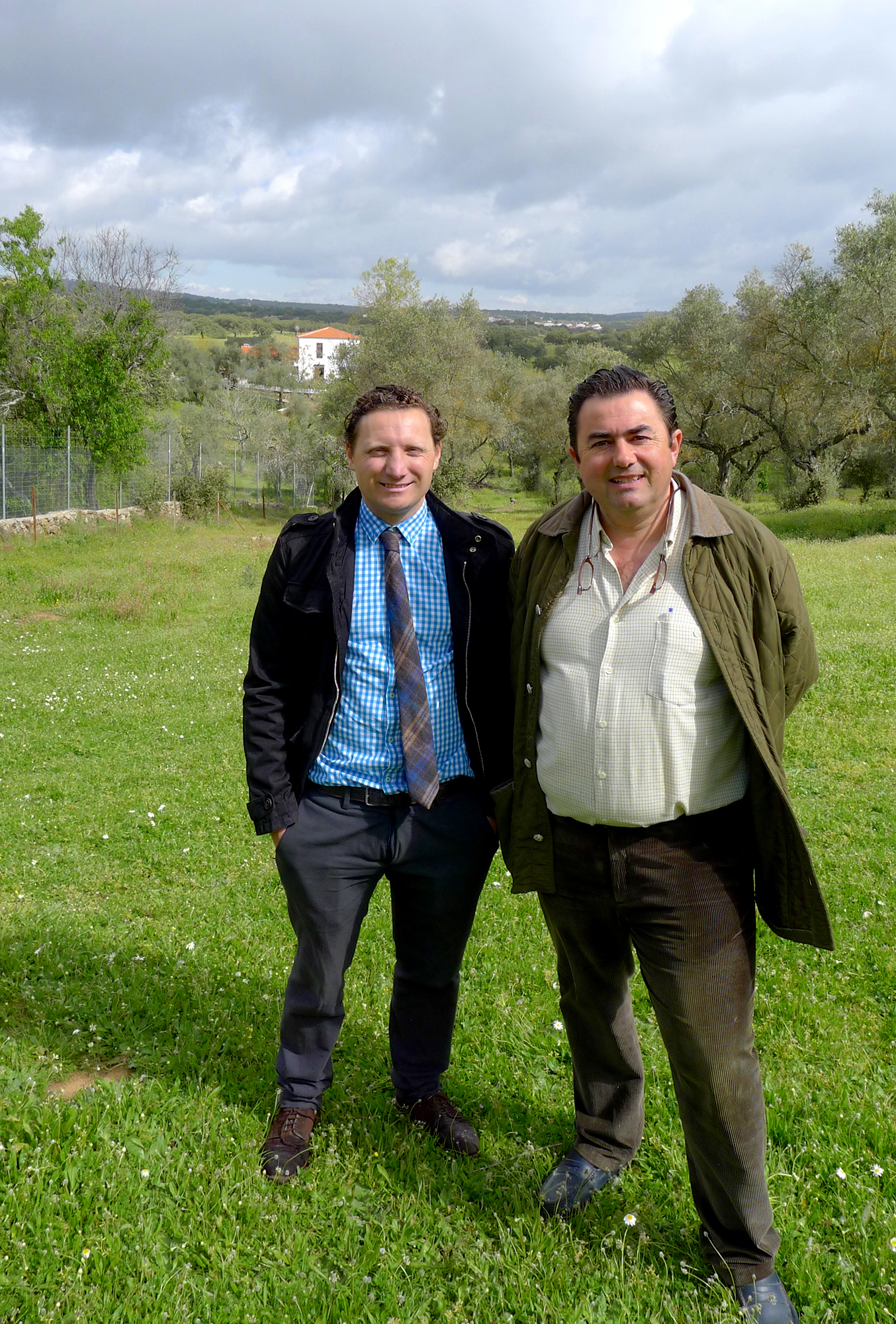 Diego Labourdette (left) and Eduardo Sousa are business partners — together they run a 1,200-acre goose farm just outside of Pallares, Spain.

Sousa and Labourdette figured out how to ditch the force-feeding — their product is made from wild geese who touch down in Spain once a year to gorge themselves on acorns and olives before flying south for the winter.

They have since become darlings in the culinary world.

"The market for foie gras is incredible — France makes millions of kilos a year," Sousa explains as we amble around his 1,200-acre goose farm just outside of Pallares, Spain. "That's another world from what we do here."

The duo set out to commercially produce foie gras in a natural, sustainable way. But Sousa says their technique is nothing new: It was used in Spain more than 500 years ago, before the Spanish Inquisition.

"In 1492, Spain expelled the Jewish family that lived on this land, and the church took their property," Sousa explains. "Three hundred years later, my family bought it from the church, and we revived the old Jewish family's tradition. They used to raise geese on this land."

As he walks among rolling green hills, dotted with olive trees and oaks, Sousa calls out to his approximately 2,000 geese as if they were children. The geese here roam free — they're not housed in coops. In fact, the farm hardly has any buildings at all. Instead of force-feeding, the geese fatten themselves up naturally — doubling their body weight in just a few weeks to prepare for their annual migration.

"The natural cycle for the wild goose of Europe is to spend the summer in Denmark, Sweden, Norway, northern Germany or parts of Russia and Ukraine. Then they migrate south to Africa each autumn," Labourdette explains. "They stop here in Spain on their way, to eat and gain energy for the long flight. But lots of them never leave because they find such a good habitat here."

Geese are adaptable, he says, and they eat whatever the environment provides. Foie gras from Denmark has a fishy taste, because the geese eat seafood there. Here in Spain, they feed on calorie-rich acorns, olives, figs and seeds.

Unlike big commercial foie gras farms, where geese are slaughtered every few weeks for their livers, this farm slaughters once a year — usually in October — with the first chill of autumn, on the night of the new moon.

Sousa shows me into a little stone house on his property where the foie gras is actually made. He uses the word "sacrifice" to describe the killing of geese. 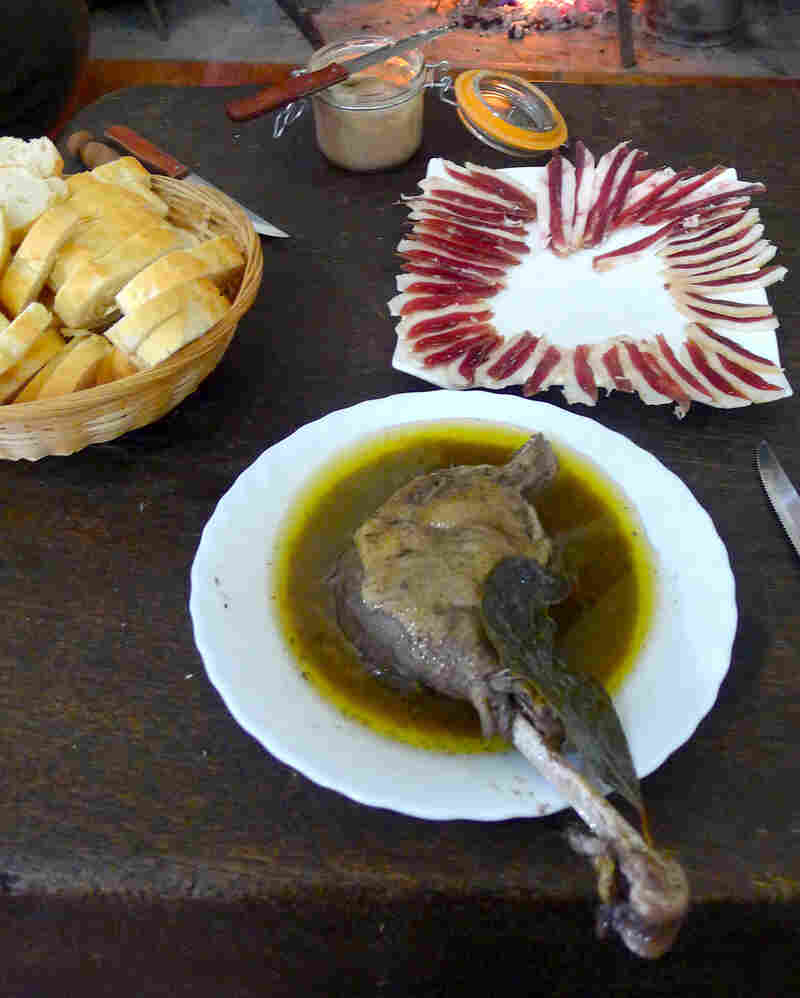 A sampling of all the goose meat products Sousa makes on his farm. Lauren Frayer for NPR hide caption 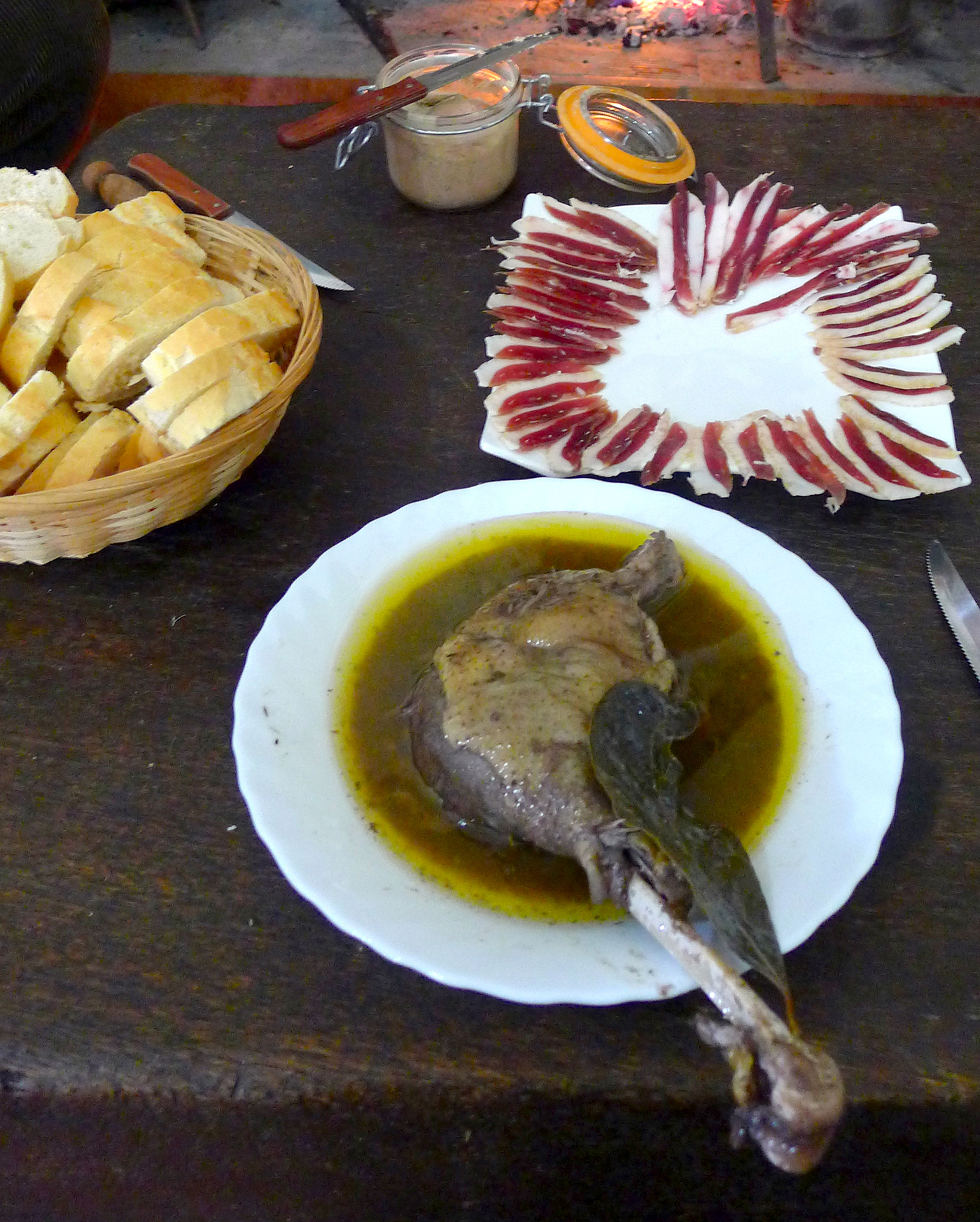 A sampling of all the goose meat products Sousa makes on his farm.

"We paralyze them with flashlights. They become hypnotized, when they're confronted with such bright light at night," he says. "It's an ancient practice. Hunters here use the same tactic. The birds seem like they're asleep. Then we sacrifice them with a knife. It happens very quickly, and they don't suffer."

Feathers are plucked for goose down. Some of the meat is cured. And the goose livers are seasoned and boiled whole for about 20 minutes in glass jars — the same jars in which they're sold.

Sousa invites me into his farmhouse to try some of last fall's batch. The farm's caretaker strums flamenco on his guitar as we gather around a wooden table.

The foie gras is smooth and rich. To me, it somehow tastes even better, because I'm on this farm where it's made, watching mist roll down over green hills. Its flavor has hints of all the wild herbs, olives and fruits the geese have eaten on these hills.

"Songs have the smell and flavor of the land they're from... just like our geese," says Domingo Diaz Escudero — the farm caretaker and flamenco singer. "They're part of nature."

In 2006, this farm's foie gras won the Coup de Coeur, a coveted French gastronomy award (it's like the Olympics for foodies.) That caught the attention of famous New York chef Dan Barber, who visited Eduardo Sousa's farm.

"I went to Spain a few months ago and I had the best foie gras of my life," Barber said in a TED Talk afterwards. "The best culinary experience of my life. Because what I saw, I'm convinced, is the future of cooking."

Barber described the utter simplicity of how this foie gras is made. He called it transformative and sustainable. He also wrote about it in his latest book, The Third Plate. And Sousa's sales skyrocketed.

"This was always just a hobby for my family," Sousa says. "But ever since the visit of Dan Barber, I've started getting orders for my foie gras from all over the world."

He sells every gram of foie gras he makes — and there's quite a long waiting list. A small jar costs €200 (about $220), because it's produced only once a year — from about 1,600 geese every autumn — which allows for the natural re-population of his flock, and plenty of food for the others. He takes only what nature allows. 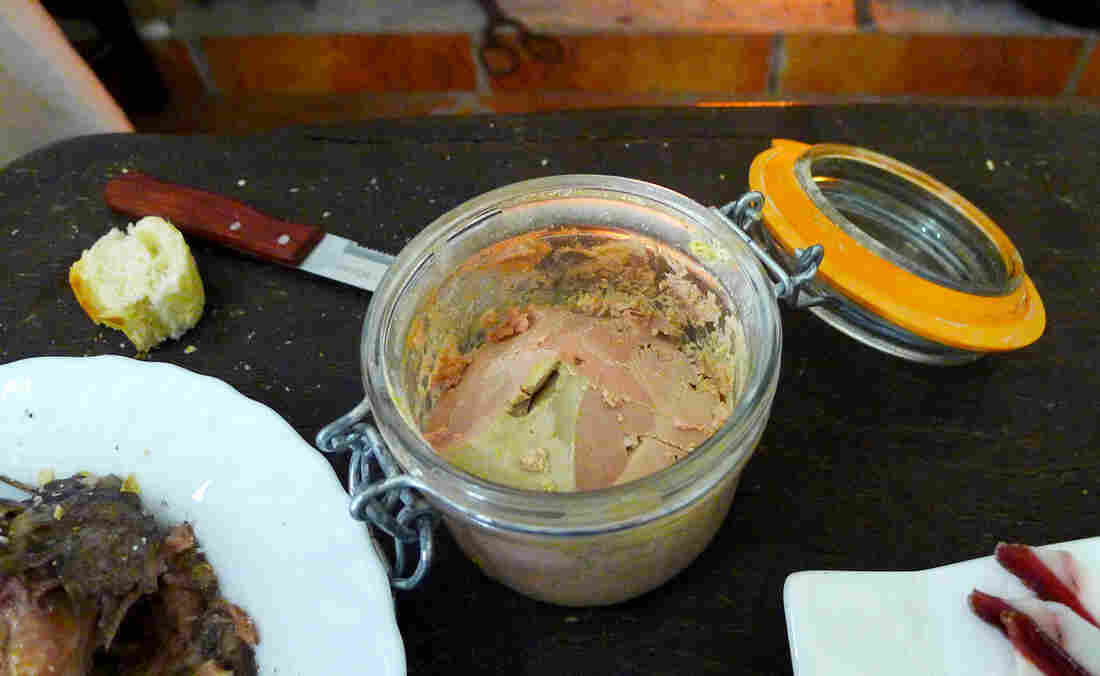 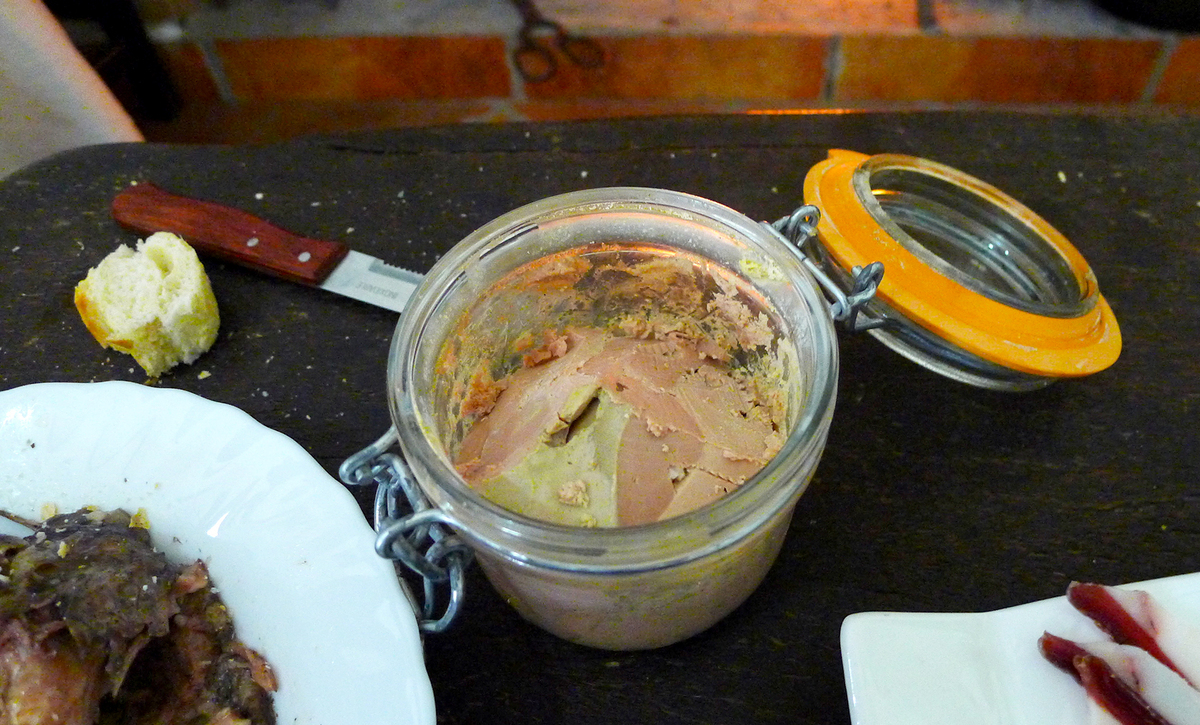 Sousa recently signed a deal with Celebrity Cruises to provide foie gras on high-end ships. Anyone can buy from Sousa's website, but the only place you can purchase his product in-person is at a family storefront in a tiny village called Fuente de Cantos, near the Spain-Portugal border.

Sousa takes me there, and just as we arrive, we meet a Spanish-American couple who've made a sort of pilgrimage there from San Francisco.

"We watched it on TED Talks and then I made [my boyfriend] stop here on the way to Madrid," says Alegra Cabellon. "I'm really excited to see the product."

She says she's a fan of Dan Barber, and wanted to taste the thing he couldn't stop raving about.

Cabellon takes a selfie with Sousa and buys several jars of his foie gras. She'll have to eat it before she heads home though. Customs rules won't allow her to bring it into the United States. This foie gras is sold, for now, in Europe only — but Sousa is awaiting a certificate to sell it in America soon.