Accessibility links
How Monsanto And Scofflaw Farmers Hurt Soybeans In Arkansas : The Salt A new type of genetically engineered crop is tempting farmers to use a weedkiller illegally. The illicit chemical use has damaged nearby crops and provoked conflict among neighbors.

How Monsanto And Scofflaw Farmers Hurt Soybeans In Arkansas

How Monsanto And Scofflaw Farmers Hurt Soybeans In Arkansas 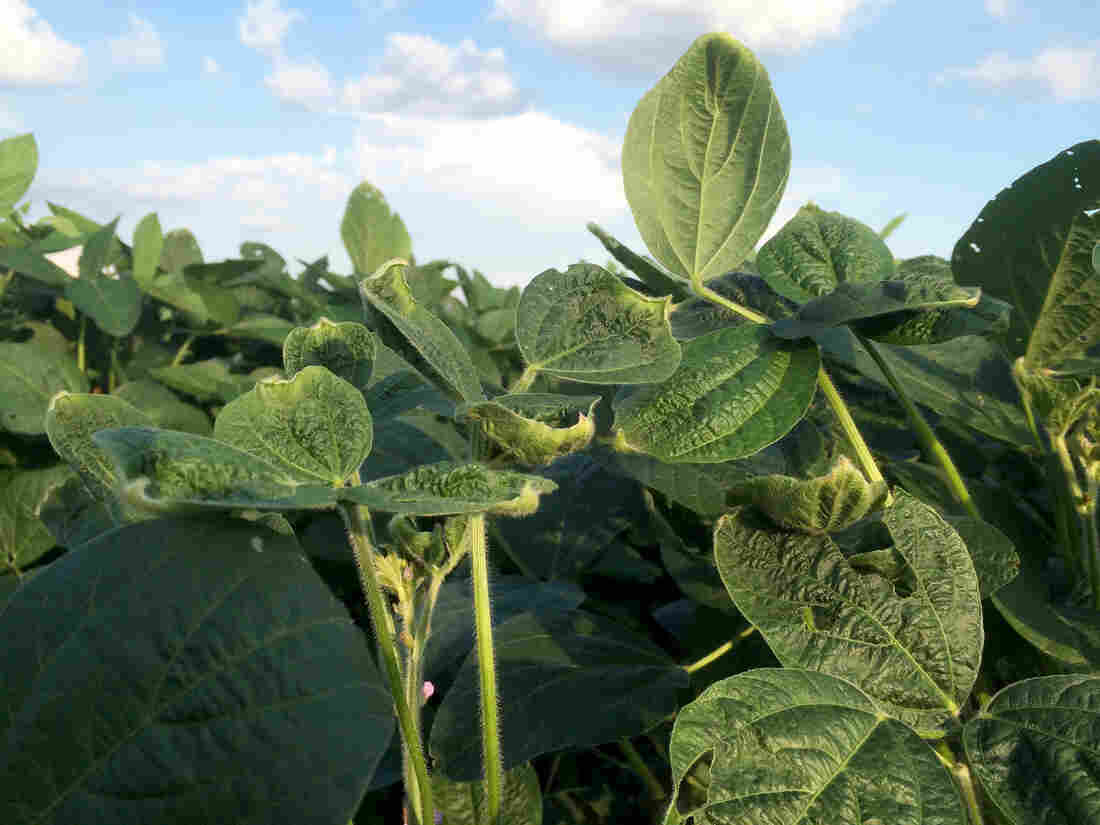 These soybean leaves show evidence of damage from dicamba. It could cut the the harvest by 10 to 30 percent. Courtesy of the University of Arkansas hide caption

toggle caption
Courtesy of the University of Arkansas 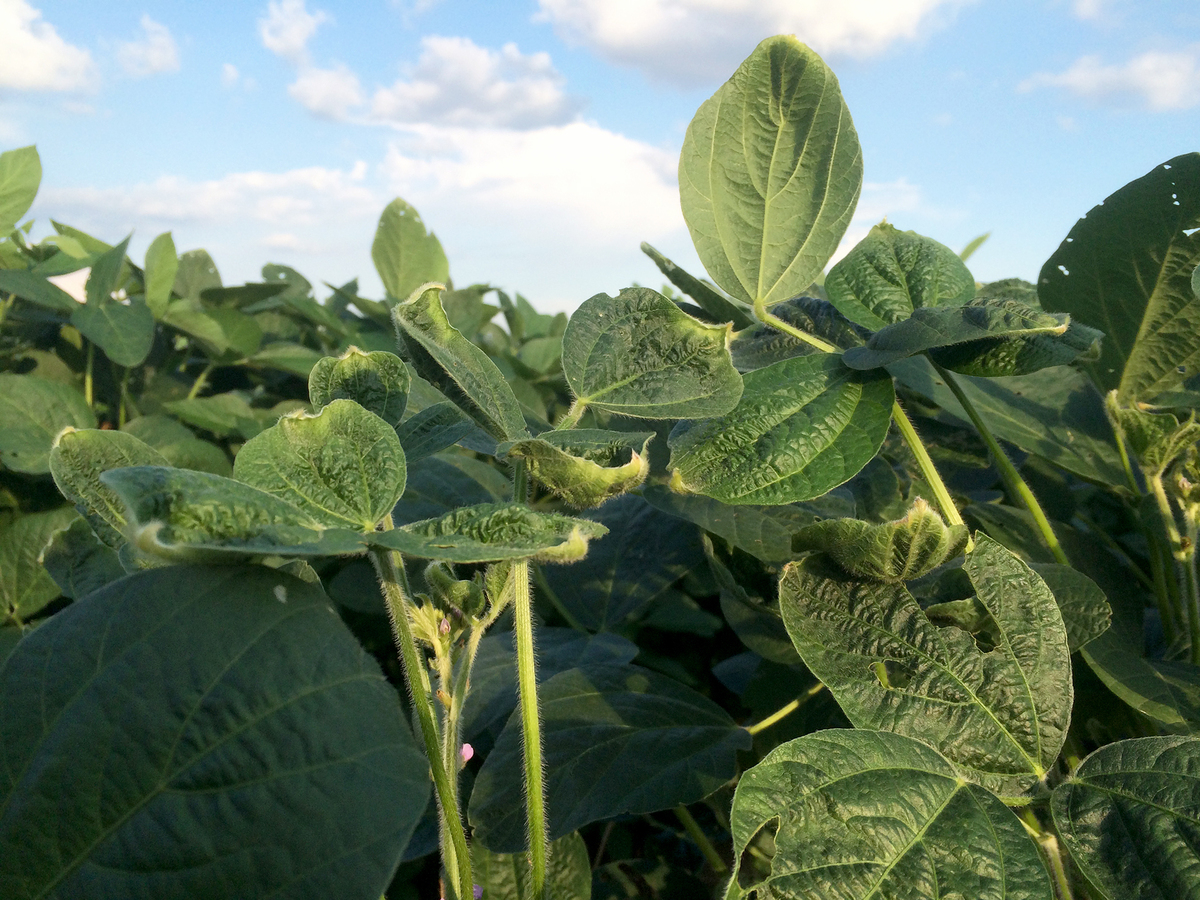 These soybean leaves show evidence of damage from dicamba. It could cut the the harvest by 10 to 30 percent.

Courtesy of the University of Arkansas

When Tom Barber, a scientist at the University of Arkansas who studies weeds, drives the country roads of eastern Arkansas this summer, his trained eye can spot the damage: soybean leaves contorted into cup-like shapes.

He's seeing it in field after field. Similar damage is turning up in Tennessee and in the "boot-heel" region of Missouri. Tens of thousands of acres are affected.

This is no natural phenomenon of weather or disease. It's almost certainly the result of a crime. The disfigured leaves are evidence that a neighboring farmer sprayed a herbicide called dicamba, probably in violation of the law.

Dicamba has been around for decades, and it is notorious for a couple of things: It vaporizes quickly and blows with the wind. And it's especially toxic to soybeans, even at ridiculously low concentrations.

Damage from drifting pesticides isn't unfamiliar to farmers. But the reason for this year's plague of dicamba damage is unprecedented. "I've never seen anything like this before," says Bob Scott, a weed specialist from the University of Arkansas. "This is a unique situation that Monsanto created."

The story starts with Monsanto because the St. Louis-based biotech giant launched, this year, an updated version of its herbicide-tolerant soybean seeds. This new version, which Monsanto calls "Xtend," isn't just engineered to tolerate sprays of glyphosate, aka Roundup. It's also immune to dicamba.

Monsanto created dicamba-resistant soybeans (and cotton) in an effort to stay a step ahead of the weeds. The strategy of planting Roundup-resistant crops and spraying Roundup to kill weeds isn't working so well anymore, because weeds have evolved resistance to glyphosate. Adding genes for dicamba resistance, so the thinking went, would give farmers the option of spraying dicamba as well, which would clear out the weeds that survive glyphosate.

There was just one hitch in the plan. A very big hitch, as it turned out. The Environmental Protection Agency has not yet approved the new dicamba weedkiller that Monsanto created for farmers to spray on its new dicamba-resistant crops. That new formulation of dicamba, according to Monsanto, has been formulated so that it won't vaporize as easily, and won't be as likely to harm neighboring crops. If the EPA approves the new weedkiller, it may impose restrictions on how and when the chemical may be used.

But, Monsanto went ahead and started selling its dicamba-resistant soybeans before this herbicide was approved. It gave farmers a new weed-killing tool that they couldn't legally use.

Monsanto says it did so because these seeds weren't just resistant to dicamba; they also offered higher yields, which farmers wanted. In an email to The Salt, Phil Miller, Monsanto's vice president for global regulatory and government affairs, wrote that "there's incredible value in the Xtend technology independent of herbicide applications: There is great demand for strong yield performance and our latest industry leading genetics." Monsanto says it also made it clear to farmers that they were not allowed to spray dicamba on these dicamba-resistant beans.

Farmers themselves, however, may have had other ideas. Robert Goodson, an agricultural extension agent in Phillips County, Ark., believes that some farmers were hoping that the EPA would approve the new dicamba weedkiller in the course of the growing season, so they'd get to spray it over their crops.

Or maybe some farmers secretly intended to violate the law, using regular old dicamba, even without EPA approval.

Farmers in this part of the country are struggling to control a weed called Palmer amaranth, also known as pigweed. Many of the weedkillers they've used in the past don't work anymore. Weed expert Bob Scott says they're desperate for new tools. "If we didn't need this so bad, we wouldn't be having this conversation," he says.

"Maybe in the back of their mind they thought, 'Well, I'm not going to hurt anything if I do [spray dicamba],' " says Tom Barber. "Some of these guys may have thought they didn't have an option, they had to use dicamba or they'd lose the crop. I don't know what they were thinking."

Whatever the original motivation for buying Xtend seed, some scofflaw farmers did try to take advantage of it by spraying dicamba on their soybean fields. Swaths of vulnerable soybeans on neighboring fields are showing the damage. "There's a tremendous amount of injury on soybean fields," says Barber. There also are reports of damage to vegetable crops.

Barber says farmers whose fields are damaged are especially angry, because they're already under economic stress because of low crop prices. "They see their soybeans out there all cupped up and stunted, their reaction is not good," Barber says. "We've seen cases of herbicide drift before. Usually the farmers work it out among themselves. But it's getting to the point now, it's made a lot of farmers upset with their neighbors. It's an unfortunate thing."

More than 100 farmers in Missouri have filed formal complaints with the state's Department of Agriculture. In Arkansas, 25 complaints have been filed. If investigators decide that a farmer has sprayed dicamba illegally, the farmer can be fined. In Arkansas, the maximum fine for a violation is $1,000, but "our fines aren't stopping them," says Susie Nichols, who is in charge of pesticide regulation for Arkansas. State regulators are considering raising that to $5,000 or even more.

Nichols says the Arkansas Plant Board also is considering new regulations that could drastically restrict the use of dicamba, even if the EPA does approve the use of Monsanto's new and reformulated version.

Weed scientists from the University of Arkansas believe that the new version of dicamba also could damage nearby soybean fields. So if any farmers are permitted to use it on soybeans, other farmers may be forced to buy Monsanto's dicamba-resistant soybean varieties just to protect themselves.

There's one final and, for farmers, unwelcome twist to this story. If they do manage to limit dicamba's collateral damage, and start to use it widely, there's new evidence that the chemical may quickly become ineffective.

Jason Norsworthy, a weed expert at the University of Arkansas, wanted to see if pigweed could evolve resistance to dicamba. In a greenhouse, he sprayed pigweed plants with light doses of dicamba — not enough to kill most of the plants, but enough to give an advantage to any individual plants that might be slightly resistant to the herbicide. He recovered seeds from surviving plants and repeated the process. After just three generations, he found pigweed plants that were able to survive full-dose sprays of dicamba. Most likely, the same process would occur rather quickly in field conditions, leaving farmers once again desperate for a new solution to their pigweed problem.

Extension agent Robert Goodson says that in the long run, farmers in Arkansas may be forced to take a different approach to managing weeds, probably by growing different crops. Instead of soybeans, farmers may grow more sorghum, rice or other crops.