Accessibility links
Breadfruit, A Tropical Superfood, Could Help The World's Hungry Tropics : The Salt Packed with nutrients, easy to grow and adaptable to local cuisines, this tropical superfood could bring more food and cash to poor farmers around the world. 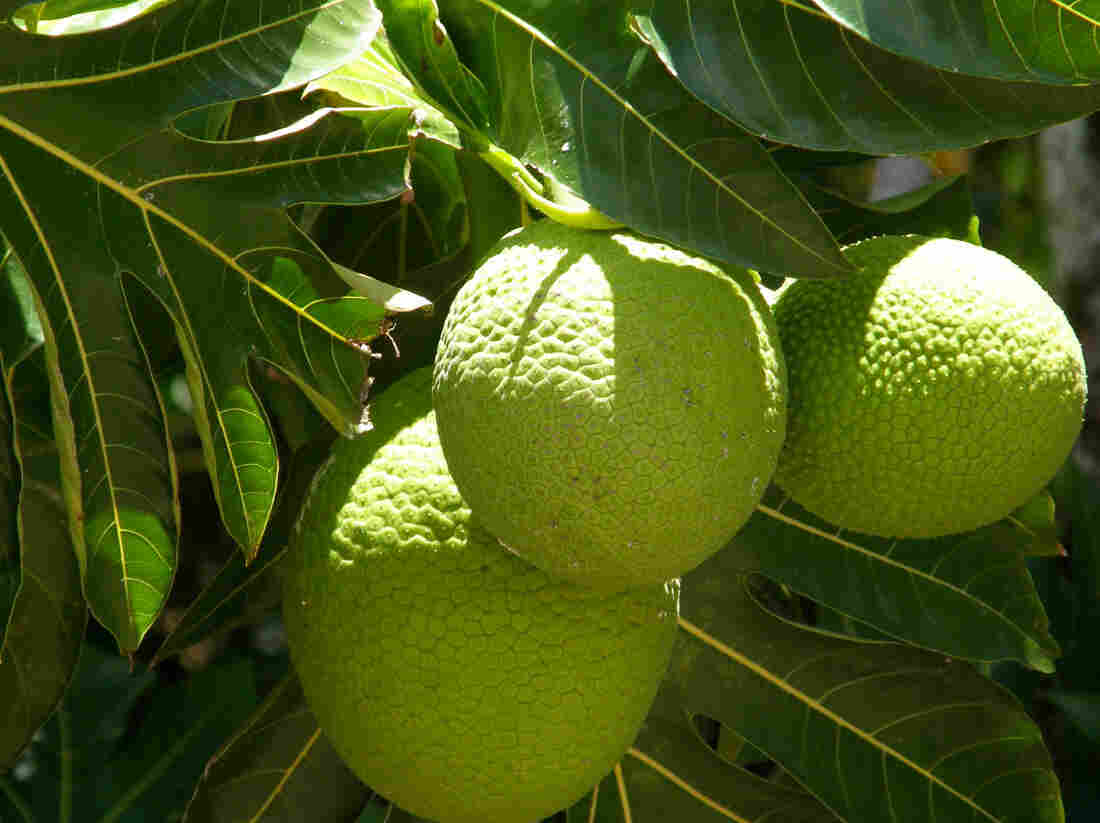 Breadfruit is a protein and nutrient-rich staple in Hawaii and other islands in the Pacific Ocean. Malcolm Manners/Flickr hide caption 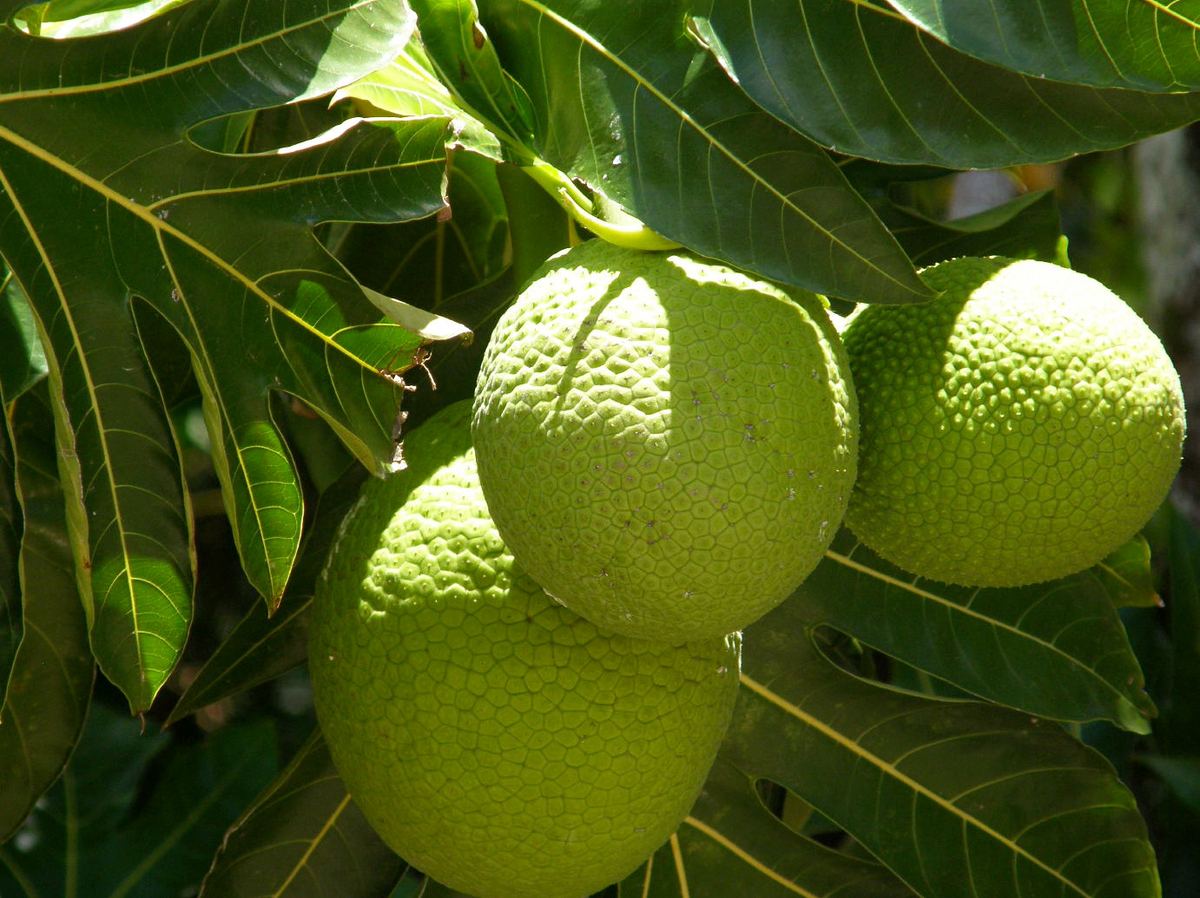 Breadfruit is a protein and nutrient-rich staple in Hawaii and other islands in the Pacific Ocean.

On a muggy morning on Kauai's south coast, ethnobotanist Diane Ragone inspects a dimpled bright green orb, the size of a cantaloupe. She deems the fruit mature, at its starchy peak. Perfect for frying or stewing.

"You can eat breadfruit at any stage," says Ragone, who heads the National Tropical Botanical Garden's Breadfruit Institute. "When it's small and green, it tastes like an artichoke. When it's starchy and mature, it's the equivalent of a potato. When it's soft and ripe, it's dessert."

A traditional staple in Hawaii, breadfruit is sometimes called the tree potato, for its potato-like consistency when cooked. Except breadfruit has higher-quality protein and packs a healthy dose of vitamins and minerals.

That's why Ragone has spent years trying to cultivate this nutrient-rich staple for poorer, tropical parts of the world, where the majority of the world's hungriest people live.

Breadfruit offers several advantages over other staples, says Ragone. The fast-growing perennial trees require far less labor, fertilizer and pesticides than crops like rice and wheat. They're also more productive. A single tree yields an average of 250 fruits a year and can feed a family for generations. 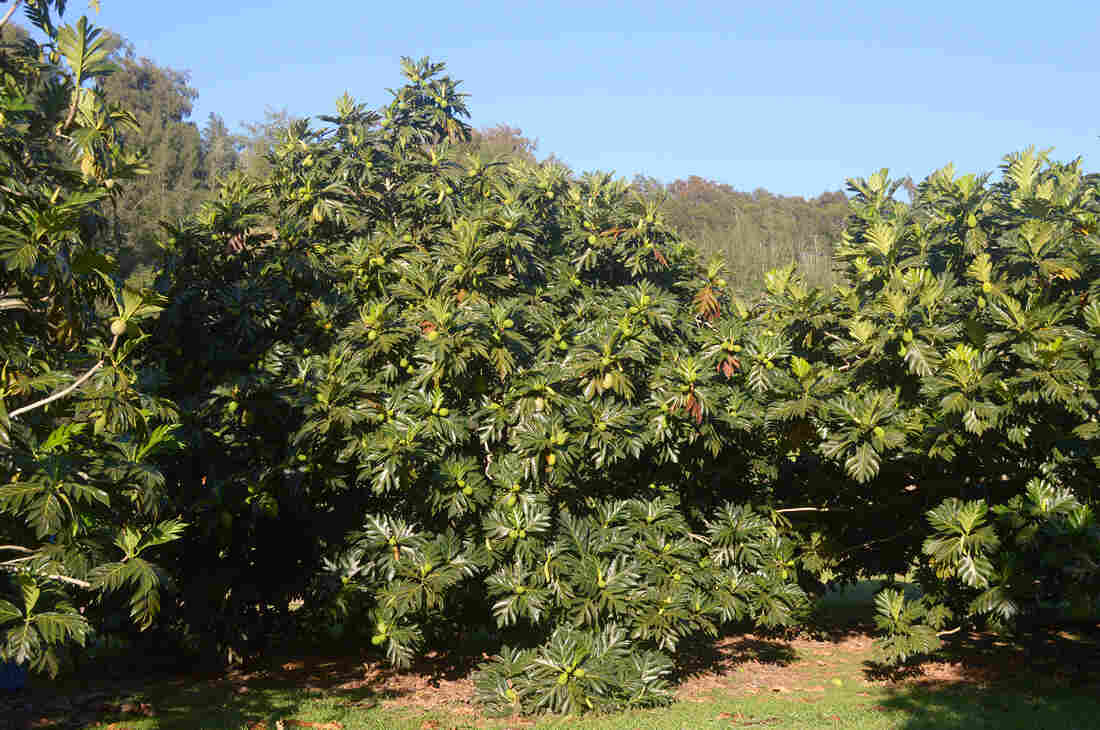 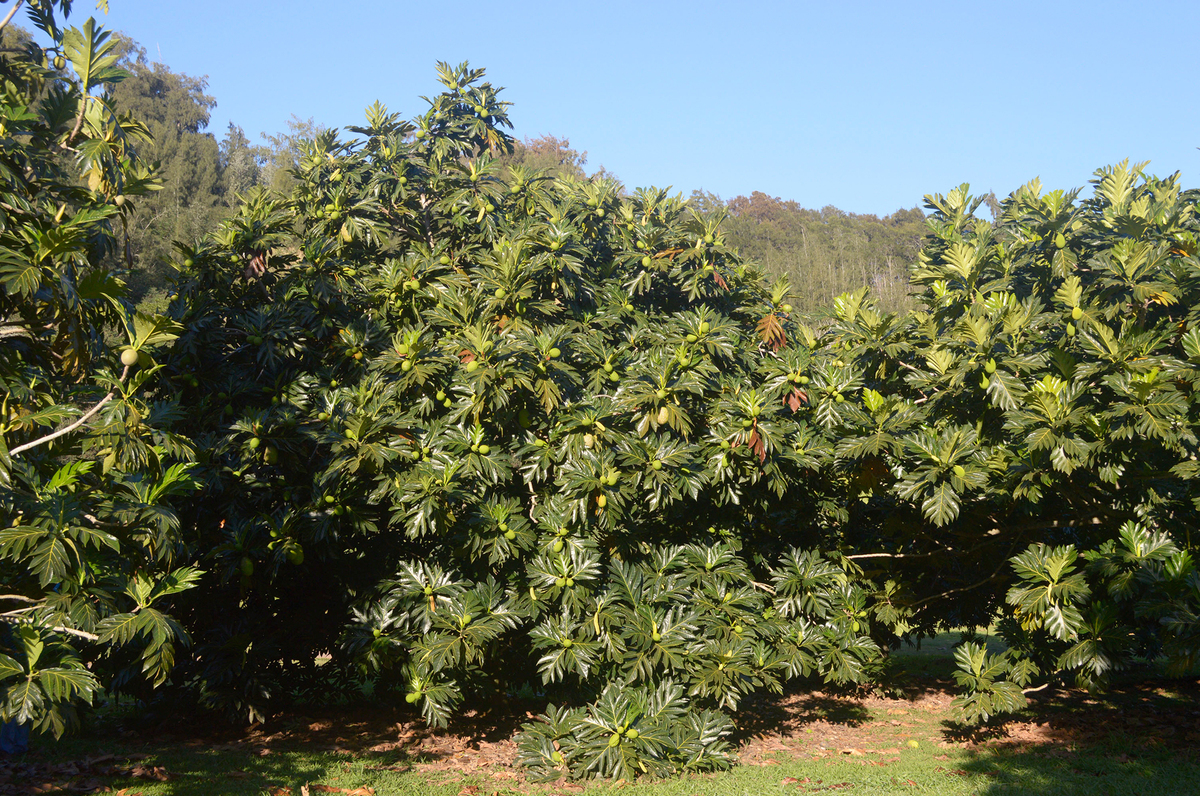 Breadfruit trees in fruit at the National Tropical Botanical Garden in Hawaii, where scientists have developed newer, hardier varieties of breadfruit.

If mass produced, breadfruit could provide a steady source of nutritious food for farmers and their families, and supplement their incomes.

That's already starting to happen. Farmers in countries like Samoa, Haiti and Nigeria are already growing some of the varieties developed by Ragone's team.

The wild ancestor of breadfruit is native to New Guinea and cultivated throughout the Pacific Islands, where it has been a staple for as long as people can remember. It's part of a diet that helped residents avoid malnutrition, obesity and diabetes until a few decades ago, when people abandoned their traditional foods.

Ragone has collected hundreds of varieties of breadfruit throughout the Pacific archipelagoes and is selecting ones with the best flavors, nutritional profiles and longest growing seasons.

"Looking at how well-fed Pacific Islanders have been for millennia, we asked how can we expand the use of breadfruit," Ragone says.

Last year, she and her research partner, Susan Murch at the University of British Columbia, analyzed the protein content of 49 breadfruit cultivars to identity high nutrient varieties for mass propagation. Each had the full suite of essential amino acids, and one — a Samoan cultivar called Ma'afala — surpassed even soybeans.

Ma'afala, which is popular in Hawaii, is one of five varieties that Ragone's team now grows on a commercial scale.

In 2009, Josh Schneider, who runs a worldwide ornamental plant business, launched Global Breadfruit to grow and distribute the trees on a global scale. Nearly 83,000 trees are now growing in 40 countries, including 14,000 that Schneider and his partners delivered this year to 10 countries, including Cuba and Guyana.

But introducing novel foods to combat hunger can be tricky. For example, when nutritional scientist Kara Bresnahan went to Zambia, where traditional maize is white, she found that people were reluctant to try maize fortified with vitamin A because it was orange, like the corn they fed their animals. "The hardest thing is finding something that's culturally appropriate," Bresnahan says. 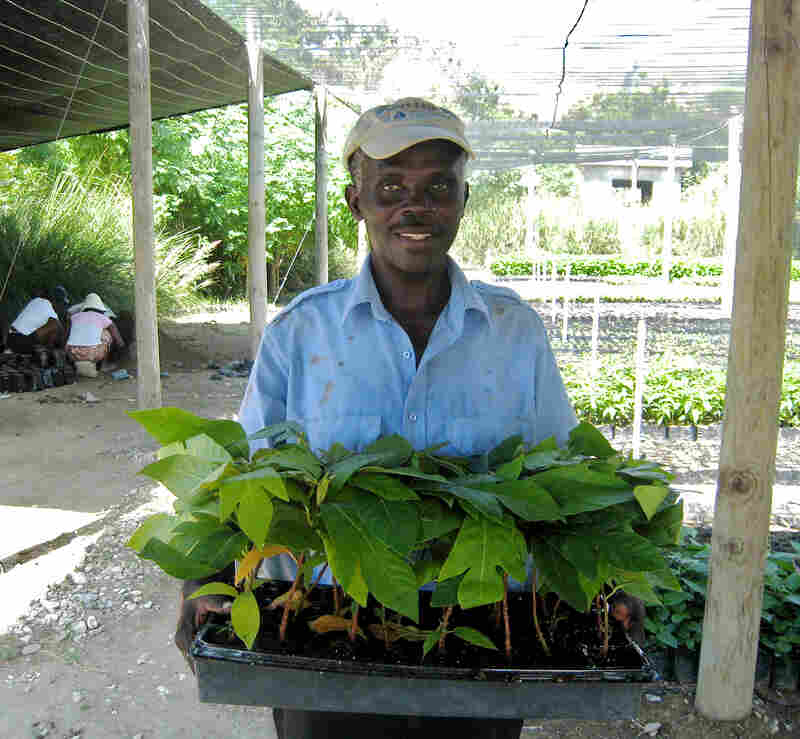 A Haitian man with a flat of breadfruit saplings delivered by the organization, Global Breadfruit. Diane Ragone/Courtesy of the ARN Foundation hide caption 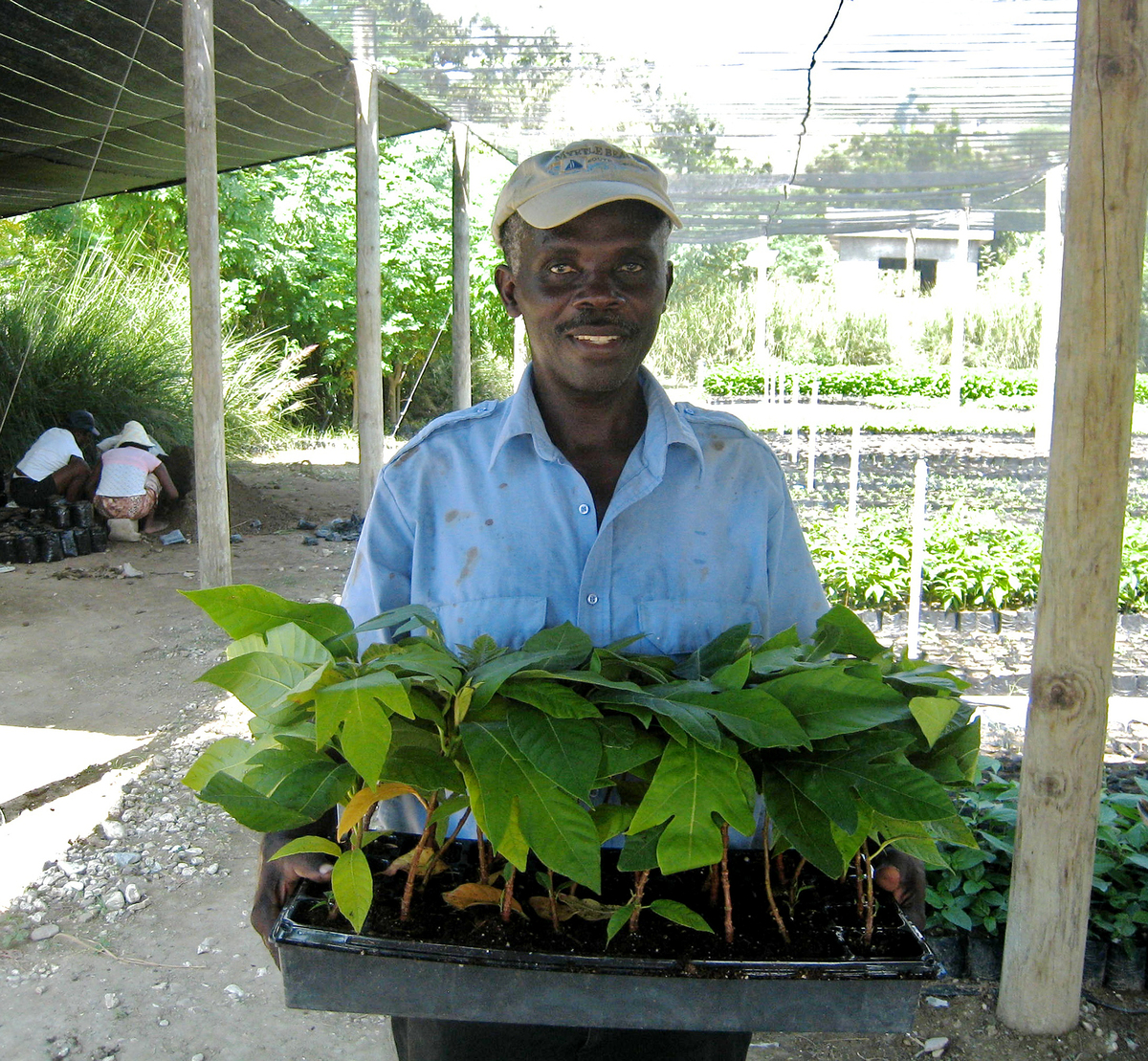 A Haitian man with a flat of breadfruit saplings delivered by the organization, Global Breadfruit.

Diane Ragone/Courtesy of the ARN Foundation

That's where breadfruit has an advantage, says Schneider. Most of the farmers he works with were already aware of breadfruit as a crop. "People have been very open to breadfruit and creative at incorporating it into their traditional cuisines and adapting it to their needs."

Costa Rican native Diana Chaves has distributed thousands of Schneider's breadfruit trees in her home country. Last February, she launched Jungle Foods to sell breadfruit chips. Most of the stores, markets and farmers markets that she contacted to offer her product hadn't heard of breadfruit at all, she says.

You can sing along or dance to this catchy song about breadfruit by Jamaican musician Chi Ching Ching.

So she explained how grocers could support small farmers by selling the chips. "After the first crunchy bite a big smile will appear on their faces," she says. Most people agreed to sell the products, exceeding her supply. "Now at the farmers market, people ask, 'when will the chips be ready?'"

It was important to create a market for the chips before encouraging farmers to produce large harvests, says Chaves. Jungle Foods just signed a contract with 30 farmers, she says.

"No crop is a silver bullet when it comes to food security and hunger," says Valeria Tuia, who coordinates traditional genetic resources for the intergovernmental organization Secretariat of the Pacific Community. "However breadfruit can be grown to support food security, including hunger in some of those countries that need food in addition to other crops."

And breadfruit's high productivity also allows them to support a range of breadfruit-based products from chips to flour for export.

Breadfruit flour entrepreneurs in Hawaii, Samoa and Jamaica will soon have a chance to sell their products to U.S. consumers. In February, the FDA ruled breadfruit flour safe for use, based on extensive safety tests done in Murch's lab. Flour made out of breadfruit, and products containing it, could hit U.S. shelves as soon next year.

The timing for the FDA ruling couldn't be better, Murch says. Over the past six months, she's seen "massive excitement" about breadfruit in Jamaica. Jamaican musician Chi Ching Ching even recorded a song about breadfruit. "It's No. 1 on the charts," she says.

Editor's Note: Breadfruit has long been a staple in Jamaican cuisine. The "massive excitement" about breadfruit in the country refers to people's recent excitement about the entrepreneurial potential of breadfruit products.

A previous version of the story referred to Chi Ching Ching as a reggae band. He is in fact a dance hall musician.