Accessibility links
Water Ice, Philly's Classic Summer Cooler, Gets Hot Across The Country : The Salt This classic Philadelphia dessert used to be hard to find outside the city. Not anymore. 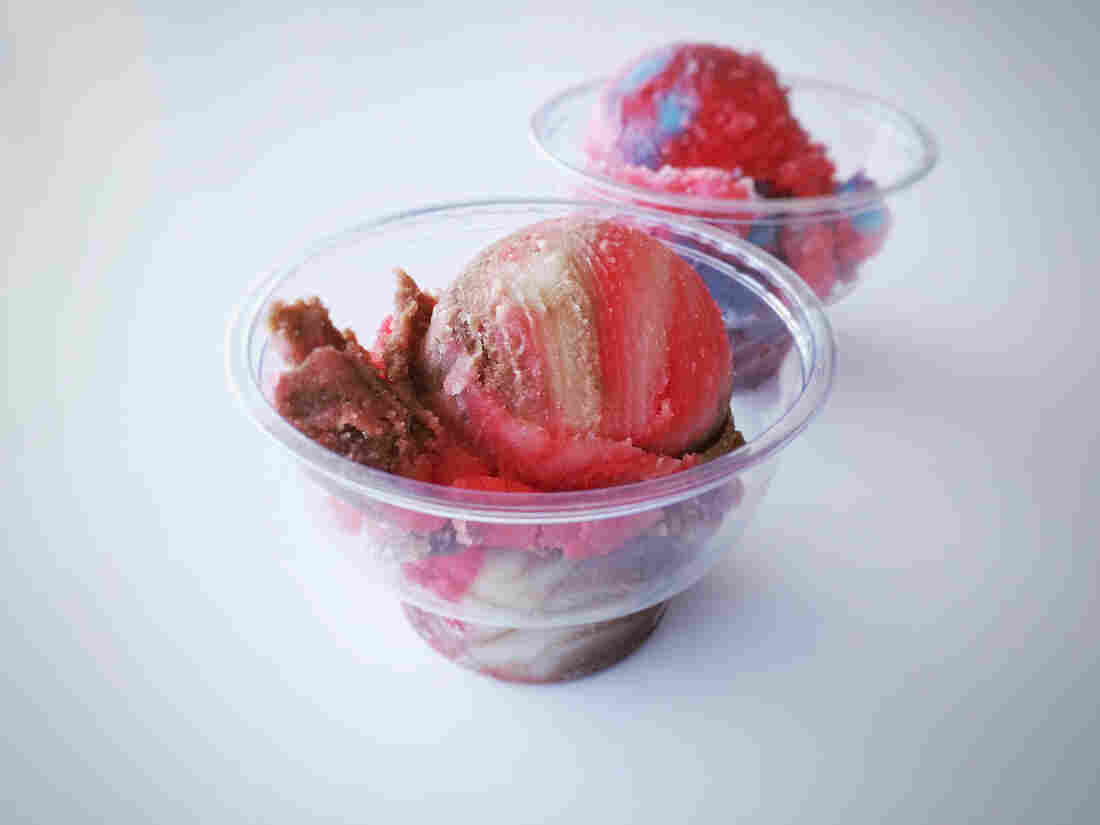 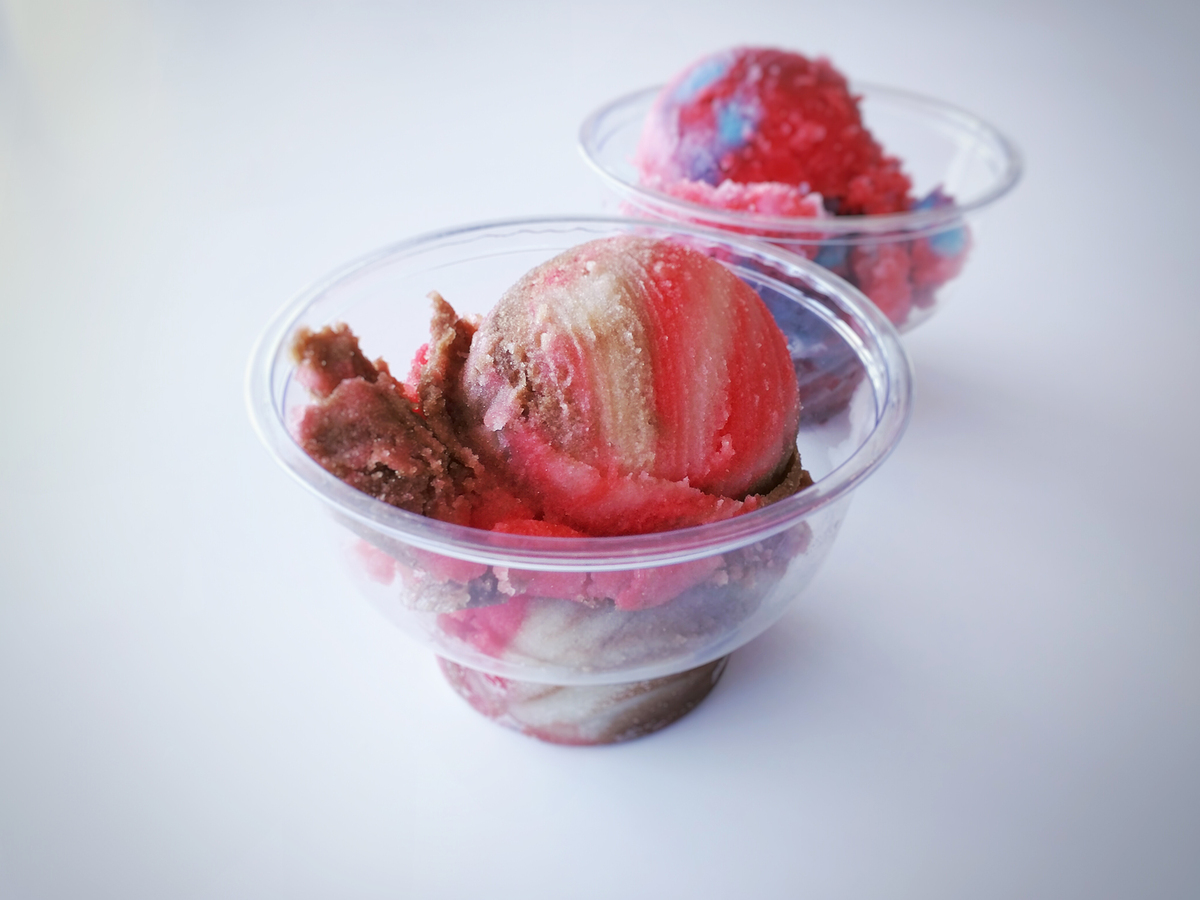 Water ice, better known as Italian ice, is an iconic summer treat in the Philadelphia area.

I grew up in the Philadelphia area, where water ice is as iconic a summer dessert as ice cream cones and Popsicles. Maybe more so.

It's a frozen treat made from water, sugar and some sort of flavoring — usually fruit. It is firmer than a slushy, softer than sorbet and smoother than granita. Unlike with a snow cone, the flavor is mixed in before freezing, instead of being poured over a frozen ball at the end. You might know it as Italian ice, but it bears little resemblance to the hard, frozen variety you find in supermarket freezers.

For more than a century, Philadelphians have been cooling themselves down with this icy dessert. As a kid, I assumed the rest of America was doing the same.

Then I moved to San Francisco and, eventually, Boston, and found my water ice options severely limited. If there were shops selling water ice in those cities, I never saw them. And I was looking.

Today, thanks in part to the chain Rita's Italian Ice, water ice is steadily spreading across the country. Founded by a retired Philadelphia firefighter named Bob Tumolo, Rita's began as a small store in Bensalem, Pa., in 1984. It now has more than 600 stores selling the dessert from California to Georgia and Minnesota to Texas. 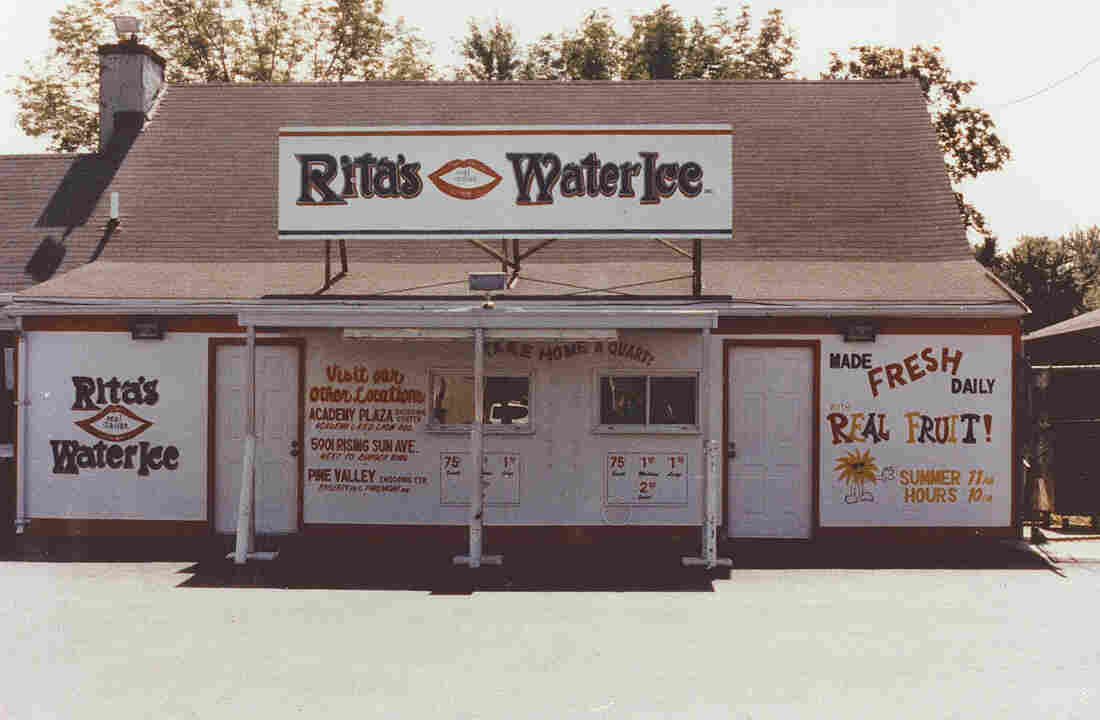 The original Rita's Water Ice in Bensalem, Pa. Now there are over 600 Rita's stores selling water ice and other desserts across the country. Courtesy of Rita's Italian Ice hide caption 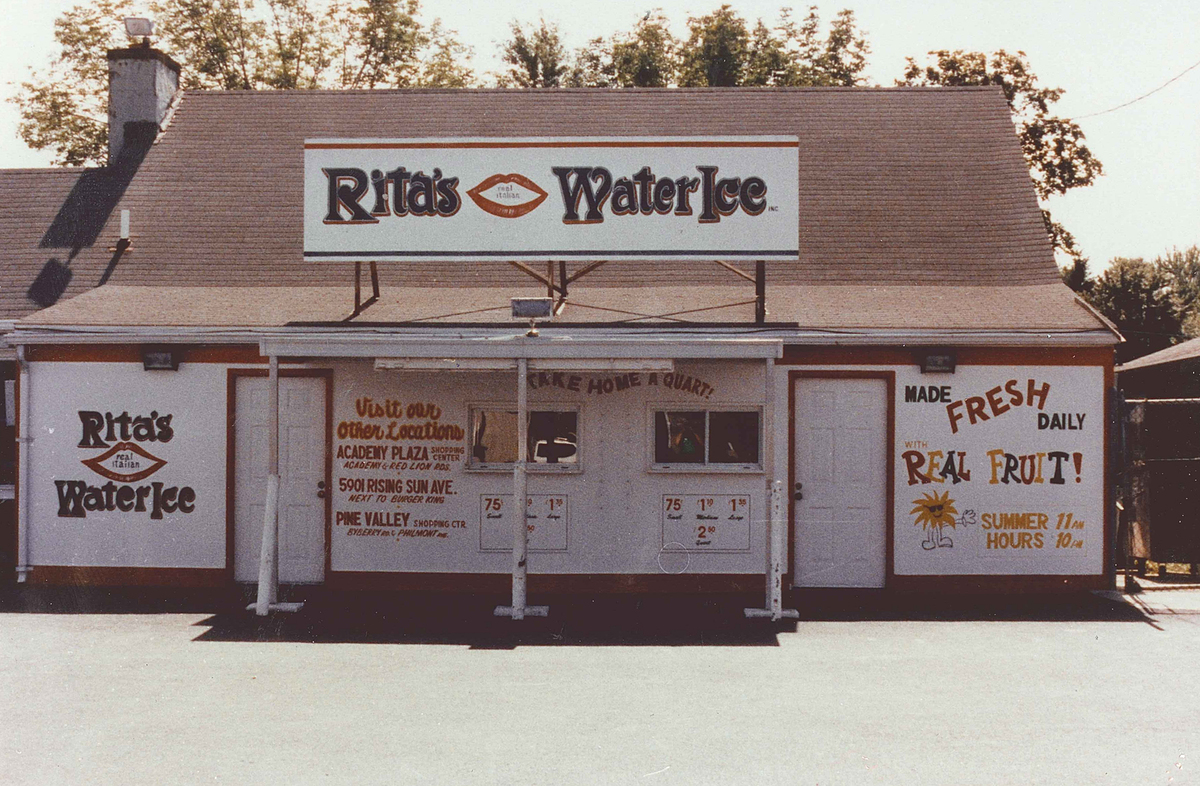 The original Rita's Water Ice in Bensalem, Pa. Now there are over 600 Rita's stores selling water ice and other desserts across the country.

Making this simple-sounding dessert requires a rather precise process. First, the ingredients are poured into a metal vessel that is chilled from the outside, just like an ice cream machine. As the metal gets cold, the water in the mixture starts to freeze on the metal walls and form little ice crystals. Meanwhile, a tool called a dasher rotates around, scraping the crystals off the wall.

"The ice crystal is pure water," says John Coupland, professor of food science at Pennsylvania State University. "If you looked at Italian ice under a microscope, you'd see lovely crystals of ice sitting in a soup of water, color and flavorings."

The trick to creating water ice with a smooth consistency is making sure that half the water that goes into the mixture forms ice crystals, says Coupland.

Rita's CEO, Jeff Moody, credits Tumolo with developing machines that reliably produce water ice with a consistent texture. And many of Rita's stores around the country are run by Philadelphians, Moody says. "They bring [water ice] with all that passion to their new geography."

Moody says stores outside the Philly area do well, but there are regional differences in customer's preferences. Chocolate water ice is popular in Philadelphia. Mango is popular everywhere.

Introducing people outside Philadelphia to water ice can be an uphill battle. The trick is to not call it by that name, says Jason Mandler, now owner of Carmen's Italian Ice & Cafe in Rockville, Md. "People look at you like you're crazy if you call it water ice here," he says. 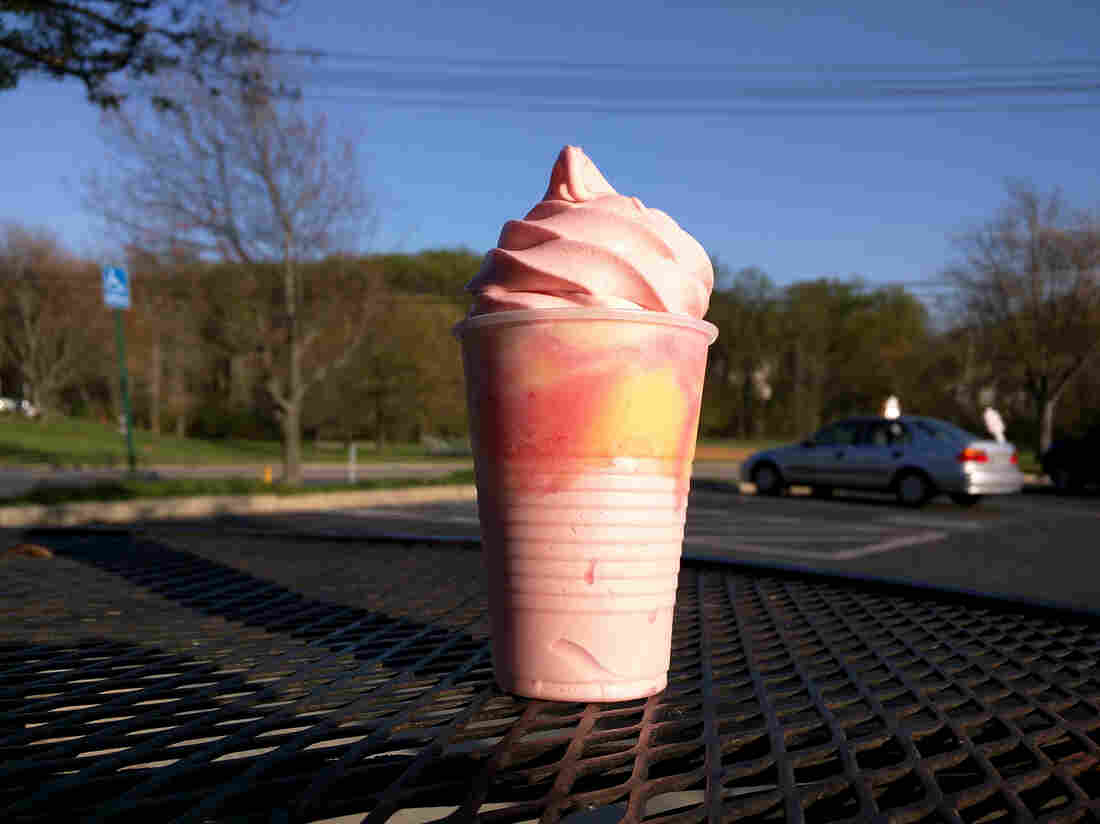 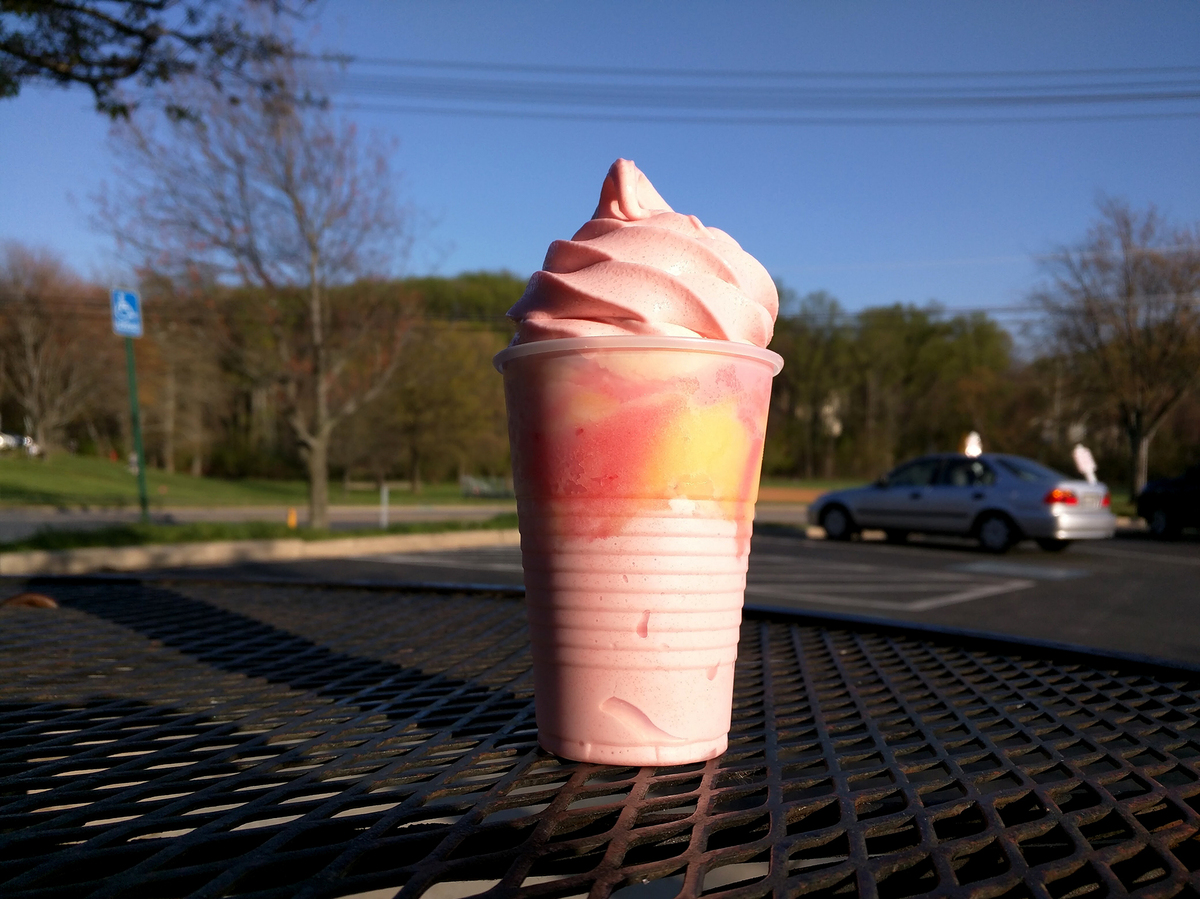 Carmen's Italian Ice & Cafe offers the dessert in a range of flavors in Rockville, Md.

Mandler grew up in New Jersey, not far from the center of water ice fandom. When he opened his first store in Maryland, in 2001, there was no water ice to be had near D.C.

"Nobody around here knew what water ice or Italian ice was," he says. "People were very skeptical."

To win them over, Mandler relied on three things: Philly-area transplants, free samples and coffee.

At first, locals just wanted coffee. So, Mandler added a cafe to his business plan.

"If they come in at 8 in the morning to buy coffee," he says, "then I can tell them they should come back later to buy Italian ice with their kids." And they did.

Fifteen years later, Carmen's has made Rockville a water ice stronghold. In the summer, Mandler produces 50 to 60 gallons each day, and says teenagers in the neighborhood, much like many generations in Philly, have grown up with Italian ice.

On a recent visit to Carmen's, I met Katherine Mulholland, a 17-year-old after my own heart, who eats Italian ice at least once a week in the summer. When did she first get a taste?

"I don't know," Mulholland says. "I've been going to Carmen's as long as I can remember." She recommends the piña colada flavor. I suggest banana.