Accessibility links
The Gold-Hungry Forty-Niners Also Plundered Something Else: Eggs : The Salt When food shortages struck San Francisco, wily entrepreneurs raided the dangerous Farallon Islands for protein-rich eggs from seabirds. In the process, they destroyed both wildlife and each other. 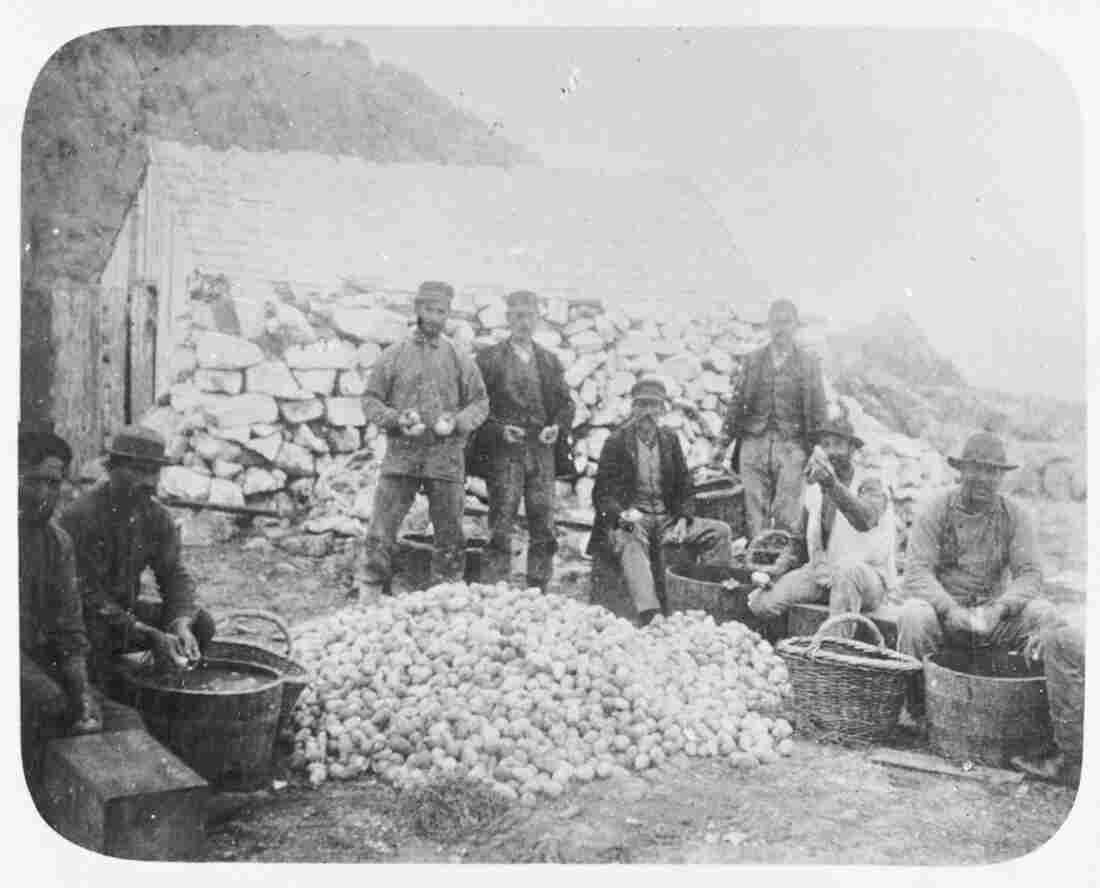 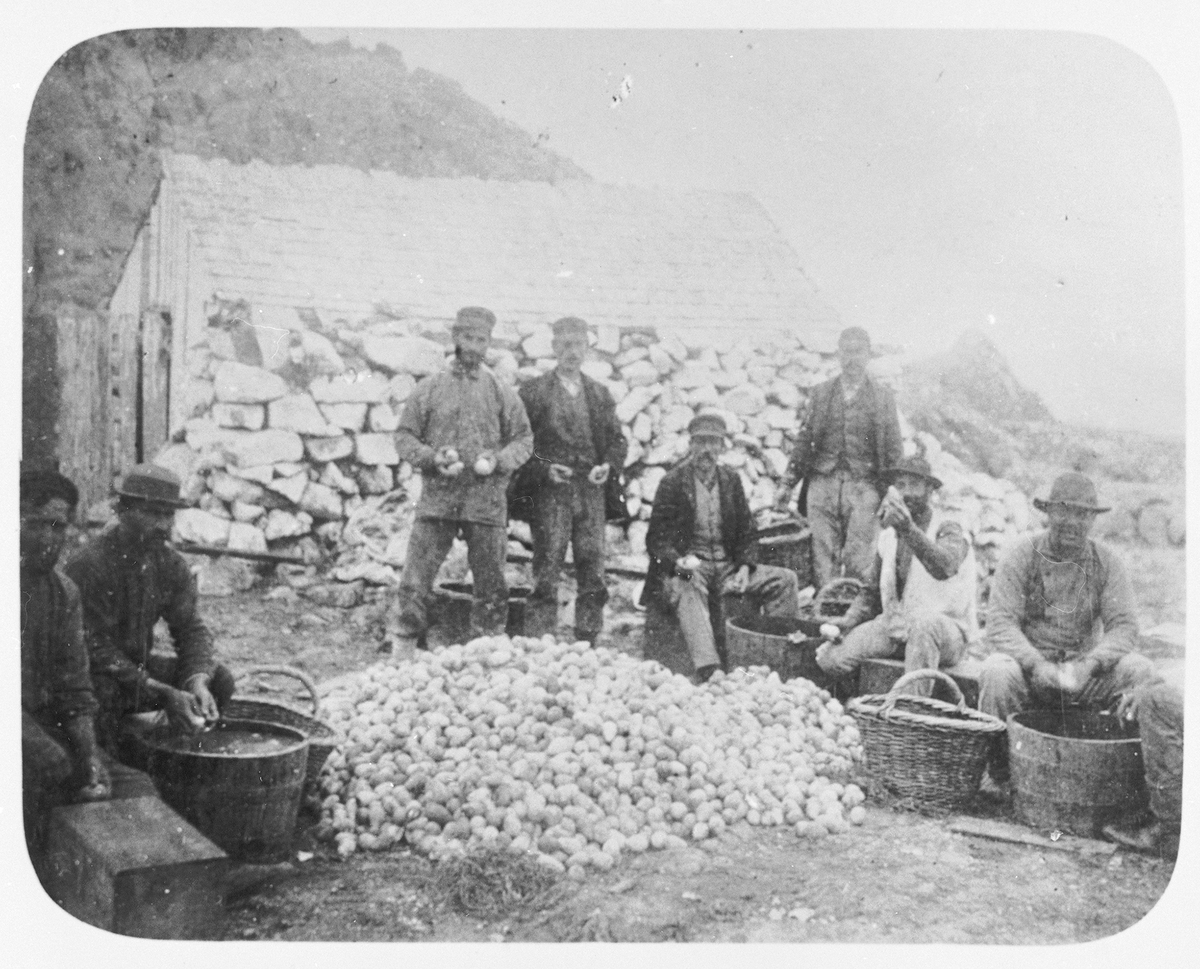 A group of men clean a week's haul of seabird eggs.

You've heard of the San Francisco gold rush. But that rush spurred another, lesser-known event: the egg rush. The legions of miners who swept into the region in the 1850s hoping to strike gold all had to be fed. And they needed protein to stay strong. But when food shortages hit, wily entrepreneurs looked for eggs in an unlikely source: the Farallon Islands.

Completely isolated and surrounded by great white sharks and sea lions, "the Farallon Islands are the most forbidding piece of real estate to be found within the city limits of San Francisco," says Gary Kamiya, a journalist and author of Cool Gray City of Love: 49 Views of San Francisco. "The islands are 28 miles outside the Golden Gate in extremely turbulent, dangerous seas."

This is the fifth in a series of stories from The Kitchen Sisters about the role food plays in resolving or creating conflict around the world. Read more stories in this series, and explore their previous tales of Hidden Kitchens.

But these rocky, skeletal islands did have one attractive quality for gold miners: They harbored the largest seabird rookery in the contiguous United States, and therefore were rife with plenty of protein-rich eggs.

Getting these eggs wasn't easy. The islands "look like a piece of the moon that fell into the sea," says Mary Jane Schram of the Gulf of the Farallones National Marine Sanctuary. "There are really no shores where you can land a small boat except with great perils."

Between 1849 and 1854, thousands of fortune-hunters flooded into San Francisco from all over the world. Kamiya describes the city as a combination of casinos, campgrounds and brothels. 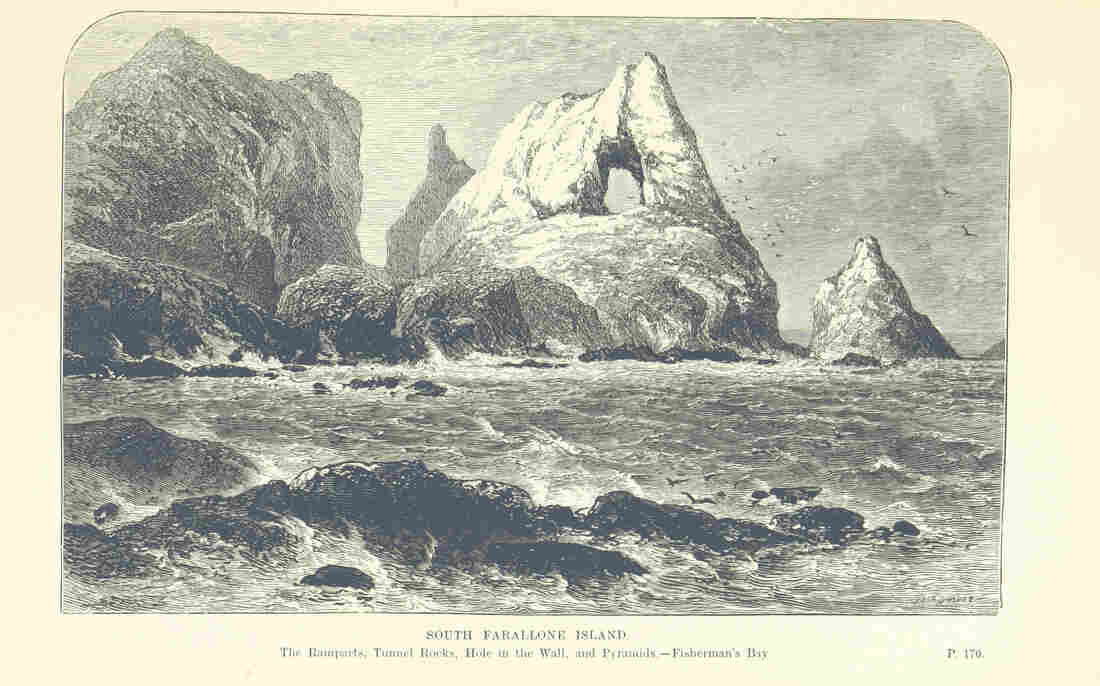 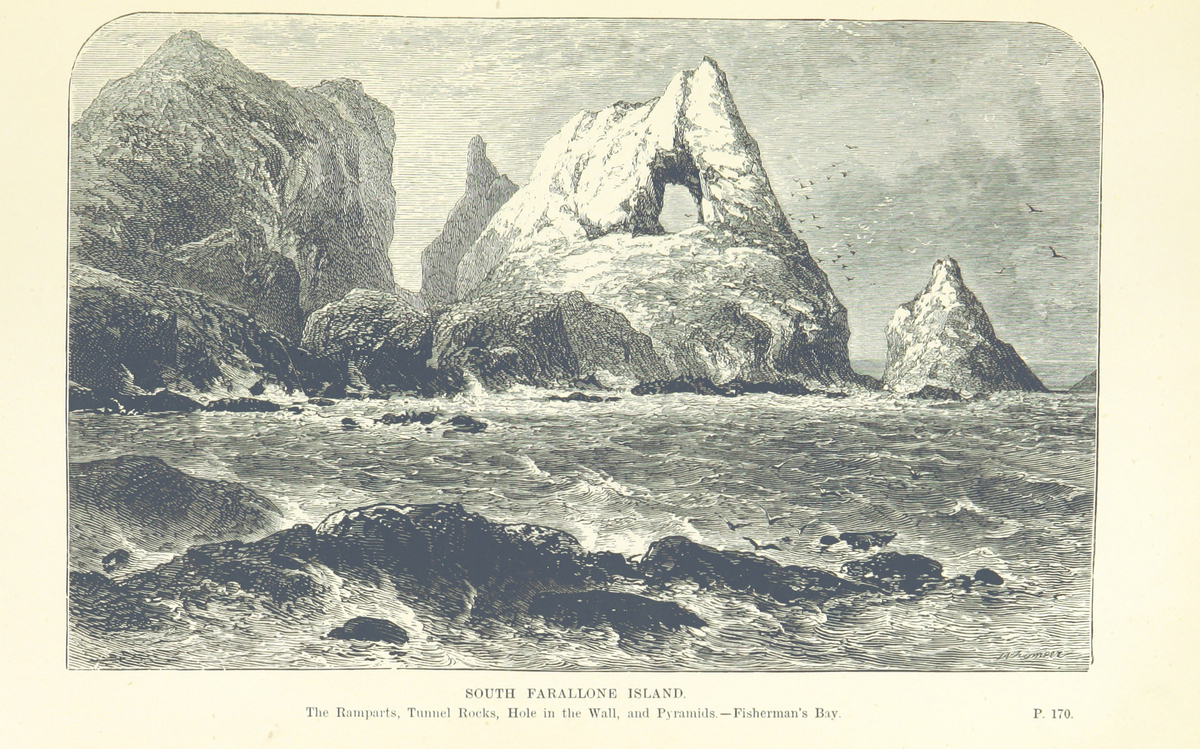 "Early on, some shrewd forty-niners began to realize that there was more money to be made mining the miners than there was in mining the gold fields," Kamiya says. Dozens of crude eating joints sprang up around the city, and hundreds of voracious miners would crowd into tents, eating in shifts. "The egg was one of the foodstuffs that was in such short supply."

Eva Chrysanthe, an artist and chronicler of the history of the Farallones, describes San Francisco at this time as a "protein-hungry town." What few chickens there were had been devoured, she says, and people were foraging. "After you wipe out all the bird nests on shore, then you go out to the Farallones."

The first egg entrepreneur was Doc Robinson, a pharmacist. He and his brother-in-law, Orin, would sail out to the Farallon Islands and haul back dozens of murre eggs, which they would then sell to restaurants and grocery stores.

The work was "tough, dirty and dangerous," says Kamiya. "The murres lay their eggs up on these towering, steep cliffs — higher than Nob Hill."

And though Robinson and his brother-in-law were able to poach $3,000 worth of eggs, they had "no interest in going back. It was a hellish experience," says Crysanthe.

But the idea took hold: Robinson's egg business kicked off the "egg rush." 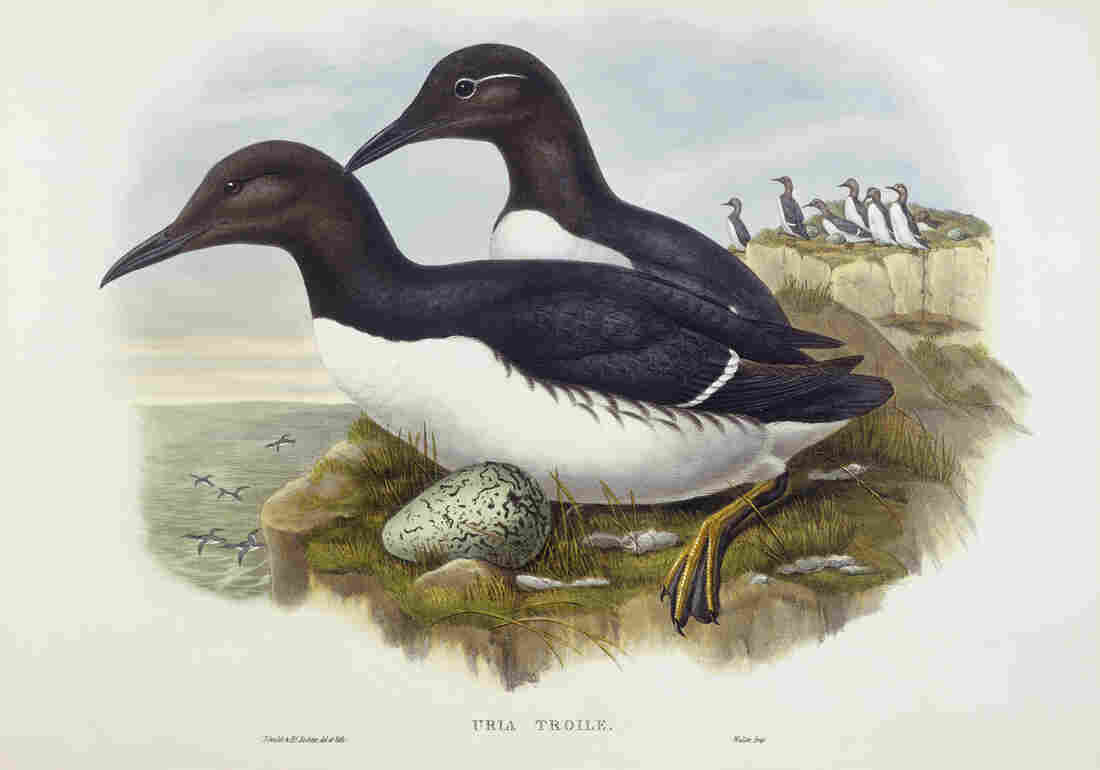 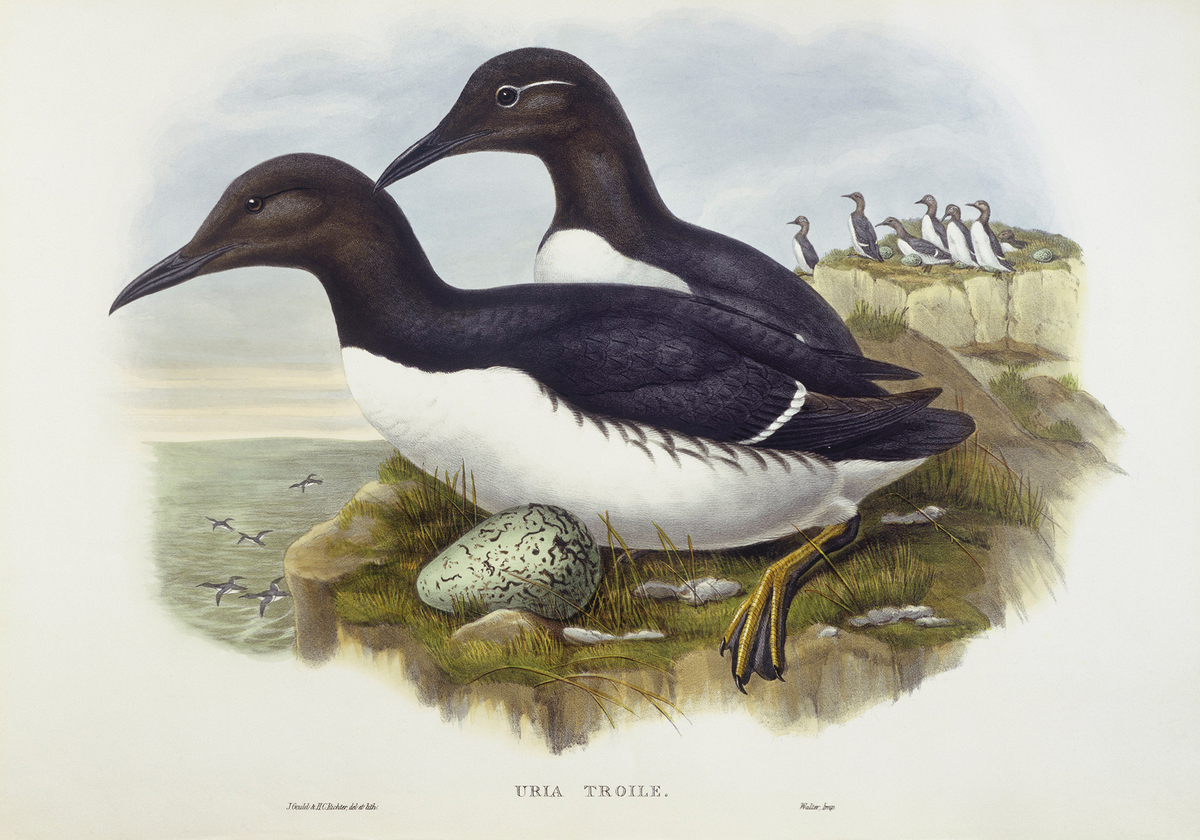 The eggs of the common murre — a penguin-like bird — were the most sought-after, most delectable on the Farallones. Strange, beautiful, blue-speckled and pointy-tipped, they are about twice the size of chicken eggs.

When fried, "the white of the murre egg stays clear and gelatinous. The yolk is deep reddish, and very unappetizing to look at," says Keith Hanson, a bird illustrator.

In 1851, six men formed the Pacific Egg Co., which claimed exclusive rights to the islands, says Peter White, author of The Farallon Islands: Sentinels of the Golden Gate. In May, when the birds first began to lay, the company would land 10 to 30 men, mostly Italian and Greek, on the Farallones' talus-filled shores. They came in little rowboats — in itself a test of stamina.

Kamiya is amazed at the derring-do of these men: "They'd send the men up to these sheer guano-stinking cliffs, being attacked by swirling gulls. These were rough-necked guys, waterfront types, climbing up and pushing eggs into their special egg pockets in their egg shirts." 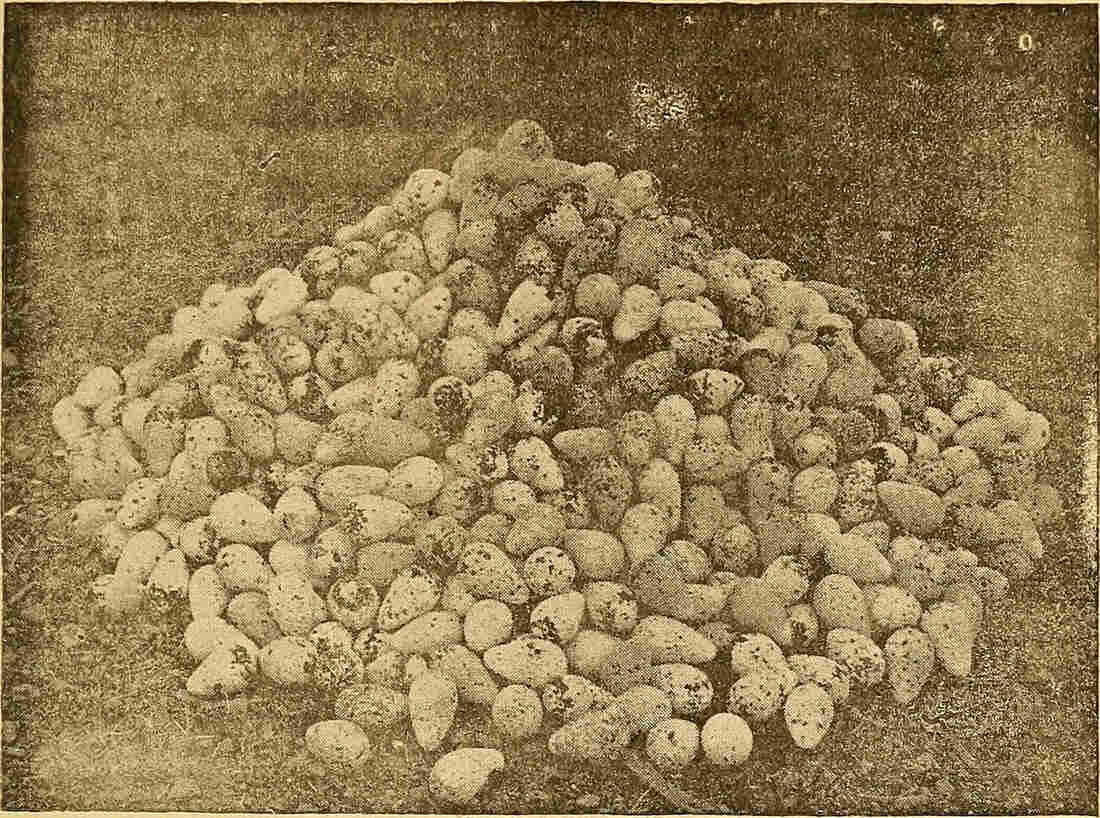 Eggs of the common murre collected from the Farallon Islands in the 1880s. Smithsonian Libraries/Flickr hide caption 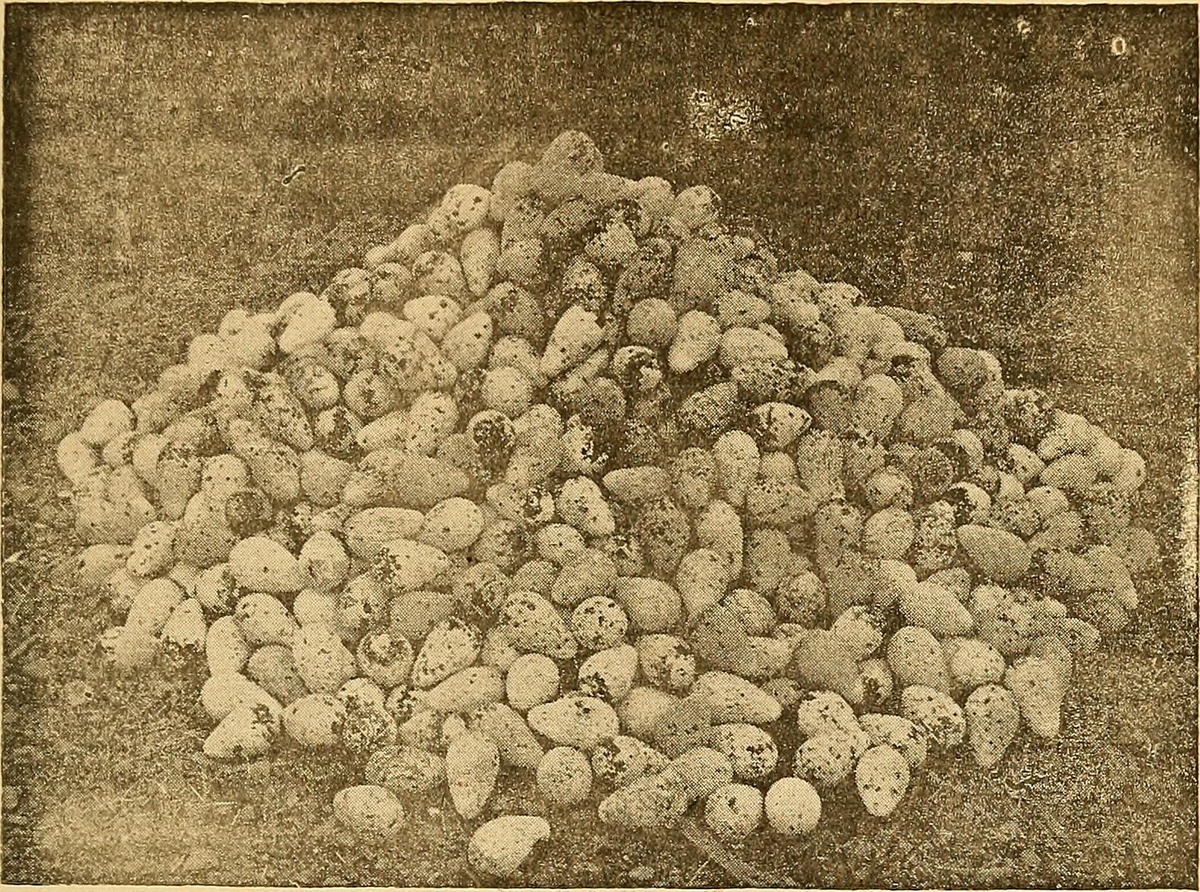 Eggs of the common murre collected from the Farallon Islands in the 1880s.

When the egg-pickers went in for the first time, they would smash every egg. "That way they could be assured that the next day, when they returned, every egg gathered would be fresh," White says.

The eggers starting coming out at about the same time the lighthouse was being built on the Farallones, says biologist Peter Pyle. "They've got hundreds of these ships coming in response to the gold rush, and a lot of them crashed on the Farallones."

Being a lighthouse keeper on the Farallones was a severe, lonely and harsh duty, says Gary Kamiya. "And then they had to contend with these raucous, aggressive eggers."

Rival eggers would sail out to challenge them. "One man in particular, David Batchelder, just kept showing up with his own bands of roughnecks," Kamiya says. "The Great Egg Wars of the Farallones took place just a few weeks before the Battle of Gettysburg."

On June 3, 1863, three boatloads of heavily armed men came to the islands. They even had a cannon with them.

"The guys at the egg company yelled out to them, 'Land at your peril!' " Kamiya says. "Batchelder said, 'I'll land! I'll go through hell!' Then he and his men spent the night drinking. They got themselves into an aggressive, alcohol-fueled state." 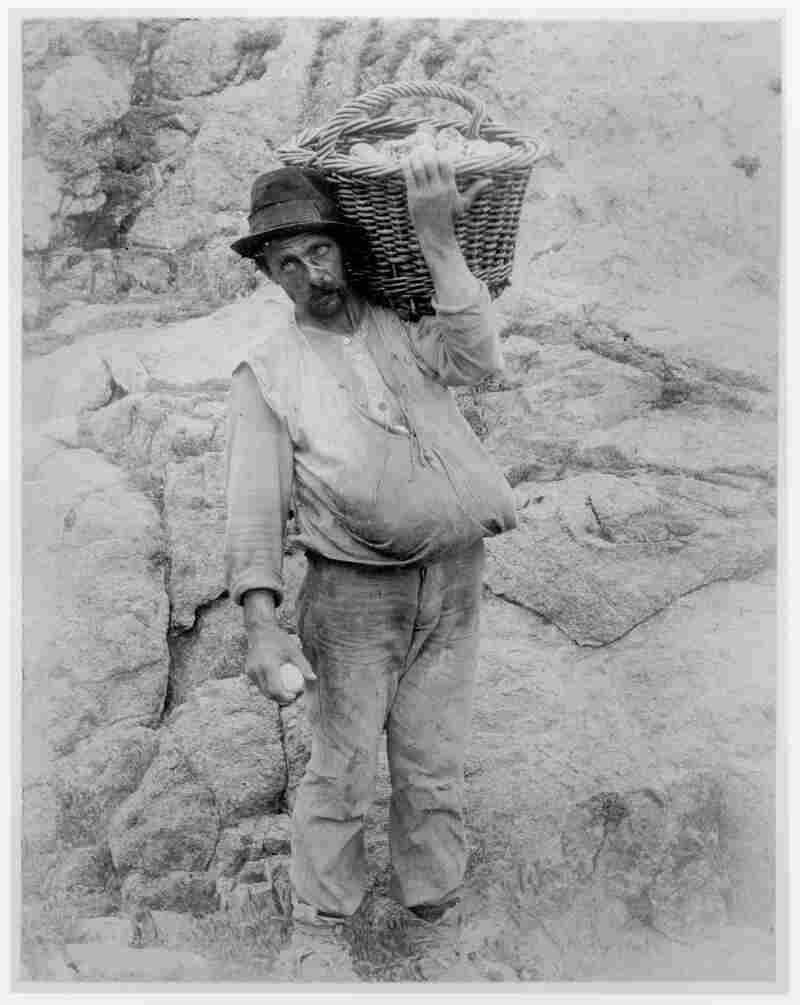 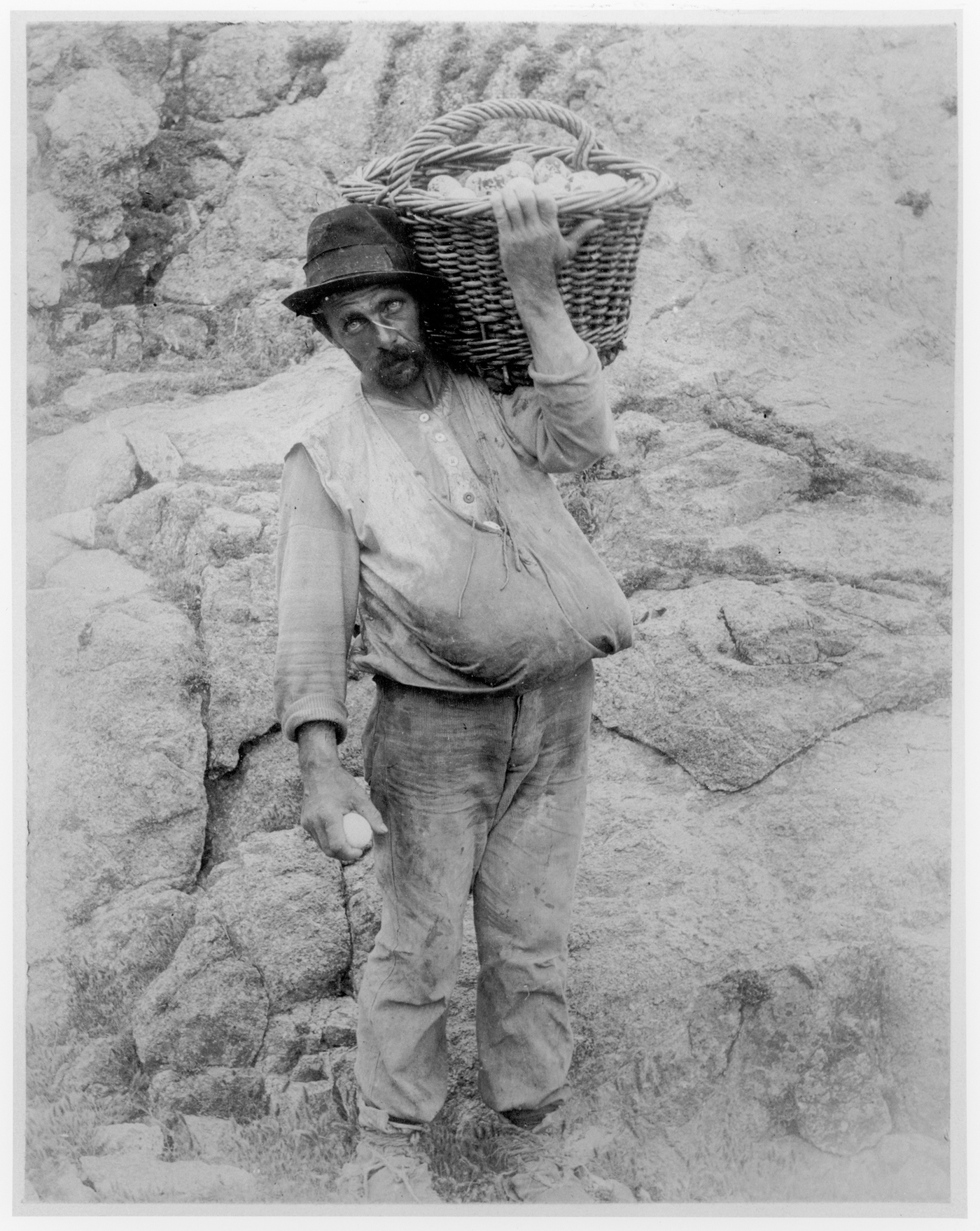 "Scottie the egger" wearing a shirt typical of egg hunters. The shirts had built-in pouches to make egg collecting easier.

When the egg company warned them, they opened fire. The first casualty was one of the egg company employees, Edwin Perkins, who died after being shot through the stomach. Five of the boatmen were shot, and eventually driven off.

Finally, the federal government ruled all commercial eggers off of the islands. Any egging after that was done by the lighthouse-keepers. "But it was black-market trading, trying to line their pockets with eggs," says Kamiya.

The plundering of eggs had caused the murre population to decline year after year, dropping from nearly 400,000 down to 6,000. In the early 1850s, about a half-million eggs were gathered per year.

"For decades, it was said that if you ate any baked goods in San Francisco, you were probably eating murre eggs," Kamiya says.

But when chickens finally got established in Petaluma, it ended up doing in the murre egg industry. The Farallones are now used by scientists to observe bird and animal life, and to track the recovery of species on the islands.

"It's a robust population now, despite the best efforts of the Farallon eggers," Kamiya says.