Accessibility links
Japan's Centuries-Old Tradition Of Making Soba Noodles : The Salt In the remote mountains of the Japanese island of Shikoku, an old woman makes soba noodles by hand from locally grown buckwheat. It's ancient technique that is adapting to modern times. 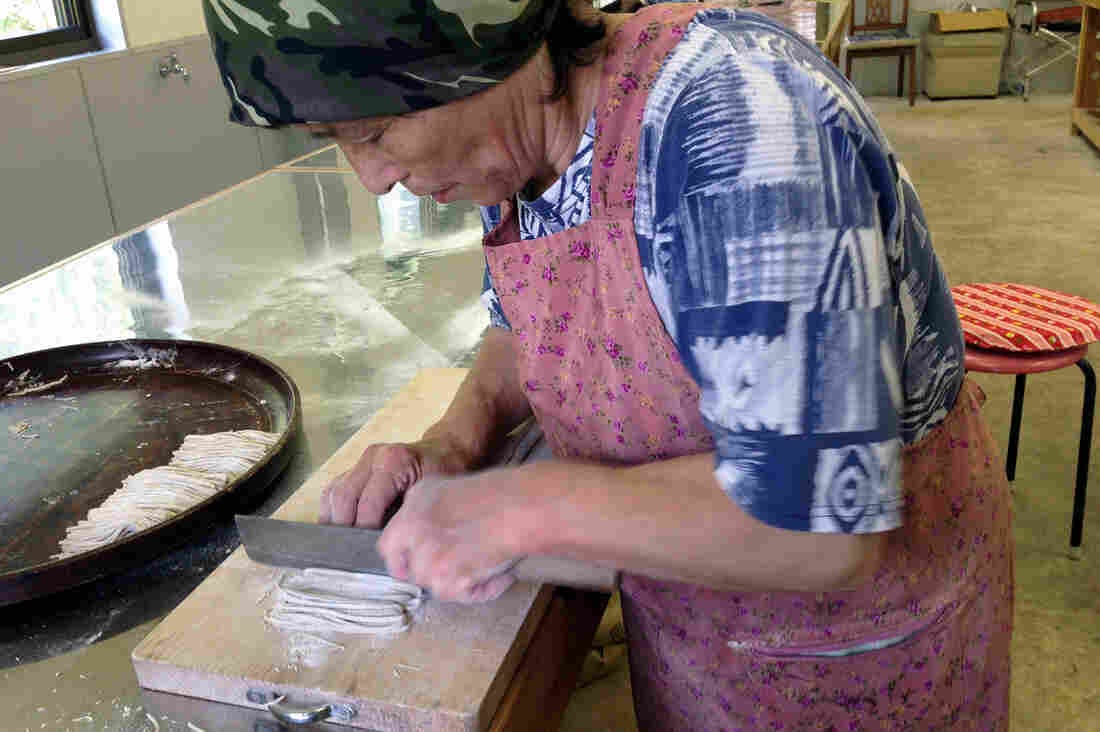 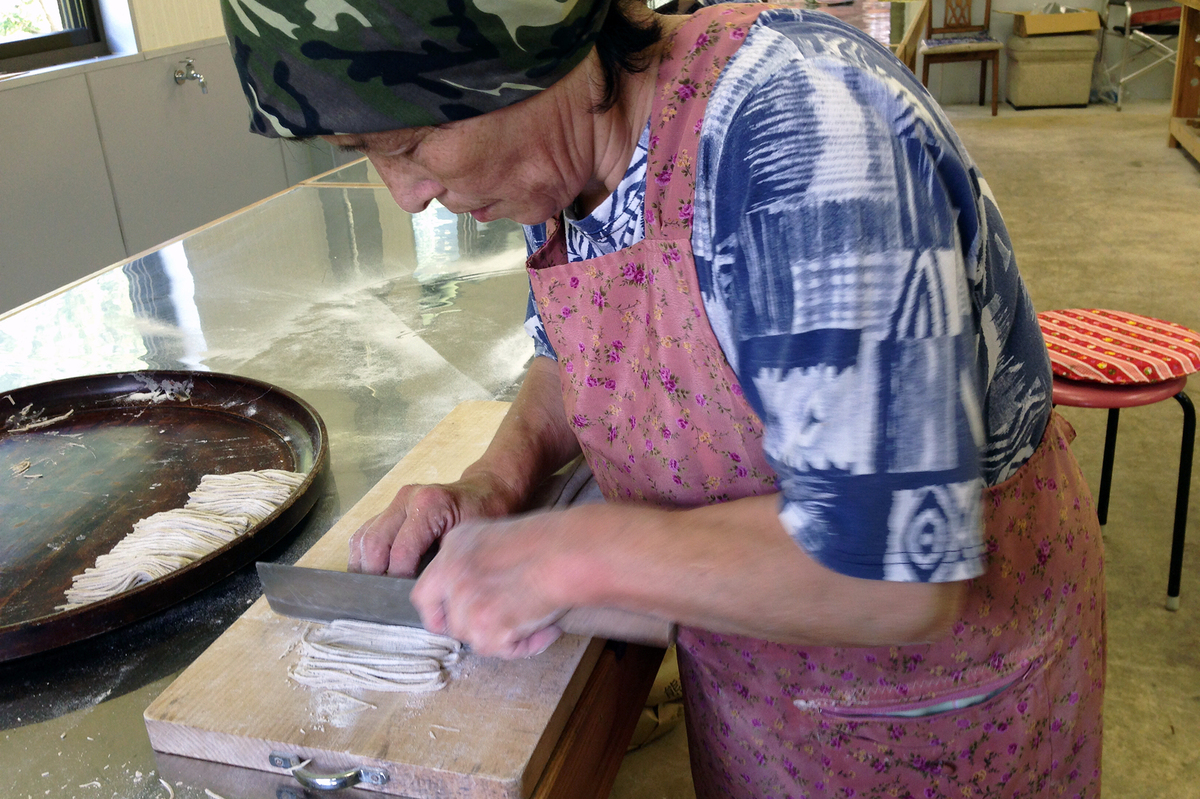 Reiko Tsuzuki, 70, makes buckwheat soba noodles by hand in her restaurant kitchen in the Japanese island of Shikoku.

Here in Japan, the buckwheat noodles known as soba are a staple. Nowhere more so than in the mountains of the southern island of Shikoku. The soil there is poor. Buckwheat is one of the few crops that will grow. So the region has been known for its soba for centuries.

Reiko Tsuzuki, 70, has been carrying on the tradition of soba-making for more than four decades. She runs a small restaurant — Tsuzuki Soba House — in a little village in the remote mountains.

She runs the place by herself: preparing and serving the food and pouring endless cups of tea from an enormous brass kettle. As if that weren't enough, she also serenades her guests with a traditional song.

It's a song sung by women as they grind the buckwheat for soba by hand. Roughly translated, it goes, "Don't be mean to your daughter-in-law," the one who would traditionally be stuck with this tedious job, because "someday your daughter will marry and become a daughter-in-law herself."

The place where Tsuzuki makes soba is in a building next door to the restaurant. It's a bright, airy kitchen, where modern stainless steel tables share space with traditional straw tatami mats. And it's large enough for Tsuzuki to teach her technique to students — ordinary people who want to be able to make soba at home. She's determined to preserve and pass on soba-making and other Iya Valley traditions. 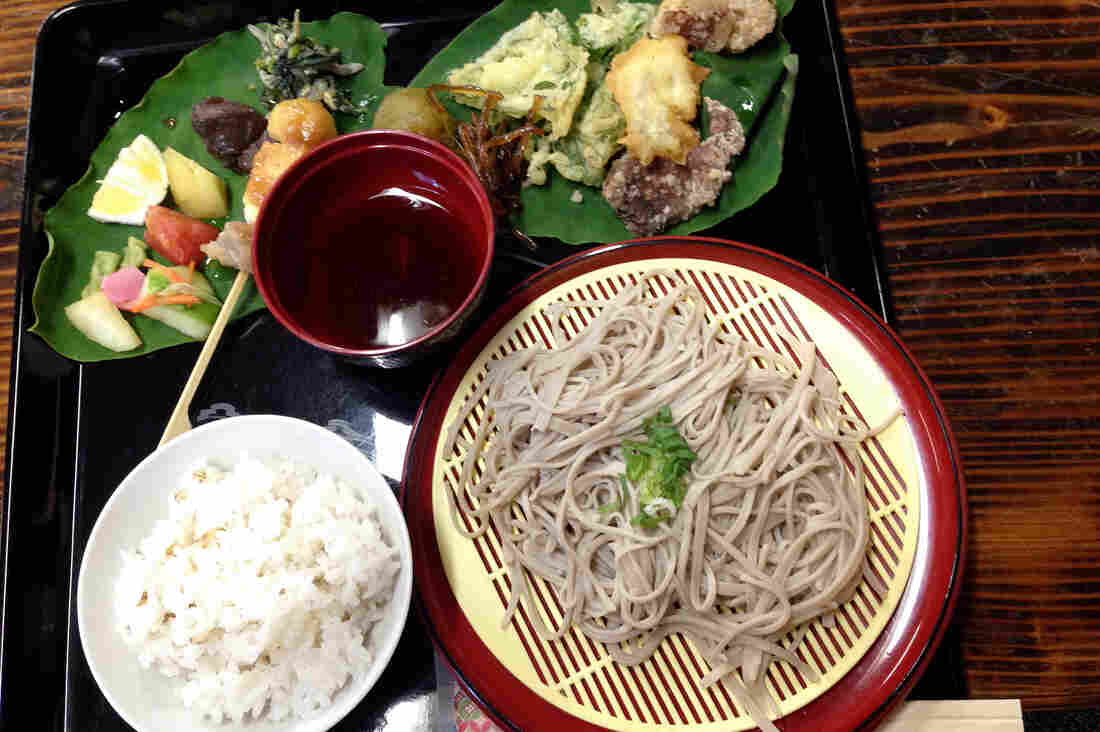 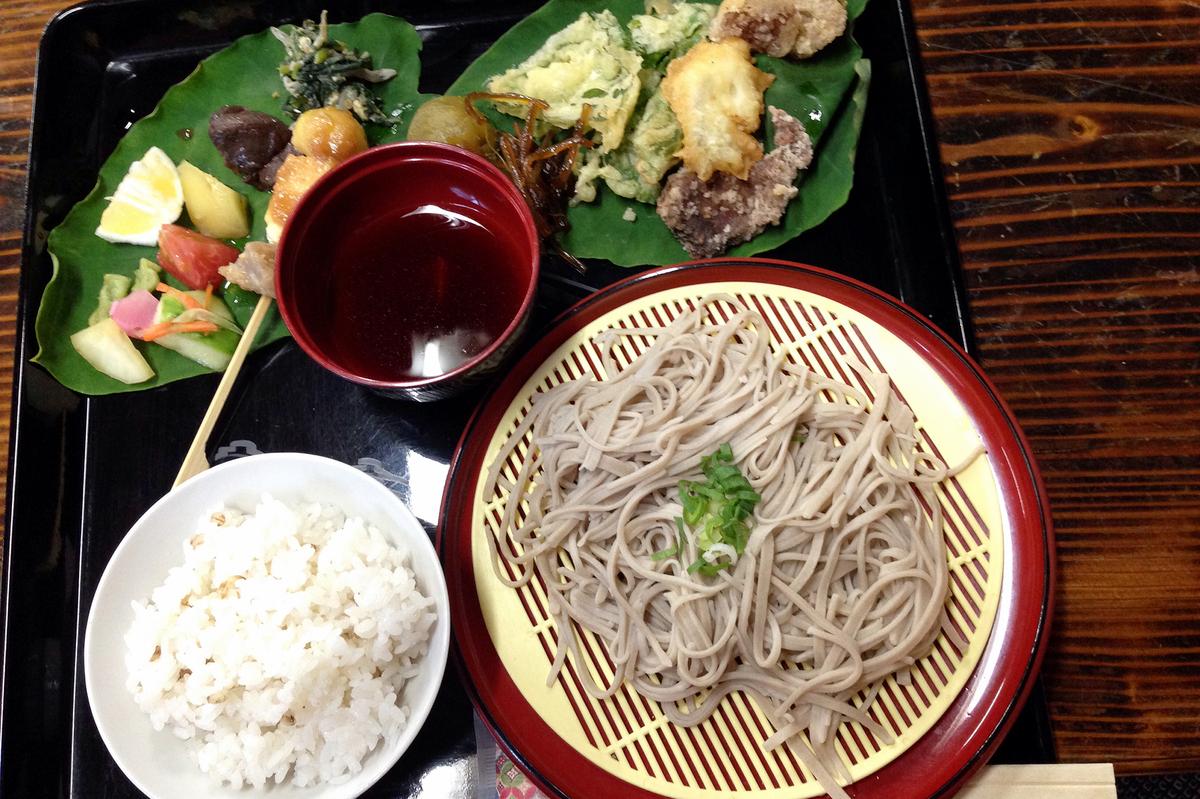 Tsuzuki demonstrates the process. First, she kneels on the tatami mats before an old-fashioned stone grinder. She's a tiny woman, not even 5 feet tall, but she can turn the grinding stone with one hand while brushing in buckwheat kernels with the other. The rhythm is hypnotic. But it's so much effort for so little flour. That's why, these days, Tsuzuki uses mostly machine-ground buckwheat. But she always adds a little of the hand-ground stuff. She says it just tastes better.

The buckwheat flour goes into a bowl. Then she adds some water. And that's it, the entire recipe for soba, at least the way Tsuzuki makes it.

She kneads the dough into a ball and then rolls it out until it's paper thin. She gently folds it into layers, then takes a knife and slices it into delicate strands.

She used to make thicker noodles, she says, but it's not the fashion anymore. She has to change with the times, in order to keep the old traditions alive.