Accessibility links
Why California's New Farmworker Overtime Bill May Not Mean Bigger Paychecks : The Salt California lawmakers just passed a landmark bill that would make farmworkers eligible for overtime if they work more than eight hours a day or 40 hours a week. Some farmers say they can't afford that. 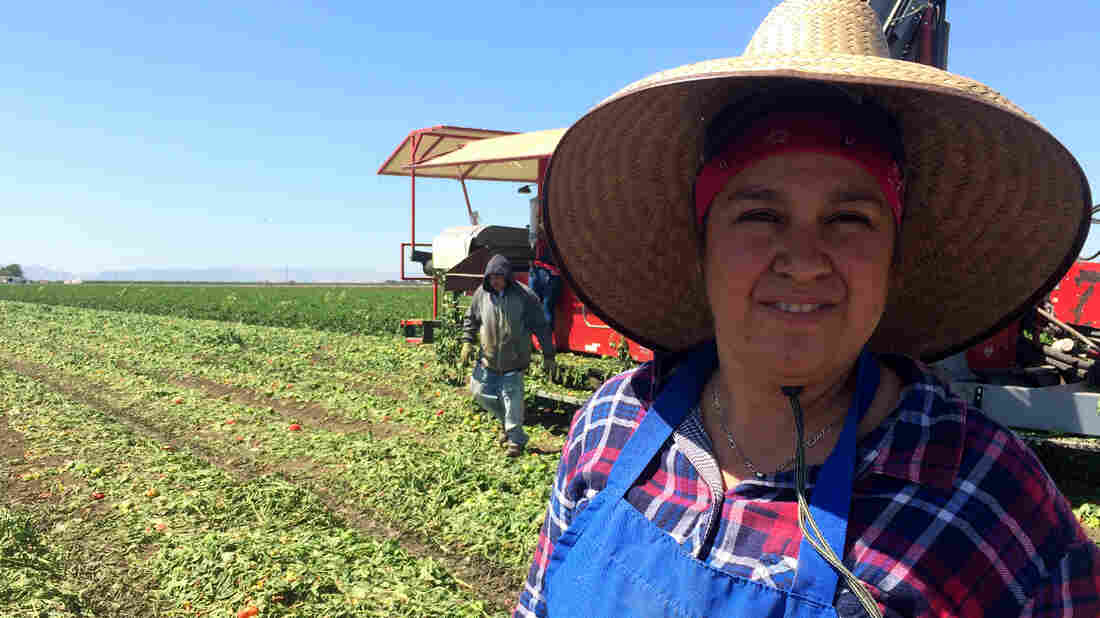 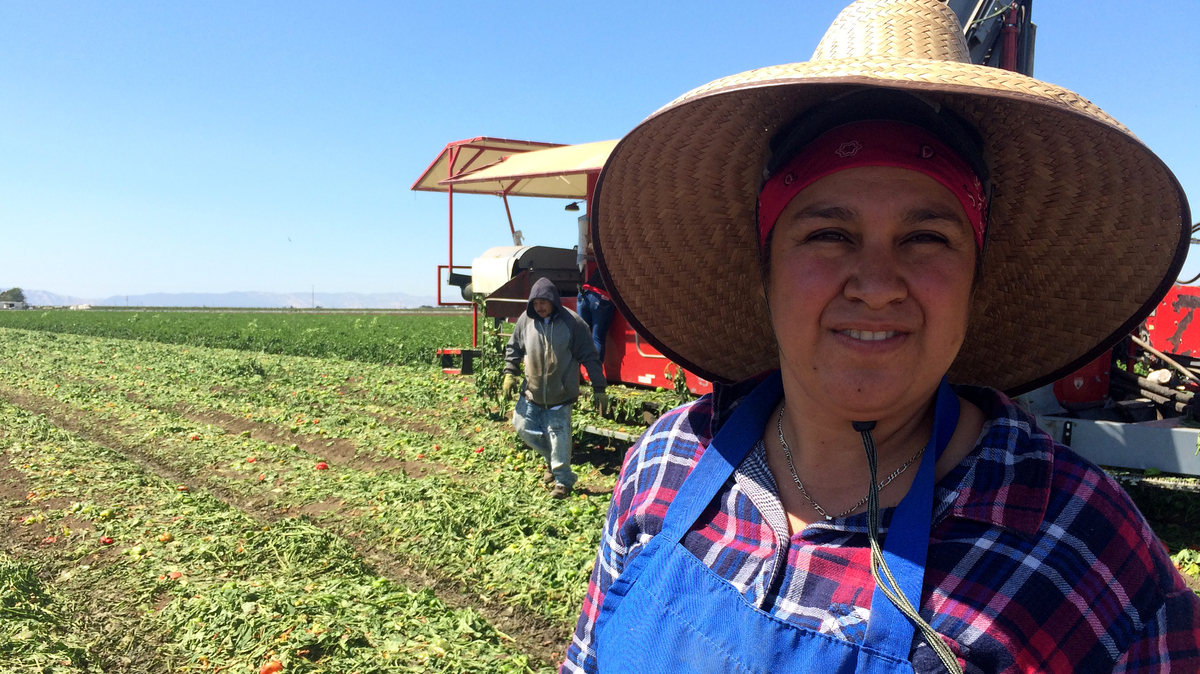 Maria Diaz sorts green bell peppers along an outdoor conveyor belt on a farm 25 miles west of Sacramento, discarding leaves and stems quickly before peppers are swept away by a mini-roller coaster onto a tractor-trailer.

Diaz, a single parent of three, is one of roughly 800,000 farmworkers in California. Under a bill recently passed by the California Legislature, Diaz could collect overtime pay.

Diaz says growers should pay overtime after eight hours. She adds that those extra earnings would help her cover child care.

California farmworkers currently earn overtime after 10 hours a day or after working 60 hours a week. But under a bill awaiting action from Gov. Jerry Brown, they would be eligible for overtime the way most laborers are — if they work more than eight hours in a day or more than 40 hours in a week. The change would be a first for farmworkers in the U.S.

But it turns out it might not add up to bigger paychecks.

Two-thirds of U.S. fruits and nuts and one-third of vegetables come from California, so higher labor costs could mean higher food bills no matter where you live in the country. If Brown signs the bill, Jeff Merwin, an alfalfa farmer and president of the Yolo County Farm Bureau, says his employees will end up losing money. 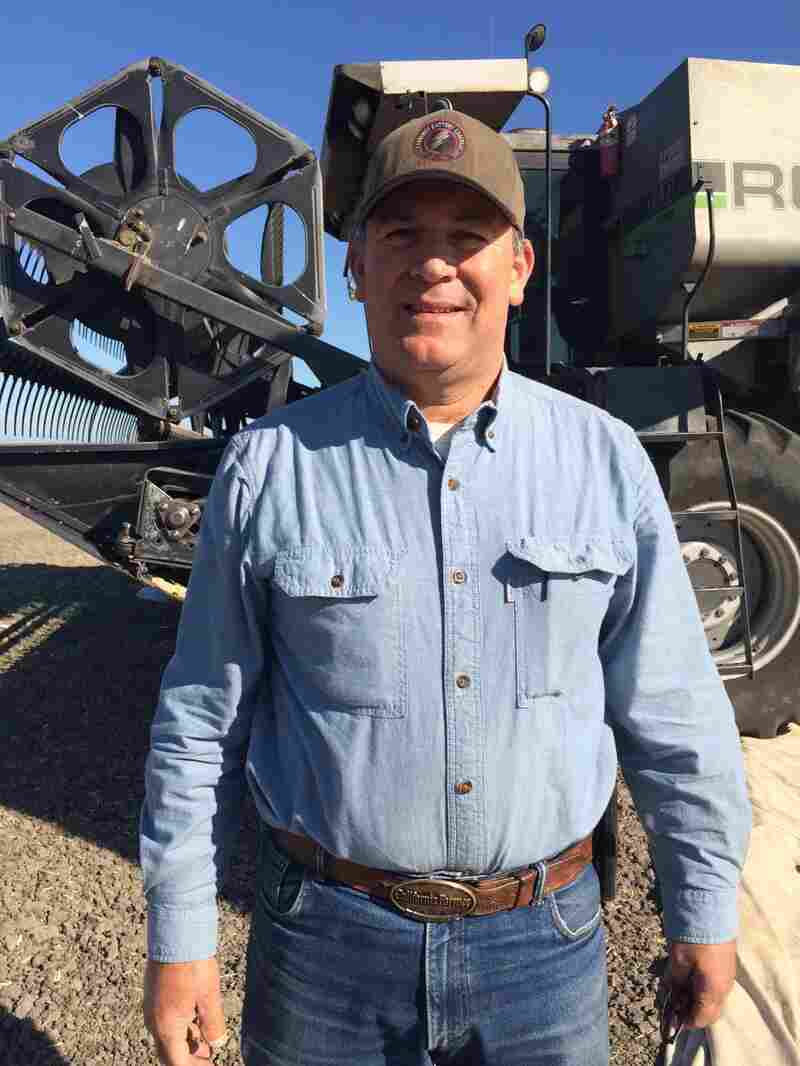 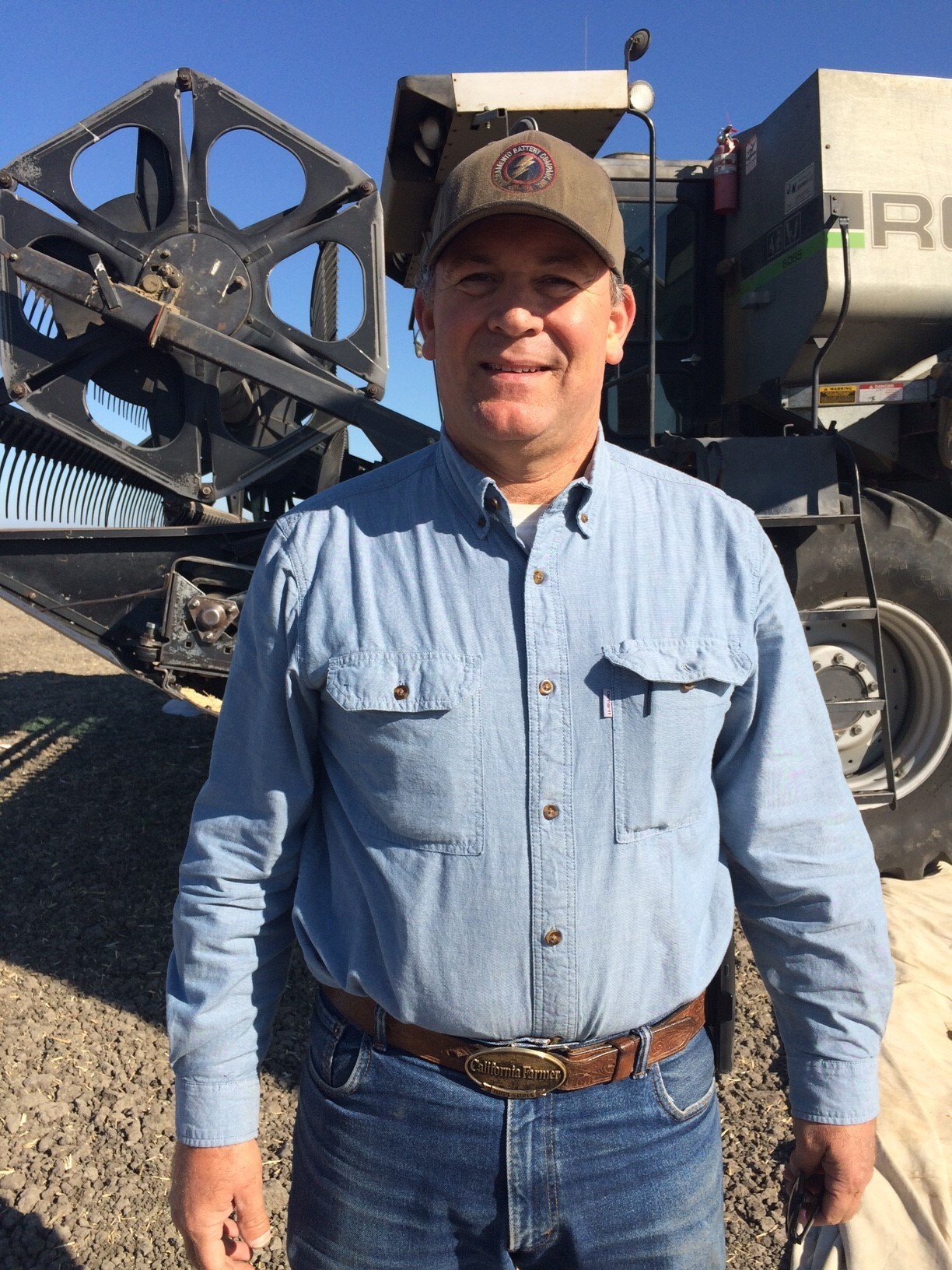 "They're not being told the story. What they're being fed is this utopian line of 'It'll be great, you'll get all this overtime because they'll pay it. You know they'll pay it.' How?" he says.

Right now Merwin's employees work about 60 hours at straight time. He says he can't afford to pay overtime, so he'll just have to cut back their hours — or find a way to do the same work in less time.

Philip Martin, professor emeritus of agricultural economics at the University of California, Davis, says there is no data on exactly who works how many hours when it comes to U.S. farmworkers. He says that's the big problem with predicting how new overtime rules will affect farmworkers and their employers.

And I'm not the Grinch here. All I'm saying is it's Economics 101. If the money's not there, you can't pay it. And the money is not there.

"So in a sense, we're making policy based on assumptions which may or may not be true," he says.

Right now, Martin says, California is a crazy patchwork when it comes to regulating farm labor. Farmworkers are excluded from certain rights; in other cases, they receive special protections.

Martin says the first step in coming up with a more comprehensive solution is updating the picture of farmworkers — from Dust Bowl-era Grapes of Wrath to the 21st century.

"It's a different story than many people have in their mind, from the days when most farmworkers were single men who lived on the farm where they worked and lived in dorms and things like that. That still exists, but it's very rare," he says.

If the governor signs the bill by Wednesday, the new overtime rules will be phased in over the next six years in California.