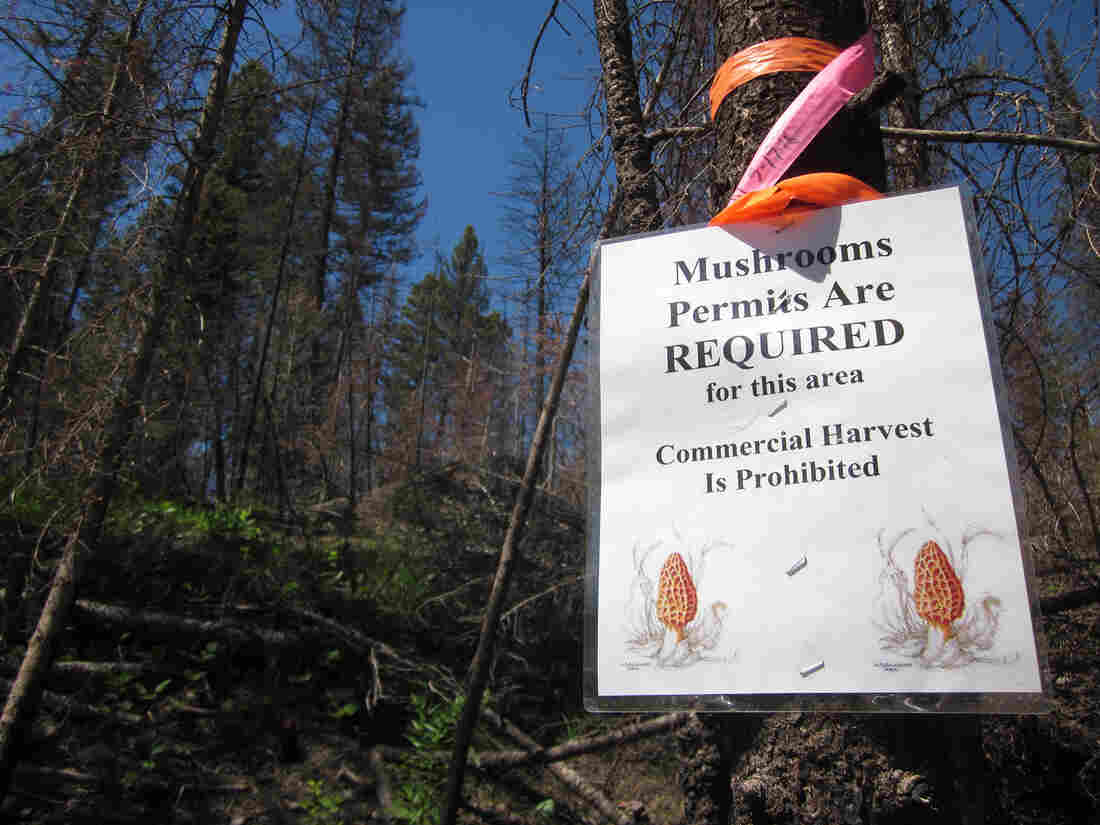 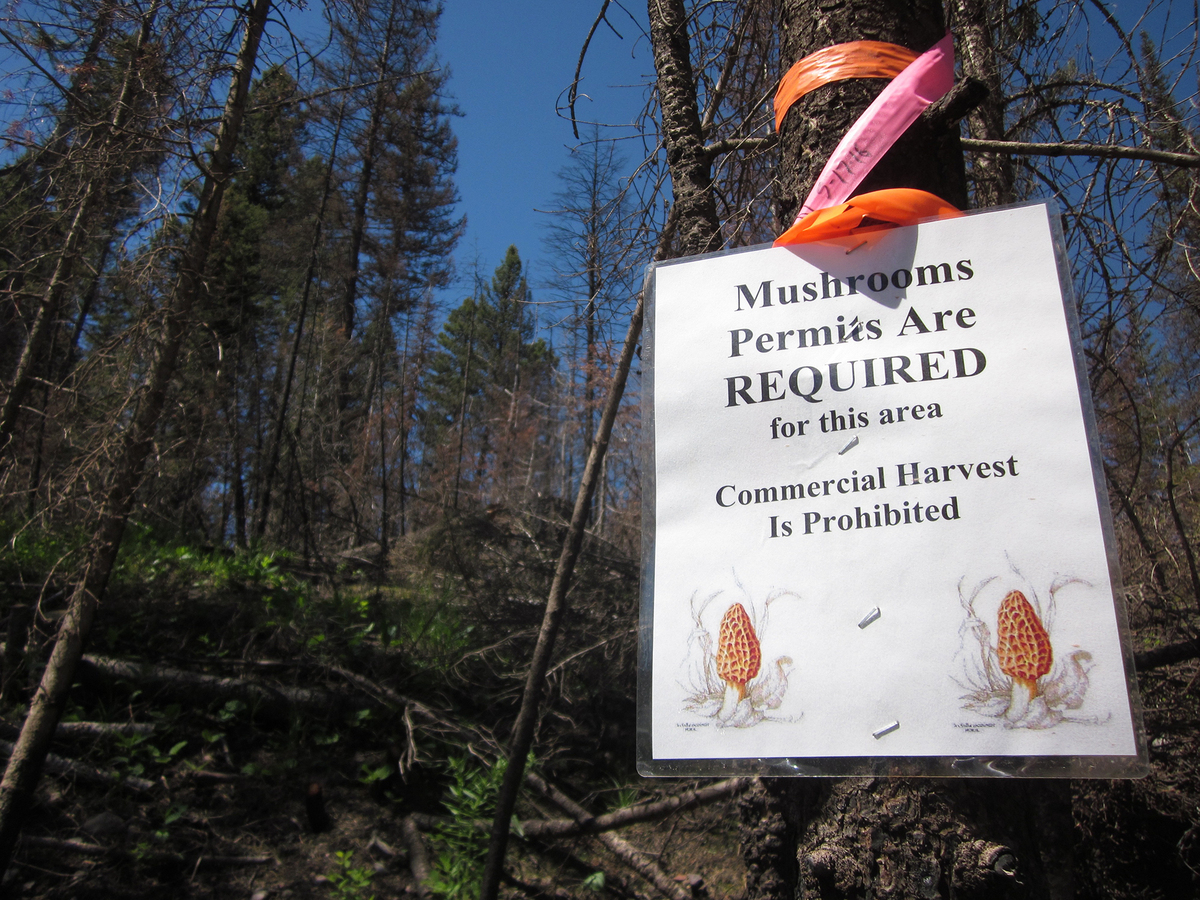 This year the U.S. Forest Service is only issuing personal-use permits in Montana's national forests.

At a campground in northwestern Montana, 30 people are groggily gearing up for a day of mushroom picking.

Most are here because they want an excuse to get outside and taste some of Montana's more exotic wild mushrooms. But others, like Matt Zaitz from Kansas, are here to turn a profit.

Zaitz started picking mushrooms in the Midwest this spring and followed them north as the season progressed. He's now hunting morels in the Crown of the Continent region near Glacier National Park. At this point, Zaitz considers himself a professional.

After Fires In West, Mushroom Hunters 'Chase The Burn'

"I realized that if I really went at what I was doing, that I could potentially earn and make a living," he says.

Zaitz can sell a pound of morel mushrooms for about $20. On a good day, which is by no means every day, Zaitz says he can bring in a harvest worth $500. He says there's potentially millions of dollars to be made off mushrooms in Western public lands, especially in burn zones the summer after a big wildfire.

For reasons scientists don't fully understand, morel mushrooms pop up in areas affected by fires. Some think it's because there's less competition from other plants. Others think fire fixes the soil or it has to do with temperature. A recent study by University of Montana forest ecology professor Andrew Larson concluded that forest fires in Yosemite National Park could produce more than a million morels per year. 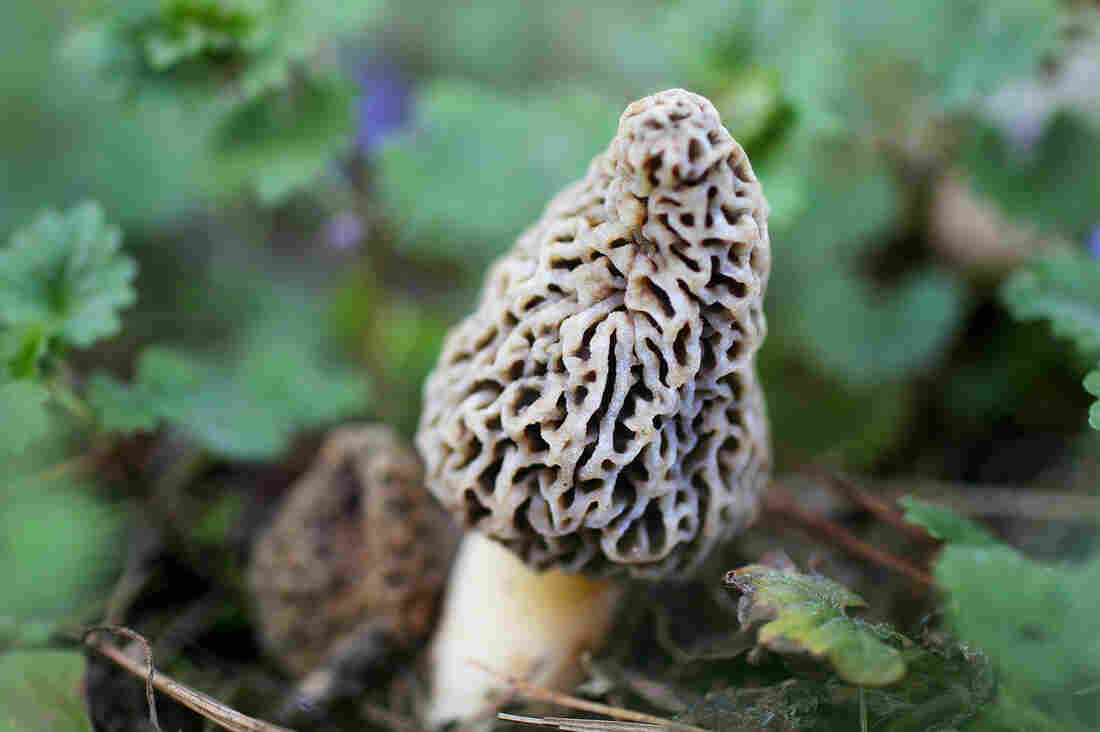 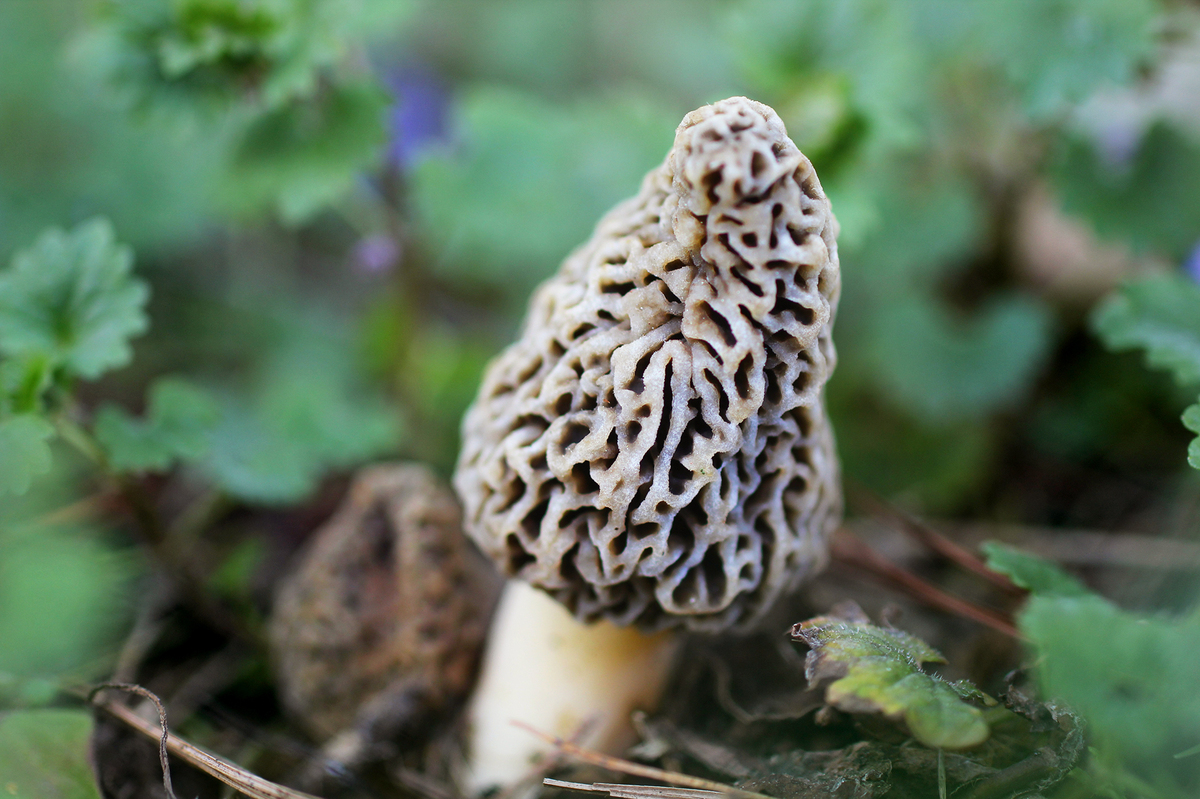 Usually, the U.S. Forest Service offers a special license to pick morels for commercial use in burn zones. But this year, managers in Montana decided not to issue any commercial licenses. In fact, it's illegal to pick in burn zones in any of Montana's national forests. The ban is sending pickers like Zaitz underground.

"There's millions of dollars of mushrooms in the forest and they want to close that off," Zaitz says.

The problem isn't over-picking, says Deb Mucklow, a district ranger for the Flathead National Forest, it's the hordes of people who show up to pick. She says the last time the Flathead forest had big fires in 2007, hundreds of people came the next summer to pick morels. They left behind a huge mess.

"We had issues with litter, with the latrines," Mucklow says.

Pickers came from all over the country, including crews of migrant pickers from Cambodia, Laos and Mexico. There were even rumors that some of the pickers were trying to pay off gambling debts with mushroom money. Things got dangerously territorial in the backcountry.

"People were using firearms or sidearms to say 'This is my area, nobody can go into it,' " says Mucklow.

So this season, the Forest Service decided to only issue personal-use permits, which limit a picker to 60 gallons for the entire season. It also requires pickers to cut their mushrooms in half so they can't sell them.

For some local pickers, the ban has been a huge financial hit.

"It really put us in a difficult position," says Renee, who lives in Kalispell, Mont. NPR agreed not to use her last name because she is breaking the law by continuing to sell her mushrooms.

"We had a dream," she says. "We knew the fires had happened, we were waiting all winter to come to this location." 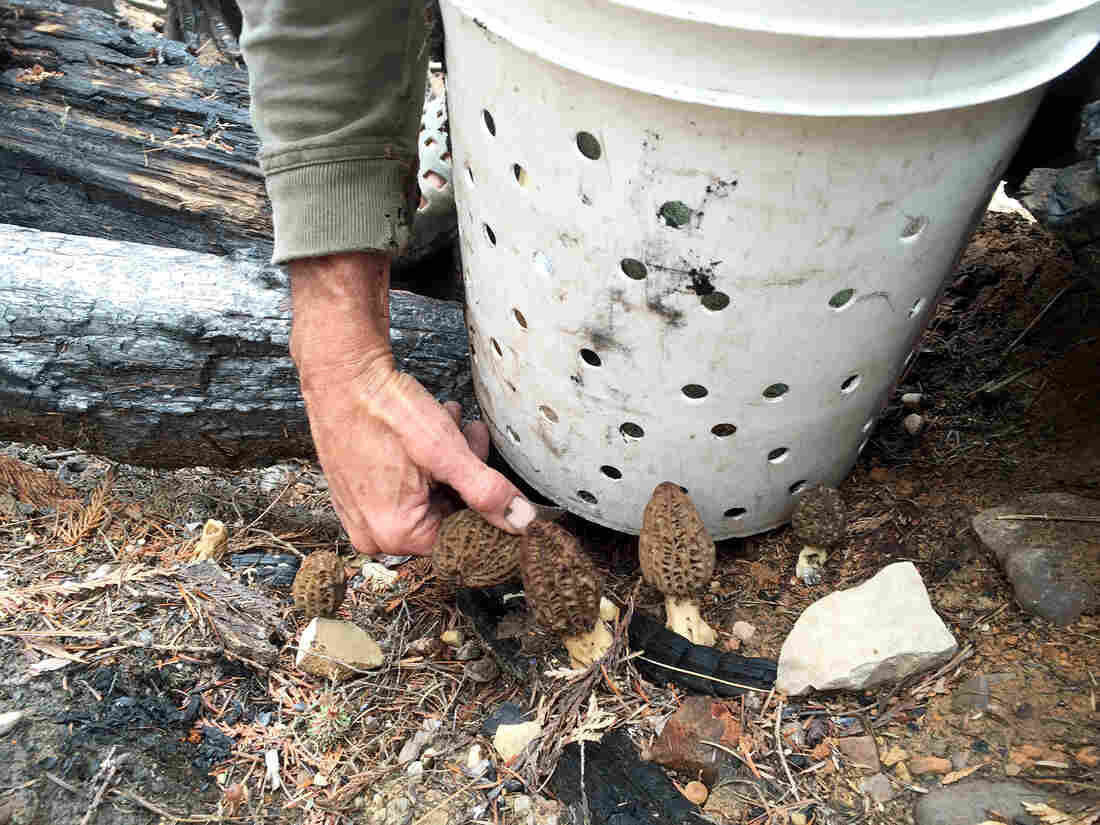 Some people are continuing to pick and sell mushrooms despite the ban. Nicky Ouellet for NPR hide caption 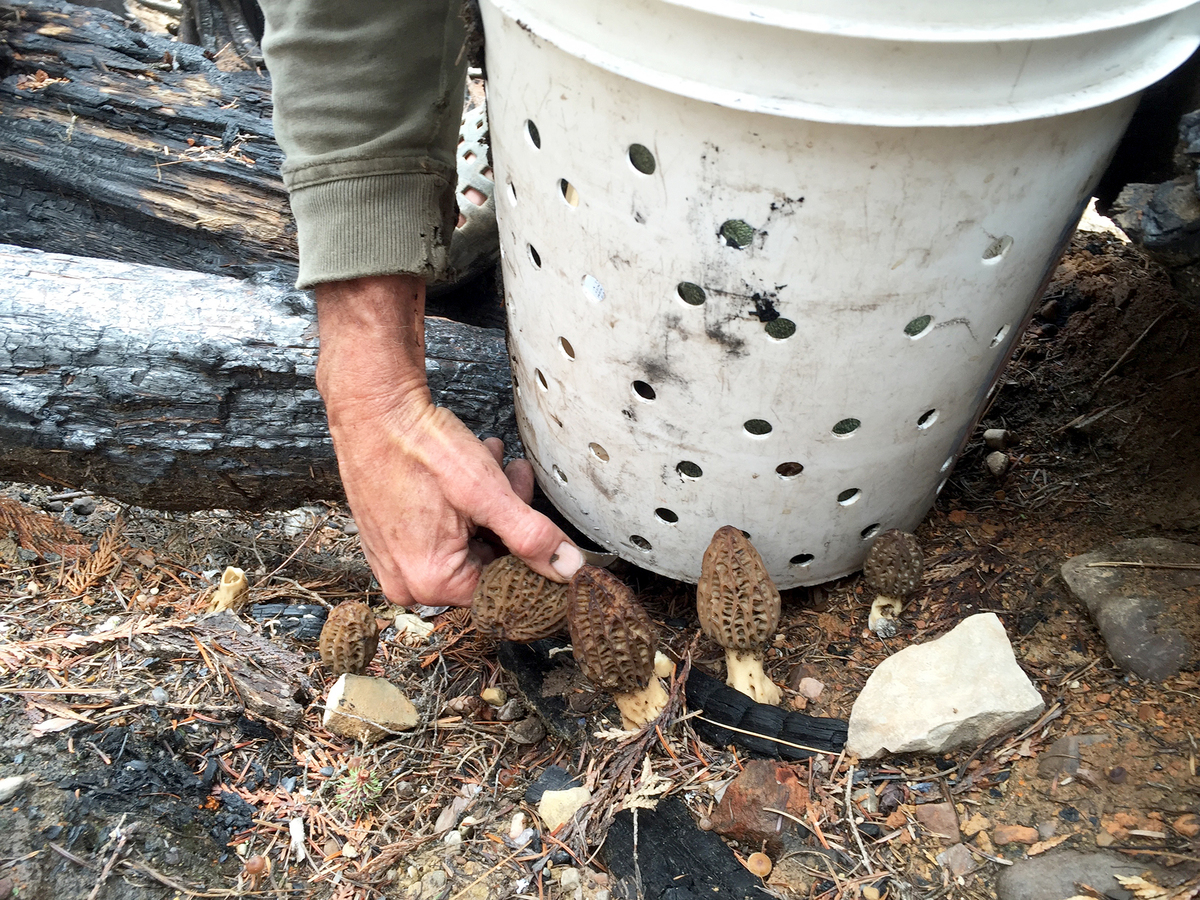 Some people are continuing to pick and sell mushrooms despite the ban.

Every year Renee and her husband supplement their income by selling morels. They both have regular day jobs — she's a house cleaner, he's a handyman. They hoped selling morels would bring in enough income for the first and last month's rent on a new apartment.

In the past, Renee sold her morels to chefs at restaurants or from the back of her truck for $20 a pound. This year, she's hesitant to sell so openly and she's making half of what she normally does.

Renee sells on Facebook in what's become something like a mushroom black market. She feels the Forest Service is making her into a criminal for something she's done legally for years.

The Forest Service reconsiders picking regulations every year, depending on where the big fires are. Renee is hoping the service will issue commercial licenses next year so that she and other for-profit pickers can be back in legal business.