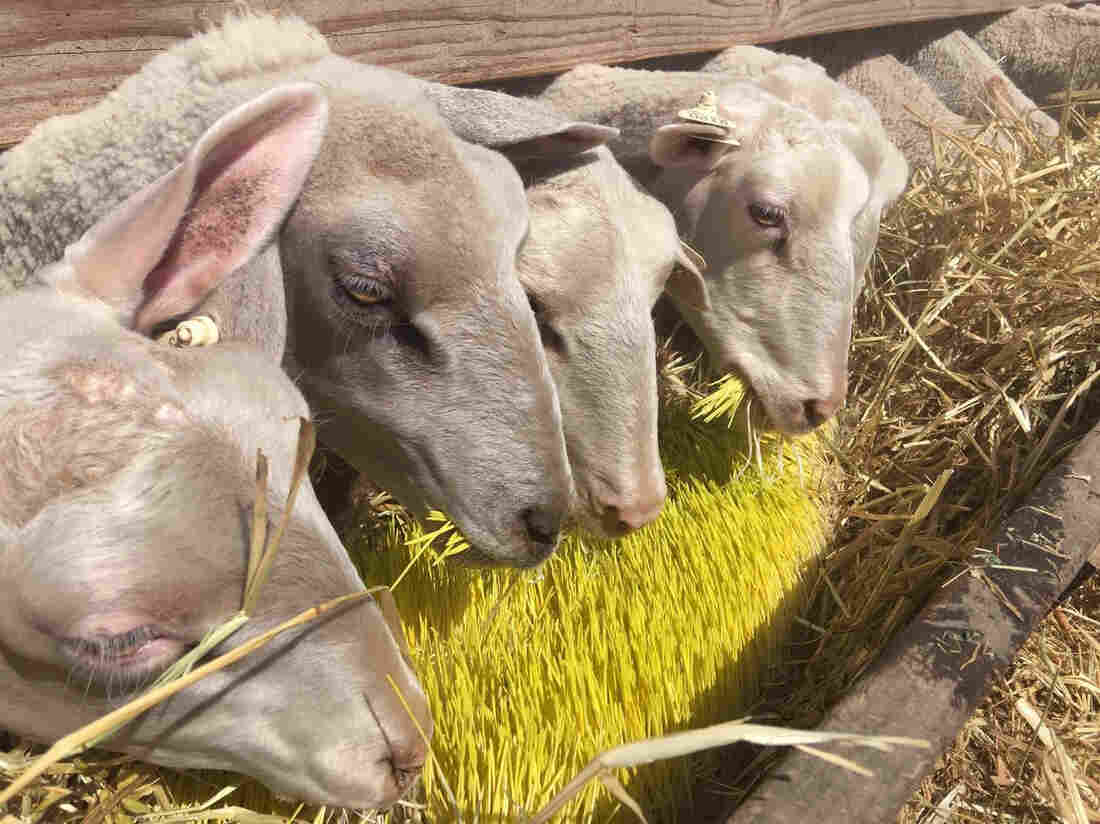 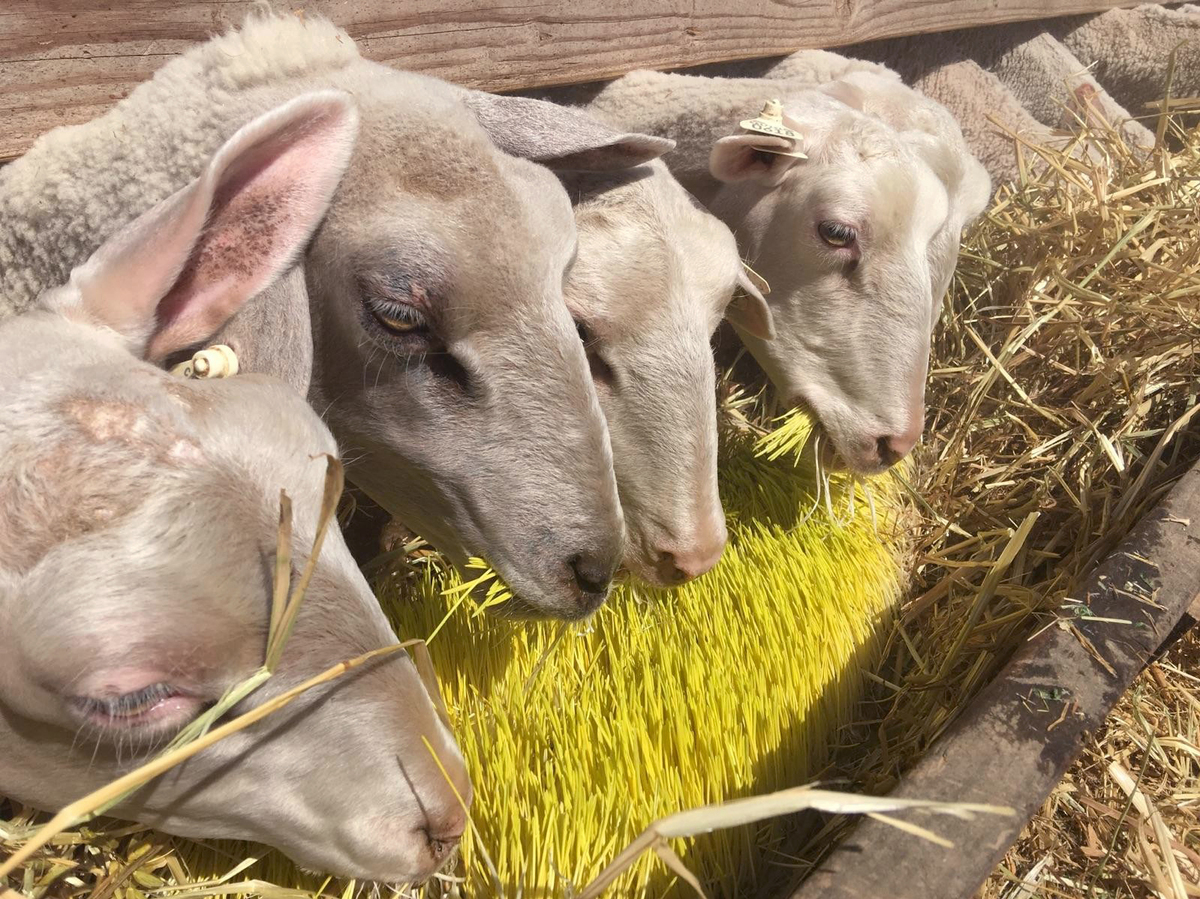 The extended drought in California has farmers looking for ways to use less water. Among them: growing feed indoors using hydroponics. The new diet is making some Central Valley sheep very happy.

On Golden Valley Farm an hour north of Fresno, Mario Daccarett's employees milk 500 sheep every day, in rounds of 12. This creamy milk eventually is turned into cheese and sold at places like Whole Foods.

"They tell me that our Golden Ewe cheese is the best for grilled cheese sandwich ever," Daccarett says. (I bought some and it was really tasty.)

He says he gets about 800 pounds of milk a year from each ewe. To make that much milk it takes a lot of feed – like oats and hay. And to cut the cost of all that feed, Daccarett says he has a secret ingredient that enriches his cheese while at the same time saves a lot of water. That ingredient? Sprouted barley grown indoors.

"We plant every day and we harvest every day, and it takes six days to complete the cycle," Daccarett adds.

He feeds his sheep one part oats and hay and one part sprouted barley. Growing barley as feed isn't anything new, but Daccarett sprouts barley seeds inside shipping containers using hydroponic technology and indoor grow lights. He's using just 2 percent of the water it would take to grow the crop outside.

"I think that's a big advantage if you don't have a lot of land," says Daccarett. You can produce a tremendous amount of feed in a very, very small area. With a very little amount of water."

Inside each 10 by 20 foot shipping container are five horizontal rows of shallow black trays. Daccarett's nephew Jose Quiñonez says the growing process is quite simple. "We just get the tray, just dump the barley, and spread it really good." 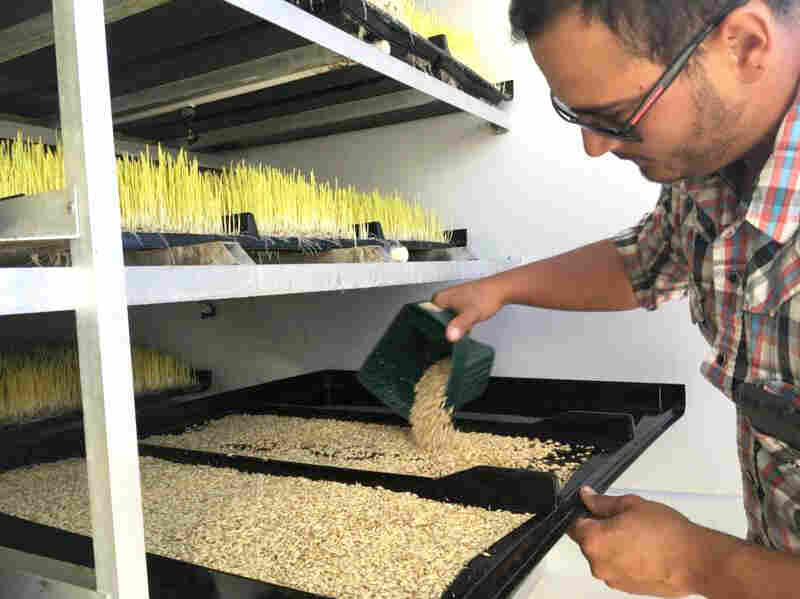 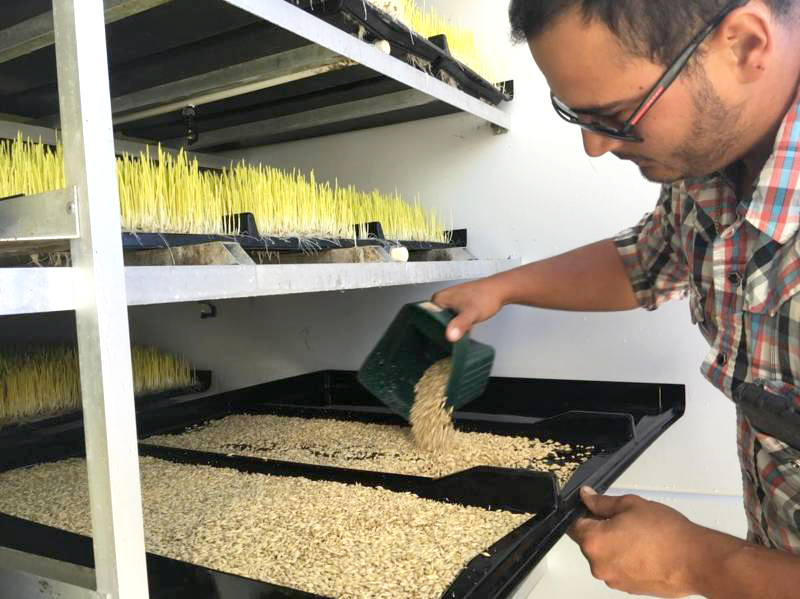 After he fills each tray he pushes the row forward until the container is full and closes the door.

"That's it ... wait seven days and it will be ready to feed," says Quiñonez.

Every hour, sprinklers mist the seeds for 20 seconds. That amount of water is just enough to start germination. In a matter of days these sprouts will stand 6 inches tall and be ready for the sheep to eat. The farm produces 2,400 pounds of sprouts every day.

But not everyone thinks growing indoors is worth it.

"If you really apply a little bit of economics to it and animal nutrition to it, it doesn't appear quite as promising as one might think," says Putnam.

Putnam says these hydroponic containers are expensive, about $100,000 each. But for sheep rancher Mario Daccarett, it's working. He says his first two containers paid for themselves in just over a year.

"The more pressure we have from water limitations or the more pressure to become more efficient ourselves and more sustainable — you're going to see more people doing it," he explains.

And when Quiñonez feeds the sprouts to the sheep, they come running.

"They go crazy when they see it," he says. "They really like it."

And just like sheep love the sprouts, Daccarett says he loves the financial savings from using this not so-widely-used farming practice. He hopes to buy three more shipping containers to grow even more sprouts in the coming year.