Accessibility links
How GMOs Cut The Use Of Pesticides — And Perhaps Boosted It Again : The Salt There's new and detailed data on the impact of genetically modified crops on pesticide use. Those crops replaced insecticides, and, at first, some herbicides. But herbicide use has rebounded. 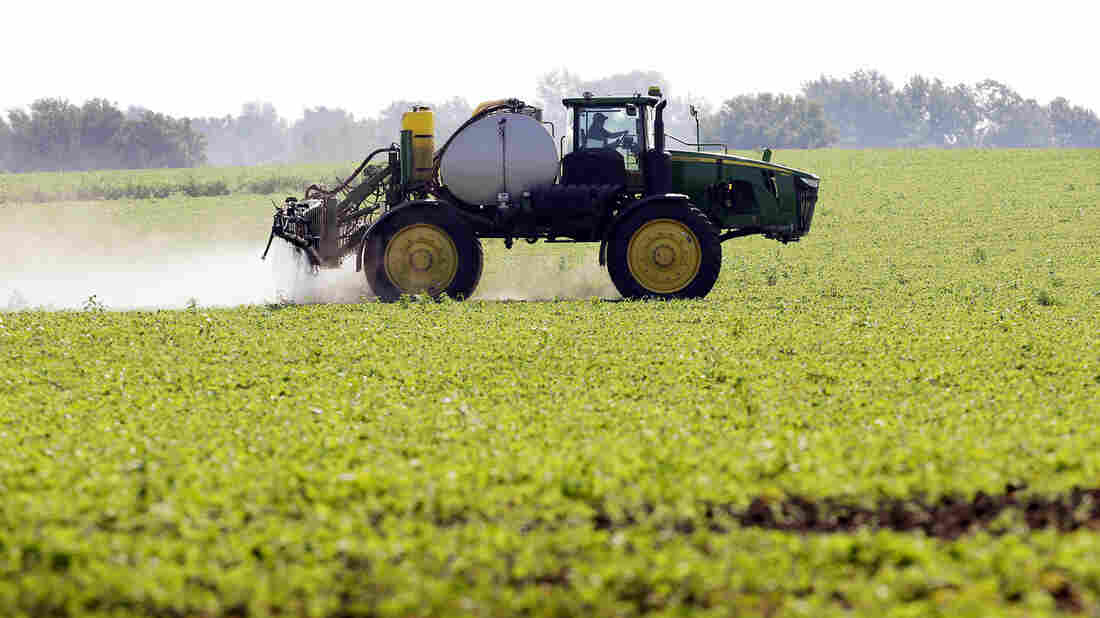 A farmer sprays a soybean field in Granger, Iowa. There's new and detailed data on the impact of genetically modified crops on pesticide use. Those crops replaced insecticides, and, at first, some herbicides. But herbicide use has rebounded. Charlie Neibergall/AP hide caption 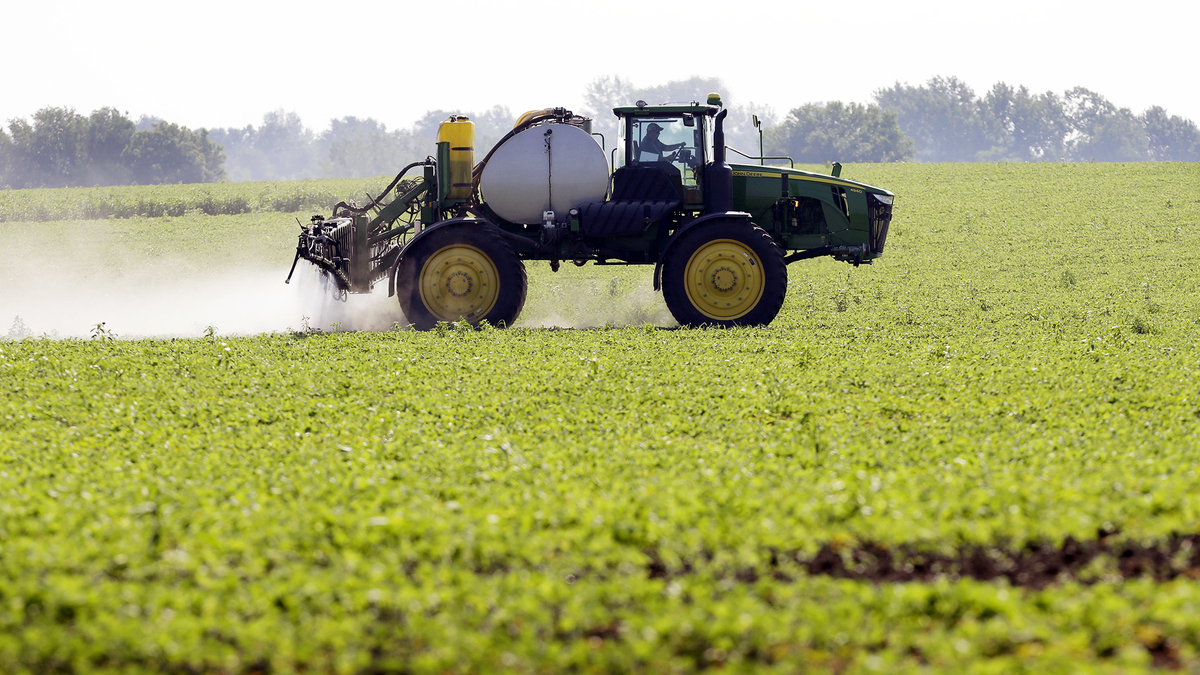 A farmer sprays a soybean field in Granger, Iowa. There's new and detailed data on the impact of genetically modified crops on pesticide use. Those crops replaced insecticides, and, at first, some herbicides. But herbicide use has rebounded.

In the ferocious, sprawling brawl over genetically modified crops, one particular question seems like it should have a simple factual answer: Did those crops lead to more use of pesticides, or less?

Pesticides include both insecticides and herbicides. Backers of GMOs point to the example of crops containing new genes that fight off insect pests, so farmers don't have to spray insecticides. Biotech critics point to the example of crops that have been altered to tolerate specific weedkillers, like glyphosate, thus encouraging farmers to rely more heavily on those herbicides.

This week, scientists at Iowa State made a fresh attempt to answer this question. It's based on the most detailed data ever assembled to examine the issue. Those data came from a private company, which gathered information about the farm practices of 5,000 randomly selected farmers who grew corn and soybeans, the two most widely planted crops in the country. That information allowed detailed comparisons of pesticide use on fields planted with GMO corn and soybeans, compared to non-GMO fields.

Unfortunately, this study probably won't settle the debate. It's that complicated.

One of the study's conclusions is straightforward and difficult to dispute. Genetically modified, insect-protected corn has allowed farmers to reduce their use of insecticides to fight the corn rootworm and the European corn borer. There is, however, concern that this effect won't last. Corn rootworms have evolved resistance to one of the genes that has been deployed against them.

When it comes to weedkillers, though, the picture gets more murky. For one thing, the effect of GMOs has been different in corn than in soybeans. Farmers who switched to glyphosate-tolerant corn also switched herbicides, and used less total herbicide than farmers did on conventional corn — for a while. In the years since 2007, however, glyphosate-tolerant corn got sprayed with more weedkillers, as measured in kilograms per acre, than corn without that GMO trait.

Farmers who are growing genetically modified, glyphosate-tolerant soybeans, meanwhile, have been using more weedkillers than their non-GMO neighbors. In fact, that gap has been widening in recent years.

Edward Perry of Kansas State University, a co-author of the new study, which appears in the journal Science Advances, says farmers may be using more herbicides on glyphosate-tolerant crops in recent years because they have to fight off an increasing number of weeds that have evolved to become resistant to glyphosate.

Complicating the picture, however, is the fact that the war on weeds involves many different herbicides, and they vary tremendously in their environmental effects.

The new study tries to account for that by comparing the "environmental impact quotient," or EIQ, of the herbicides sprayed on each field, in addition to their weight.

But Andrew Kniss, a weed scientist at the University of Wyoming, says the EIQ falls woefully short as a measure of real environmental impact. "Toxicity can vary by a factor of 10 or a hundred," he says. The EIQ doesn't come anywhere close to capturing those large differences among chemicals, he says.

Much better, he says, is a "risk quotient" measure that's used by the Environmental Protection Agency. "It is, frankly, disappointing to see continued use of the EIQ in the peer-reviewed literature," Kniss wrote in an email to The Salt.

Kniss says the EIQ is such a crude measure that this study can't convincingly show whether GMO crops have been helpful or harmful to the environment.

So the debate continues.