Accessibility links
One Restaurant's Recipe For Social Good: Same Meals, Different Prices : The Salt The founders of Everytable in LA have created identical grab-and-go restaurants full of healthful food options, but with different pricing structures depending on the communities they serve. 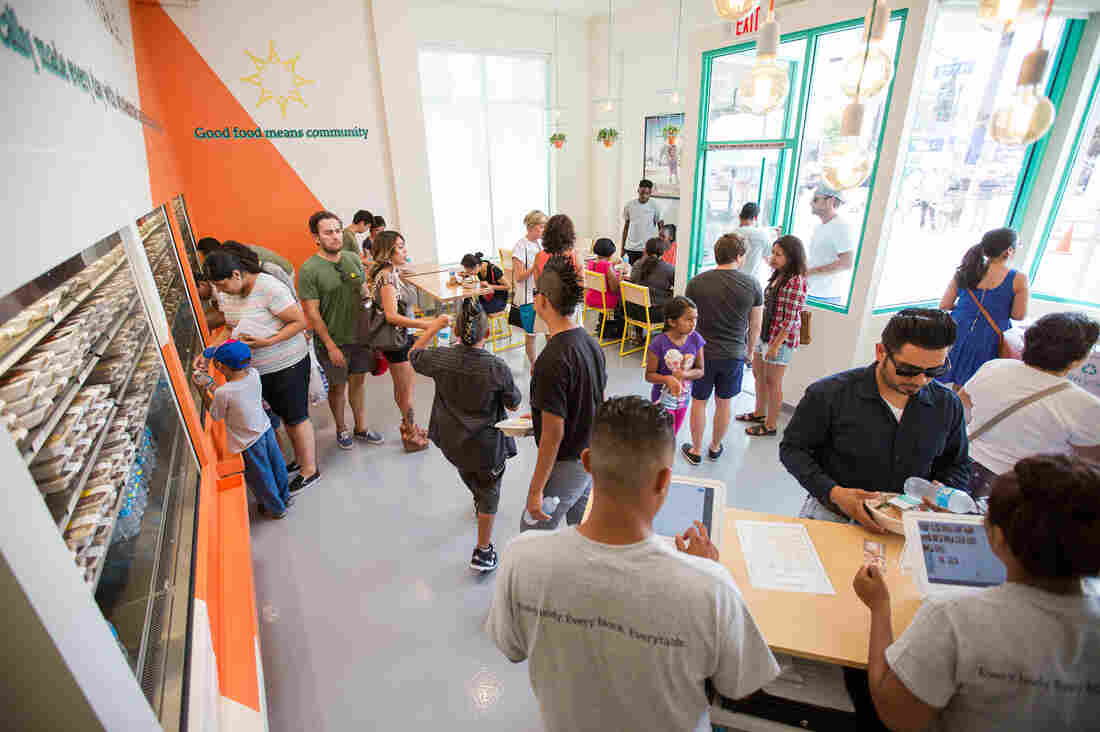 Everytable sells healthful food in low-income neighborhoods like South Los Angeles at prices competitive with fast food. The restaurant's outlets will have different pricing structures depending on the neighborhood. Courtesy of Everytable hide caption 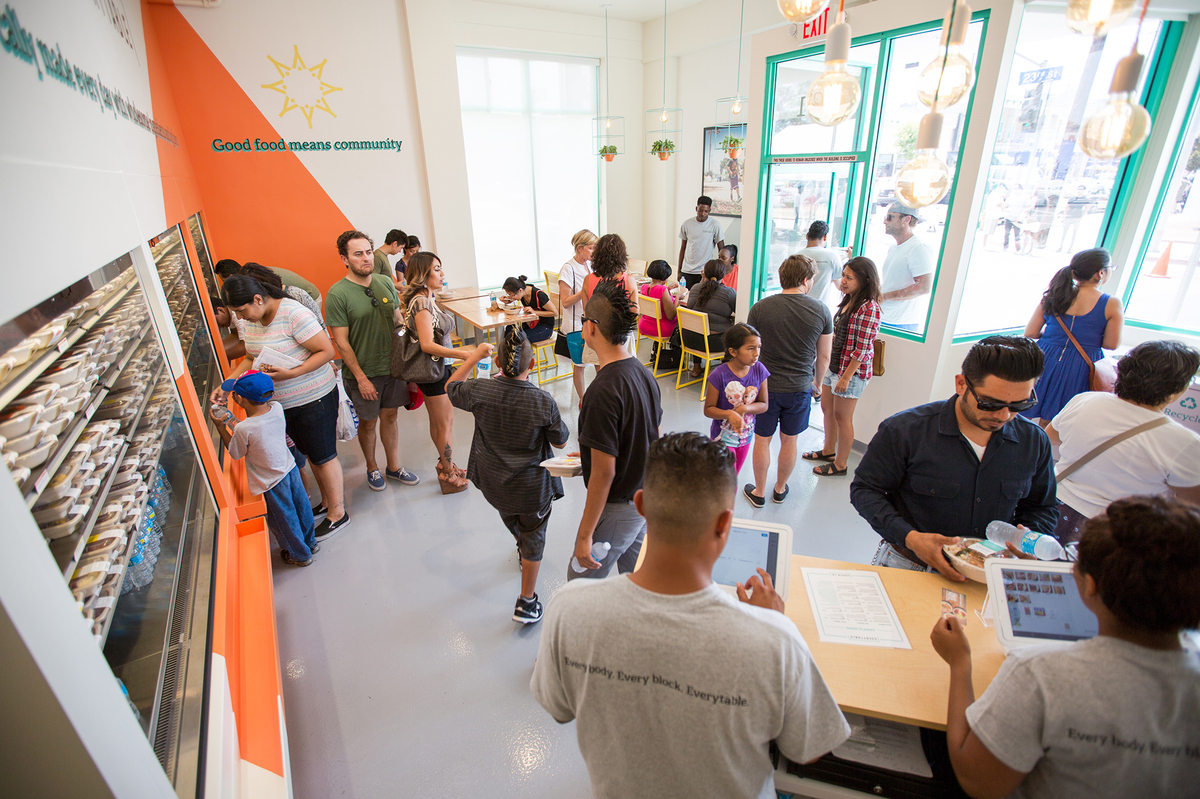 Everytable sells healthful food in low-income neighborhoods like South Los Angeles at prices competitive with fast food. The restaurant's outlets will have different pricing structures depending on the neighborhood.

A restaurant chain that charges twice as much for a meal in one location as it does in another? You would think that's a recipe for angry customers.

But Everytable in Los Angeles is betting that this will prove a successful business model, while also serving up a hefty side of social mission.

Here's the concept behind the new chain: Customers walk in and grab a to-go container of pre-made, healthful meals prepared by chefs who've previously worked in some of the finest restaurants in LA and New York. They can heat up the meals in microwaves at the restaurant, or take them home. And everything is priced affordably — though the price changes, depending on the neighborhood. The goal is to make nutritious food more available to everyone.

The first location opened this summer in South Los Angeles, a low-income area. The next one will soon open in a well-off neighborhood of downtown LA, and there are plans for outlets in other parts of the city. Each location will have the same exact menus and decor, but with different price plans.

Founders Sam Polk and David Foster spoke with Robin Young of Here & Now at NPR West in Culver City, Calif. Highlights from their conversation follow, edited for length and clarity.

On using their Wall Street experience 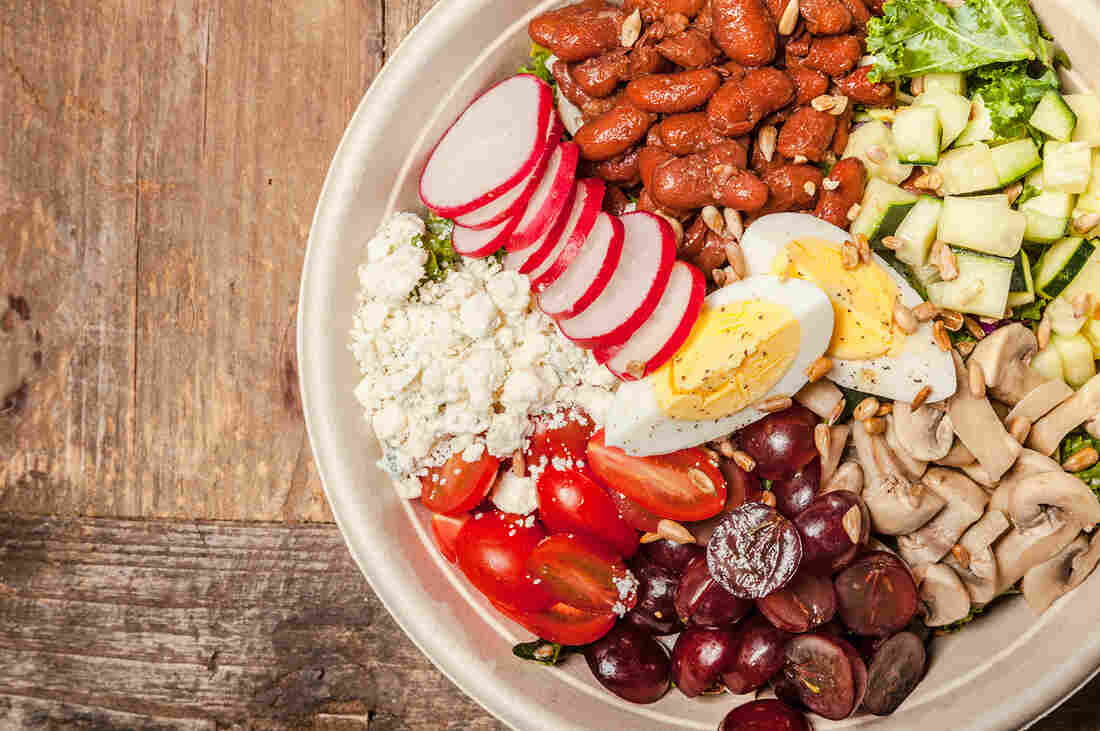 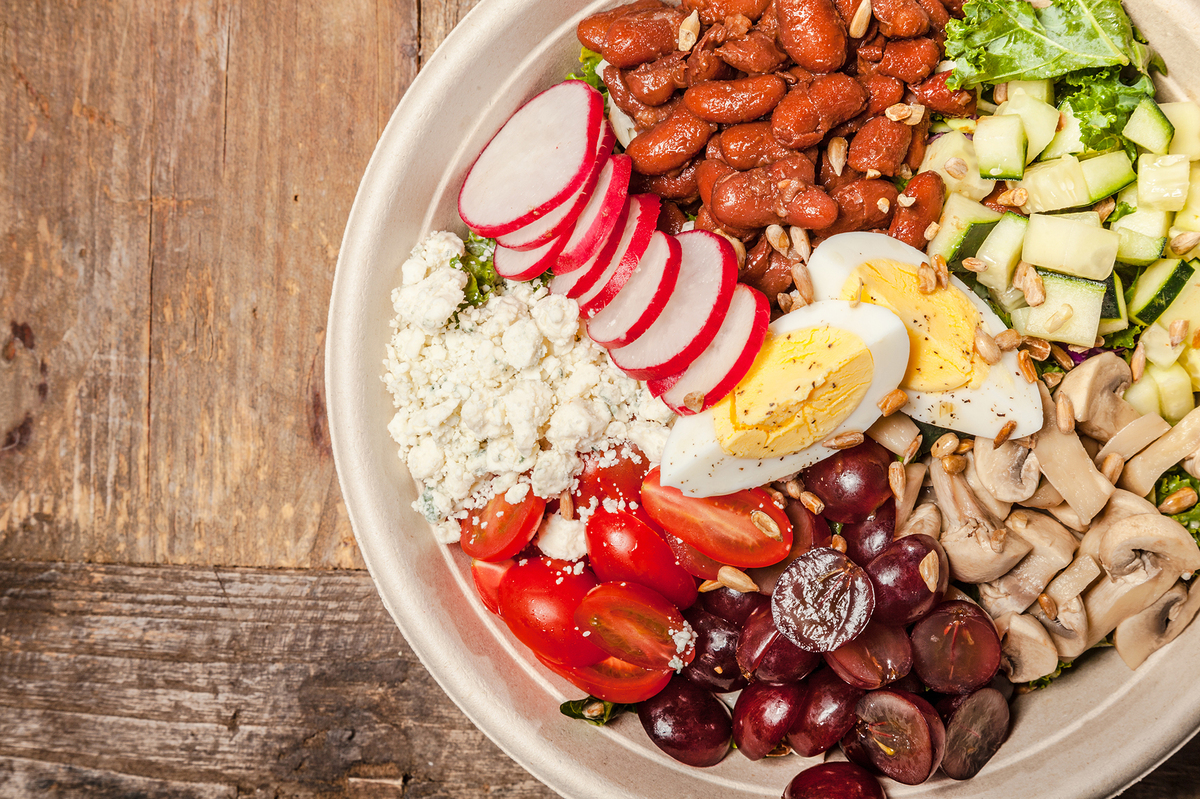 Sam: In 2013, I founded a nonprofit called Groceryships, which works at the intersection of poverty and food-related health issues like obesity and diabetes. Groceryships is in South Los Angeles, where per capita income is $13K a year. It helps parents who live in food deserts — places where there's very little fresh food and tons of fast food. It helps parents get healthy through a program that includes nutrition education, healthy cooking schools, fresh produce and emotional support groups. We kept hearing from a lot of the parents we were working with. Things like, "I need to get food on the go, and I don't have a lot of money. So I go to McDonald's."

I'm a former hedge fund trader, and David's a former private equity guy, and we basically took out our pencils and tried to figure out a concept for a business that would make healthy food that would be affordable for the families in the neighborhoods that Groceryships was serving.

On the difference between the two restaurant locations

David: At the location in South LA, we offer meals on average for under $4. We've got a variety of items like kale Caesar salad and a California Cobb salad, as well as some warm items like puebla chicken tinga and Jamaican jerk chicken. We offer some kids meals that sell for $2.95. The model for that store is to try to be priced affordably for the local community, but also priced competitively with what else is there — like fast food. ... The second location is opening up downtown, which is about 2 miles from the first one, but the demographics are quite different there. It's more of a professional crowd. That location is going to be offering the same meals, but for about $7.95 on average. We think that's priced really competitively with what's downtown, like Whole Foods and Sweet Green and Tender Greens. Those are great, healthy and fast options that typically cost about $10 to $12. So we think that even though it's twice the price [as the same meal you can buy at the South LA store] only a couple of miles away, it's still offering great relative value. 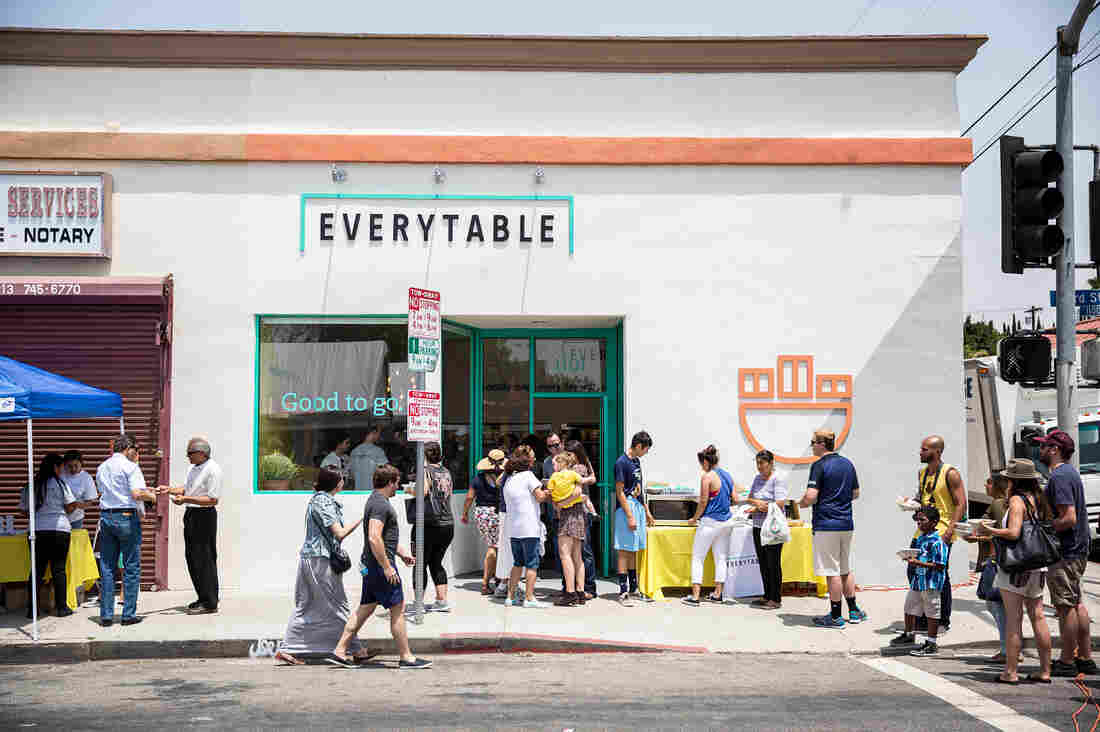 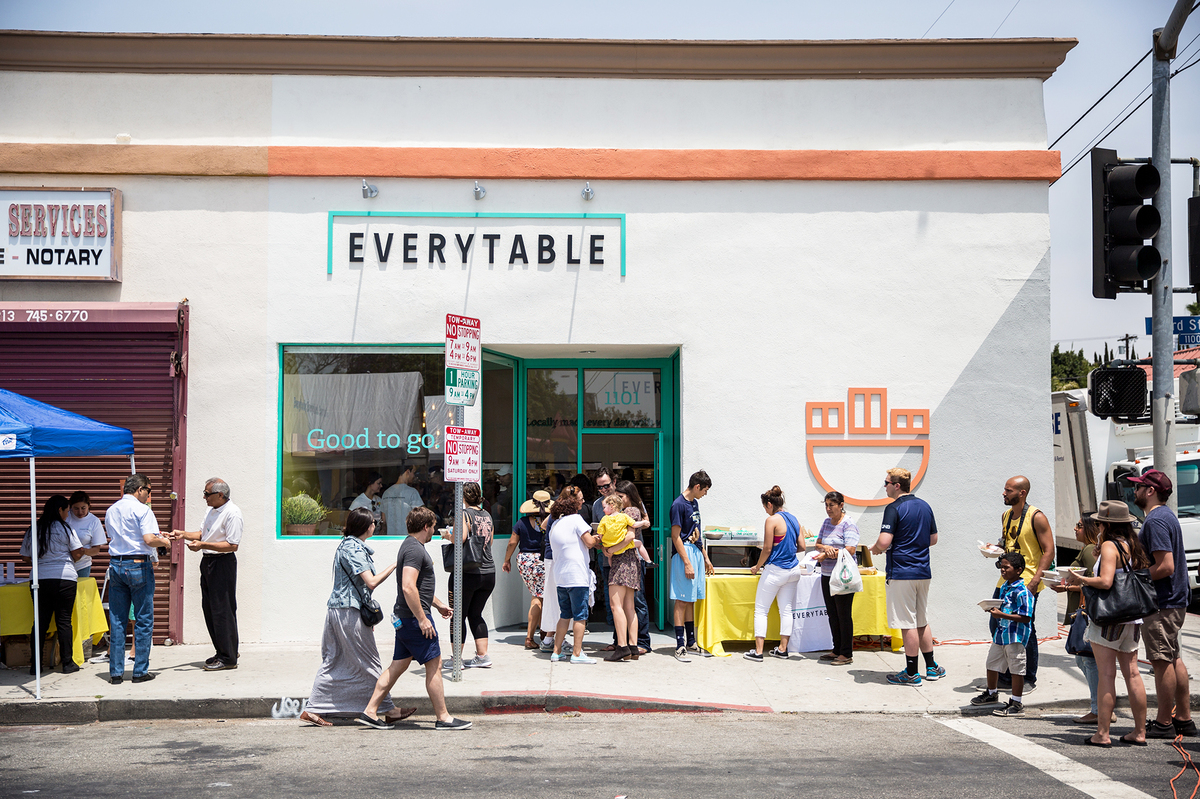 On the relationship between the two restaurants

David: Each store is designed to be individually profitable. At $4 per meal in South LA, we're not making much money from each meal sold. But if we get enough people to come out — and we're already seeing great traction — it will actually be profitable. The location downtown will also be profitable. So together they're part of this company that's working to improve access. The higher-priced location will help fund the growth of new locations in both markets.

On having one central kitchen 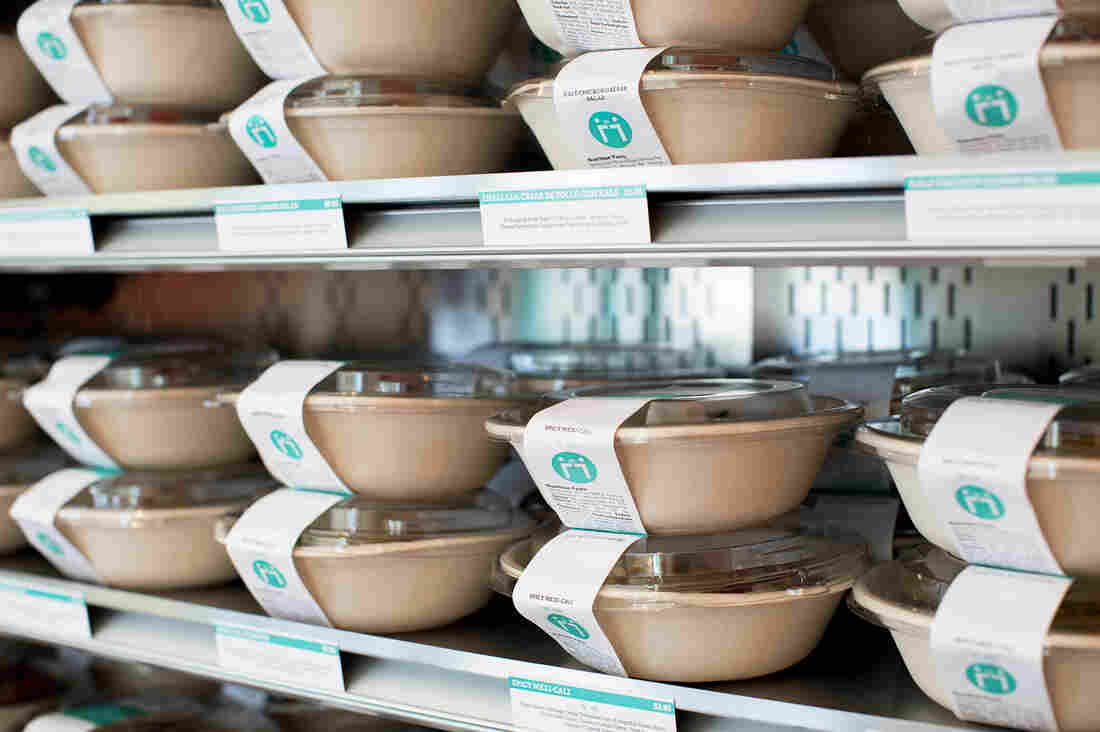 Everytable's meals are prepared in a central kitchen, then packaged in to-go containers. Customers can heat them and eat them at the restaurant or take them home for later. Courtesy of Everytable hide caption 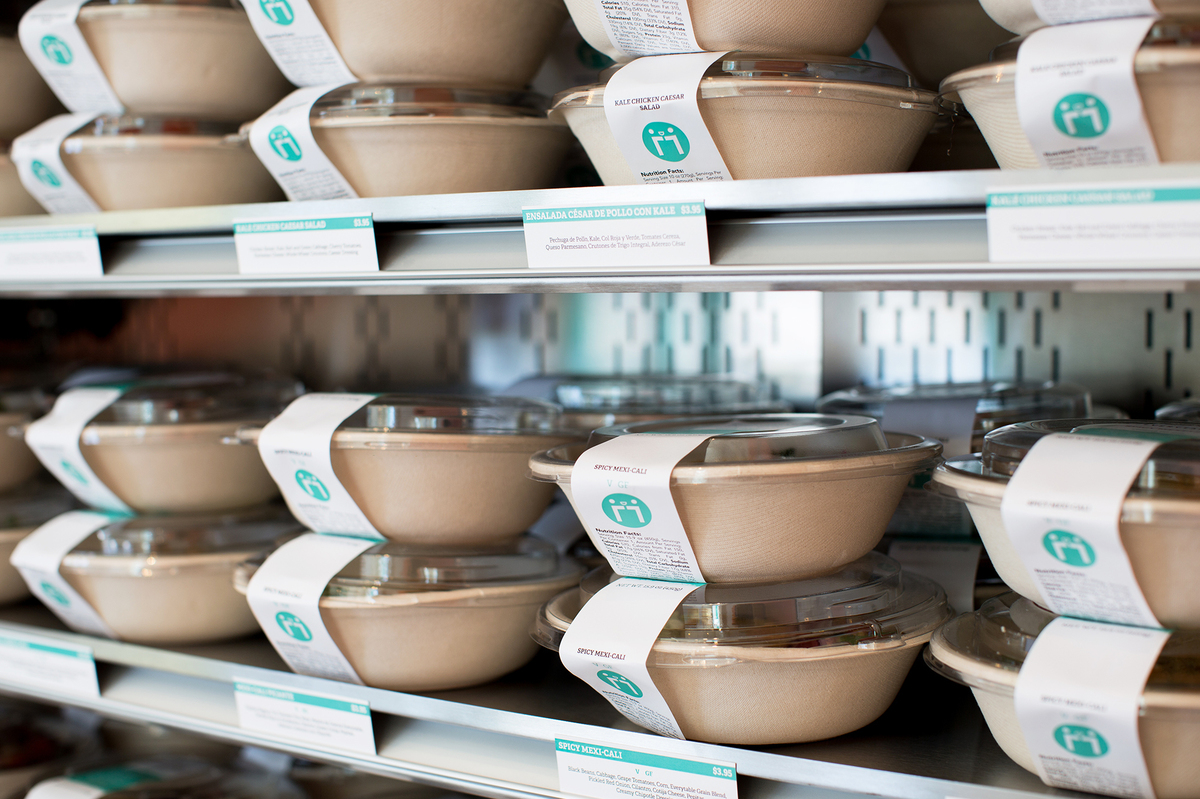 Everytable's meals are prepared in a central kitchen, then packaged in to-go containers. Customers can heat them and eat them at the restaurant or take them home for later.

Sam: The central kitchen produces a large amount of healthy food. We have two chefs: One is the former head chef of Le Cirque, one of the greatest restaurants in the country. The other was the head chef of a Culver City restaurant called A-Frame that was super hot and super local. They're creating these meals like the Jamaican jerk chicken and blackened fish that are ... mind blowing, and then at the commissary packaging them in grab-and-go containers. And that's a really simple but key economic insight. A standard restaurant is 2,500 square feet, has 10 to 15 employees and a fully built-out kitchen. Because of all those additional costs, they can't sell healthy food at a low price. But we open stores that are 500 to 750 square feet, and we don't need a commercial kitchen because all the food is already in containers. Because of that, we only need two employees in the store. So all of those savings are passed on to customers, who have these delicious, healthy meals that you can get faster than walking into a fast food place.

On changing attitudes about fast food

Sam: We actually think there's something of a misconception around this issue, which is that people in South LA have access to fast food largely because it's the only affordable solution. We know from our work with Groceryships, and now with the incredible sales that we've seen in the first month of Everytable, that there is high demand for healthy, nutritious food within the South Central community.

What people think of as healthy food is actually what people just called food 50 years ago. And by that I mean cultural traditions of incredible cuisine that have existed for centuries. And we're bringing those back. We're going to the communities that we're trying to serve and asking, "What are the meals in your culinary tradition that you love, but you don't see offered for a good price in a convenient manner right now?" And then we're creating those meals and selling them at a really attractive price. [Interviewer's note: Of course, there are small pockets of great little joints all over South LA that are making great food, but not enough right now to compete with fast food.]

This interview aired on Here & Now, a public radio show from NPR and WBUR in Boston.