Accessibility links
Let's Talk Tiki Bars: Harmless Fun Or Exploitation? : The Salt These faux-Polynesian bars first became popular in the 1960s. Now, they're making a comeback. But some Pacific Islanders say there is a darker side to these downtown slices of paradise. 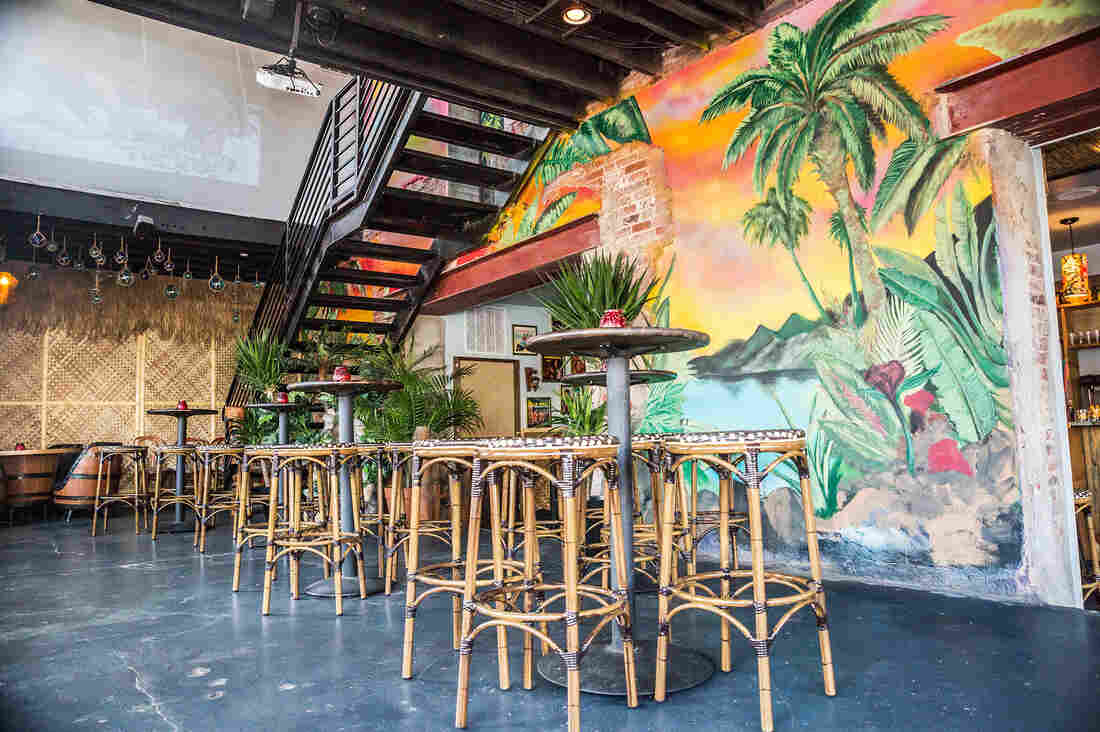 Archipelago, in Washington, D.C., is among a wave of new tiki bars across the country. But how do South Pacific islanders feel about tiki kitsch? Frank N. Carlson/Courtesy of Archipelago hide caption 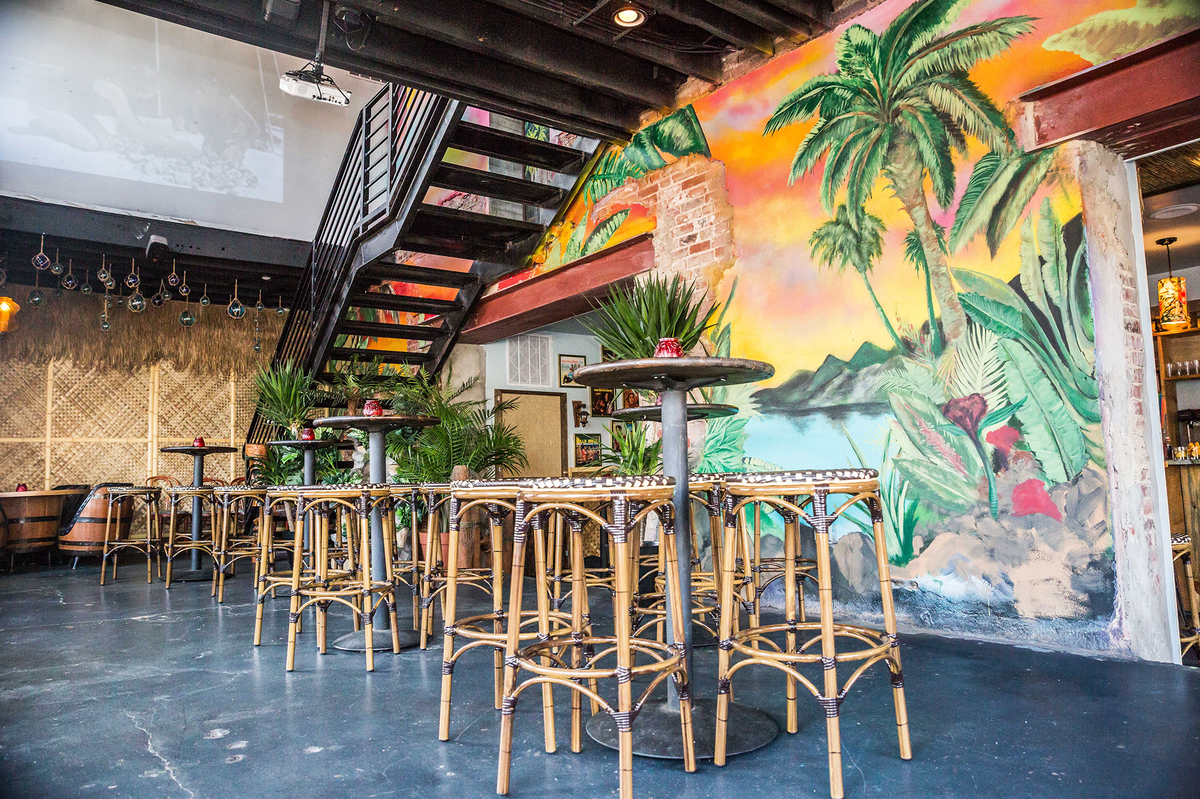 Archipelago, in Washington, D.C., is among a wave of new tiki bars across the country. But how do South Pacific islanders feel about tiki kitsch?

Say you want to escape the doldrums of daily life — but you can't quite afford a trip to Hawaii. Why not to head to your local tiki bar for a sample of the South Seas?

These faux-Polynesian, palm-thatched rum palaces that were all the rage in the 1960s are now making a comeback. Leading this nouveau-tiki movement are Lost Lake and Three Dots and a Dash in Chicago, Lei Low in Houston and Latitude 29 in New Orleans.

The newest, hippest island-themed establishment in Washington, D.C., is called Archipelago — and it's tiki-kitsch to the max. There are glass fishing floats hanging from the ceiling. A lamp in the corner is shaped like a sexy hula dancer. And by the bar they've got a shrine dedicated to our favorite Hawaii-based TV private investigator, the '80s-tastic Tom Selleck.

When I meet friends — husband-and-wife duo Eden and Angelo Villagomez — for happy hour here, our first drink is a communal one. It's served in a giant, hollowed-out pineapple and garnished with a flaming lime. The concoction inside is mostly rum, with a bit of fruit on top.

"Can we please put that fire out?" says Eden, looking skeptically at the drink. She and her husband are both from the western Pacific island of Saipan, and they tell me that bars in their hometown would never serve anything like this. But Angelo savors what our bartender calls the Pineapple of Hospitality. "This is potent," he informs us, as he slurps with verve, through his neon orange Krazy straw (being careful to avoid the flame). "I'm feeling that hospitality."

So how did we end up at this boozy, tropical oasis in the middle of buttoned-up Washington, D.C.? To answer that question, we've got to look back about 80 years, says Ken Albala, a professor at the University of the Pacific who runs its food studies program in San Francisco. 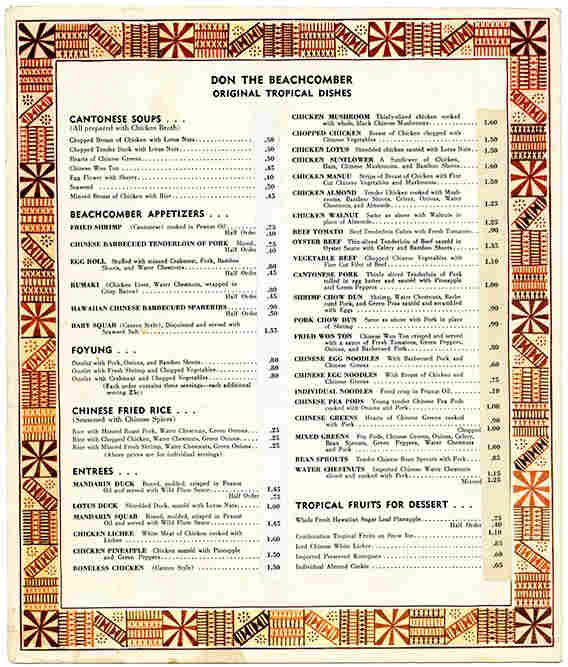 The menu at Don the Beachcomber from 1943. The restaurant opened in 1934 in LA, kicking off the tiki bar craze. The menu was loosely inspired by the tropical flavors that owner Donn Beach encountered during his travels in the South Pacific. California Historical Society/Flickr hide caption 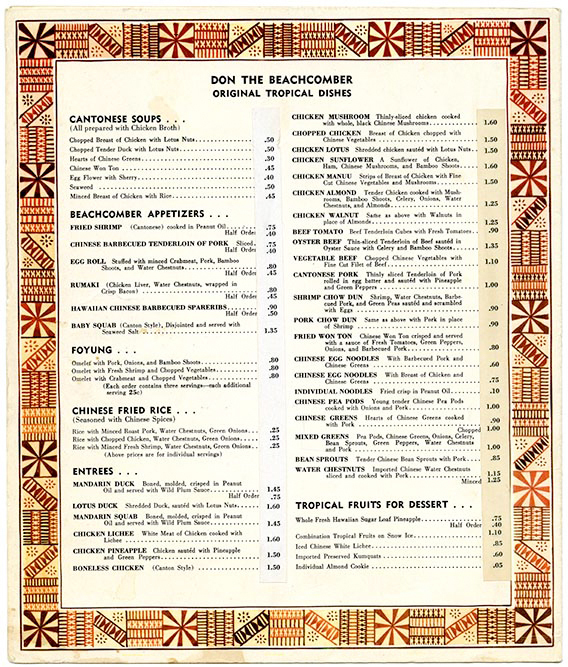 The menu at Don the Beachcomber from 1943. The restaurant opened in 1934 in LA, kicking off the tiki bar craze. The menu was loosely inspired by the tropical flavors that owner Donn Beach encountered during his travels in the South Pacific.

The first tiki bar, called Don the Beachcomber, opened in 1934 in Los Angeles ̶ and it's still operating. It was the brainchild of New Orleans native Ernest Raymond Beaumont Gantt, who traveled the world and explored the Caribbean and the South Pacific, before settling in LA, changing his name to Donn Beach and setting up his namesake restaurant and cocktail lounge. The menu was loosely inspired by the tropical flavors he encountered during his travels.

But the tiki trend didn't really take off until World War II, Albala says, when young men deployed to the war's Pacific theater were exposed for the first time to the South Pacific ̶ to Tonga and Fiji and Hawaii. They developed a taste for the tropical, which they passed on to the rest of the nation.

"It was a weird moment in history, when the whole country became fascinated with the South Pacific," Albala says, "just because it was unknown and exotic." Rogers and Hammerstein even came out with a fun musical. "Tiki bars and restaurants became wildly popular, Albala says, though they "made no pretense to being authentically Polynesian."

"The menus tended to feature this mish-mosh of pan-Asian fusion dishes," Albala says. Many tiki bars, oddly enough, served Chinese food, mostly because back in the '50s, Americans probably didn't know or care much for authentically Polynesian foods, he says. Chinese food was familiar, but still a bit exotic, "so they must have just decided, 'Well, that's close enough.' " 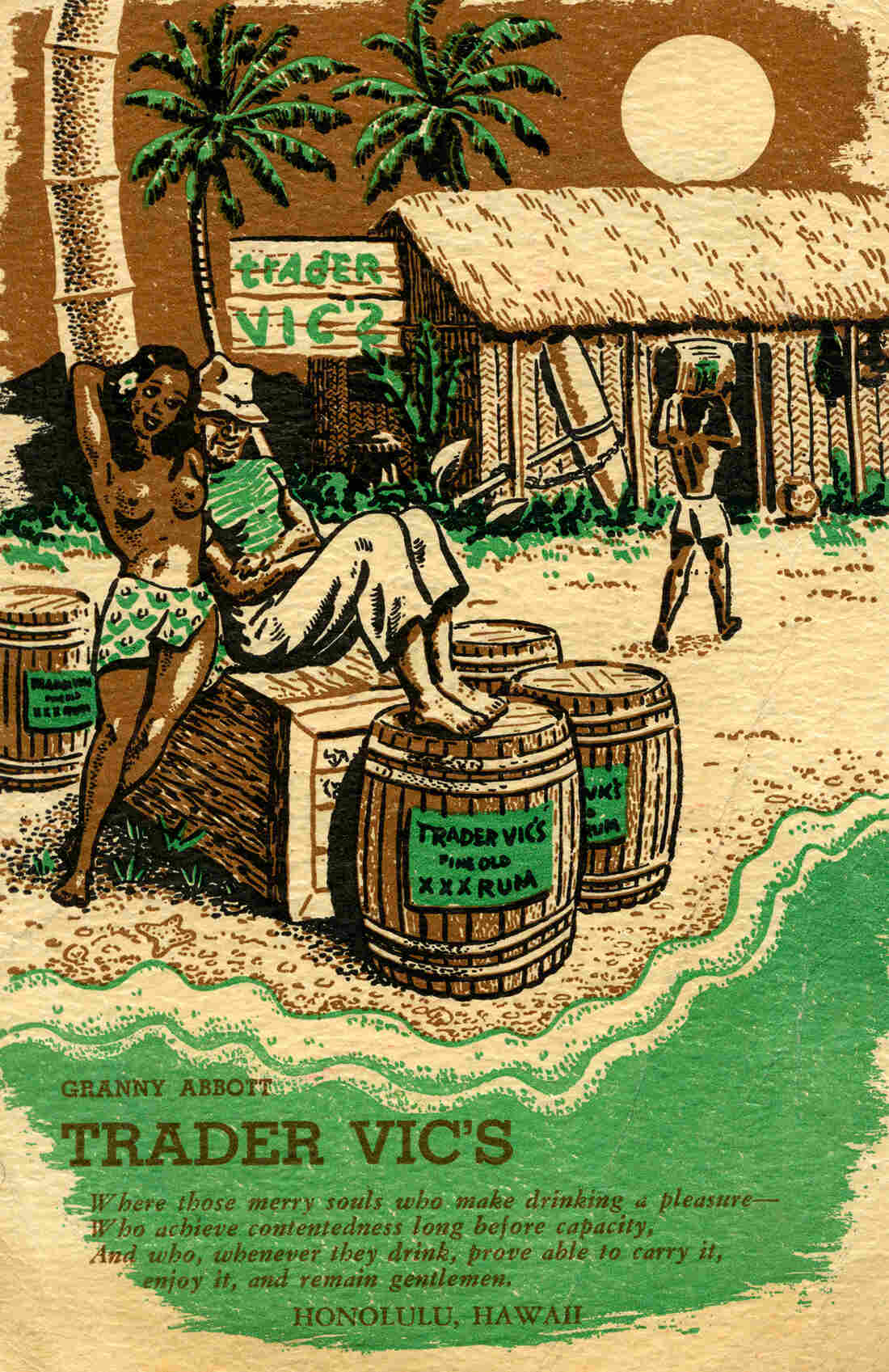 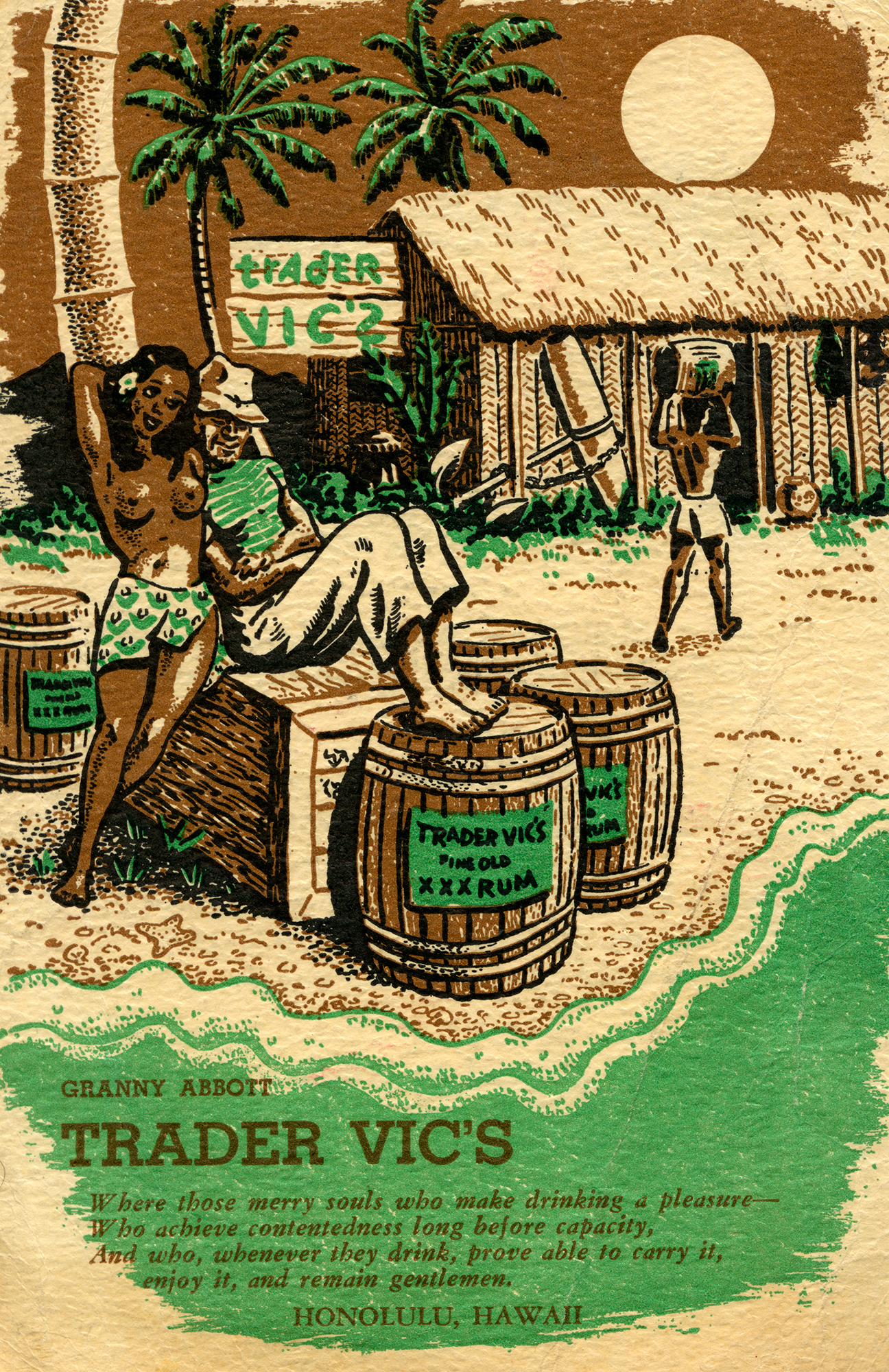 A menu for Trader Vic's from 1939. The lounge claims credit for having invented the well-known island-themed drink Mai Tai.

Of course, tiki decor draws from Pacific cultures. Tiki, after all, is a Maori word for a type of stone or wooden carving found throughout the islands. But the tiki bar "is just taking all those cultures and putting them all in a blender and blending it all together to create this Isle of Tiki, which is this mythical place where tiki bars come from," says Kalewa Correa, a curator at the Smithsonian's Asian Pacific Islander Center.

The man working the real blender at Archipelago, owner Owen Thomson, concurs. Tiki bars, he says, have always been "three steps removed from anything actually Polynesian." At his modern tiki bar, he says, "it's more about re-creating a piece of Americana, of that 1950s, 1960s style."

And, it's about re-creating "that whole ethos of escapism," Thomson says. "One of the reasons you're seeing tiki bars pop up all over America again is because ... all of us [are] staring at our phones all day, wrapped up in whatever stressful thing." The tiki bar gives us a reason to sort of step out of your daily life, he adds. "There's island music and big fruity rum drinks, thatch and bamboo everywhere and you just kind of like, let it all go for a bit."

Letting it go — that's something Type-A D.C. folks like me should probably do more often. But here's the thing: I'm drinking a piña colada out of a ceramic mug that's shaped like what's actually an important cultural symbol for the Hawaiians and the Maori and the Samoans. And that's something I should probably pause and consider for a minute, says Correa from the Smithsonian.

"What you're looking at — the carvings are either representations of gods, or they're representations of ancestors," he says. "So if we were to put that into a context that Americans would understand, it would be like going into a Christian-themed bar" with drinks served in glasses shaped like the Virgin Mary.

Pacific Islanders have, for the most part, ignored this whole trend, Correa says. "But seeing your ancient gods or your ancestors in a bar somewhere far from where you are — I think that can be hard."

Seeing his Hawaiian culture commodified and turned into kitsch can feel invalidating, he adds. "Really at the root of it, it's exploitation," he says. "It's ignoring the real lives, the real culture and the real problems that we do face."

Tiki bars can also feed into the idea that the islands are just a place to vacation or escape, he says, when in fact, Pacific islanders have real concerns — like climate change threatening their homeland, and their traditional ways of living.

Back at the bar, my companion Angelo Villagomez agrees, but up to a point. "We're seen as a place that's just a tourist destination," he says. "It's only a place that you go to to have fun." That doesn't sit well with many islanders, who think of themselves as earnest, hard workers, he says.

But he can understand why tourists become so enamored with the islands that they try to re-create the experience at tiki bars and restaurants. "There is something special about Pacific communities," he explains. "When people visit they do feel welcome, they do feel like they're part of the community." The "Aloha spirit," as they call it in Hawaii, is infectious. "I think bars like the one we're at," he says, "are sort of an attempt by people in the mainland to re-create some of that spirit. And maybe they're kind of re-creating it completely incorrectly. But I do think it comes from a good place."

Besides, he adds, he's really into his Pineapple of Hospitality. "I mean, I'm having fun; I've got good food, good rum" — not to mention a Krazy straw.

"The way we look in the popular culture is more an issue of identity," he starts to say before taking a swig of cocktail. But he loses his train of thought. "Man, this rum is good," he says, laughing. "What was your question again? Because I think rum is the answer."