Accessibility links
STEM To Steam: How Coffee Is Perking Up Engineering Education : The Salt Coffee can teach us many things, including engineering. At the University of California, Davis, it's now the focus of the most popular elective class on campus and of an ambitious new research center. 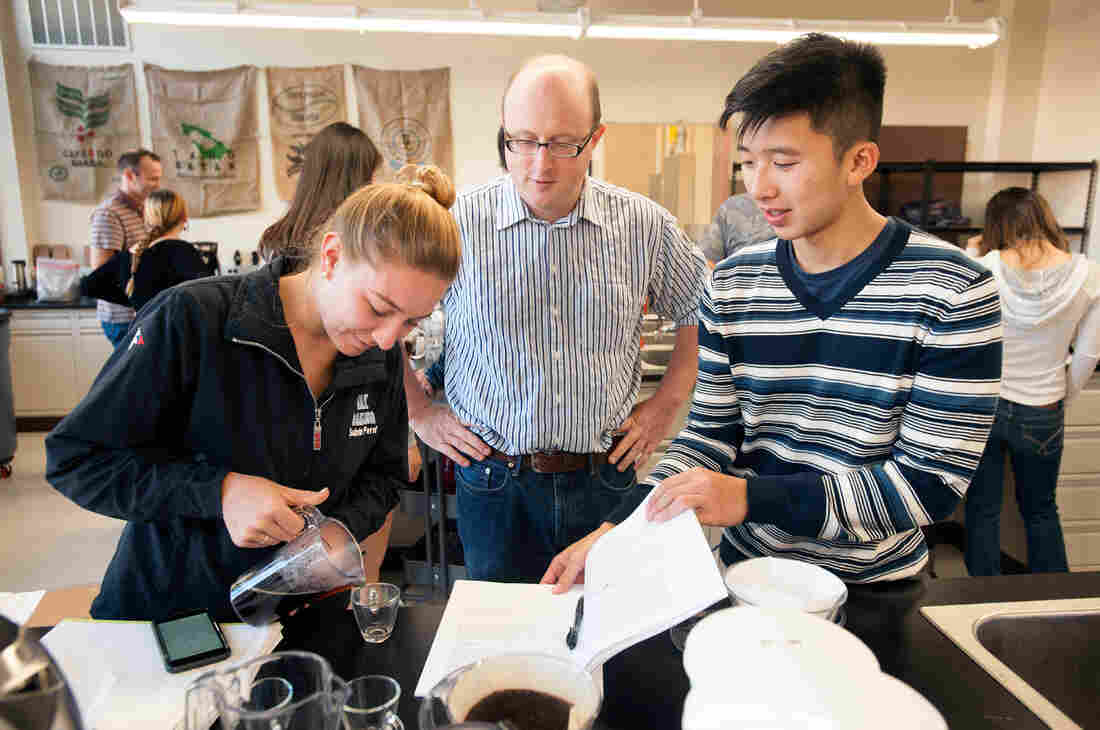 Associate professor William Ristenpart talks with Sabrina Perell, a community regional development major, and Kyle Phan, an undeclared major, about the taste of their brew during the Design of Coffee class last October at UC Davis. Students learn the science of coffee, from roasting to brewing. Gregory Urquiaga/UC Davis hide caption 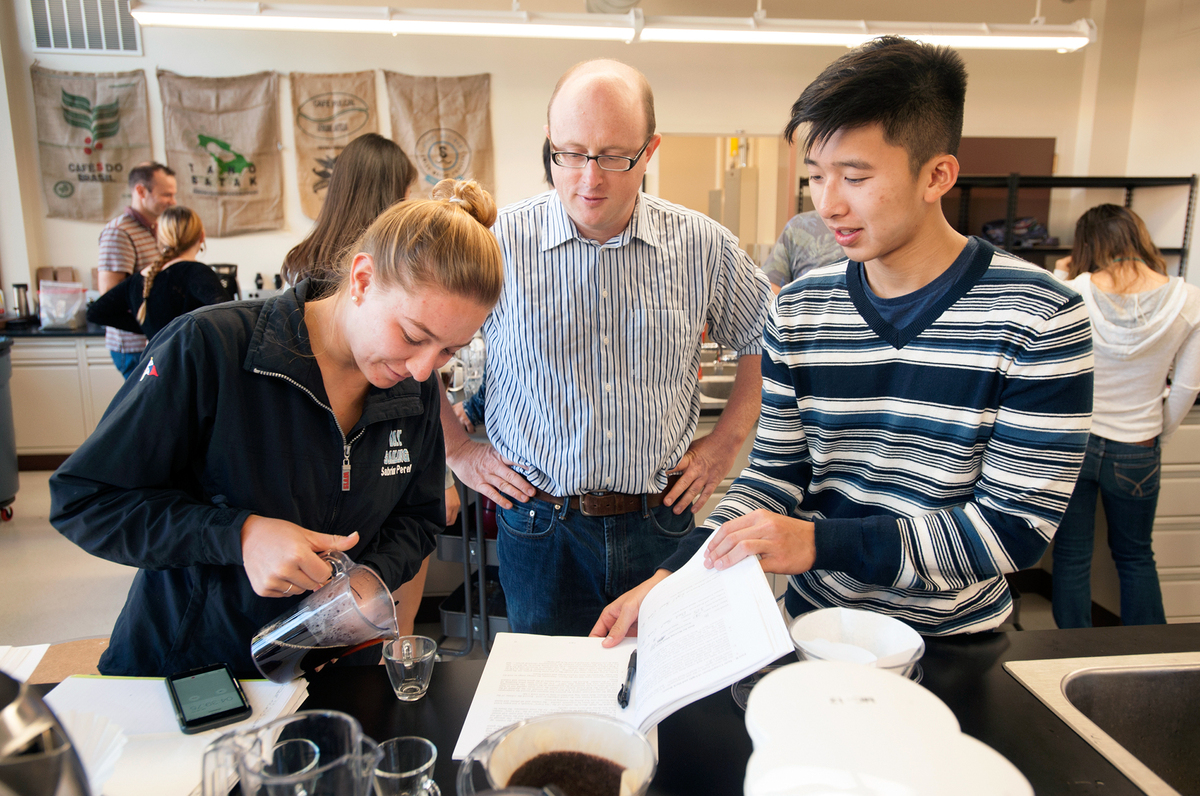 Associate professor William Ristenpart talks with Sabrina Perell, a community regional development major, and Kyle Phan, an undeclared major, about the taste of their brew during the Design of Coffee class last October at UC Davis. Students learn the science of coffee, from roasting to brewing.

Like so many brilliant innovations, the idea seems obvious in hindsight. Just combine college, coffee, and chemical engineering. Of course!

But no one, apparently, hit upon this magic formula until a few years ago, when William Ristenpart and Tonya Kuhl, two engineering professors at the University of California, Davis, started discussing ways to give young undergraduates a hands-on introduction to their new discipline. Engineering programs are creating such experiences in order to fight attrition; too many of these so-called STEM (science, technology, engineering and mathematics) students have been dropping out after a steady diet of mathematics in the first years of college.

Kuhl "had the idea of taking apart a Mr. Coffee coffeemaker" to study how the designers solved the small-scale engineering challenge of brewing coffee," says Ristenpart. As they talked, it dawned on Ristenpart that every aspect of coffee-making matched a major topic in the chemical engineering curriculum.

Think about all those chemical reactions when you roast the beans. "The roaster we use, a chemical engineer would call that a fluidized bed reactor," Ristenpart says. When hot water extracts tiny particles of flavor and oil from the ground-up beans, "we would call that mass transfer." And what drives hot water through an automatic drip-coffee machine? Fluid dynamics, of course.

Together, Ristenpart and Kuhl turned the coffee problem into a seminar for first-year engineering students. The first year, in 2012, they had 18 students. The next term, 300 students signed up. Last year, the course, called Design of Coffee, was the most popular elective class at the entire university. It fills the largest lecture hall on campus. Last year, the course was offered each term, and more than 1,500 students took it — roughly a quarter of the freshman class. Most of them weren't even engineering students.

"We have an army of teaching assistants," Ristenpart says. "Every graduate student wants to work with this class."

In the coffee lab, teams of students start with identical unroasted coffee beans and compete to produce the best-tasting product. Ristenpart says they end up with "wildly different" version of coffee. Last term's winner blew away the competition with an "aeropress" method, similar to a French press, that produced coffee with a smell that reminded people of blueberries.

Molly Spencer, a graduate student in the Food Science department, has been a teaching assistant for the course. She says it's perfect for college students.

"That's when people start drinking coffee, a lot of times, so it's very relevant for their personal lives, too," she says. According to Spencer, the class turns some of these "overcaffeinated undergrads" into more discerning coffee consumers. They learn, for instance, to appreciate coffee just as it is, without any milk or sugar added.

Ristenpart and Kuhl's idea, in fact, keeps on growing. The Specialty Coffee Association of America heard about it and encouraged the two professors to create not just a class, but an entire center devoted to research on coffee.

Ristenpart says there's a gaping void of academic research on coffee-making. Scientists might study what happens in the green coffee beans when they are fermented, immediately after harvest, or ways to "maximize the transfer of flavor molecules that you want" into your cup during the brewing process, while leaving those bitter-tasting molecules behind.

Ristenpart is now director of the UC Davis Coffee Center, which is starting to take over a newly vacant, 6,000-square-foot building on the UC Davis campus. It's not far from the Robert Mondavi Institute for Wine and Food Science, a world leader in research on grapes and wine, which Ristenpart sees as a model for his work. "There's nothing like it for coffee," he says.

The first grant was announced this week. Peet's Coffee is donating $250,000 to help renovate the building and build a pilot coffee roastery.