Accessibility links
This Hearty Stew Is A One-Pot Lesson In Grenada's History : The Salt Just about every ingredient in oil down reflects Grenada's cultural melting pot: from the callaloo greens cultivated by early Amerindians inhabitants to the turmeric brought by South Asian immigrants.

This Hearty Stew Is A One-Pot Lesson In Grenada's History

This Hearty Stew Is A One-Pot Lesson In Grenada's History 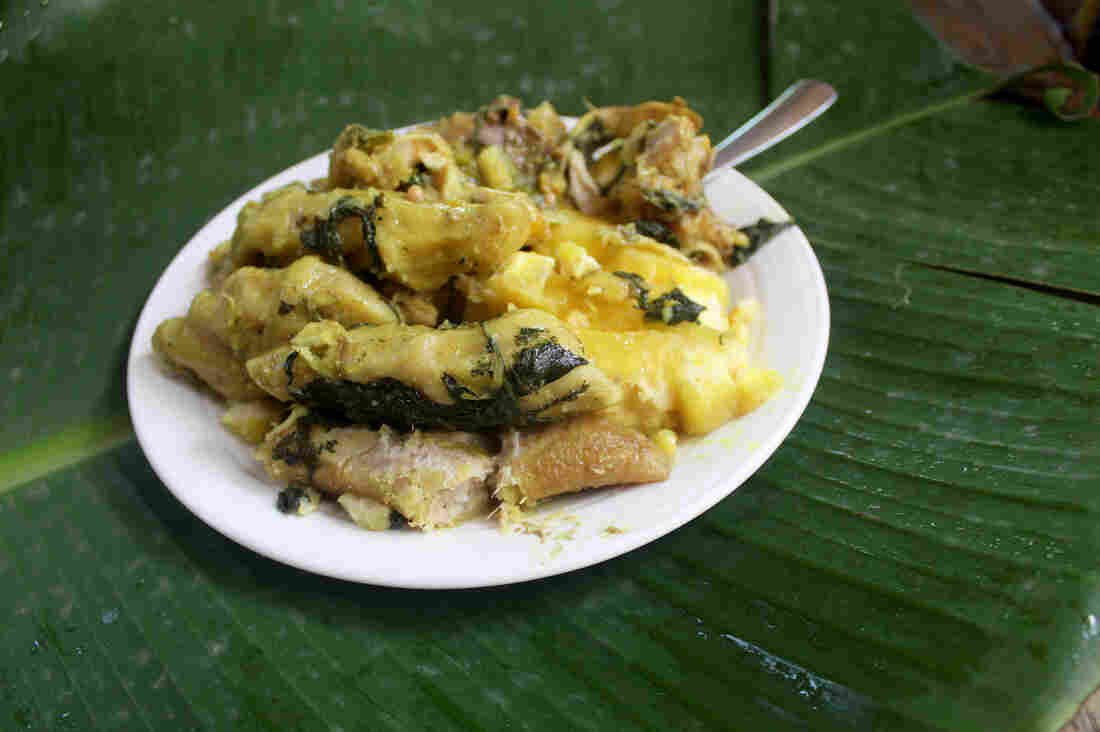 Oil down, Grenada's national dish, is a melting pot of its cultural history. This hearty stew is made of local veggies, salted meat and aromatic spices. It's a dish prepared cookout-style at social gatherings, where everyone brings something to put into the pot. Scott Neuman for NPR hide caption 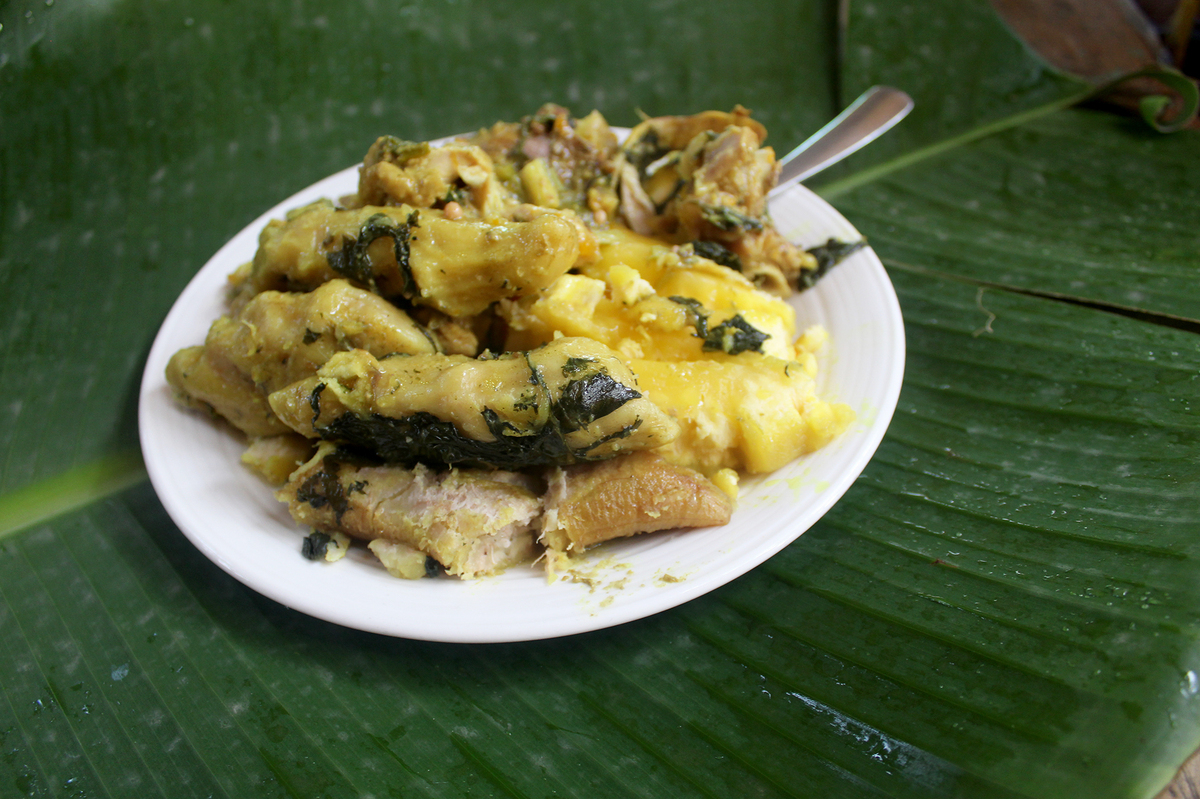 Oil down, Grenada's national dish, is a melting pot of its cultural history. This hearty stew is made of local veggies, salted meat and aromatic spices. It's a dish prepared cookout-style at social gatherings, where everyone brings something to put into the pot.

When describing the cultural history of the Caribbean island of Grenada, it's the cooking pot rather than the melting pot that springs to mind. And there's no better culinary metaphor than "oil down," the peculiarly named national dish of Grenada, a mix of meats and vegetables.

Nearly every ingredient in this hearty stew has a unique origin and story to tell: For instance, callaloo, a leafy vegetable somewhat similar in taste to spinach, and the same plant's root, known as dasheen, are indigenous to the Caribbean and were cultivated by Grenada's earliest Amerindian inhabitants.

Beginning in the 16th century, bananas came from Asia via European explorers and settlers. A few centuries later, slaves from West Africa were brought here to work in the sugarcane fields, and with them came their tradition of one-pot meals.

Pig snout and tails were scraps from the plantation master's house. Salted fish (originally cod) imported from Canada was meant as a cheap source of food for the slaves. So was breadfruit, that starchy, nutrient-packed fruit famously associated with the 1789 "Mutiny on the Bounty." This South Pacific staple arrived in the Caribbean on a subsequent expedition led by the hapless Capt. William Bligh. Decades later, turmeric — known locally (and confusingly) as "saffron" — was introduced by South Asian immigrants, who themselves were meant to fill the labor vacuum left by emancipation in the 1830s.

Although the island nation has been independent from Britain for barely four decades, most Grenadians are quick to note (with a hint of patriotism) that the mélange of colors in oil down are reflected in the country's flag – green for callaloo, red for carrots and gold for the curry-like hue of the turmeric. 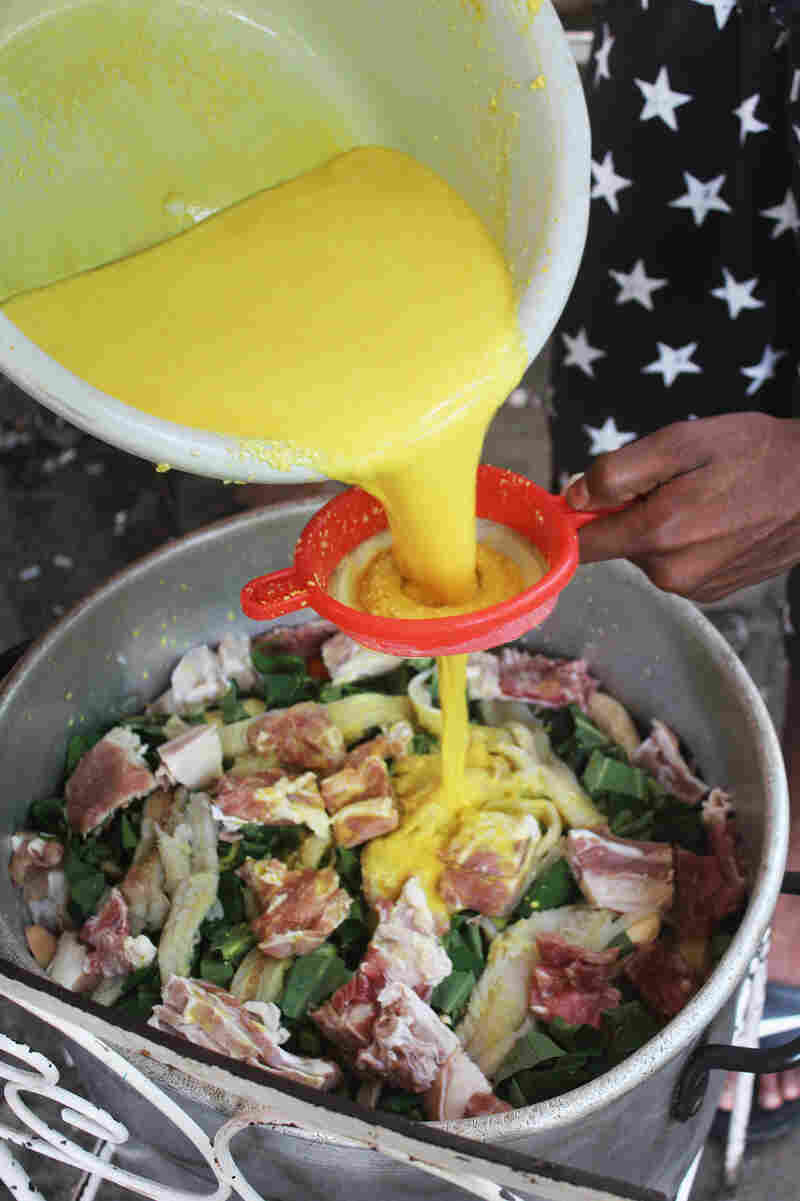 Turmeric — known locally as saffron — is mixed into coconut milk and poured over meat in the oil down pot. Scott Neuman for NPR hide caption 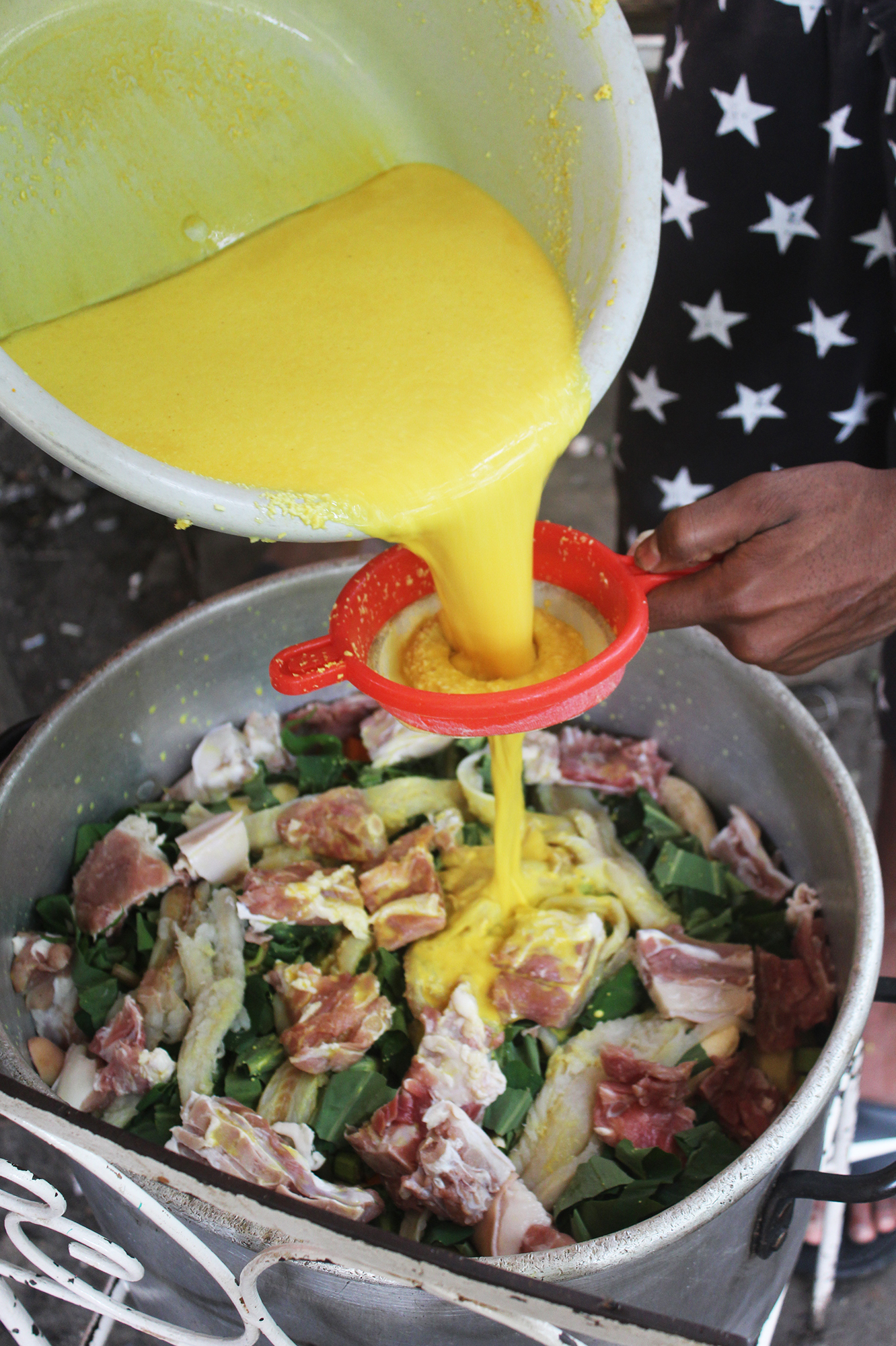 Turmeric — known locally as saffron — is mixed into coconut milk and poured over meat in the oil down pot.

Today, oil down – which gets its name from the layer of coconut oil and meat juices that settle to the bottom of the cooking pot — is a staple at the family table and at special gatherings, during the annual Carnival bacchanal or simply as a weekend feast.

"Oil down is a social thing," says Simeon Cornwall, a television producer who has researched the history of the dish for Grenada's National Museum. "If you're cooking oil down, it's because you have a group of people gathering to eat."

At such gatherings, everyone brings something to put in the pot, says Karen Hall, the owner of Patrick's Local Home Style Restaurant near the capital, St. George's. At home, it's usually a woman making oil down; however, much like a backyard barbecue in the United States, "at a block party or a beach party, really whenever there's a bit of excitement, the men like to take over the cooking," Hall says with a grin.

Even so, the matriarchal line is where the oil down meme gets transmitted. Esther Benoit, a chef at the Dodgy Dock restaurant on Grenada's south side, says for her, it's about the way her mother used to make it. "Even today, as a professional cook, I am still influenced by how she made it," Benoit says. Some of her oldest memories of oil down the dish are about the sibling rivalry with her sister "over which of us got the most dumplings," she says, referring to the dense balls of spindle-shaped dough that are a staple of many Caribbean soups and stews.

The actual recipe for oil down, which can vary considerably from household to household, has "evolved over time," notes Shirma Wells of the Grenada Tourism Authority. For example, today some Grenadians prefer to leave out the lesser parts of the pig, she says. "Conch and crab are thrown in the pot in some families, and there's also a vegetarian version."

Preparation, though, is not for the faint-of-heart. It takes a village, as demonstrated by a neighborhood gathering I recently attended in the Grenadian town of Belmont.

It all begins with identifying ripe breadfruit and knocking it off the tree with a long stick, followed by lots of peeling, chopping and kneading of dumpling dough, culminating in the minimum one-hour of cooking time. It can take up most of a morning or afternoon. However, time isn't the only thing consumed: At the feast I witnessed, the whole process was fueled by liberal doses of high-octane white rum. 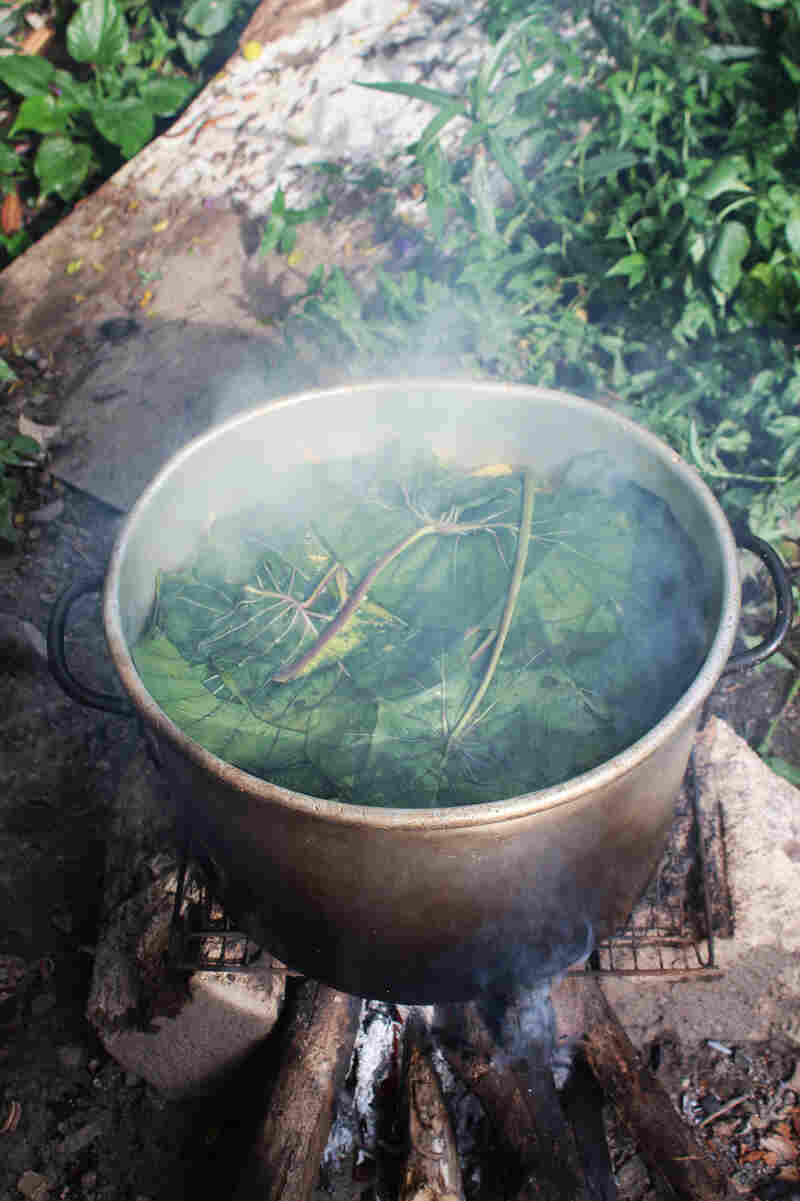 This steaming pot of oil down, with callaloo leaves on top, is ready to eat. Scott Neuman for NPR hide caption 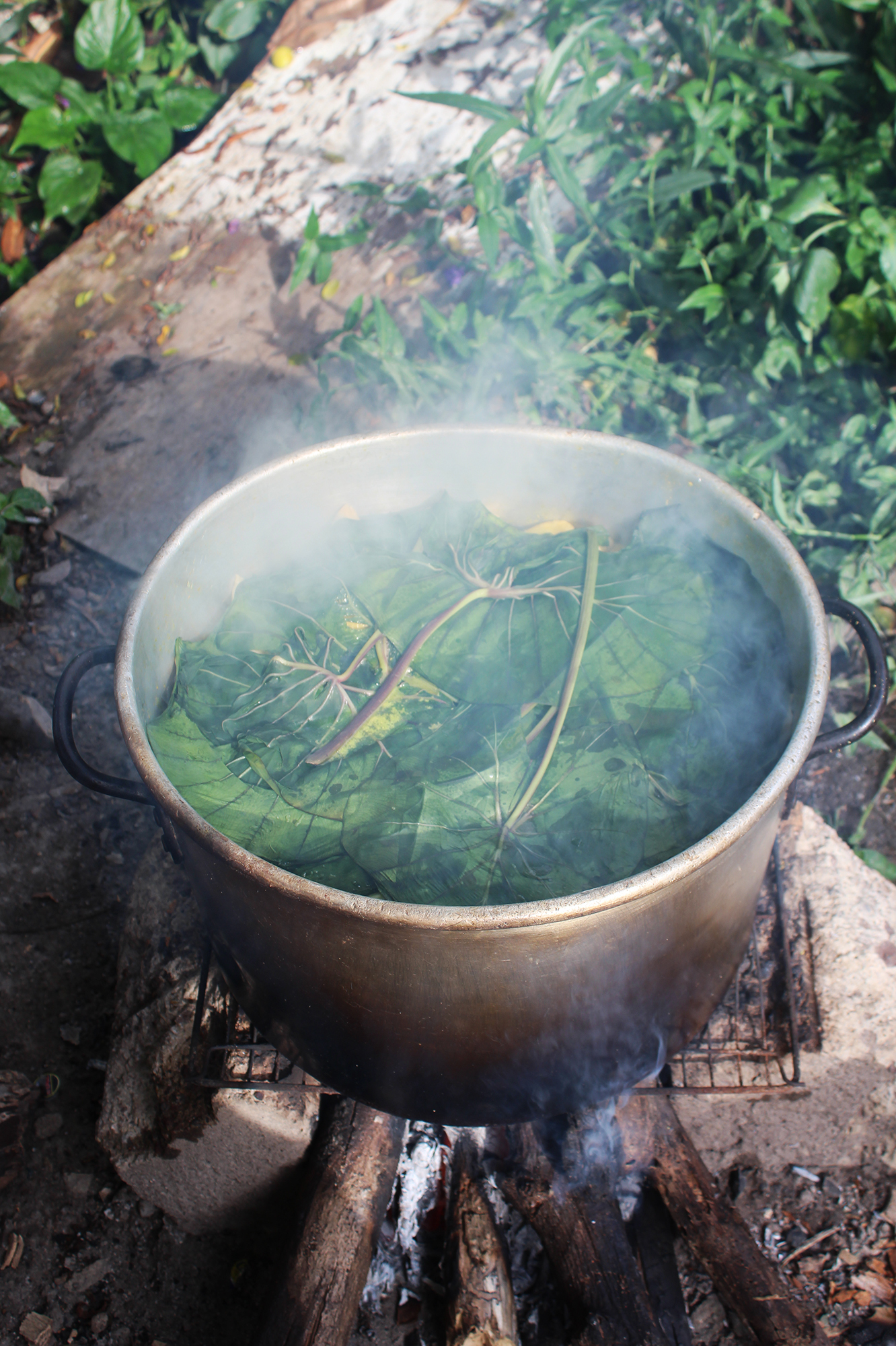 This steaming pot of oil down, with callaloo leaves on top, is ready to eat.

Unlike most stews, in which the ingredients get a thorough mixing during the cooking process, a pot of oil down is "packed." Exactly how to "pack the pot" is a matter of taste and tradition, as well as a subject of occasional controversy. Everyone has a different order and method, but usually the breadfruit and meat goes on the bottom, most of the vegetables in the middle, and the callaloo leaves and dumplings on top. The ingredients simmer in situ.

A few caveats about this dish: An American palate might be put off by the amount of starch. Oil down could also strike some as a bit salty, but eliminating the sodium-rich fish (or pre-soaking it) will likely rectify that.

And unless you live in a town that has a well-stocked international grocery, you will probably have some difficulty finding callaloo and dasheen. For callaloo, you can substitute spinach and the dasheen can simply be left out – alterations that even many Grenadians will grudgingly approve. For breadfruit, yams or potatoes are a decent substitution. The bananas should be green.

But still, what about that name that sounds more like a sports massage than a comfort food?

"When tourists see it on the menu, they always ask if it's something that has a lot of oil," restaurant owner Hall says with a laugh. "I admit, it's a tough name."

This is a fairly simple version of oil down, based on a recipe on the official website of the Government of Grenada.