Accessibility links
India's War On Biryani Mixes Caste, Religion, Cow-Avenging Vigilantes : The Salt In an effort to save the sacred cow, one Indian state is attacking biryani, the much-loved rice and meat dish. The police are collecting biryani from homes and shops to test if it contains beef. 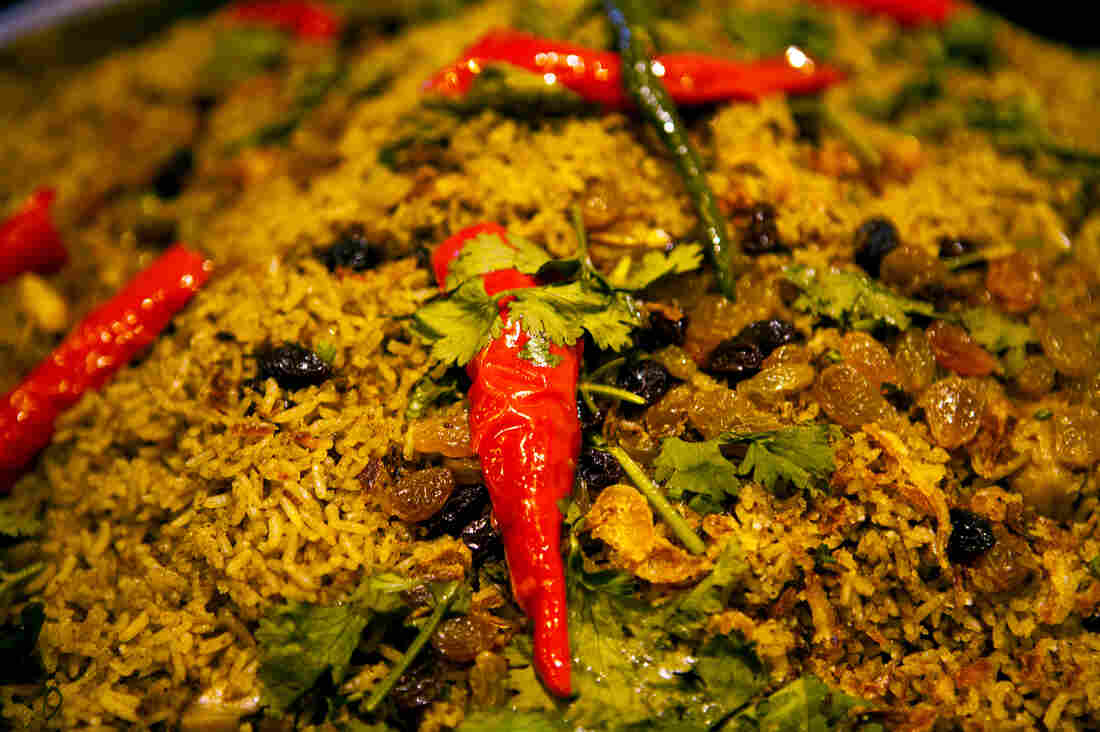 Biryani is a popular South Asian dish made with rice and meat, fish or vegetables. Though it is rarely made with beef, it has recently become the target of some Hindu activists in India who want to protect the holy cow. John S Lander/LightRocket via Getty Images hide caption 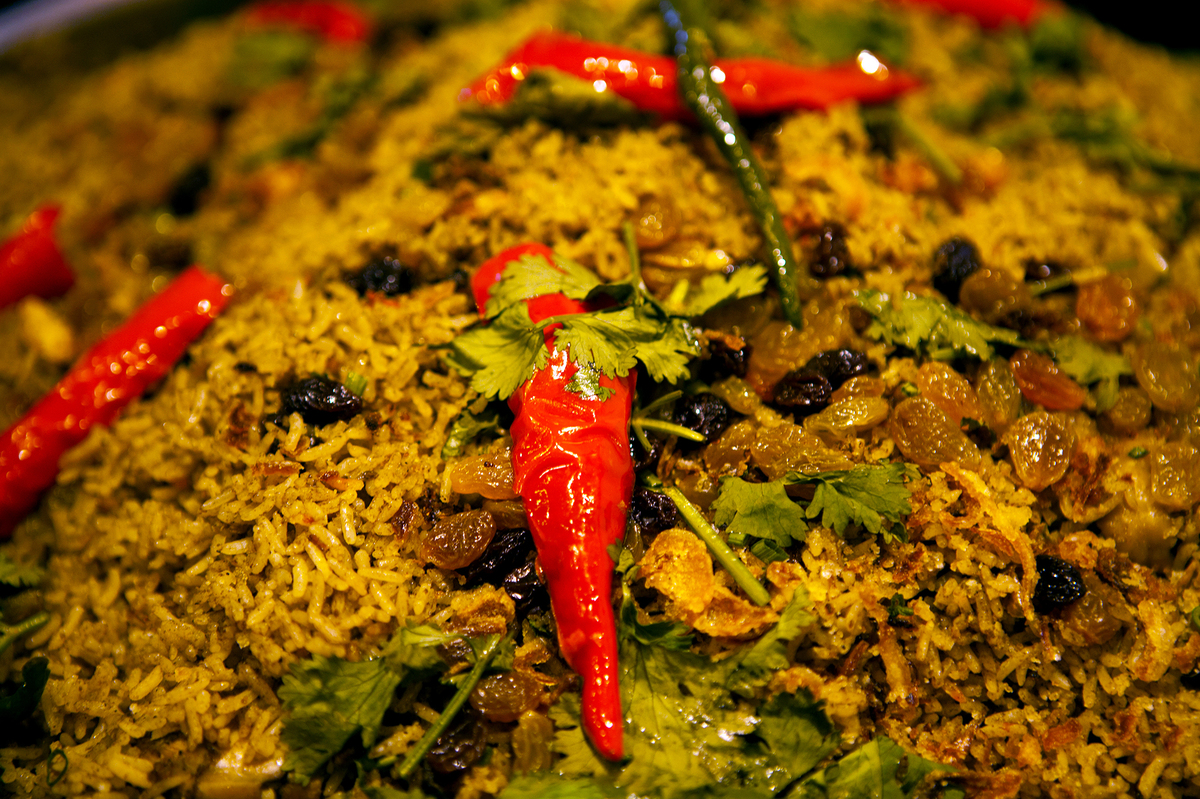 Biryani is a popular South Asian dish made with rice and meat, fish or vegetables. Though it is rarely made with beef, it has recently become the target of some Hindu activists in India who want to protect the holy cow.

A legendary South Asian dish has suddenly found itself in the midst of a war in India. Made up of layers of meat and rice and cooked with fragrant spices, the dish is the much-loved biryani. And the latest battlefield is in the northern Indian state of Haryana.

The police there have been collecting biryani samples from households and shops in Muslim districts like Mewat, to check if the meat in the biryani is beef – the consumption of which is anathema to many Hindus. It's the most recent chapter in an ongoing battle over religious and caste identities playing out through food in India, sometimes with dark consequences.

"The battle around food is not just about eating," says social scientist Shiv Viswanathan, professor at Jindal Global Law School in Haryana. "Food is essentially the grammar of society. You show hospitality through food. You can also insult someone through food."

That's why this biryani surveillance feels so loaded. Biryani, unlike other Indian favorites, has Muslim roots. It's a one-pot dish that is thought to have come to the subcontinent centuries ago via the Mughals (old Muslim rulers from Persia and Central Asia) who gave India the Taj Mahal and also rich Mughlai cuisine.

"Everything is cooked together, rice and meat," says Nadim Amin, whose family has owned Aminia restaurant in Kolkata since 1929. "Perhaps that made it perfect to feed an army on the march." Biryani, he says, became the dish of both the barracks and the royal courts. And while beef biryani isn't common in India, Muslims do eat beef.

Many Hindus, on the other hand, do not eat beef, because cows are sacred in their religion. That's long made beef-eating contentious in India.

The recent raids for beef biryani were ordered by Haryana's Cow Service Commission, whose mission is to look after the welfare of cattle. There's now a 24-hour helpline so people can report incidents of cow slaughter.

"Selling beef openly is difficult," Bhai Ram Mangla, the chair of the commission, told the Times of India. "According to the complaints we received, the vendors are mixing a little rice with the meat to camouflage it."

Cow slaughter is illegal in Haryana: In 2015, the state government passed a law that punishes the slaughter of cows with up to 10 years in prison. Over 20 Indian states forbid either cow slaughter or beef eating or both. As a result, access to beef, which is consumed by Muslims, as well as Christians and lower-caste Hindus, is difficult in many states. Most of the biryani sold in India is goat (called mutton here) or chicken.

And yet, India has witnessed an uptick in cow vigilantism in the past couple of years. The ruling political party, the BJP, has as its ideological parent the right-wing activist group Rashtriya Swayamsevak Sangh (RSS), which wants to unite the Hindu community and build a Hindu nation. And there's a plethora of other civil society organizations that also want to enforce their idea of a Hindu state, cow protection and all, says Visvanathan. "The civil society behaves like the state," he says. "Every time they misbehave, the state keeps quiet."

Perhaps the most shocking incident of violence came in September 2015, when an angry mob in the northern state of Uttar Pradesh set upon a Muslim ironsmith on the suspicion that he had slaughtered a calf. He and his son were dragged out of their homes and kicked and beaten. He died from his injuries; his son survived. The meat in their refrigerator was taken away for forensic analysis. The prime minister said nothing about the violence for weeks.

The biryani raids in the name of cow protection are often based on rumors and suspicion, says Shail Mayaram, a professor at the Center for the Study of Developing Societies in New Delhi, who has written extensively about the history of Mewat, Haryana. "The response in Mewat is fear and worry because [Muslims] have been hounded for cow killing since the '80s, even though many of their [village societies] have banned cow slaughter."

The irony is that Mewat's community is majority Muslim, but it also has a history of rich plurality, says Mayaram. Some Muslims of Mewat claim they descended from the Hindu god Krishna. The women there follow many rituals associated with his worship. "Our current polarized discourse does not allow for the possibility that there can be Hindu-Muslim communities that are hyphenated in their belief and practice," says Mayaram.

The beef hunt is not just affecting Muslims. Dalits, the communities once called India's untouchables, are often responsible for disposing the carcasses of cows, selling their hides to tanners, their meat to butchers. They do it because upper caste Hindus are loath to take on that task – they consider the work impure. And yet, earlier this summer, four members of a Dalit family in Gujarat were stripped half-naked and attacked with iron rods and sticks for skinning a dead cow.

After the Dalit attacks caused a national uproar, the Indian prime minister finally spoke up in August against the latest round of vigilantism, saying states should take "stern action" against such vigilantes. He said 70 to 80 percent of them were just anti-socials, anyway, in the garb of cow protectors.

Cow protection is often about reminding minorities like Muslims that they live in a Hindu majority country, say critics. And that brings us to the biryani.

Hindu supremacist groups "actively seeking to make 'biryani' a signifying cuss word in reference to Muslims," writes Shivam Vij, a well-respected Indian journalist. The very phrase "biryani eater" can be used as a loaded term, turning its Muslim pedigree into a signifier of dubious loyalty.

In Haryana, the latest raids are making biryani lovers nervous. "I always carried biryani back when I would go to a place like Hyderabad," a city known for its version of biryani, says Visvanathan. "Now I would think twice before bringing it back to Haryana."

But elsewhere in India, biryani lovers remain unperturbed. It's a regular item on many restaurant menus. "Once, you could only get it in Mughlai restaurants like ours," says Amin. "But in the last 20 years there are little shacks selling biryani everywhere. The quality is not good, but it's convenient, a meal in a box."

This week, Kolkata will celebrate Vishwakarma Puja, the Hindu festival worshipping the god of craftsmen and factory workers. Amin says his restaurants will sell boxes of biryani by the hundreds because it's such a local favorite for a festive occasion, even a Hindu one.

Last week, when I went to a famous biryani restaurant in Kolkata, it was bustling, customers ordering without even glancing at the menu. Plates of fragrant biryani appeared within minutes. Cooks braised mutton on giant iron plates over an open fire, while waiters hollered orders: "Two biryanis, mutton! One chicken tikka kebab."

It's just another day in a biryani restaurant. But in some parts of India these days, it could be mistaken for a battle cry.

Based in Kolkata, Sandip Roy is the author of the novel Don't Let Him Know.

A previous version of this story misidentified Nadim Amin's first name as Navid.