Accessibility links
If You Think Eating Is A Political Act, Say Thanks To Frances Moore Lappe : The Salt When Frances Moore Lappe wrote the best-selling Diet For A Small Planet back in 1971, she helped start a conversation about the social and environmental impacts of the foods we choose. 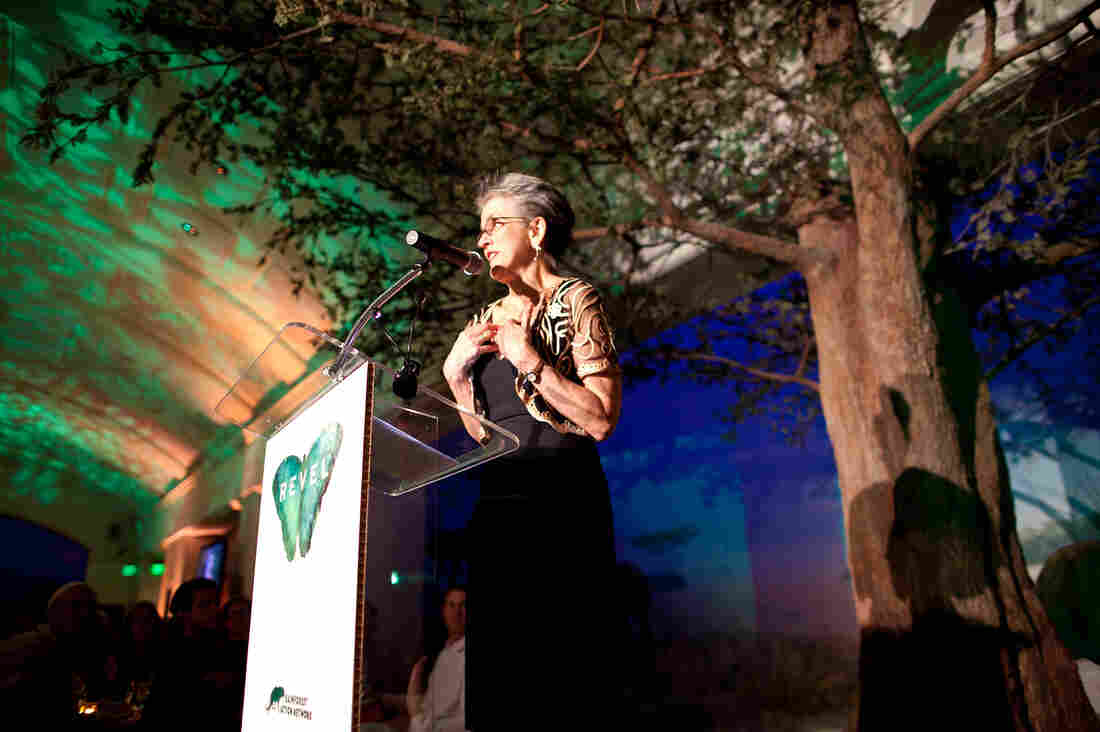 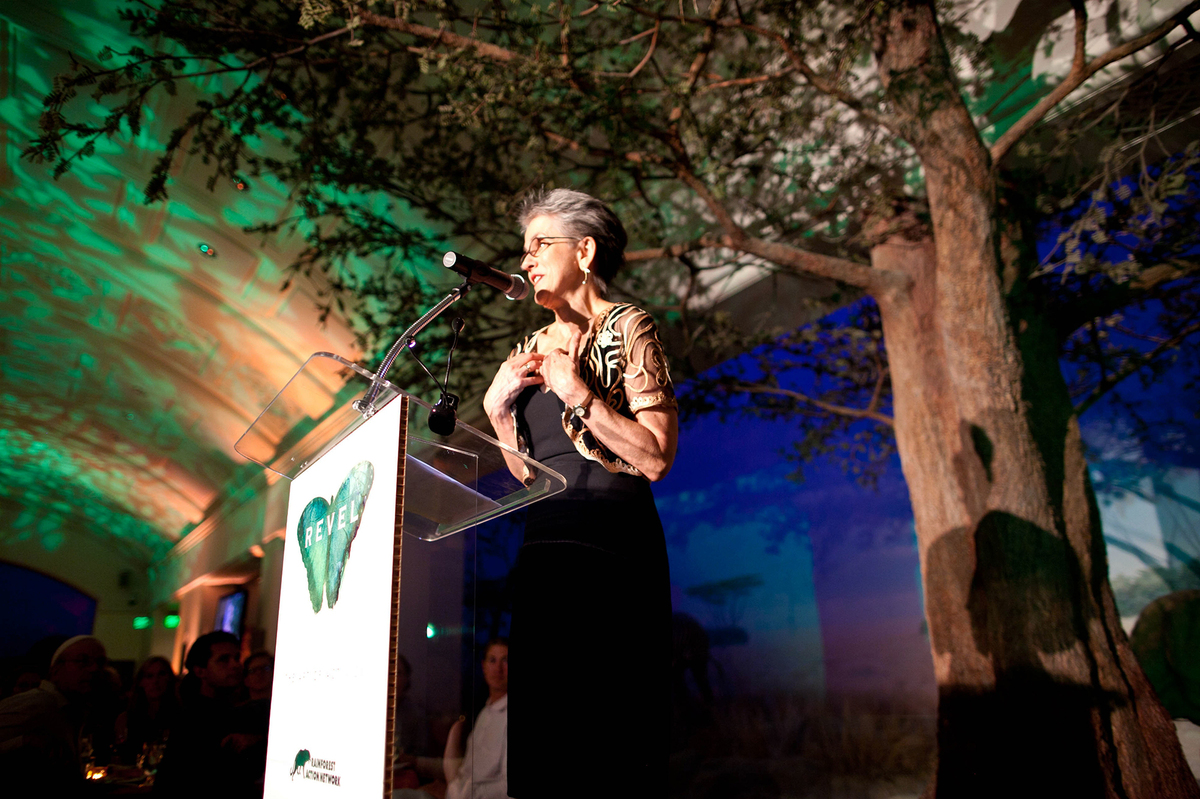 Frances Moore Lappe speaks at a Rainforest Action Network event. When she wrote the best-selling Diet For A Small Planet back in 1971, she helped start a conversation about the social and environmental impacts of the foods we choose.

When Frances Moore Lappe wrote the best-selling Diet For A Small Planet back in 1971, she helped start a conversation about the social and environmental impacts of the foods we choose.

And, back then, what she had to say was revolutionary. Her idea that a plant-centered diet could be better for the planet — and our health — than a meat-centered diet was considered radical. "It was heresy," Lappe told me during a recent interview.

So, what inspired her thinking? Well, let's go back in time a moment. When Americans turned on the evening news in the 1970s, they couldn't escape images of famine.

At the time, some experts were predicting a doomsday scenario. The argument was this: As the population grew, food shortages would worsen.

Back in 1982, Lappe described her thinking during an interview on NPR's All Things Considered. "When I first start looking at these issues, I was very much influenced by the ecology movement ... and metaphors that were telling us that we'd actually reached the Earth's limits to feed people," she said.

But Lappe argued it didn't need to be this way. She pointed out that there were more than enough calories being produced to feed the world. It's just that much of the grain being grown wasn't used to feed people.

"One of the reasons for world hunger was the American demand for meat, which meant that much of the world's grain was going to feed cattle rather than people." This was how NPR's All Things Considered host Noah Adams described Lappe's argument in the 1982 piece.

And as Lappe went on to tell Adams: "So my message was, look, in fact we have this tremendous abundance" of food grown. But "it's the economic and political structures [that] determine whether or not that production is actually meeting the needs of human beings."

For Earth Day, Report Has News To Ease A Meat-Lover's Conscience

Now, remember, back in the 1970s, meat was at the center of Americans' plates. A steak dinner was a symbol of security and prosperity. Nobody was snacking on edamame, and kale was not yet celebrated.

So, when Lappe began promoting a diet rich in vegetables, beans and grains, people were dismayed. "It was shocking," Lappe says, "especially coming from a girl who grew up in cow town, Fort Worth, Texas."

Diet For A Small Planet is filled with vegetarian recipes. Leafing through, I spot one for a spinach lasagna, soy burgers, vegetable enchiladas — nothing that seems too unfamiliar, and definitely not radical, today.

But back then, "people told me their parents said they would die of malnutrition if they followed the advice I was giving in the book," Lappe recalls with a laugh.

Today, lots of us have have heard the arguments about the environmental impacts of meat production. As we've reported, recent studies estimate that it can take 6 pounds of grain and about 50 gallons of water to produce the meat for one hamburger.

And, today, we're also bombarded with messages to eat less red meat, from the Meatless Monday campaign to the World Health Organization's proclamation that excessive red meat consumption is linked to cancer.

But back then, people hadn't begun to connect these dots.

So Lappe used the shock and dismay over her veggie recipes to her advantage. With the buzz her book created, she was invited on to talk shows. The shows all wanted to talk recipes and cooking. But she had a bigger message to deliver.

"I remember when I finally made it on to the [NBC] Today show, [host] Brian Gumbel asked me, 'Ms. Lappe, What did you have for breakfast?' And I went from that question to [explain] the political and economic roots of world hunger."

Lappe has never given up on this work. She's gone on to write many more books, including Food First: Beyond The Myth Of Scarcity. And, along with her daughter, Anna Lappe, in 2003 she published Hope's Edge, which picked up where Diet For A Small Planet left off.

Anna Lappe has followed in her mother's footsteps. When I interviewed them together for this story, the mother-daughter duo could almost finish each other's sentences — even though they sat thousands of miles apart. (Frances was in a studio in Boston, Anna in the Oakland, Calif. area, where she now lives.) They're separated by coasts, but seem very much in sync.

Anna is advocating on a range of issues in the food system. She's written a book, Diet For A Hot Planet, on how agriculture and our food choices influence greenhouse gas emissions and climate change. She's also weighed in on the way snacks and sugary drinks are marketed to children.

Now, among other projects, she has developed an initiative called Voices of the Food Chain, aimed at helping share the stories of people who work in the food system. She is also working with groups across the country on the Good Food Purchasing Program; the goal is to "promote the power of using our public food dollars to create a food system that aligns with the values of fairness to workers, animal welfare, nutrition and health, local economies and environmental sustainability."

Anna says there's still a lot of work to do to promote food choices that are healthy for people and the planet. But she told me she's encouraged. "I think there's been enormous change ... over the last 45 years," she says. She points to the growth of farmers markets, farm-to-school programs, greater access to healthful food in schools and the growth of community-supported agriculture, or CSA, initiatives.

She says one particularly sweet moment for her came last year. Jim Cramer, the popular CNBC host of Mad Money, did a whole segment on "organic cropland for cash." The piece pointed out that sustainably farmed organic fruits and vegetables are becoming more mainstream. And big investors, such as Farmland LP, are converting conventional farmland into organic farmland.

"Most people will tell you organic food is for rich people, that it can't feed the world. Well, guess what? None of that is true!" Cramer intoned in his shock jock style.

Frances and Anna were both tickled by this. "When Jim Cramer is starting to sound like Frances Moore Lappe, I think we can say some progress has been made," Anna told me. "I love it," Frances chimed in.

Frances, now 72, says she is still optimistic. She acknowledges there's still hunger and malnutrition around the globe. But she tweeted out a quote from I.F. Stone earlier this week that read:

"If you expect to see the final results of your work, you simply have not asked a big enough question."