Accessibility links
Ghost Gear: Whales, Sea Turtles, Seals Are The Unintended Catch Of Abandoned Fishing Gear : The Salt An endangered whale was found dead over the weekend, entangled in derelict fishing gear. Such incidents have been on the rise in recent years. A new California law aims to combat the problem. 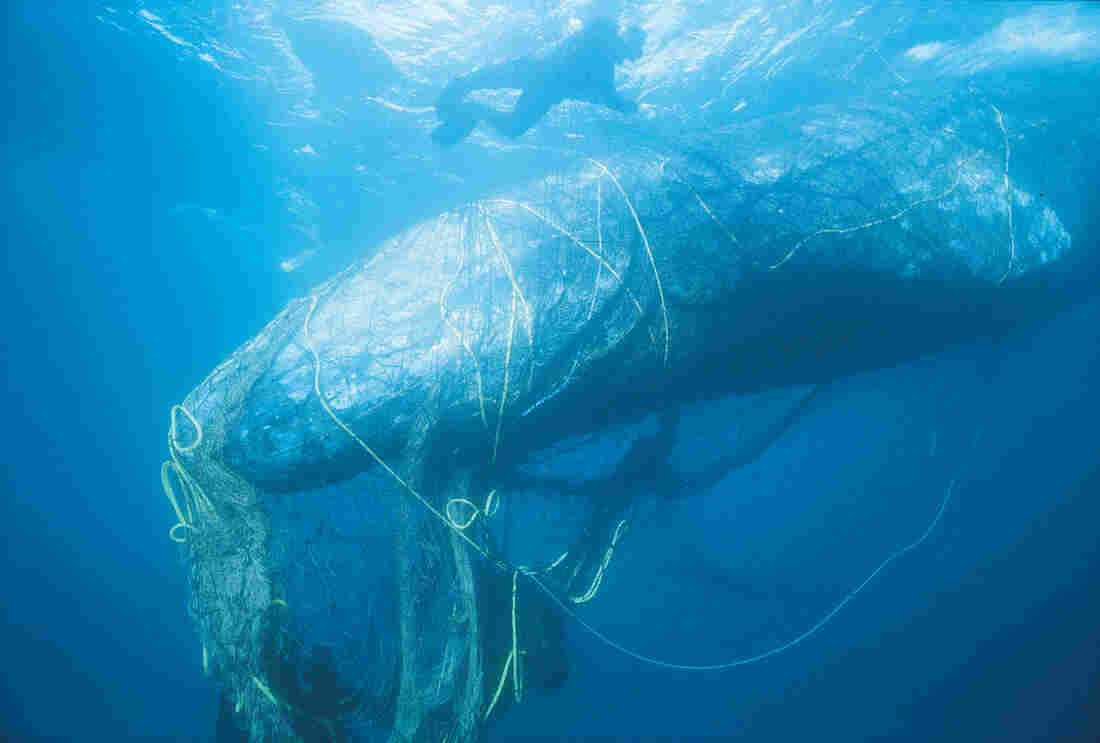 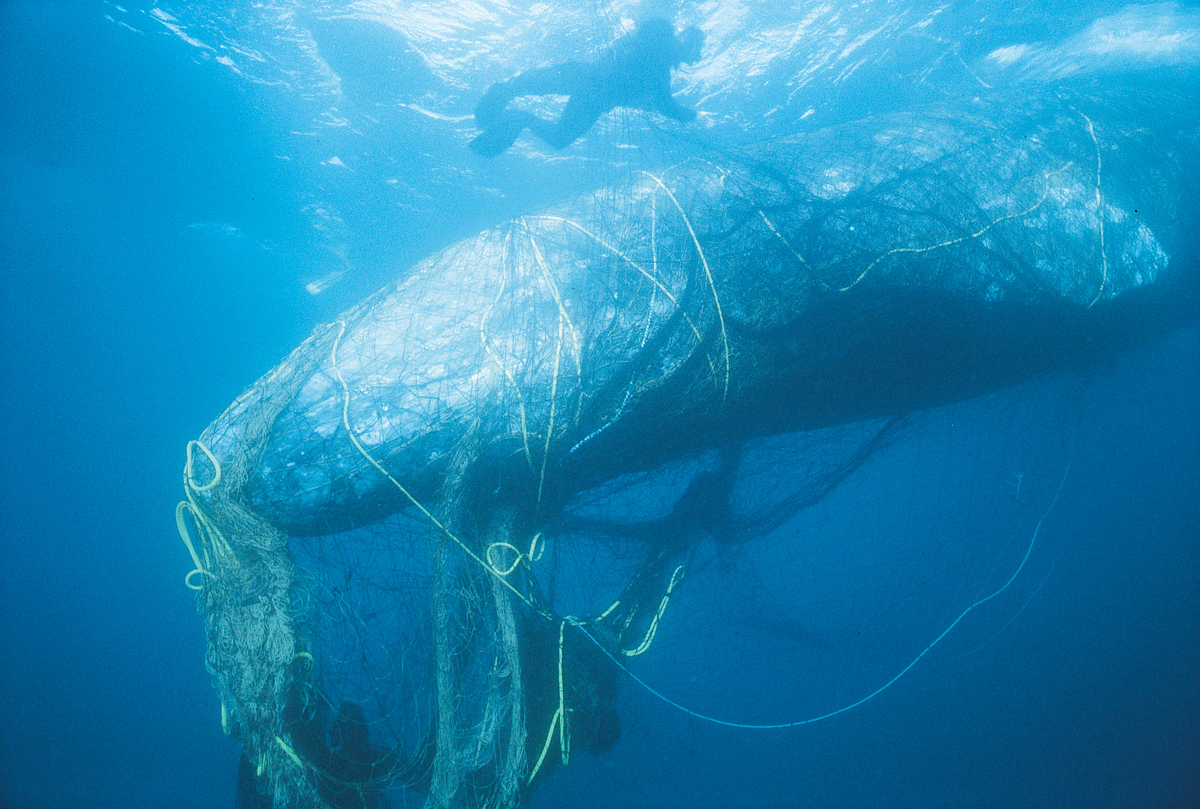 Rescuers untangle a gray whale from ghost net off the coast of California.

There are fewer than 500 North Atlantic right whales left in the world. And now, one less: This weekend, one of the 45-ton creatures was found dead off the coast of Maine, completely entangled in fishing line — head, flippers and all.

This was not an isolated incident.

In late June, an endangered blue whale wrapped in fishing gear was seen struggling off the coast of Dana Point in Southern California. Rescuers were unable to extricate it before it swam away. And earlier this month, rescuers unsuccessfully tried to free an entangled humpback whale near Newport. Spotters say they believe the humpback eventually found its way free of most of the gear, though they're unsure if there's anything still trapped in its mouth.

While any kind of fishing gear can be lost or abandoned at sea, gillnets, crab pots and traps are the most common types that continue to "ghost fish" — entrapping marine animals like whales, seals, sea lions and sea turtles.

Last year, the West Coast saw 61 whale entanglements — a record number that is nonetheless likely to be broken this year. So far in 2016, there have been 60 reports of entanglements as of late September. Why it's happening is unclear. Researchers say there's more derelict gear in the water today, and more reported sightings, but population numbers and migratory patterns of whales have also shifted.

What happens when a whale becomes entangled is grim.

"The gear is really, really heavy and when a whale comes in contact with it, it thrashes around to shed the gear," says Kristen Monsell, an attorney with the Center for Biological Diversity. Sometimes that works; sometimes it entangles the whale even further.

"Sometimes it can drown the whale immediately, or it can happen over weeks, because they get so tired," she says. "They eventually die of exhaustion. If the gear is in their mouths, it impedes their ability to feed. It can amputate their tails or other parts of the body. And for younger whales, the gear may wrap around them, but the whale keeps growing and it cuts into their flesh."

To combat the problem, California Gov. Jerry Brown signed The Whale Protection & Crab Gear Retrieval Act into law on Friday. A first of its kind for the state, the new law is designed to reduce the number of whales caught in fishing gear by creating financial incentives for the state's Dungeness and rock crab fishermen to collect any abandoned gear they find during the offseason. An estimated 40,000 Dungeness crab pots may be lost every year between California and the Canadian border. And that's just one fishery in one region.

But until now, plucking lost gear out of California waters was illegal. 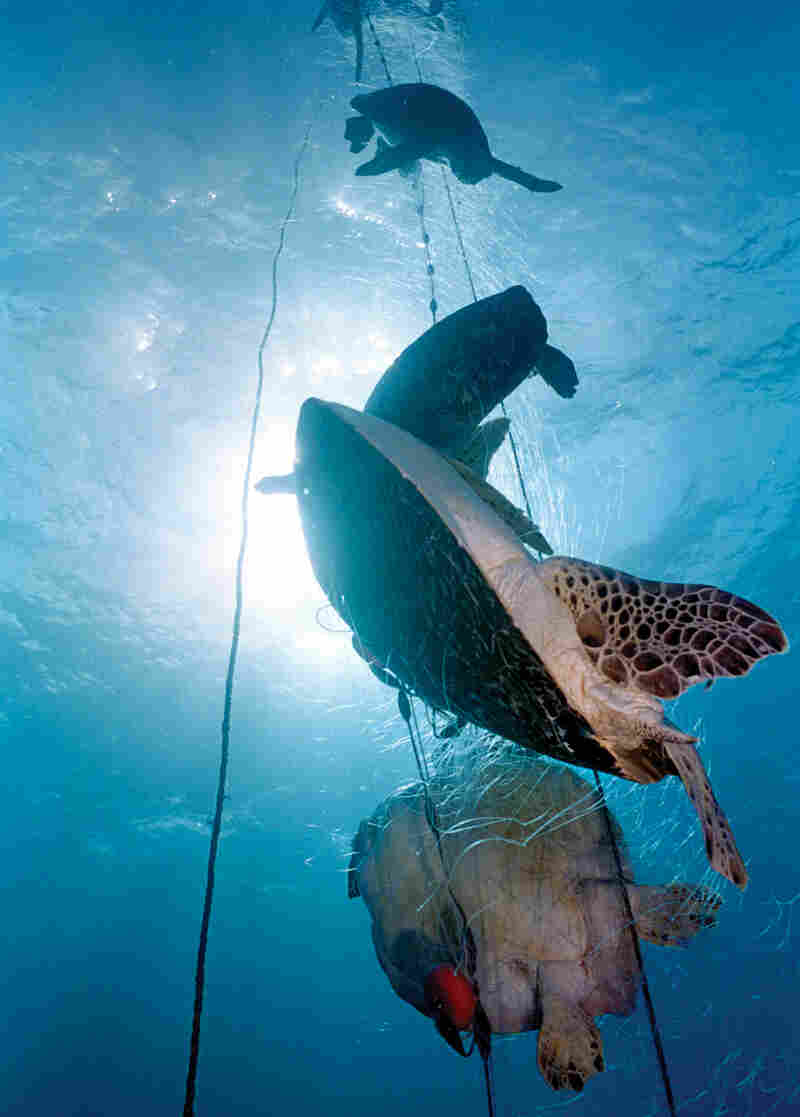 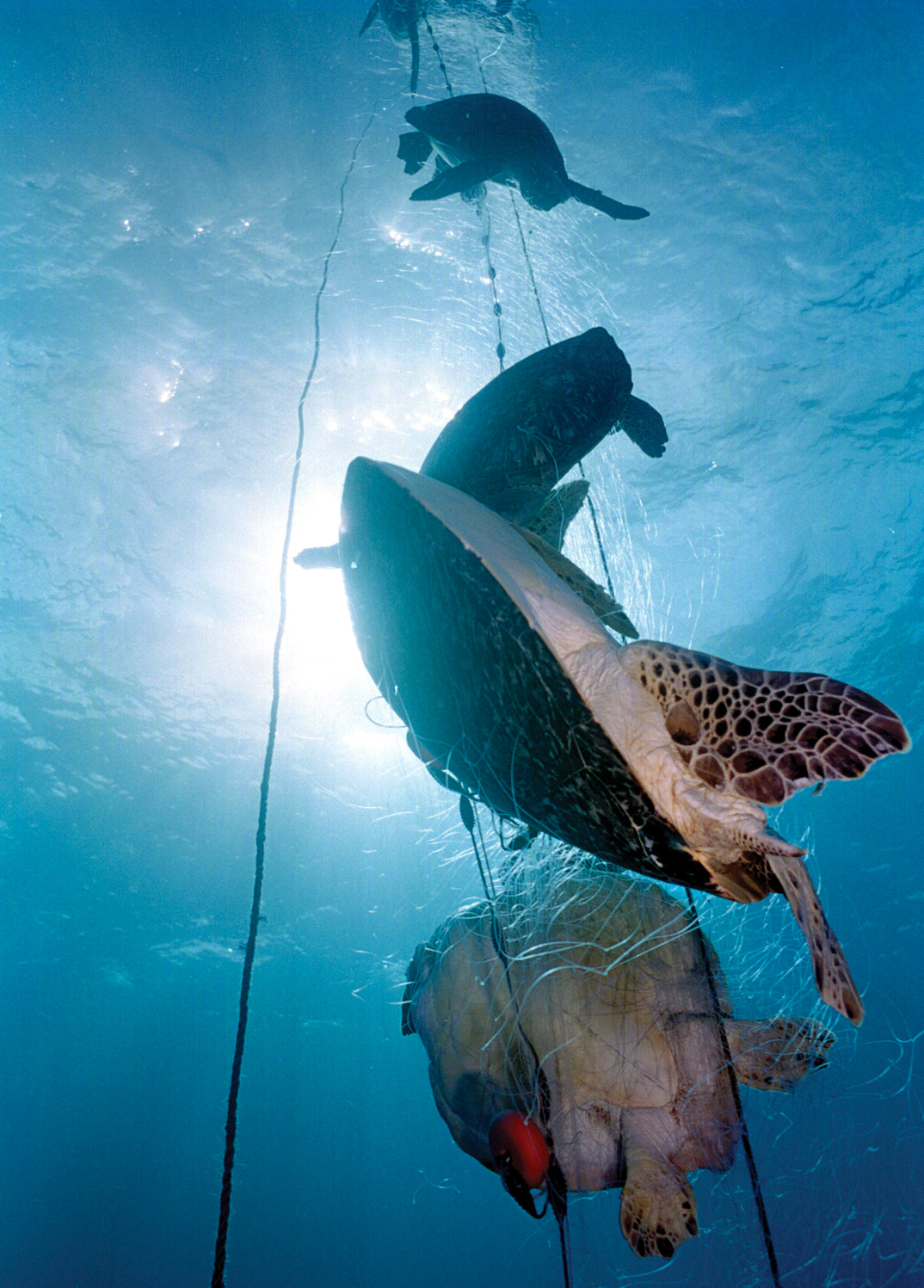 A ghost net, entangling 17 deceased sea turtles, was discovered days after a storm off the coast of Bahia, Brazil.

"There was an existing law that made it unlawful to move, damage or disturb any trap that belongs to another person. And you [couldn't] have gear on your boat outside of the season," says Monsell, a member of the fishing gear group that worked on strategies to reduce whale entanglements.

Unlike many other types of fishing gear, crab pots are traceable to the owner. Fishermen who collect abandoned gear in the offseason will be paid a recovery bounty by the owner who lost the trap. Fishermen who do not buy back their lost or abandoned traps will not be allowed to get their vessel permit for the following season. In California, the Dungeness crab season typically runs Nov. 15-June 30, although last year's season was delayed because of a toxic algae bloom.

"We're doing everything we can," says longtime crabber Larry Collins, president of the Crab Boat Owners Association in San Francisco. "Three or four years ago we got trap limits. No one can throw more than 500 traps. We've decreased the gear in the water, and we're looking at that again."

Washington and Oregon also have postseason recovery programs, but unlike California's, fishermen are allowed to keep or sell the gear they retrieve.

Not all entanglements come from abandoned or lost gear. Whales can be caught up in active fishing gear, too, especially when changing ocean conditions move prey, like schools of anchovies, closer to shore.

"Entanglements are a hard issue. When you have a whale, you don't know if it's active or abandoned fishing gear," says Sherry Lippiatt, California Regional Coordinator, NOAA Marine Debris Program.

The West Coast isn't alone in being a problem spot. It's estimated there are more than 85,000 derelict traps in the Florida Keys, affecting 79 species and killing 630,000 lobsters a year. An estimated 450,000 pots used to catch blue crab are lost each year in Louisiana. In the Chesapeake Bay, where nearly half of all U.S. blue crabs are landed, 160,000 crab pots go astray annually. And according to the environmental group World Animal Protection, of the 3 million lobster pots that go into the water in Maine, an estimated 10 percent are lost each year.

Elizabeth Hogan, campaign manager with World Animal Protection, says that each year around the globe, 640,000 tons of gear is getting lost in the ocean. "It adds up. Very little of it is getting pulled out," she says.

And lost gear has been known to travel great distances. "Colleagues in the U.K. found lobster pots from Maine and Canada on the shores of the U.K. That gear crossed the ocean," she says.

Ghost gear can continue to trap fish and shellfish — and impact the health of a fishery. In the Chesapeake Bay, researchers found that removing just over 34,000 derelict pots allowed the fishery to harvest an additional 13,500 metric tons of crab worth $21.3 million. 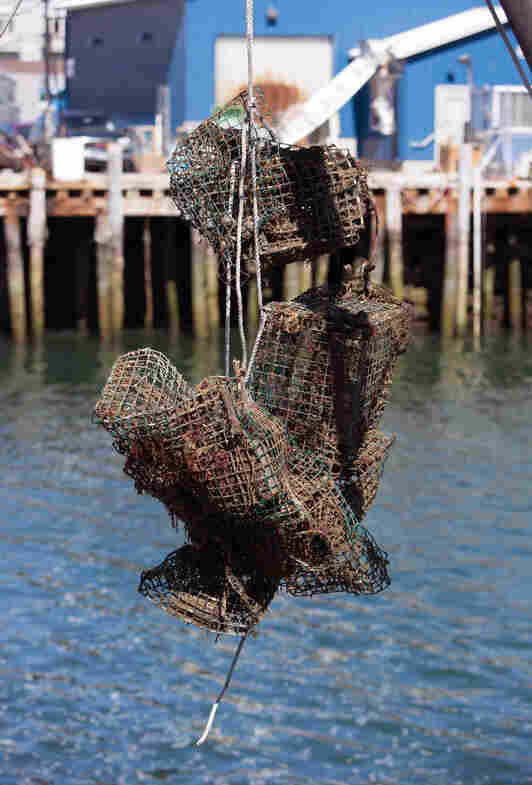 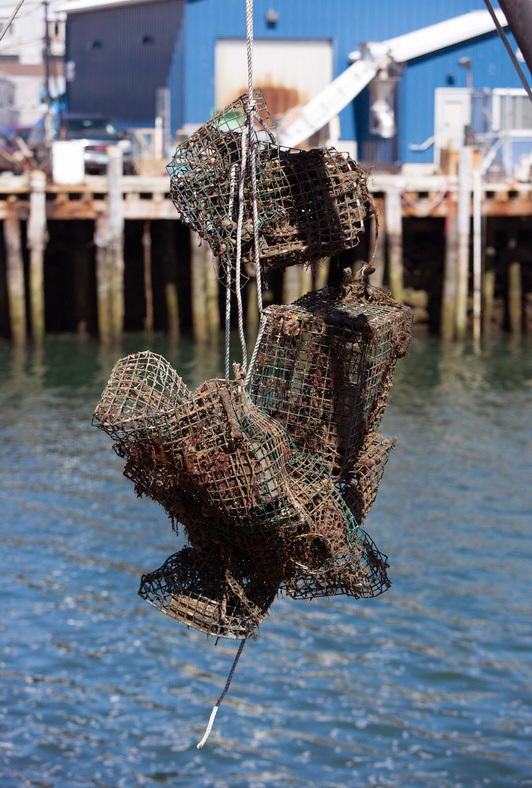 World Animal Protection and the Gulf of Maine Lobster Foundation, in partnership with local fishermen, removed ghost fishing gear off the coast of Portland, Maine.

There are other financial incentives to getting abandoned gear out of the water. Influential groups like Seafood Watch take ghost gear into account when rating a fishery if there's strong evidence that it's a problem, while the Marine Stewardship Council's certification includes criteria on effects from gear loss.

Chelsea Rochman, a professor at the University of Toronto who studies ocean debris, including derelict fishing gear, says that while the new California legislation is helpful, she's not sure whether it will ultimately save whales.

"In terms of marine debris and derelict fishing gear, it's a first step. But what's special about this law is that the fishermen are on board. It incentivises them to pick up their gear," she says. "I think it's a great first step."

Collins says that's because fishers had a voice at the table when the working group first sat down to address the issue.

"We're trying to be proactive and get ahead of this. Now, at the end of the season, we can pick up the gear and get it out of the ocean, because we love whales like everyone else," says Collins.